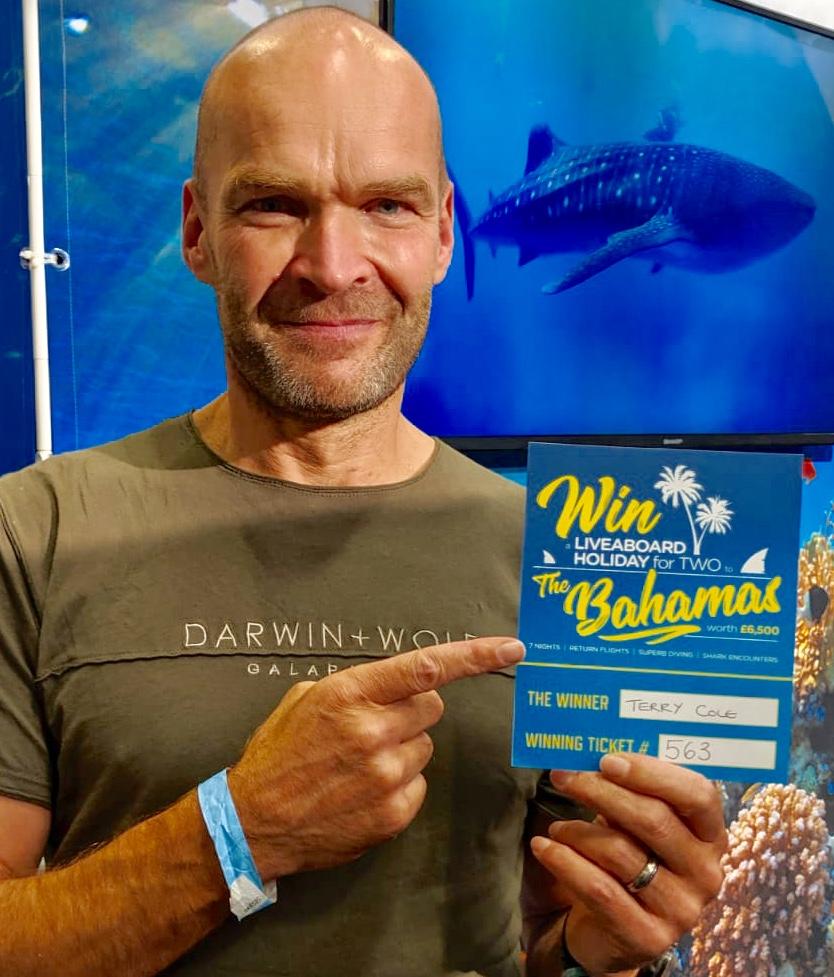 Car and coach mechanic Terry Cole, 58, from Northampton is looking forward to jetting off to the Bahamas for seven nights on board M/V Bahamas Master for just £10, after scooping the top prize in a lottery competition run by Blue O Two to support Bite-Back Shark & Marine Conservation.

While more than 880 tickets were sold for a chance to secure the £6,500 trip of a lifetime to the Bahamas on a shark and dolphin safari, there could only be one winner.

TV presenter and expedition leader Monty Halls revealed the winning ticket, and Terry said: “When I found out that I’d won, I could barely believe it. It’s a dream come true. I’ve been diving for nearly 15 years but never in the Bahamas. I’m expecting some buddies to let me know they’re free to join me next August.”

But Terry was quick to say that they’d be out of luck. Instead, he’s decided to take his wife, Sue, on the trip. Although she isn’t a diver, Sue is looking forward to snorkeling on the reefs and relaxing in the luxurious surroundings of the Bahamas.

Laura Greenland, Marketing Manager for Blue O Two, said: “This competition has been so much fun. Not only does it clearly mark the Bahamas as a bucket-list destination, it demonstrates that our passion for supporting sharks and marine conservation is matched by our clients. Everyone at Blue O Two is excited for Terry and Sue – and a little bit jealous too.”

Terry is a veteran of Blue O Two holidays, having dived with them on several occasions in Egypt.

Graham Buckingham, Campaign Director for Bite-Back, said: “We’re truly grateful to everyone who took part in the competition. Each ticket sold has helped to move our campaign plans for 2020 forward and sustained our commitment to making Britain the first country in the Western world to ban shark products.”