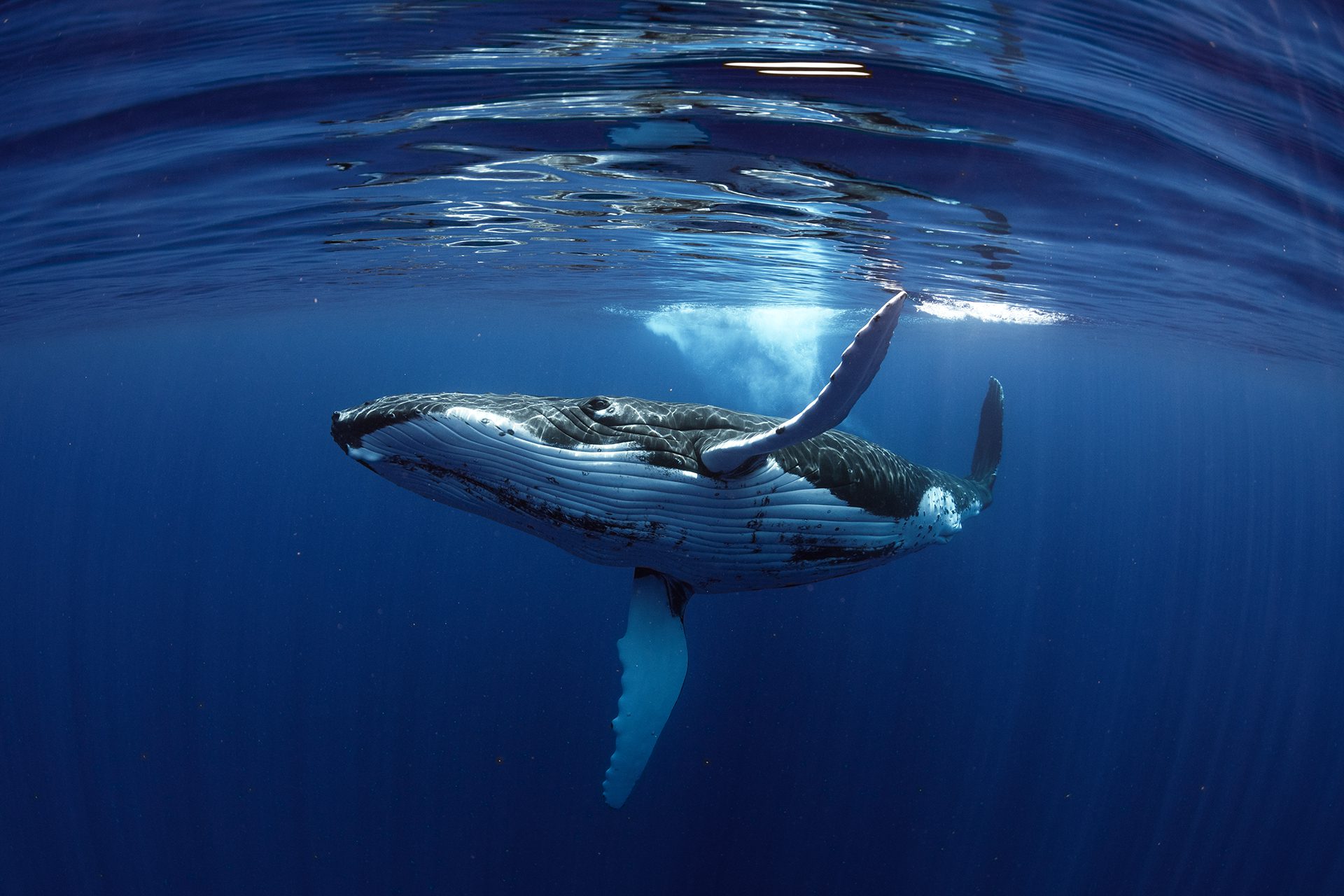 Swimming with the gentle giants of Moorea. 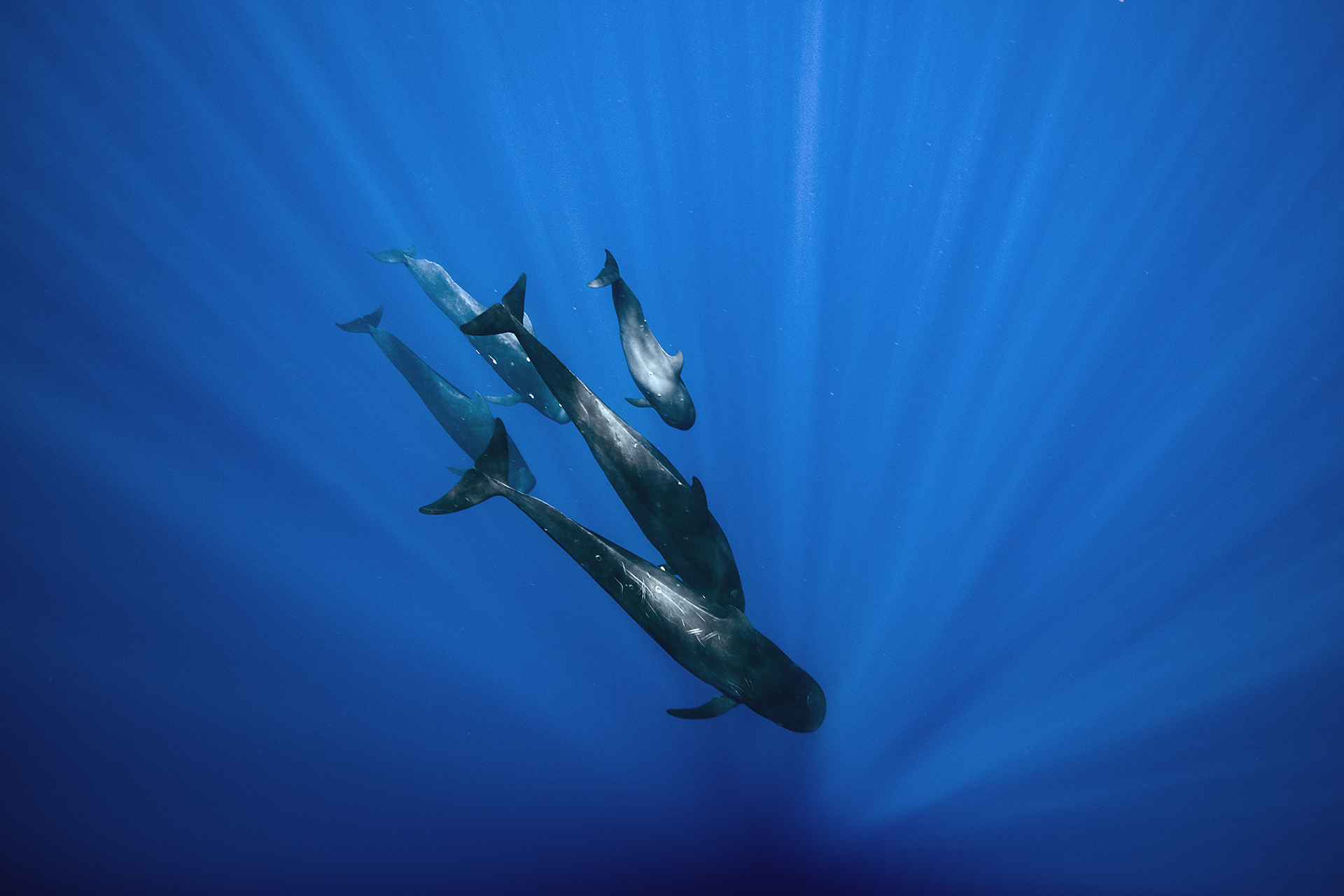 It's sunrise, you wake up and get up swiftly. The musty smell of the forest, the salty air from the beach and the birds chirping in the morning create an atmosphere that awakens your senses. There’s an overwhelming uneasiness, tenseness in your being, the uncertainty of whether or not you will be able to see those giants penetrates you.

Once at the dock you get on board, the breeze begins to caress your face and your gaze becomes fixed to the horizon. One has to wait, sometimes for hours before you can encounter one of them, and then suddenly a blast! A large blow expelling from its blow hole. Your body is paralysed, you’re in awe and magic appears before you. 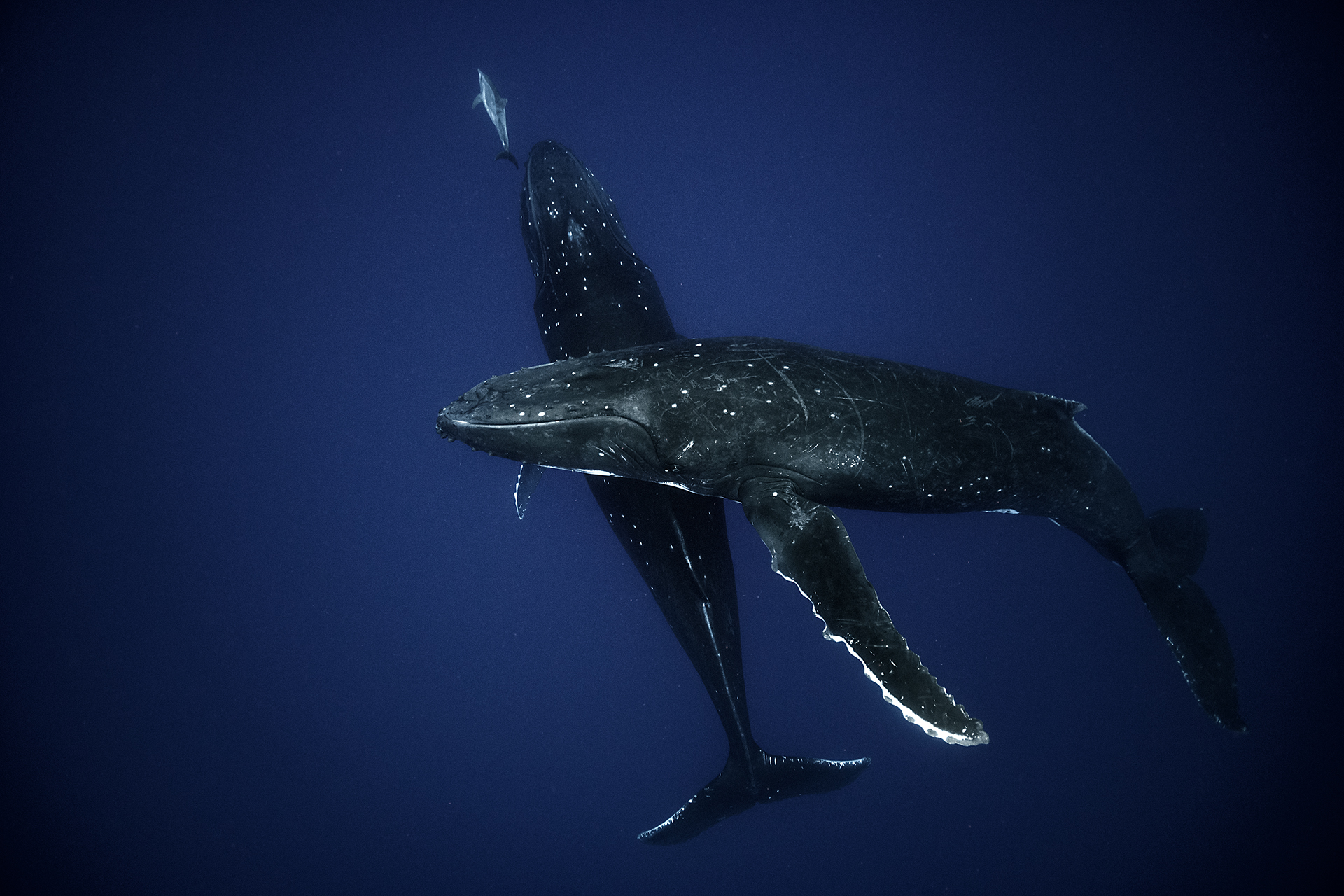 The sound that these giant mammals make when they exhale out of the water is so overpoweringly loud that you can notice how it rumbles in your body. A jet like a trail of three metres expels from its back forming a shape of a heart, light beams through its path and a splinter of a rainbow appears. A gift from nature.

While the boat sails parallel to the course of the whales, fins, mask, snorkel in place, hanging outside the boat, you hold the camera firmly in your hands, waiting for the right moment to jump into the water. It is essential to swim one hundred metres away from the boat in order to respect the whales, the giants, as a result, the adrenaline begins to kick in and to spread throughout your body. 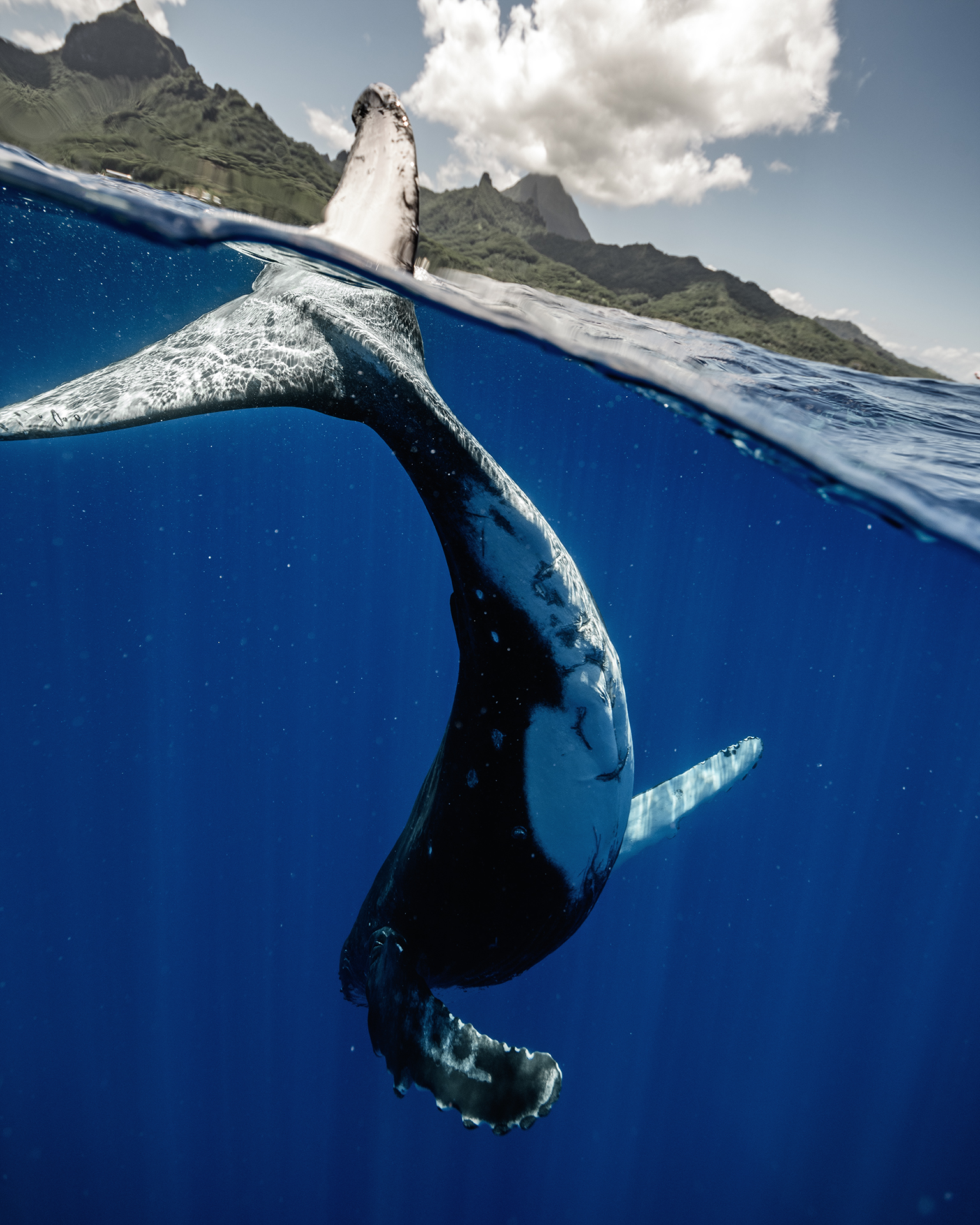 Then you jump into the water. Everything is blue. An intense blue in which the rays of the sun invite you to dance with them towards an endless depth. Nonetheless, you must not get caught up by this hypnosis, your arms are absent due to the camera thus you must keep kicking your legs whilst your heart pumps tirelessly so that you can reach your destination.

Their silhouettes appear in the distance and everything is a blur for a moment, until the giants decide to initiate contact and to see what and/or who you are. You become spellbound, captivated with what rests in front of your eyes and once again time stops before you. 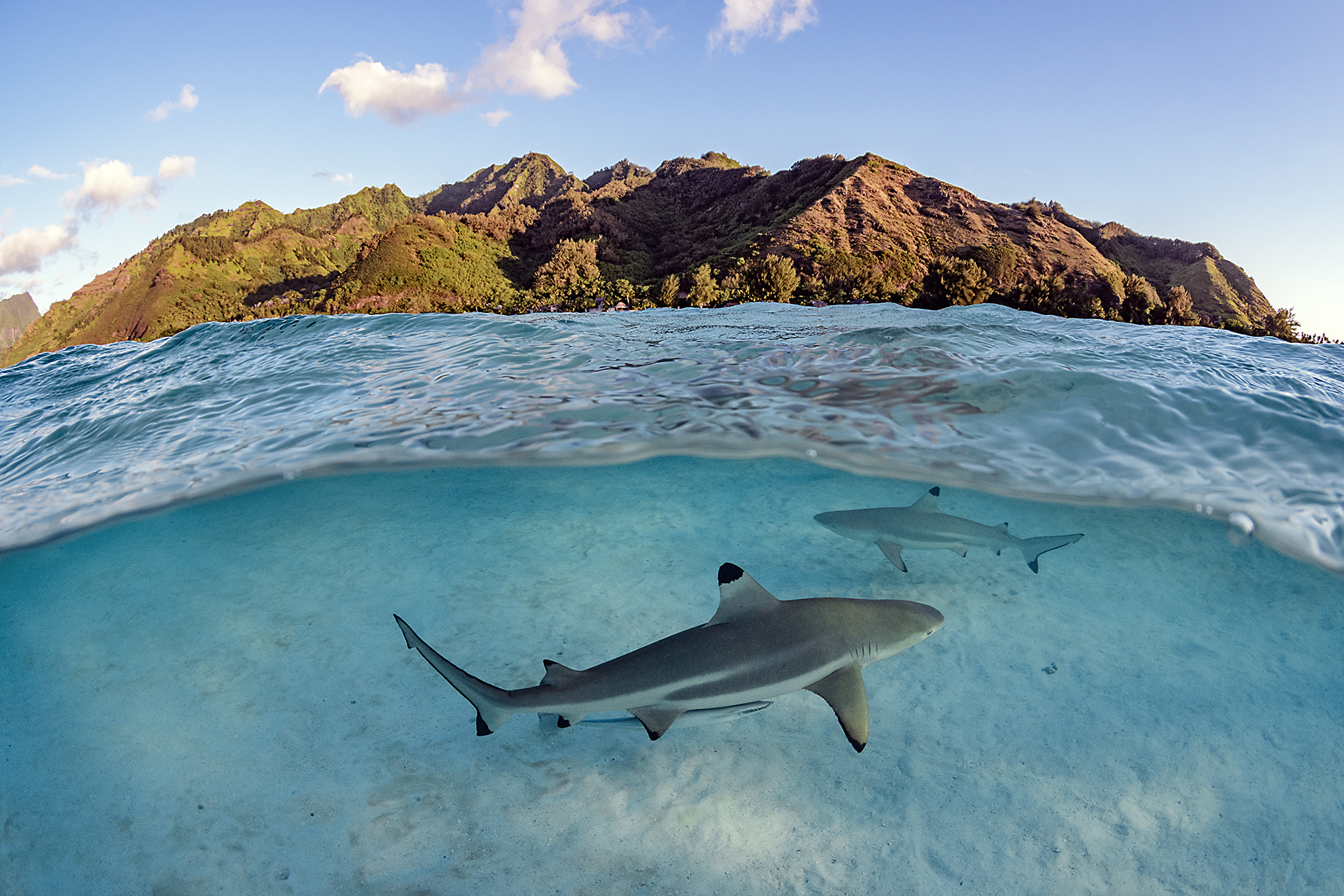 Moorea is a South Pacific island, which has a volcanic origin, and is part of French Polynesia. It is characterized by its rugged mountains, its equatorial climate, its sandy beaches lined with palm trees and pertains the cleanest and most graceful starry skies I have ever seen.

On the island you can find several lookouts with striking views, you can do a lot of hiking and visit some of its waterfalls, in addition to visiting its beaches. You can also do a large number of water activities, such as surfing, kite surfing, kayaking, jet skiing or simply taking a boat trip to visit the blacktip sharks and stingrays that reside in the lagoon. 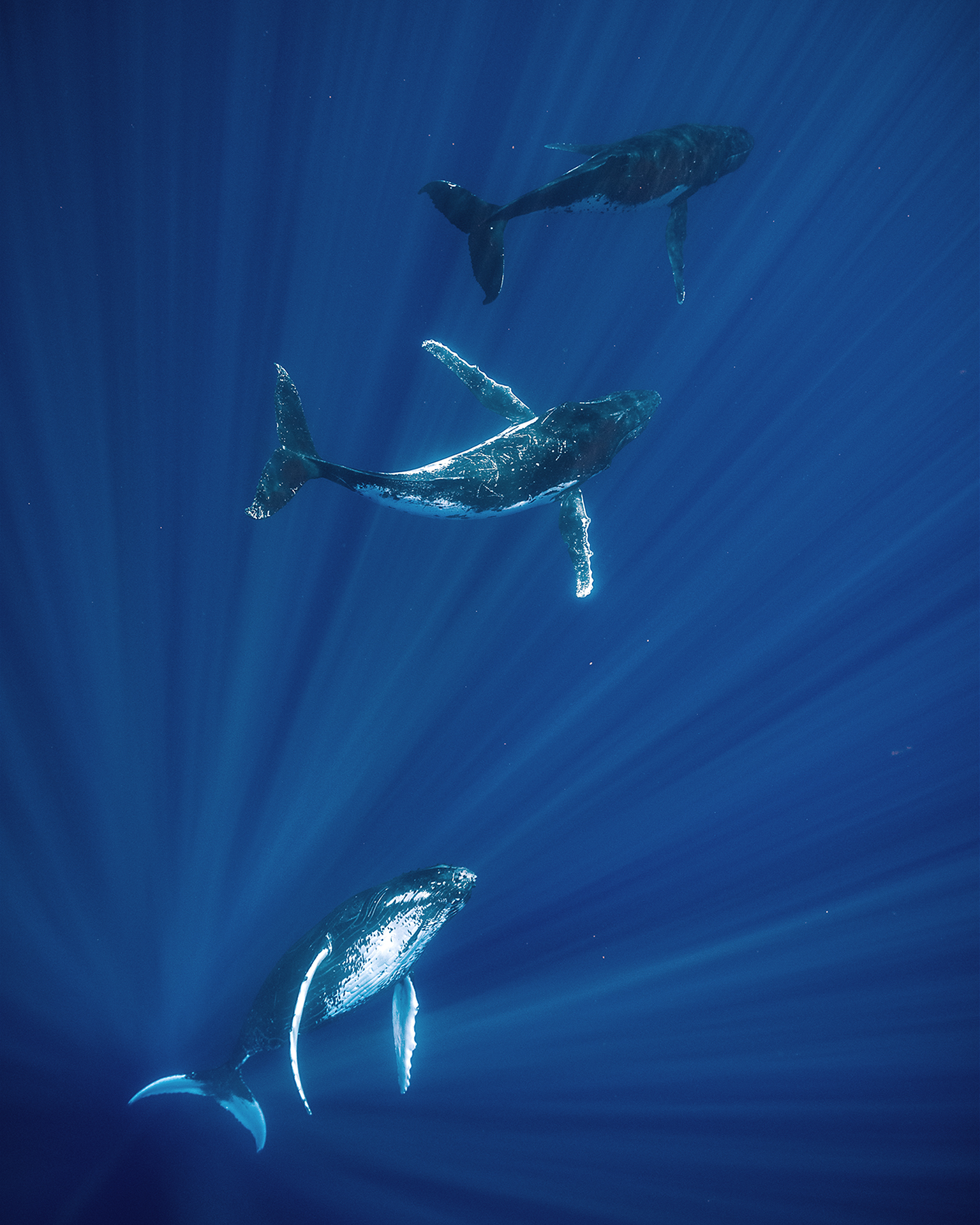 Nevertheless, the true secret of Moorea lies beneath its waters. Apart from tropical fish, corals, turtles and sharks, during the months of July to November humpback whales come to its shores for mating, to give birth and take care of their calves before embarking on their extensive journey to Antarctica.

The best way to reach this fantastic island is by flying to Tahiti. After arriving to this destination, you are able to spend the evening and catch a ferry in the morning to the island of Moorea. Here you are able to find several hotels, resorts and villas to settle in. In addition, there are numerous companies available that are able to provide you with the experience of whale watching. 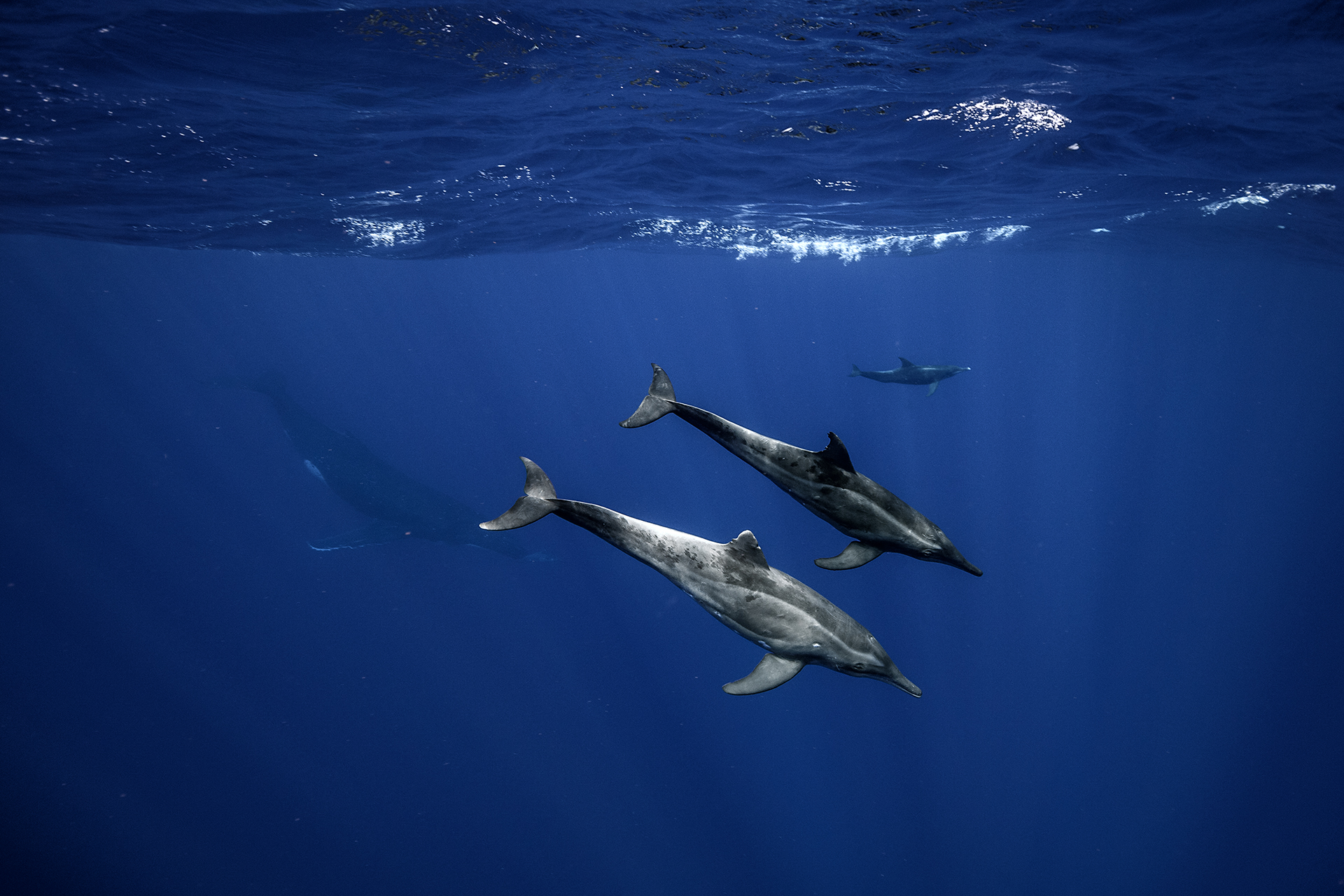 Unquestionably, my recommendation is to choose private trips, whereby the group and yourself can have a much more peaceful and private experience in the water with the whales. In this fashion the whales are respected and not disturbed within their natural habitat due to the reduction of overcrowding tourists.

Tahiti Shark Expeditions is a company with many years of experience whom pertain a lot of expertise. Their respectful practices have been operating since 2004 and do not only offer whale trips but also offer diving trips throughout the year. 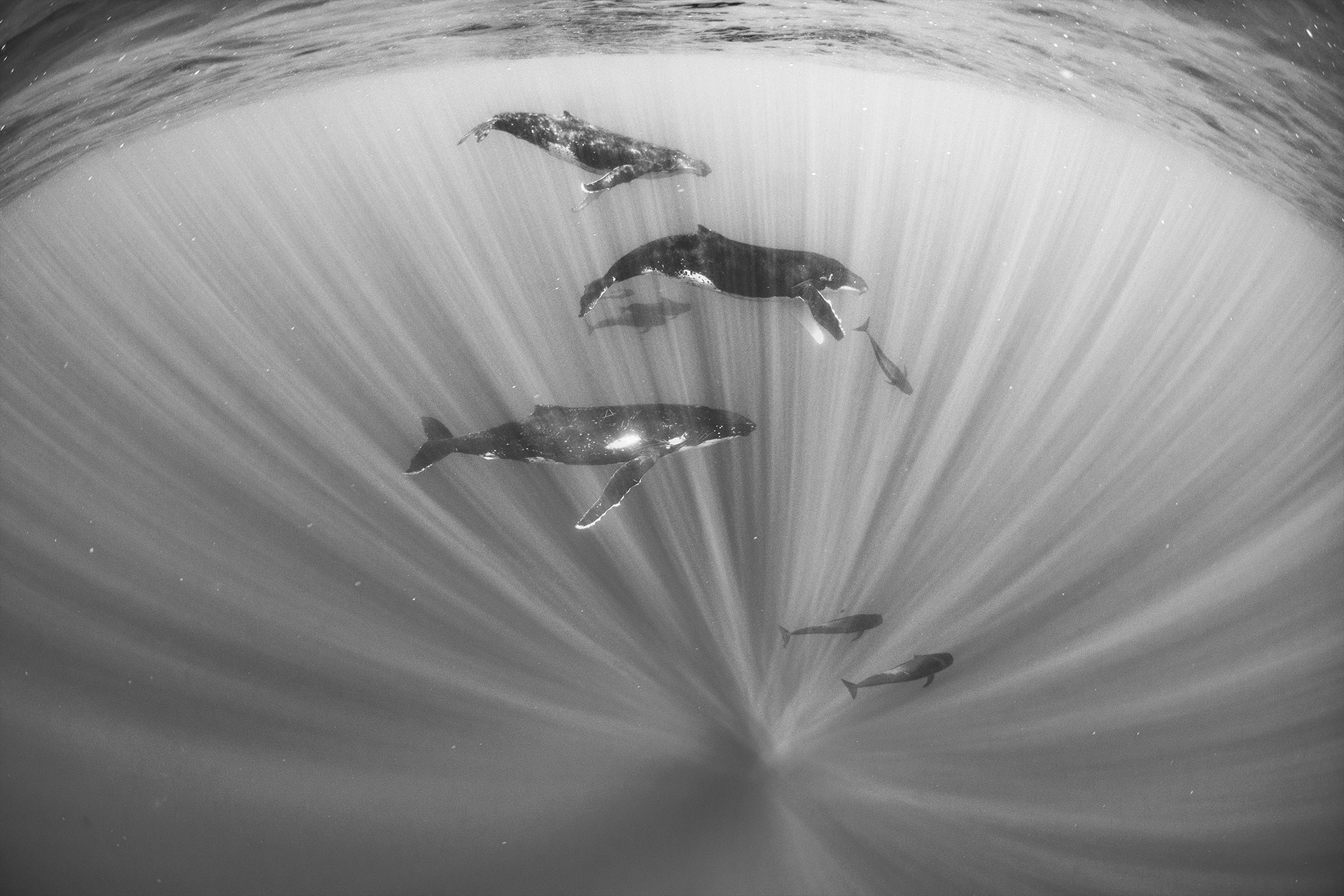 With respect to the wide-ranging trips offered, the full day trip includes a fantastic menu. The Poisson cru, a typical delicacy from these islands which contributes to local and sustainable fishing, also known as Tahitian salad, similar to the Latin American seafood dish, Ceviche, it is made of raw fish that is marinated in citrus juice and coconut milk and accompanied with salad and rice. Whilst you taste this meal in the turquoise waters of the lagoon you find that your batteries begin to recharge, your eyes fall to the mountains and you find yourself in a harmonious and blissful state.

During the months of July to November the whales that we can observe in Moorea are the humpback whales. Although there is a non-profit organization, OCEANIA (in charge of the study and protection of whales in French Polynesia) who has recorded the first sightings in May. Their scientific name Megaptera novaeangliae meaning “the great wings of New England”, refers to the hypertrophy of their pectoral fins and the region where they were first observed and described. 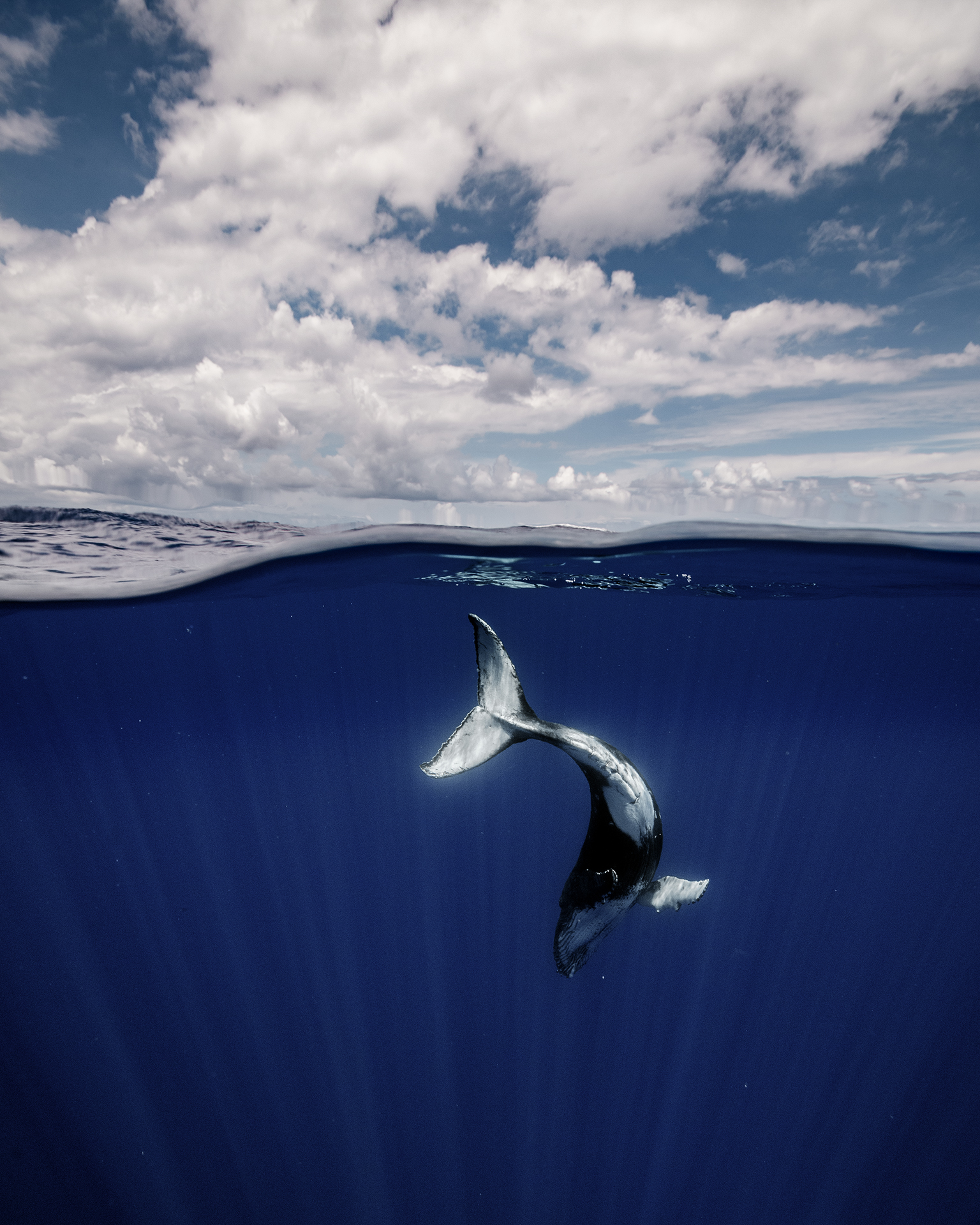 Every 2-3 years, females give birth to a calf. Newborn calves are around 4 m tall and weigh between 700 kg to 1 ton. They drink about 300 litres of milk a day, which means that they will gain about 60 kg a day. They will reach sexual maturity between 5 and 10 years. The humpback whale frequently dives in the 50 m zone for an average of 15 minutes. In Moorea, the maximum apnea recorded has been 40 minutes. Breathing is an act of mindfulness for cetaceans and each breath renews up to 90% of their air. The maximum depth recorded was 616 m and was observed in New Caledonia. 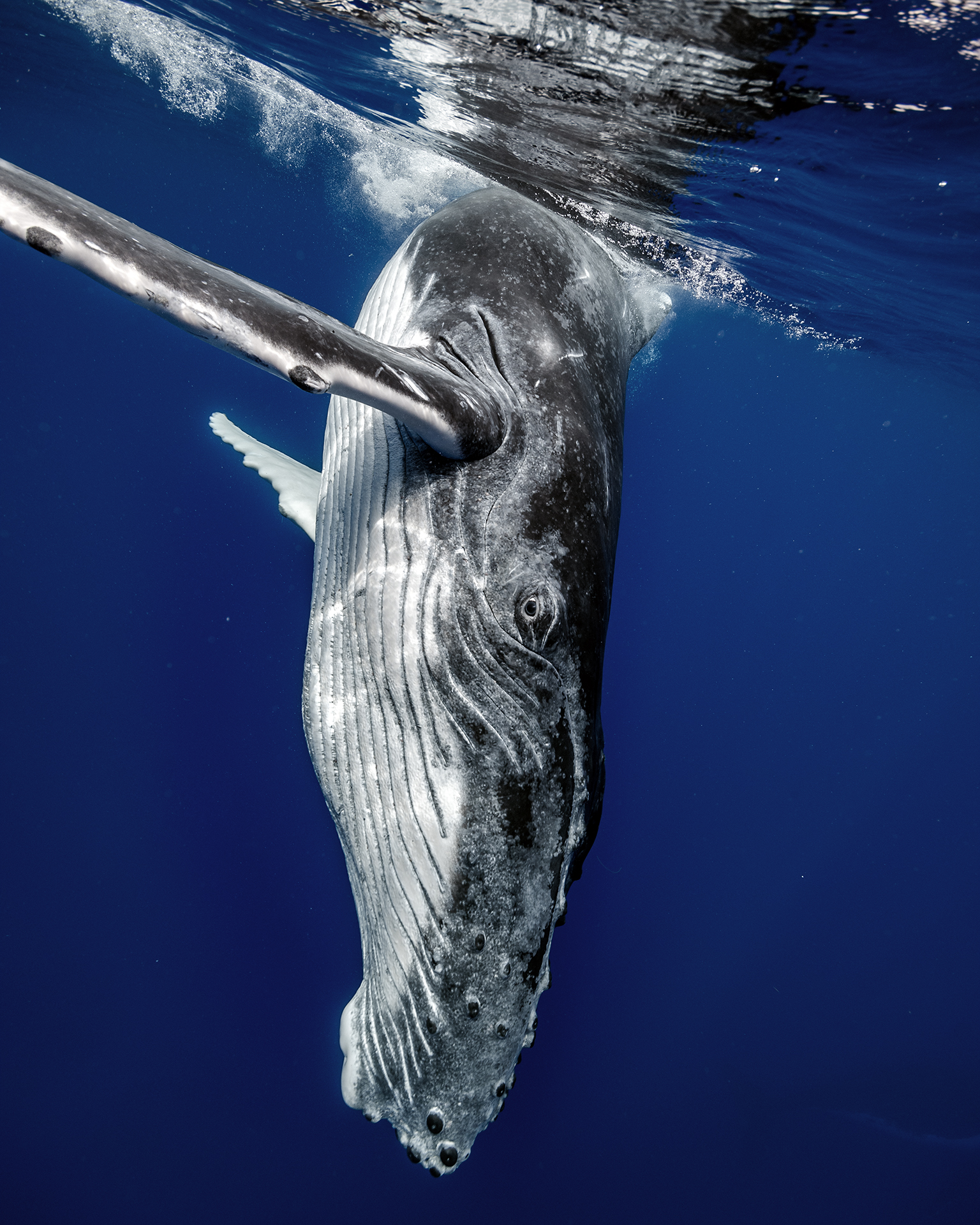 In regards to migration, the humpback whale arrives from Antarctica (its feeding ground) to give birth, mate, suckle its young or rest. The presence of singing whale males, active groups of whales on the surface, and the observation of mating and newborns attempts confirms that French Polynesia is a breeding ground and nursery for humpback whales in the southern hemisphere.

The humpback whale is rather solitary or  lives in small groups, between two to four. Frequently they are observed 2km from the coast, thus they develop near the barrier reef and sometimes occasionally near the bays. 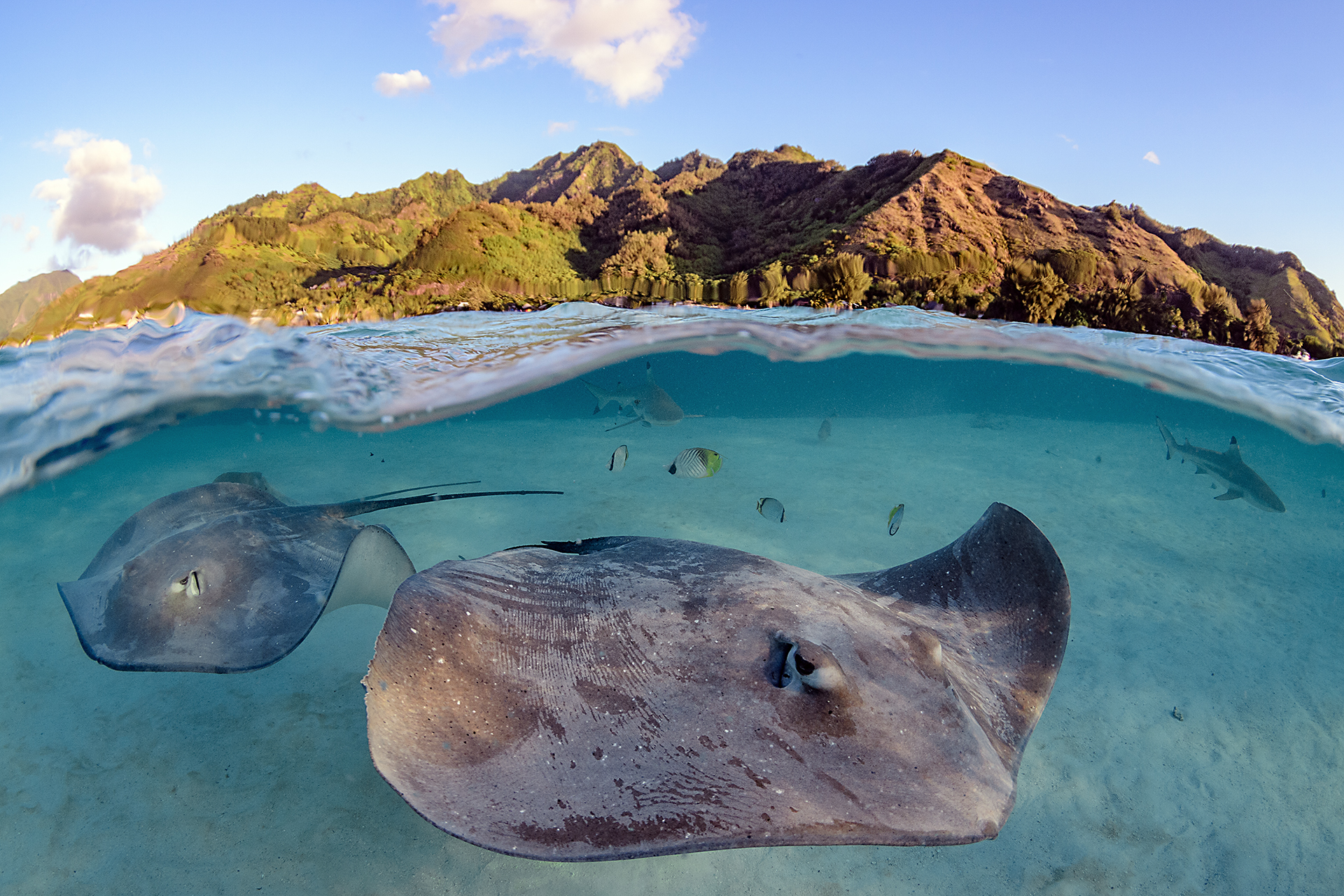 It is quite common in the area to see groups of two, three or even more whales accompanied by herds of pilot whales or dolphins. Their young, who play, interact and communicate with each other offer one of the most wonderful natural shows that I have ever been able to witness. Following the pilot whales, oceanic whitetip sharks wait patiently for their next bite. I have even seen a whale shoo away one of these sharks with its tail, which came too close to a mother and a pilot whale calf.

A study conducted by Garland et al. (2011) highlights the notion of “horizontal cultural transmission” in humpback whales, i.e. an individual could transmit cultural information, such as singing, to another whale without being part of its offspring. Thus, in three years, there has been a cultural transmission of a part of the humpback whales' song from Australia to the whales present in French Polynesia via New Caledonia and then Tonga. 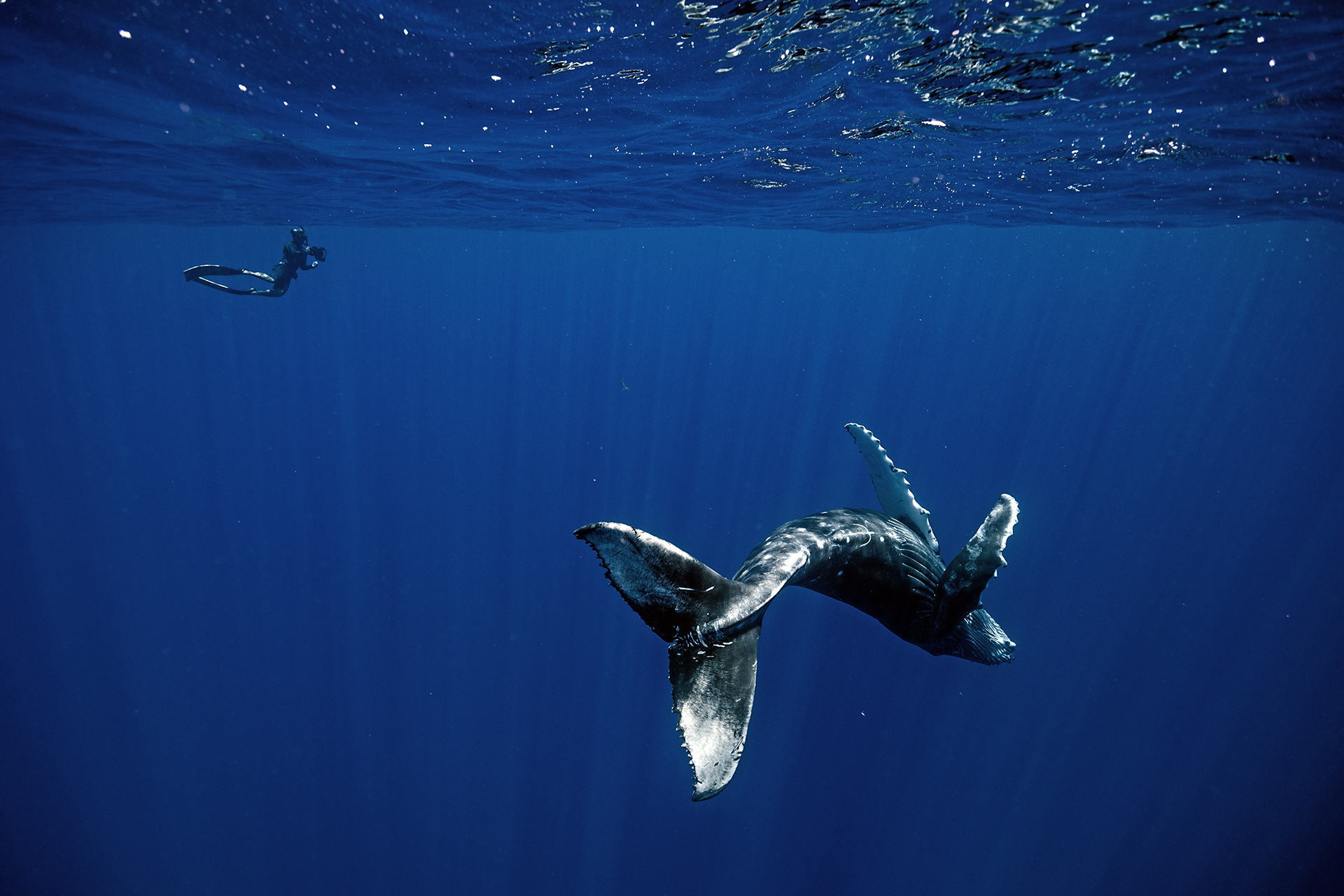 In French Polynesia, the song of the whales is unique. It is specific to the region. Ancient genetic isolation, restricted migratory exchanges, and the presence of a unique song are the three proofs that the humpback whales of French Polynesia constitute a distinct breeding population.

The sensation of being in the middle of the ocean with these vast, sentient and smart creatures is one of the best gifts that nature can offer you. When one hears the songs emitted from the male whales, a vibration strikes and a tremor moves throughout your entire body. It is as if a song was pulsating inside you and undoubtedly is an unforgettable experience. 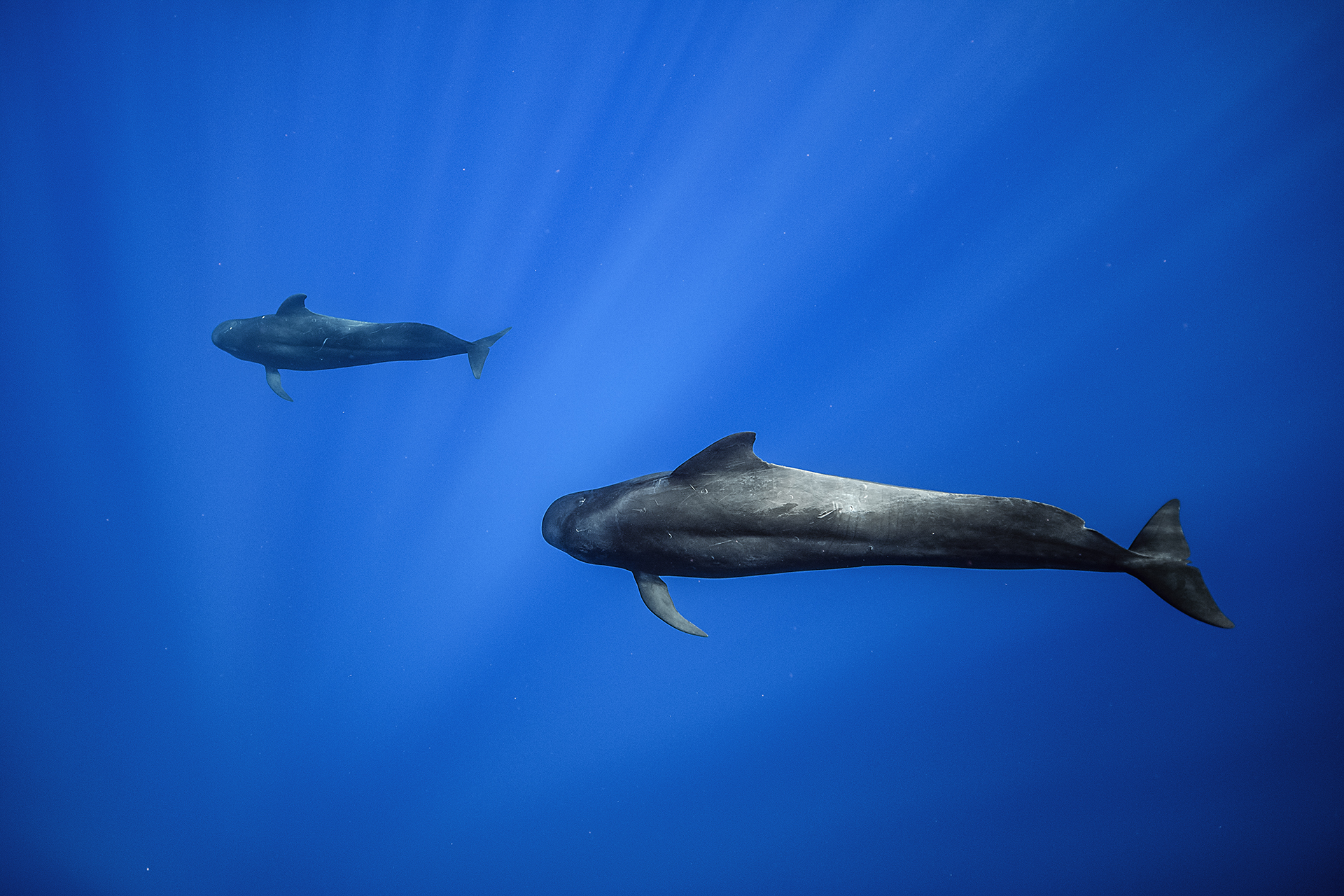 Suddenly, one of these giants approaches you, they begin to observe you and you can feel their intense gaze travel along the spine of your body. It begins to contemplate and stare and time stops. Something within you roars, and you begin to feel something indescribable. This is the moment when you realise their intellectual capacity and their empathy. A fragment in time where you become conscious of the fact that life has depths that are unfathomable.

However, the existence of these animals is threatened by numerous factors. These factors include: hunting, collisions with ships, pollution, plastics, global warming, and so on. Fortunately, OCEANIA identifies these threats and creates conservation strategies in this sanctuary, Moorea, in French Polynesia. 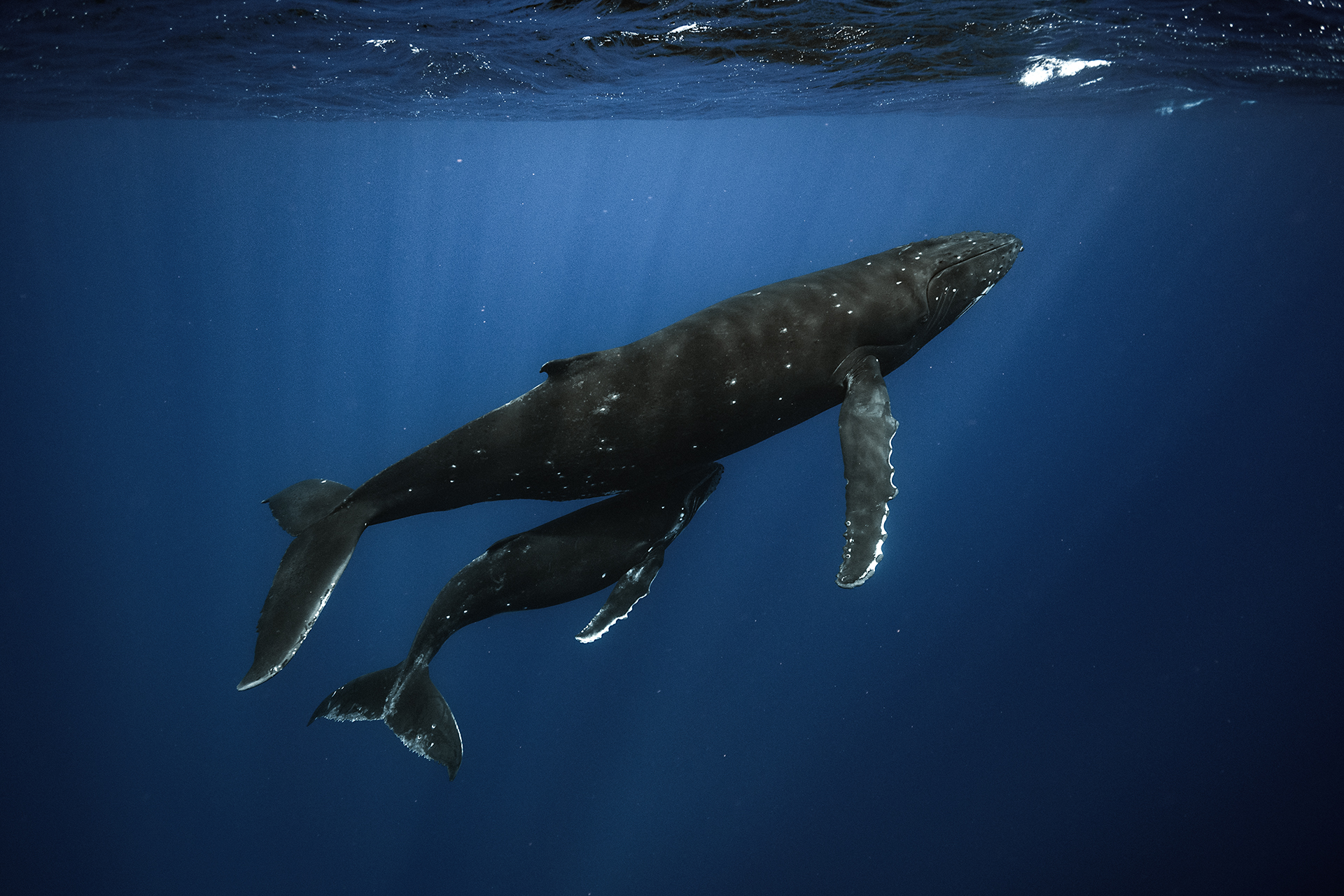 This organization studies and protects these cetaceans in the area via observation, recording behaviour and perform population estimation via the use of photographic identification.

In addition, they work with ferry companies within the area to avoid collisions. One of the association's flagship projects is called Vigie Sanctuaire, a scientific program in French Polynesia that aims to limit the risk of collisions between humpback whales and high-speed boats on the Tahiti Moorea route. In 3 years, more than 300 of these collisions have been avoided thanks to the collaboration between the captains and the association.

Undeniably, after many years traveling and diving around the world, Moorea is one of the most magical places I have ever been to. Thus, do not hesitate, pack your suitcase, and come to Moorea!