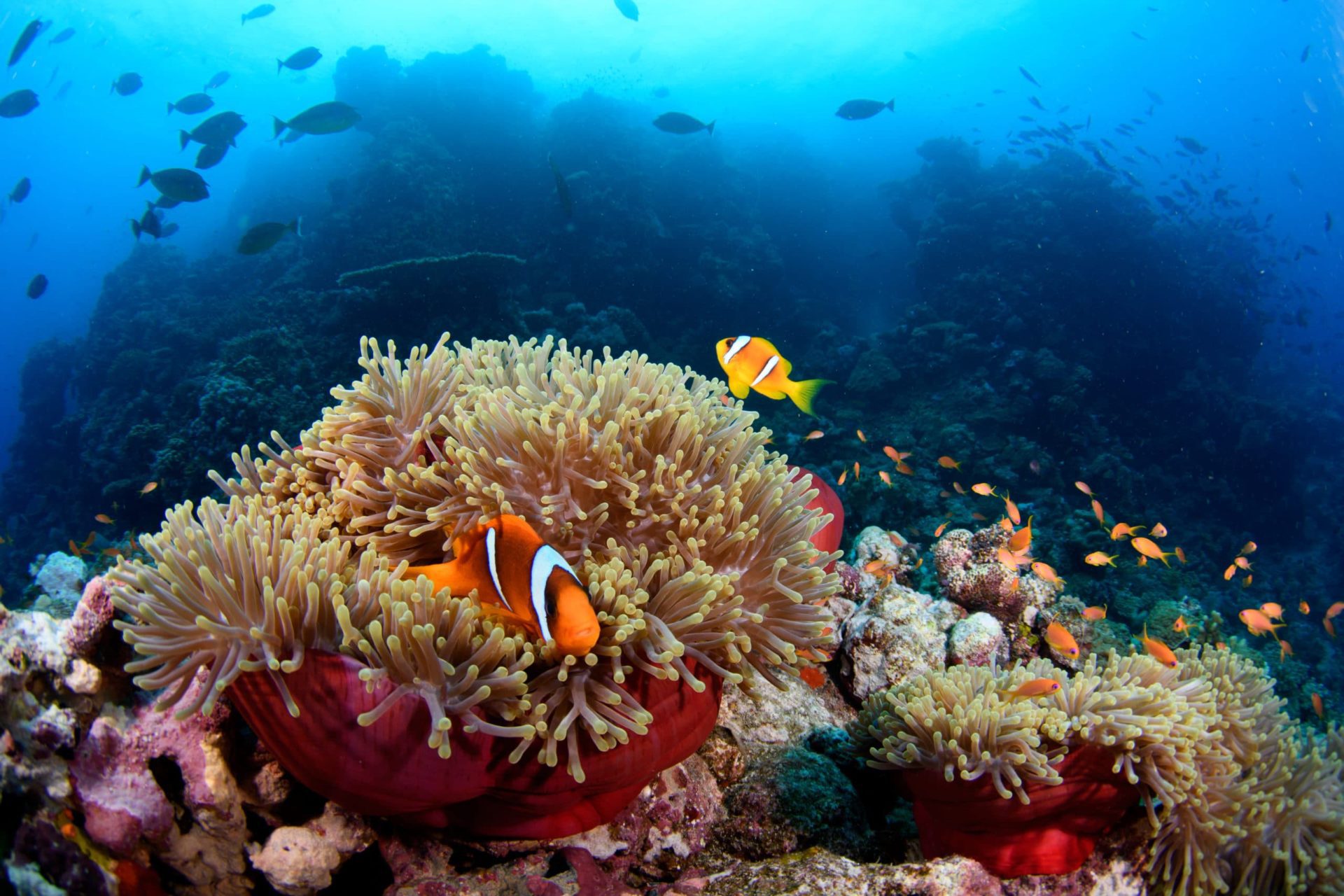 The Egyptian Red Sea holds some of the worlds’ most dived and photographed coral reefs and wrecks. Many divers would instantly recognize photos of the motorbikes inside the SS Thistlegorm, the shape of the Giannis D cargo ship, and some photographers affectionally name the color of the water you get there “red sea blue”. This has to do with the ease and affordability of travel there: Egypt has long been a very touristic destination (think pyramids, romantic cruise on the Nile river…), no wonder they have been very good at welcoming another type of tourists: scuba divers.

Inevitably, with so many divers visiting, the reefs closest to shore aren’t as pristine as they once were, and in general, I had been hearing “Egypt nowadays isn’t as good diving as 30 years back”. I had also heard “but if you are able to travel to Sudan, you will see what Egyptian diving used to be like!”. Extra research taught me that:

Needless to say, Sudan was high on my diving bucket list. We started our cruise with some relaxed yet fascinating diving at Shaab Rumi reef, 35km away from our departure port (Port Sudan). This is the very place where the inventor of scuba regulators, Jacques Cousteau, submerged several scientific habitats and tools at various depths, creating a mini “underwater village”, to support the “Précontinent 2” experiment, in 1963.

On the sandy plateau at 10 meters depth, Cousteau had installed a habitat called “the Starfish”, which slept 5 scientists for a month, featuring a living room and command center, as well as 4 bedrooms and laboratories. Nearby there were the “Urchin” (a garage, for the exploration submarine “Denise”), as well as a hangar to store tools and underwater scooters. Deeper down the reef, another plateau at 30 meters hosted the second human habitat, which housed 2 scientists for a week.

Most of the village has been removed that the end of the experiment, but fortunately a few relics can still be found: the “Urchin” and underwater scooters hangar on the 10 meters plateau, as well as some shark cages deeper on the reef. Being able to “dive” this pioneer exploration of the underwater worlds was definitely a highlight. The “Urchin” can be penetrated by divers and is in good shape, offering good photographic opportunities. Overall, the surrounding reef was very pleasant to dive too, and this part of Shaab Rumi was protected from currents.

After these emotions-filled, historical dives, we went on to visit several reefs, with a focus on enjoying Sudan’s abundant marine life and especially… finding hammerheads. Being further south than Egypt, it is worth noting that the Red Sea off Sudanese coast is also warmer. Mid-May the temperature in the first 20 meters was between 29 and 30 degrees Celsius, and still a balmy 27 degrees at 40-50 meters depth. Hammerheads like colder water, which meant we had to go deeper than 35-40 meters to see them.

Since everyone on the boat was keen to have as many encounters as possible with these mighty sharks, we followed a consistent dive plan on most days. We would jump on a RIB for the first dive of the day, have a negative entry nearby a reef wall (including another side of Shaab Rumi, Shab Jibna, Sanganeb), and drop down to 20ish meters, as quickly as possible. Once there, we would follow our guide along the wall, towards the tip of the reef, and then move away from it towards the deep blue, as the hammerhead sharks would not be visible from the reef.

Our guides would then make noises pressing empty plastic bottles, which seemed to get the schooling sharks a tad closer. At times we had maybe 20-30 sharks in sight, a mesmerizing experience! I noticed though the sharks stayed at a distance, and I didn’t experience close-up encounters during this trip (might have to do with the flu which saw me stay in bed for 2 days!). Given the depth and potential currents closer to the reef walls, our group would stay a few minutes with the sharks, and then follow the guide back towards the reef.

Then, we would all enjoy the lively and colorful reefs during the rest of the dive, then throw an SMB for the moving RIBs to pick-us up at the end of the dive. Lena and I usually separated from the open circuit divers on this second part of the dives, simply because we didn’t have to ascend to the shallows as quickly as our open circuit buddies. Also, since we never were short on gas, we were allowed an extra 15 minutes in the water (on top of the regular 60) by jumping in with the first RIB, returning with the second.

Most days the second dive followed exactly the same plan as the first one, for extra chances to encounter hammerhead sharks. Given these intense dive profiles, the plan was only two dives per day, with ample time to relax in between. Although we very much enjoyed ourselves, some divers may prefer to not go so deep or spend more time enjoying the colorful reefs in shallower depths, which I am sure the dive operator could accommodate.

Diving Attitude had kept 3 excellent dives for the very end of our trip, as we made our way back towards Port Sudan, and these were all in and around the Umbria wreck.

After changing hands a few times, the Umbria had become a cargo ship under Italian ownership, and its last journey was a secret mission to supply the Italian troops in Eritrea (then an Italian colony) with war equipment, as Italy was about to join World War II alongside Germany. The Umbria was heavily loaded, mostly with weapons (6700 tons of bombs, detonators and various firearms) but also with 2000 tons of construction equipment, and 3 Fiat trucks to transport the whole cargo.

It also loaded 1000 tons of coal and water, to try & dissimulate its military objective. During its journey through the Red Sea, the ship was under close scrutiny from the Briths Royal Navy, and on 10th June 1940, the Umbria’s captain saw no other option than to scuttle the ship, to ensure its precious cargo wouldn’t fall into Allies’ hands. Indeed, Italy had just joined World War II, with a radio announcement by Mussolini on that same day.

The Umbria is an amazing wreck to dive, with great photography potential: it is 153 meters long, with its deepest part at 38 meters (the bow), but most of the interesting artifacts were between 27 and 12 meters. This includes the impressive propeller, gangways, huge engine room, kitchen, canteen, corridors, and several of the holds, were various cargo can be seen, in 10-15 meters of water.

Given the sheer size of the wreck, it deserves 3-4 dives to visit everything. I recommend refraining from penetrating the kitchen and some of the corridors on your own, unless you are an experienced cave diver, trained in using a guideline to find your way out. Indeed, the wreck is silty, and lies tilted at about 45 degrees, making it easy to get disorientated. However, our experienced guides made it safe for all, taking turns with small groups of 4, to avoid crowding restricted areas.

Some of the holds though have wide opening and are easy to visit again on your own, including the one were the 3 Fiat trucks. What’s more: with the rebreathers and our boat being stationary for 3 dives, the guides let us stay 30-45mins extra per dive, meaning we spent a total of 5 hours on the Umbria, including 2 hours with the wreck all to ourselves. This allowed for more productive photography, as there were no other divers popping on the photo or stirring up sediment.

All-in-one, the size of the wreck, its historical significance, abundance of visible artifacts, and the various penetration options are all reasons why the Umbria is considered in the top-10 wreck dives worldwide. If you are into wrecks, it would probably justify a trip to Sudan on its own.

Even if wrecks and historical sites like Précontinent 2 aren’t your thing, the reefs off Sudan’s coast boast healthy hard & soft corals, paired with abundant fish-life, and there is potential for amazing pelagic encounters.

Who to dive with in Sudan?

Blue Force Fleet has more than 20 years of experience in diving safaris in the Red Sea, Sudan is an amazing destination and Blue force fleet operate in this region with the brand new and spectacular Red Sea Blue Force 3, making it easier to dive into the best and most inaccessible reefs of the Sudanese waters, with the guarantee of a reliable and experienced operator.

For more articles and images by Nicolas and Lena try: