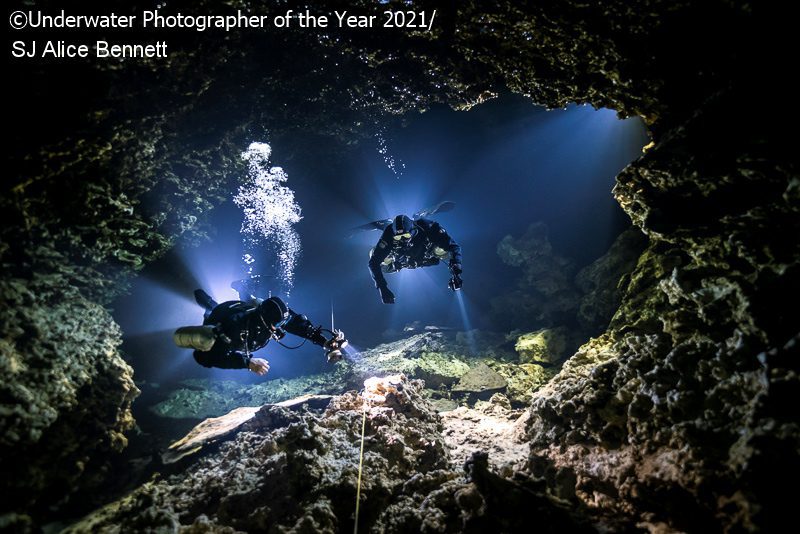 The best of both worlds The ‘dream luxury dive vacation’... 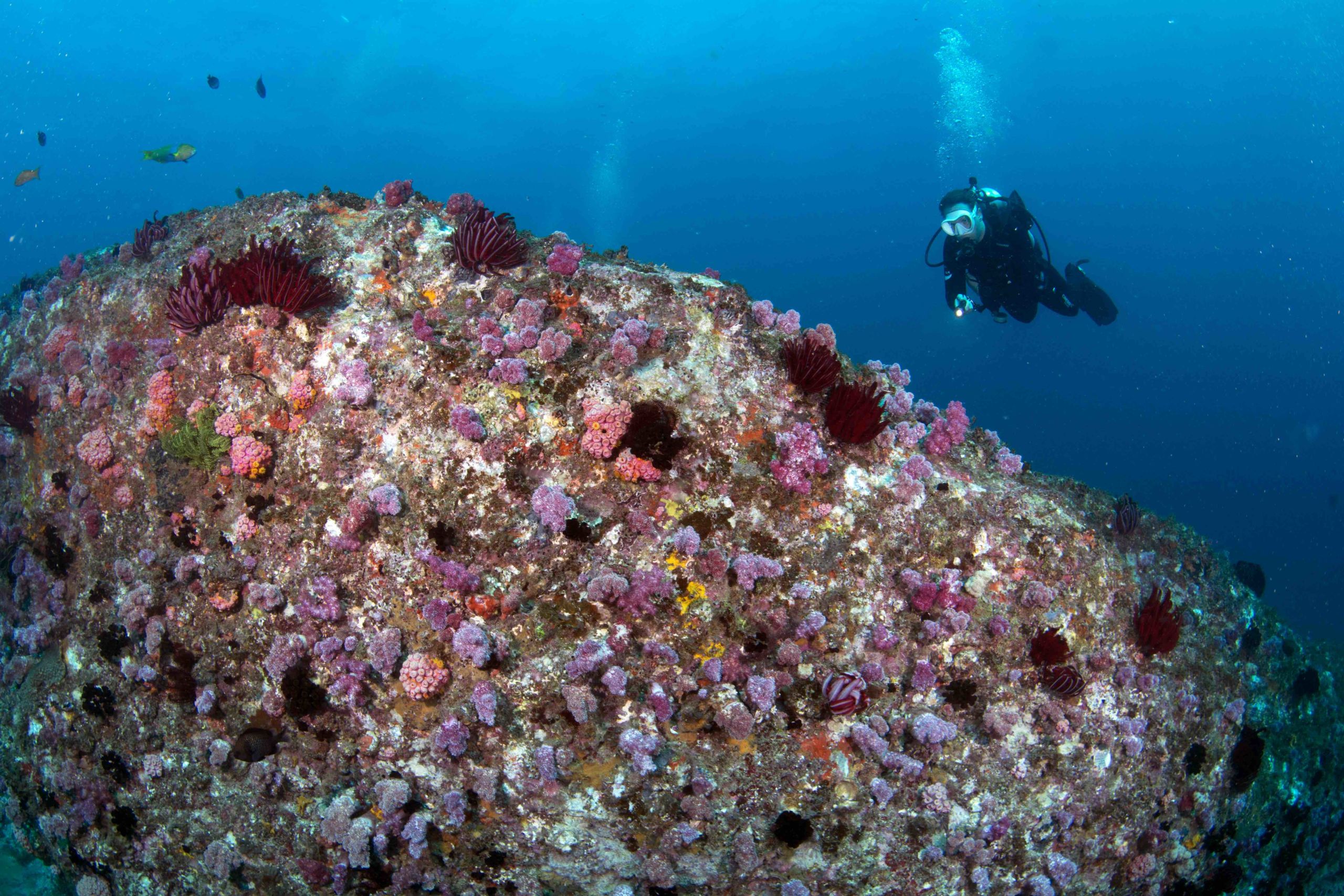 North Stradbroke Island or Straddie as it is more commonly known, is a mere 30km from Brisbane's city centre. This picturesque island has been blessed with some stunning dive sites, with the potential for some amazing animal encounters. In the summer months, Manta Rays are regular visitors to the cleaning station at the aptly named manta bommie, and large aggregations of leopard sharks can be found on many of the dive sites.

In the winter months, the mantas and leopards shark move away, and the Grey nurse sharks take their place. The winter season also sees the spectacular annual event of the humpback whale migration. 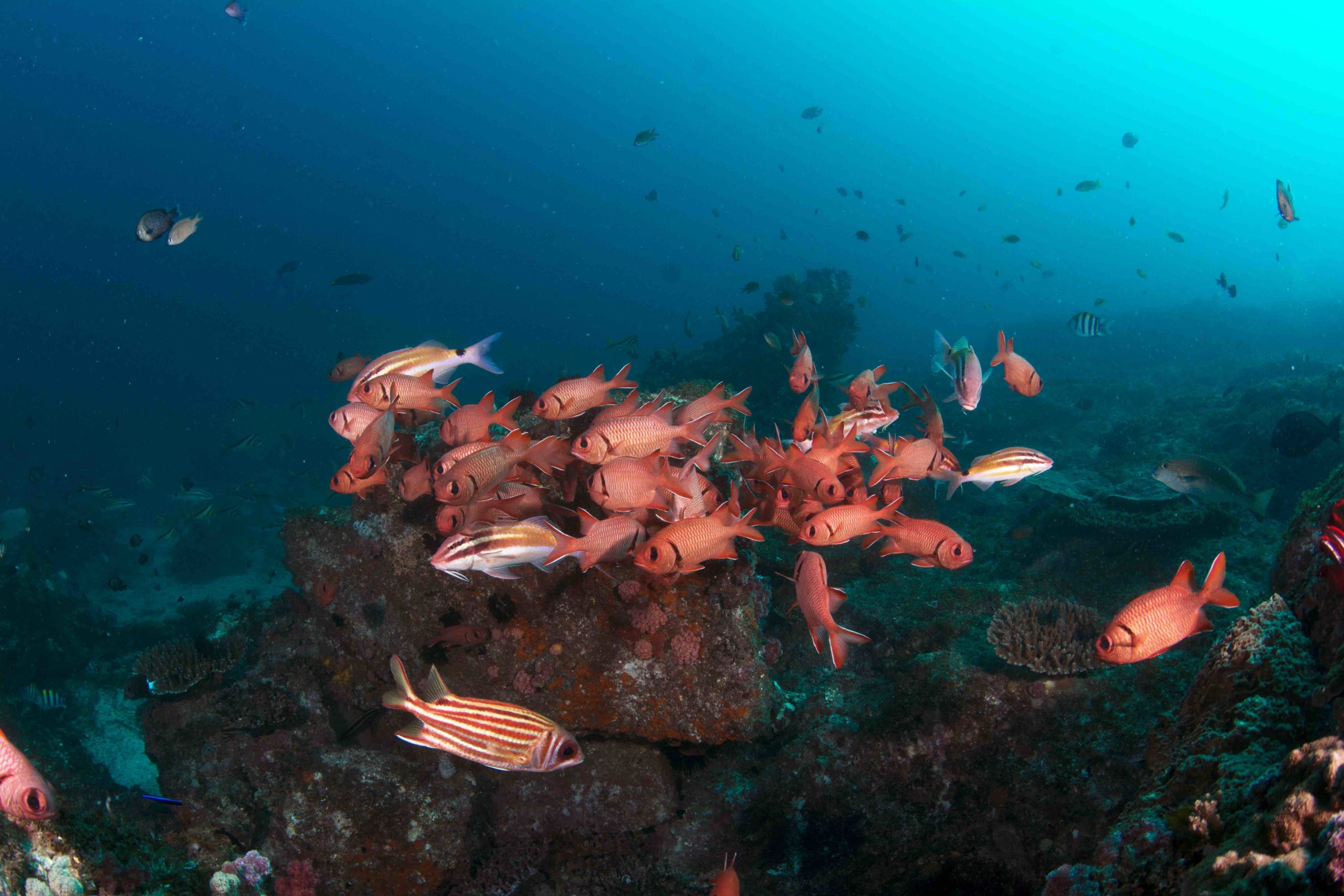 Our day started early as we needed to catch the 5.55 ferry from the Brisbane suburb of Cleveland. James, the owner of Manta Lodge, was on the ferry to greet us, and we used his shuttle service to take us to the dive centre. Once we had put our equipment together and stowed it safely on the rib, we made the short walk down to the beach where the boat was launched. After bouncing through the surf, we made the short but bumpy ride out to the dive site, Flat rock.

We were hoping to catch the tail end of the Manta season, but unfortunately, this was not to be. April is storm season in this part of the world, and diving is very weather dependant. The rough surface conditions and southerly winds meant that Manta bommie was not an option. A recent storm was also still wreaking havoc with the visibility on some of the dive sites. Runoff from the island and mainland had turned the water to a decidedly unwelcome shade of green. 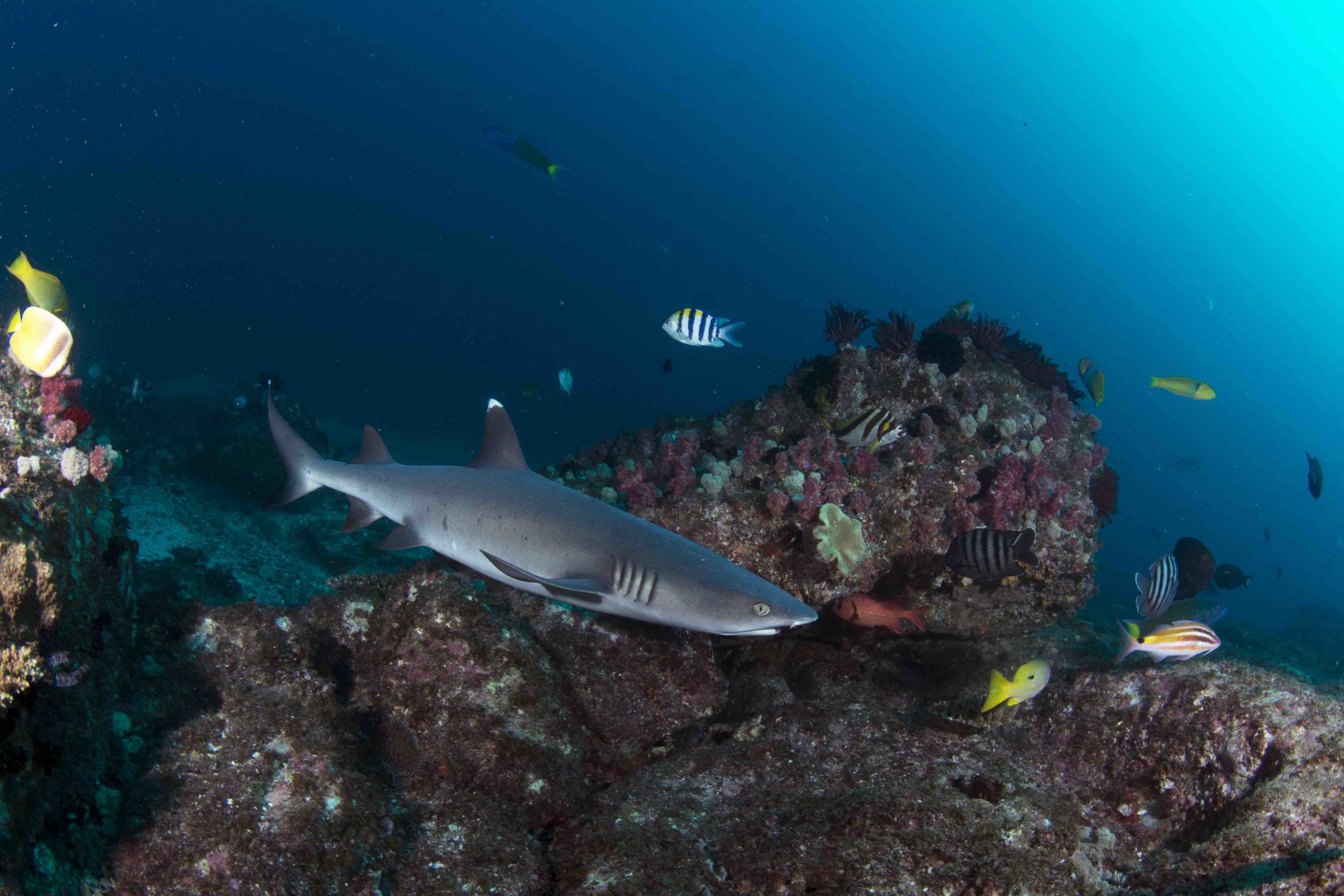 Fortunately, the sheltered side of Flat Rock was protected from the rough seas and was free of the poor visibility of the sites closer to shore. Both our dives were at a place called Turtle Cave, and we had about 15 meters visibility in nice blue water.

The dive site itself is comprised of long slabs of rock that step up from around 24m to the surface, angular ridges and small cave and overhangs interspersed with small bommies create an interesting topography. Small tufts of soft corals offer a splash of colour, and a variety of tropical and temperate fish congregated around the bommies. On the first dive, an energetic white tip reef shark buzzed around the site, eagerly sticking its nose into the numerous nooks and crannies looking for breakfast. 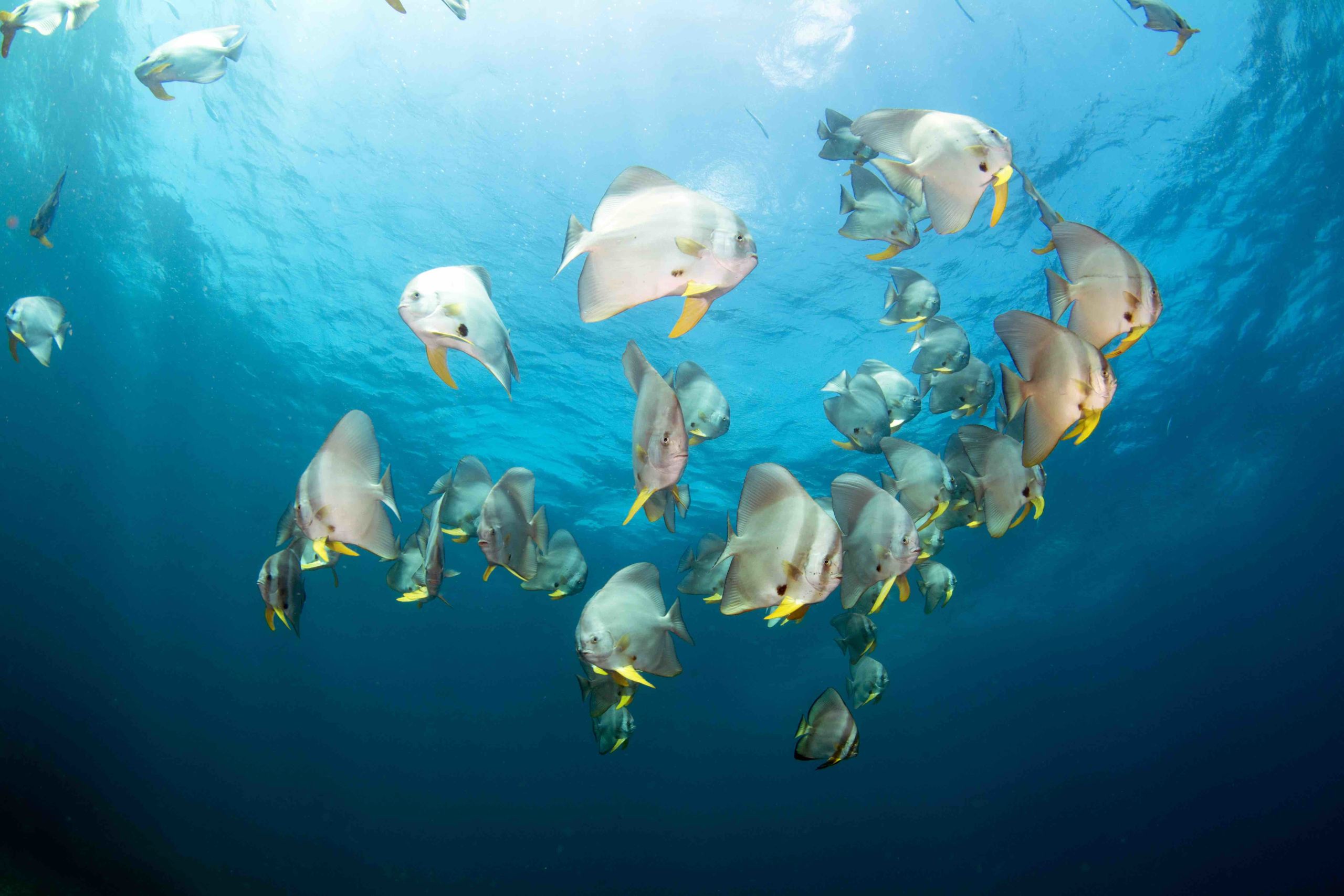 For the second dive, our goal was to find a huge school of Jacks that have been hanging out at this dive site and that the day before had attracted the attention of a hammerhead.  Unfortunately, our early efforts were in vain, so we set off to explore the rest of the dive site, encountering a large moray eel and plenty of scorpionfish along the way. Towards the end of the dive, we came across a school of batfish and lurking behind them the elusive jacks. The school was huge, and the remainder of the dive was spent with the impressive mass of fish.

It was a shame that we did not get to see the Mantas, but the dives we had were excellent. Straddie offers such a wealth of diving and the fact that it is so easy to get to means I will just have to come back and try my luck again. 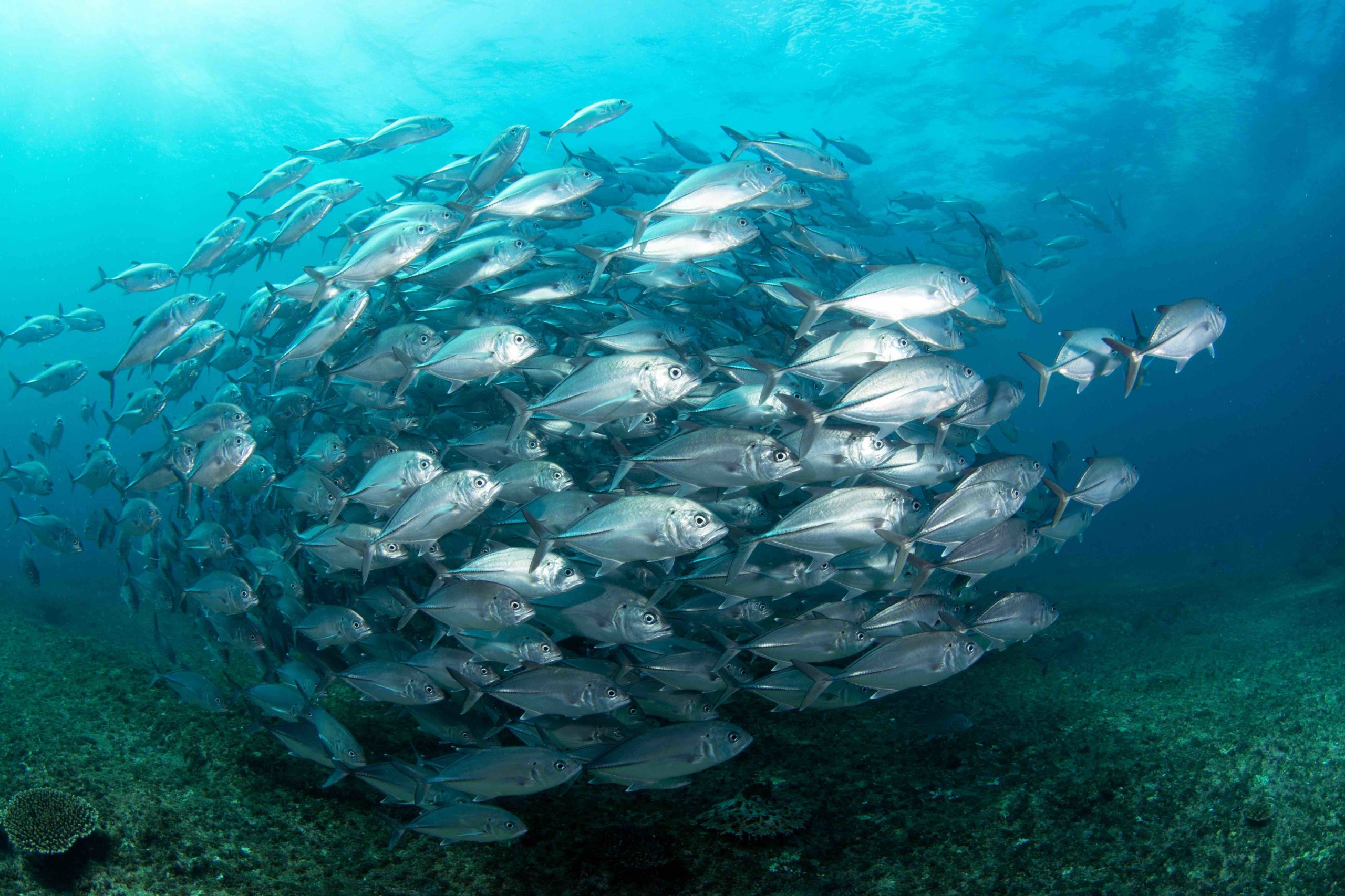 North Stradbroke Island is about a 30-minute ferry ride from the Brisbane suburb of Cleveland. Both passenger only and car ferries are available.

Manta Lodge is a family run dive centre located about a 15-minute drive from the ferry terminal. James, the owner, is friendly and passionate about diving, as are his staff, many of whom have been at the dive centre for years. This is a professional yet laid back dive centre which offers the full range of SSI dive course. Manta Lodge is also a YHA hostel, and they have recently refitted all of their rooms. Plus, the location could not be better as it is a stone's throw from the beach.

Look out for my feature article on North Stradbroke Island in the magazine later this year, Scuba Diver ANZ.