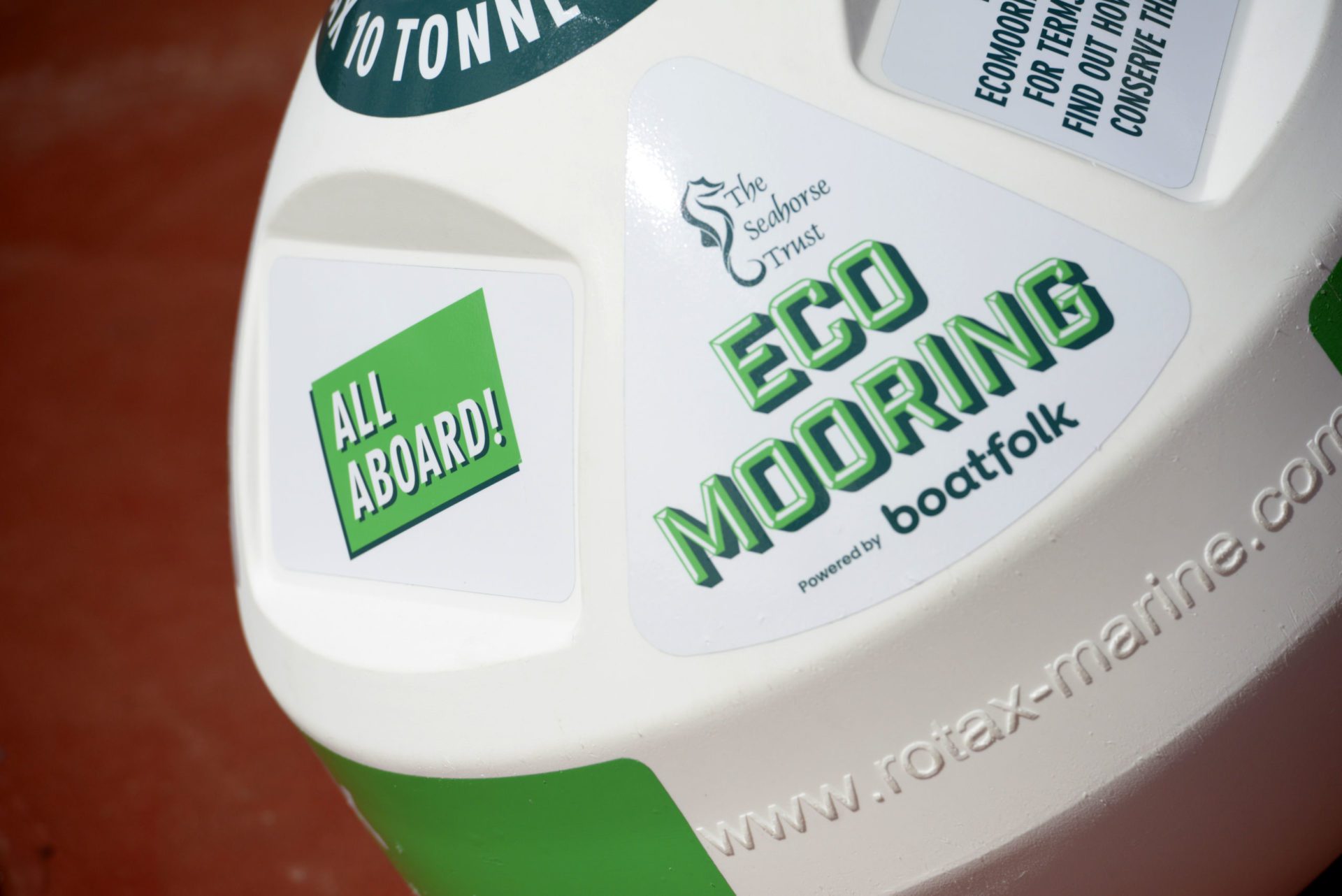 The two organisations have collaborated on a not-for-profit scheme to put ten ‘eco-moorings’ into Studland Bay to give boaters an attractive, environmentally friendly alternative to dropping their anchors. The dropping of anchors has damaging consequences for seabed environments, including seagrass meadows. This is a significant concern as seagrass provides essential habitat for species including seahorses and also stores up to twice as much carbon per hectare as terrestrial forests, playing a major role in keeping climate change in check.

The scheme was recently approved by the Marine Management Organisation (MMO) following its designation in 2019 as a Marine Conservation Zone (MCZ) and installation of the new eco-moorings is now underway. The organisations’ eco-mooring proposal was supported by letters from high-profile conservation advocates including Chris Packham and GO Diving Show keynote speaker Steve Backshall. The scheme is also being supported by Mitch Tonks and Rockfish who will provide funding for the installation of one of the eco-moorings.

The MCZ designation was made on the basis of Studland Bay’s seagrass meadows, which are an internationally important breeding ground for the spiny seahorse, one of Britain’s native seahorse species. The spiny seahorse was protected in 2008 under the Wildlife and Countryside Act following campaigning by the Seahorse Trust. The legal aim of the MCZ designation was to return both seagrass and seahorses to ‘favourable condition’.

Neil Garrick-Maidment, Founder and Executive Director of The Seahorse Trust said: “The designation of Studland Bay as a Marine Conservation Zone was a long-awaited and hugely significant moment in safeguarding UK seahorse populations. It is now vital that the area is effectively protected and that everyone who uses the bay does so responsibly and sustainably. I am delighted to be working with boatfolk to develop a practical solution, which allows boaters to continue enjoying this remarkable site, in a way which also enables the conservation of rare seagrass meadows and crucial seahorse breeding grounds.”

Michael Prideaux, Managing Director of boatfolk said: “In late-August, I met Neil on the beach at Studland Bay. We were united by our shared passion for the environment and by a desire to work with, and alongside, the boating community for a solution that everyone can get behind. boatfolk is all about making it easy for people to get out on the water and to enjoy their time afloat. Providing an alternative option at Studland that protects this incredible marine environment is about doing the right thing for boaters and for our planet. Financial return is not an objective here; we are committed to making Studland Bay a sustainable boating destination for generations to come and are proud to be putting our name and resources behind the scheme.”

The scheme forms part of boatfolk’s wider sustainability strategy, Coastline Deadline, a new platform designed to back projects which have a real, positive and measurable impact on the coastline.

Michael Prideaux adds, “We know our industry has an impact on the environment and that not enough is being done to raise awareness and change behaviours. Our goal isn’t to stop people boating. In fact, it’s the opposite. By making changes now we want to ensure that the coastline and oceans remain a place that can be enjoyed for generations to come.”

The benefits of eco-moorings are well-documented. Such moorings involve a helical screw anchor being driven into the seabed. An elastic rode is then attached, connecting the anchor system with the mooring buoy. The elastic rode will stretch at higher tides and contract at lower tides meaning that none of the equipment scours the seagrass around it. The moorings also provide a hassle-free option for boaters, saving them the trouble of having to drop their own anchors (which can often drag before taking a hold and leave the boat owner to clean the equipment afterwards).

Neil Garrick-Maidment and Michael Prideaux commented: “The Seahorse Trust and boatfolk are united in a clear belief that eco-moorings are the way forward for Studland, allowing boaters to continue enjoying the site while seagrass and seahorses thrive alongside. We were thrilled  to secure MMO approval for our proposal, which we believe provides a practical and collaborative roadmap to finally giving Studland Bay the effective protection it deserves, and are delighted that installation of the eco-moorings is now underway following successful tests of the helical screw.”

The Seahorse Trust and boatfolk are very grateful to award-winning Devon and Dorset restaurant group Rockfish for their generous sponsorship of one of the initial ten eco-moorings.

Mitch Tonks, restaurateur, Rockfish and Seahorse restaurants, and co-founder of the Devon Environment Foundation, expressed his support for the scheme: “We believe Rockfish has a purpose beyond our restaurants. This is exactly the sort of project we like to support – practical, visible and useful, as well as changing the way we impact our world. It’s this on-the-ground stuff we love that people like The Seahorse Trust go out there and do.”