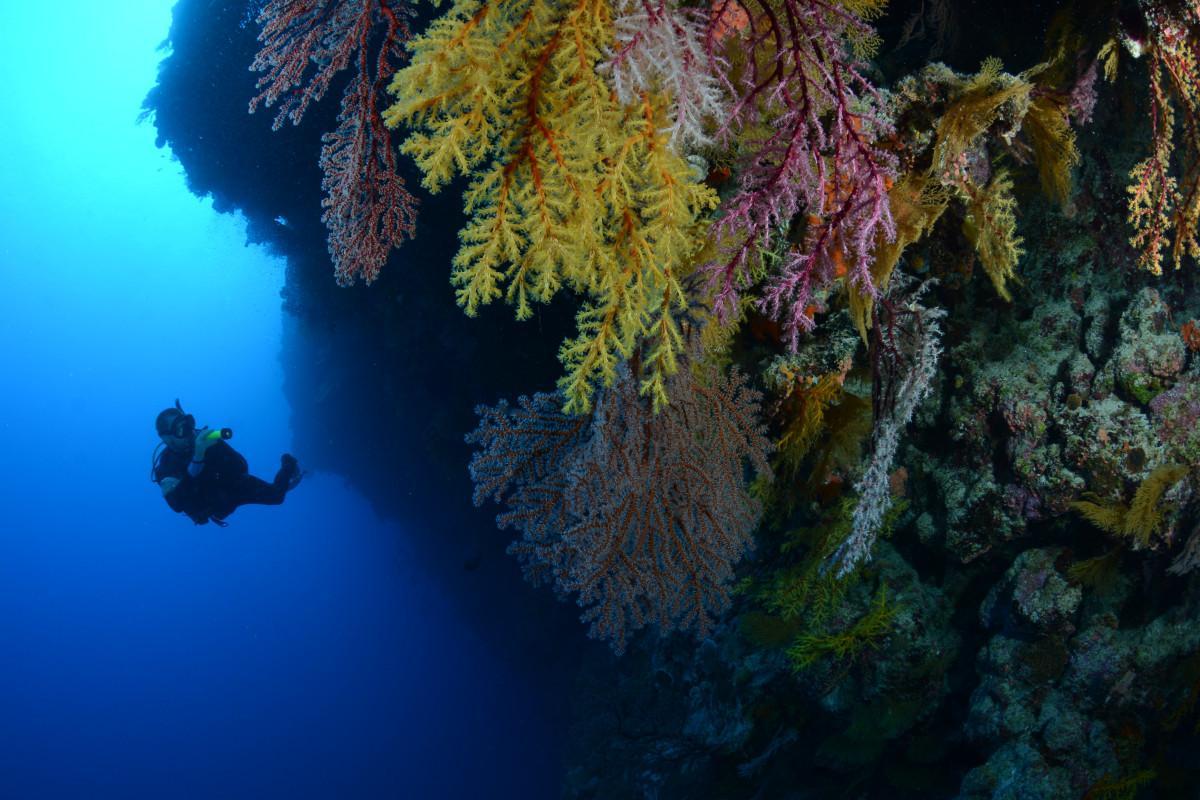 The first three dives of the day would all be conducted from North Horn Wall located at the Northern point of the reef, this dive area is perhaps the highlight of the trip. At the point where Marlin Wall and Soft Coral wall converge their is a small plate at a depth of around 20-25 meters. As you look down on the area after first entering the water you just know that this is a place where anything could happen, given the right conditions.

On the first dive we went reef right, down Marlin Wall. This shear wall is covered in orange soft corals and offers numerous places for anemones to anchor. But the real action of this dive took place close to the plateau, grey and white tip reef sharks provided the warm up for the main event, a hammerhead shark. A large school of barracuda swirled in a tight formation a little way off the reef in the blue and they were joined by some nervous looking surgeonfish, as a huge tuna and several wahoo flew by.

The second dive was the shark attraction dive. This takes place on the plateau in a natural amphitheater that uses as large bommie as a dinner table for the sharks. Grey Reef and white tip reef sharks are the main protagonist. But a whole host of other fish also get in on the action. After the frenzied excitement of the feed we headed down to the tip of the plateau where a strong current had attracted the sharks that we had just enjoyed watching.

Our final dive at North Horn Wall was a gentle drift down Soft Coral Wall towards the plateau of North Horn. As the name suggests this wall is covered in a patchwork of different coloured broccoli corals, sea fans and whip corals. They clung to the sheer reef walls, they swayed gentle on rocky outcrops and they were stuck tightly under the protruding overhangs. Schools of Fusiliers were harried by Schools or big eye trevally, they are intern were hunted by the huge tuna and the grey reef sharks that patrol the waters just off the reef. At the end of the drift we finished the dive at North Horn where we were met by more sharks a turtle and more schooling fish. So far my favourite dive site.

The Last dive of the day was at Castles, so named because of the immense coral structures that climb 20 or so meters from a sandy plate to just below the surface. encrusted in hard corals and attracting a host of reef fish these huge monoliths also offered caves of yellow sea fans, swim thoughts and plenty of the ever present white tip Reef sharks, this is yet another of Osprey reefs, not to be missed, dives.

For our final day we returned to the ribbon Reefs and back to Steve's Bommie for a double morning dive. As usual this dive did not disappoint. Steve's Bommie is one of those sites that you could happily dive again and again, The glass fish coral bommie at 25 meters was still spectacular the giant frogfish was still posing in a sponge and the large school of yellow snapper were still hanging around the bommie, accompanied by swarms of athias. In addition to the usual protagonists there was also a school of bigeye travelling circling just off the reef, shadowed by a large Grey Reef shark and watched over by a huge Barracuda. There was also the discovery of there leaf scorpion fish and several stone fish. Steve’ Bommie is the dive site that just keeps giving and was a great to end the weeks diving.

There we also two afternoon dives but with a midmorning flight to catch the next day and a considerable amount of nitrogen loading I sat out the final two dives. Instead opting for a well earned nap before beginning the arduous task of selecting my favourite photos from the thousand or so that I had taken.

This is a great itinerary that offers plenty of variation and somer truly stunning dives. The Spirit of Freedom crew were amazing and could not do enough for you, the food was out of this world and their passion for the Great Barrier Reef was so genuine you could not help but be swept up in their enthusiasm.