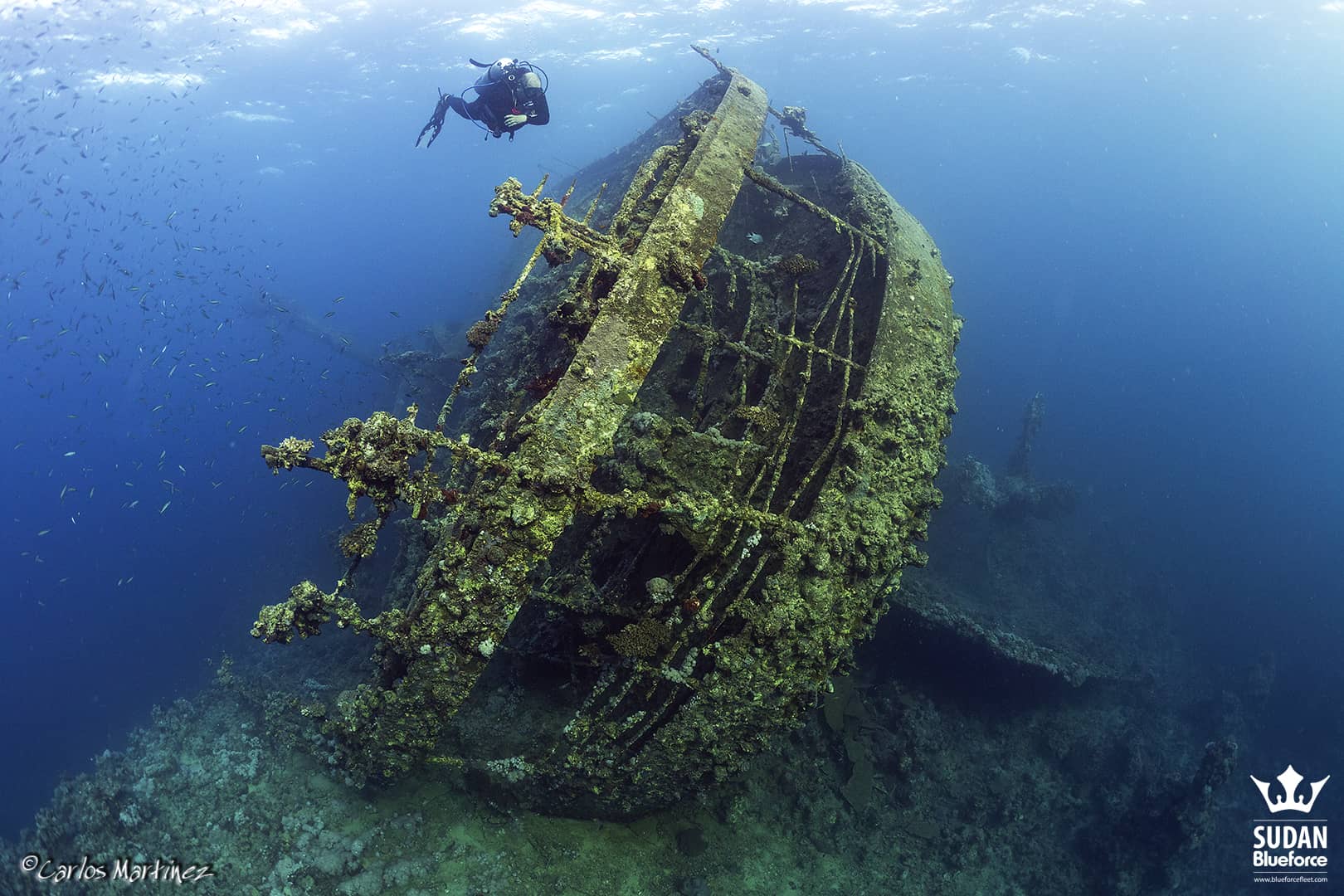 To denote dangerous or unexplored territories on navigational charts...
Contents hide
1 The Wreck of the Umbria in Sudan is considered to be one of the best wrecks in the world
1.1 Story of Umbria Shipwreck in Sudan
2 Diving the Umbria Shipwreck
2.1 How and when to dive in the Umbria

On board the Blue Force Fleet vessel that operates in Sudan, you can also discover and enjoy from just 5 meters deep the spectacular 155-meter-long shipwreck loaded with hundreds of tons of intact weapons and much more. Come and find out the exciting story of this mythical shipwreck.

Story of Umbria Shipwreck in Sudan

Nine years after its on purpose sinking (June 10, 1940) it was explored for the first time by Hans Hass, one of the most famous diving pioneers. The remains of the Umbria are undoubtedly one of the best wrecks in the world and every diver traveler must include her in the TOP 10 list of shipwrecks to dive. It is the perfect wreck to dive since it sank peacefully in shallow water, without explosions or damage caused by bombs or torpedoes, so it houses intact the immense load of weapons it was carrying, as well as a large amount of marine life that has colonized it.

Built in Hamburg, it was launched as “Bahía Blanca” on December 30, 1911; she was a cargo ship, capable of carrying more than 2,000 passengers and 9,000 tons of cargo. In 1912 she entered service with the Hamburg-America line and they plowed the route between Europe and Argentina until the outbreak of World War I.

In 1918 the ship was acquired by the Argentinian Government and later, in 1935, transferred to the Italian Government, who changed her name to “Umbria” and turned her into a troop transport ship. For two years she transported thousands of soldiers to various colonies in East Africa, before finally being sold to the Triestino Line in 1937 to cover the route between Italy and various ports in the Mediterranean and the Red Sea.

On the night of May 28, 1940, Captain Lorenzo Muiesan left Naples after personally supervising the cargo she was carrying for the Italian troops stationed in the East African colonies. The Umbria had in its cellars several Fiat armored vehicles, bottles of wine, provisions, thousands of bombs, a large quantity of weapons and 20 boxes of “Thalers de Maria Teresa” (a currency adopted by Italy to pay the payrolls of soldiers posted in its Eritrean colony).

On June 3, 1940, she arrived in Port Said, loading water and coal, trying to look like a simple cargo ship. Although Italy was expected to ally with Germany at any time, it remained technically neutral so the British-controlled port officials were unable to delay the ship and the cargo she was carrying from reaching its destination, on June 6 she was finally allowed to go on with her journey.

On their way to Eritrea, on June 9, two English warships, the corvette HMS Grimsby and the battleship HMS Leander, intercepted the Umbria, forcing her to anchor near the coast of Port Sudan, with the clear intention of seizing the ship and all cargo. On the morning of June 10, Captain Muiesan was listening to the radio and became the only man on board to know that Italy had formally declared war.

Therefore, his ship would pass into enemy hands as soon as the news reached the English. His decision was swift, and secretly he ordered the chief engineer to sink the ship. He then gathered the crew on deck and ordered the ship to be evacuated simulating a routine salvage drill. When the English realized the deception, it was too late and they had no choice but to abandon the ship to her destination. In this way, the Umbria sank forever the 10th of June of 1940, before her cargo was confiscated thanks to the ruse of her captain.

The shipwreck is lying on its port side between -5 and -33 meters deep. You can dive her 155 meters long hull and her immense cellars, engine room, kitchen, corridors, dining room … The exterior of the wreck is easy to dive due to the depth at which is found and the absence of currents.

However, the internal exploration of the Umbria wreck represents a real adventure for the divers who enter her, since no salvage and recovery work was ever carried out on the wreck after its sinking and both its interior and its cargo are practically intact. The deepest part of the wreck has a thick layer of silt and sediment and visibility can be poor. Its hull is upholstered with soft and hard corals, sponges and anemones. An exceptional marine life develops around the wreck, including crabs, lobsters, crinoids, clown fish, Spanish dancers, snappers, sweet lips, butterflies, humpback parrotfish and barracudas.

For photography lovers, pay special attention to backlights through the portholes in the dining room and interior corridors and the starboard propeller that at just 18 meters deep offers spectacular views. Inside we will discover the engine room, the FIAT Lungo 1100 vehicles, warehouses full of cement bags, glass bottles, ammunition for rifles, aircraft parts, incredible walls with more than 300,000 stacked bombs, the kitchens still intact, the impressive hallways and dining room.

How and when to dive in the Umbria

On board the Red Sea Blue Force 3, you can enjoy diving in a spectacular submerged archaeological museum. Due to weather conditions, the best diving season in Sudan is from February till May. All the liveaboard safari routes that Blue Force Fleet offers in Sudan include diving the Umbria. Check the schedule of safaris and routes in SCHEDULE BLUE FORCE SUDAN, all the additional information you need about this destination you will find it on the BLUE FORCE FLEET – RED SEA – SUDAN website, as well as downloading the Brochure SUDAN – SHARK DIVE EXPEDITION Don’t dream about it, live it and book your liveaboard trip in Sudan with Blue Force now!