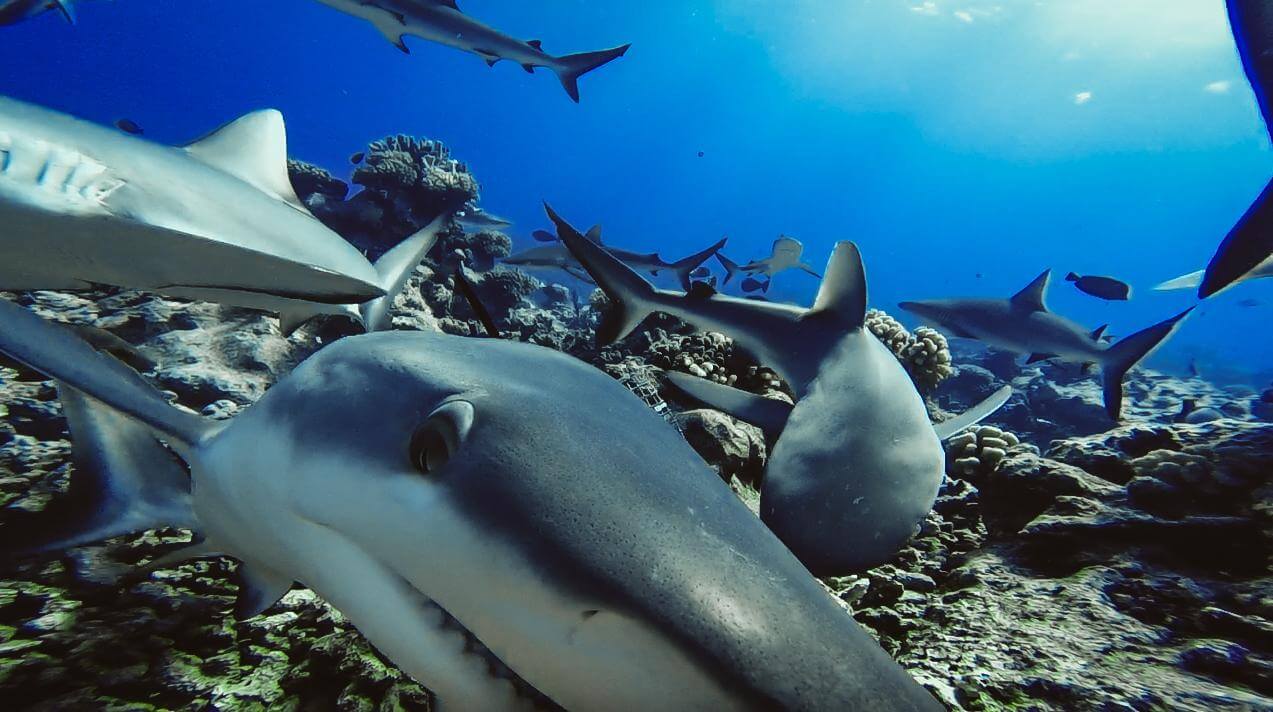 A ground-breaking global survey of reef shark populations has found an alarming absence of sharks in nearly 20% of the coral reefs surveyed, with about 100 million sharks killed annually for their fins and meat, and one in four shark species threatened with extinction. The five-year study, conducted by the Paul G. Allen Family Foundation and led by Florida International University, is the largest and most comprehensive of its kind, covering 371 reefs in 58 countries and territories.

More than 15,000 baited remote underwater video systems (BRUVS) were used to record the movements of sharks, rays and other marine life in coral reefs in four key regions – the Western Atlantic, Indian Ocean, Western Pacific, and Central Pacific. No sharks were detected on reefs in six nations (the Dominican Republic, the French West Indies, Kenya, Vietnam, the Windward Dutch Antilles, and Qatar), and 35 out of 58 nations surveyed (60%) had half as many sharks as expected. 63% of the BRUVS in the survey failing to record the presence of sharks, indicating widespread depletion of reef sharks across much of the world’s tropical oceans.

WWF, though not directly involved in the study, sees this as a major wake-up call for governments and conservation organisations worldwide. “Coral reefs are probably the most widely protected type of habitat for sharks globally, but even once common species are disappearing in many of the places surveyed,” says Andy Cornish, Leader of Sharks: Restoring the Balance, WWF and TRAFFIC’s joint shark and ray conservation programme. “This is not a localised problem, but a widespread one.”

Overfishing and destructive fishing practices, such as the use of nonselective multispecies gear, including longlines and gillnets can be blamed for the shark declines. The study found a correlation between shark depletion and socio-economic conditions such as the size and proximity of the nearest markets, high human population density and poor governance. Meanwhile, countries and territories that are generally well-governed and/or in remote locations, and with strong management of shark fisheries or shark sanctuaries, tended to have the highest abundance of reef sharks, including Australia, the Bahamas, the Federated States of Micronesia, French Polynesia, the Maldives, and the United States.

Simon Miller, WWF-Australia’s Sustainable Fisheries Project Manager, says that even where shark numbers were found to be healthy, more can, and still needs to be done. “While Australia performs relatively well in this study, gill net, longline and trawl fisheries continue to put a number of endangered sharks and rays at risk,” he says. The organisation is actively engaging with communities to find a solution, and Miller urges all sectors to get involved: “WWF-Australia is working with Traditional Owners, fishers and the tourism industry to urge the Queensland Government to ban gill nets from the pristine waters of Cape York, and establish a Net-Free North to provide a sanctuary for critically endangered scalloped hammerhead sharks and sawfish.”

The study highlights a range of measures that can be adopted by governments and regulatory bodies to help maintain and revive shark populations. Key actions it recommends are: restricting non-selective fishing gear such as gillnets or longlines that catch a wide range of species, including sharks but also marine mammals and seabirds; setting catch limits to control the number of sharks caught; creating large marine protected areas or expanding existing ones; and creating shark sanctuaries where all shark fishing, trade, and retention of shark bycatch is prohibited.

WWF’s Andy Cornish is calling for swift uptake of the recommendations to stem the decline: “We must come together and act now to reverse this trend before it’s too late. Governments – and especially authorities in those countries that did not perform well in the study – should urgently implement all the necessary measures to recover shark populations in their waters, and not just on coral reefs. Losing sharks means destroying the delicate ecological balance under water and putting the livelihoods, health, and well-being of people who depend on sharks and coral reefs at risk.”