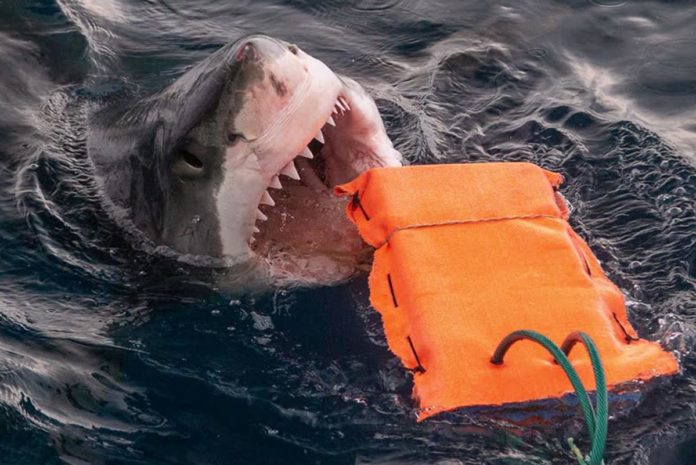 A new wetsuit material tested by Flinders marine researchers can help reduce blood loss caused by shark bites, to reduce injuries and prevent the leading cause of death.

Associate Professor Charlie Huveneers, from the Southern Shark Ecology Group, says new technological advances in fabric have allowed the development of lightweight alternatives that can be incorporated onto traditional wetsuits.

“The aim of this study was to assess the ability of new fabrics incorporated into neoprene to reduce injuries from white shark bites,” says Associate Professor Huveneers.

“Our results showed that both fabrics tested may provide some protection against shark bite and could be used as part of a shark bite mitigation strategy.”

“We tested the fabric on white sharks because it is the species responsible for the most fatalities from shark bites.”

“We found that the new fabrics were more resistant to puncture, laceration, and bites from white Sharks than standard neoprene.”

“More force was required to puncture the new fabrics compared to control fabrics (laboratory-based tests), and cuts made to the new fabrics were smaller and shallower than those on standard neoprene from both types of test, i.e. laboratory and field tests.”

Prof Huveneers says the results are positive but more testing is required in an incorporated wetsuit design and on the potential damage to human flesh underneath for more robust recommendations.

“Although these fabrics may reduce blood loss resulting from a shark bite, further research is needed to measure the magnitude of injury to human flesh.”

The Team from Flinders University were assisted with their research by Rodney Fox Shark Expeditions. They had this to say.

‘This is the reason for our tours’ says a smiling Andrew Fox, Director of Rodney Fox Shark Expeditions. ‘We strive to better understand great white sharks and to share this knowledge onboard with our guests. We appreciate that some ocean users can encounter white sharks unexpectedly and we want to be involved in any product that can make people safer in the water’.

‘We tested the material on a range of different sized great white sharks and found it to be extremely resistant to the bites of even larger and more powerful individuals.’

‘The material we are testing will hopefully be used by surfers, divers and other ocean loving people to give peace of mind that, in the highly unlikely event of being bitten by a shark, they are maximising their chance of survival by wearing a suit that will greatly assist in minimising blood loss.

‘Of course, the best place to come and learn more about great white sharks and the other cutting edge research we are involved with, is on our expedition vessel Rodney Fox’

We go to the best place in the world to see white sharks, the Neptune Islands (Ron and Valerie Taylor) Marine Park’ says Andrew ‘and in the upcoming autumn and winter months we have a good chance of seeing some of the supersized females like 5.5m ’Matilda’ pictured here. Though this shot looks scary, Matilda has not even dropped down her top teeth and is in a curious, but very relaxed pose, such serenity is typical with these surprisingly cautious giants.