Scuba Escape – are you up to the challenge? 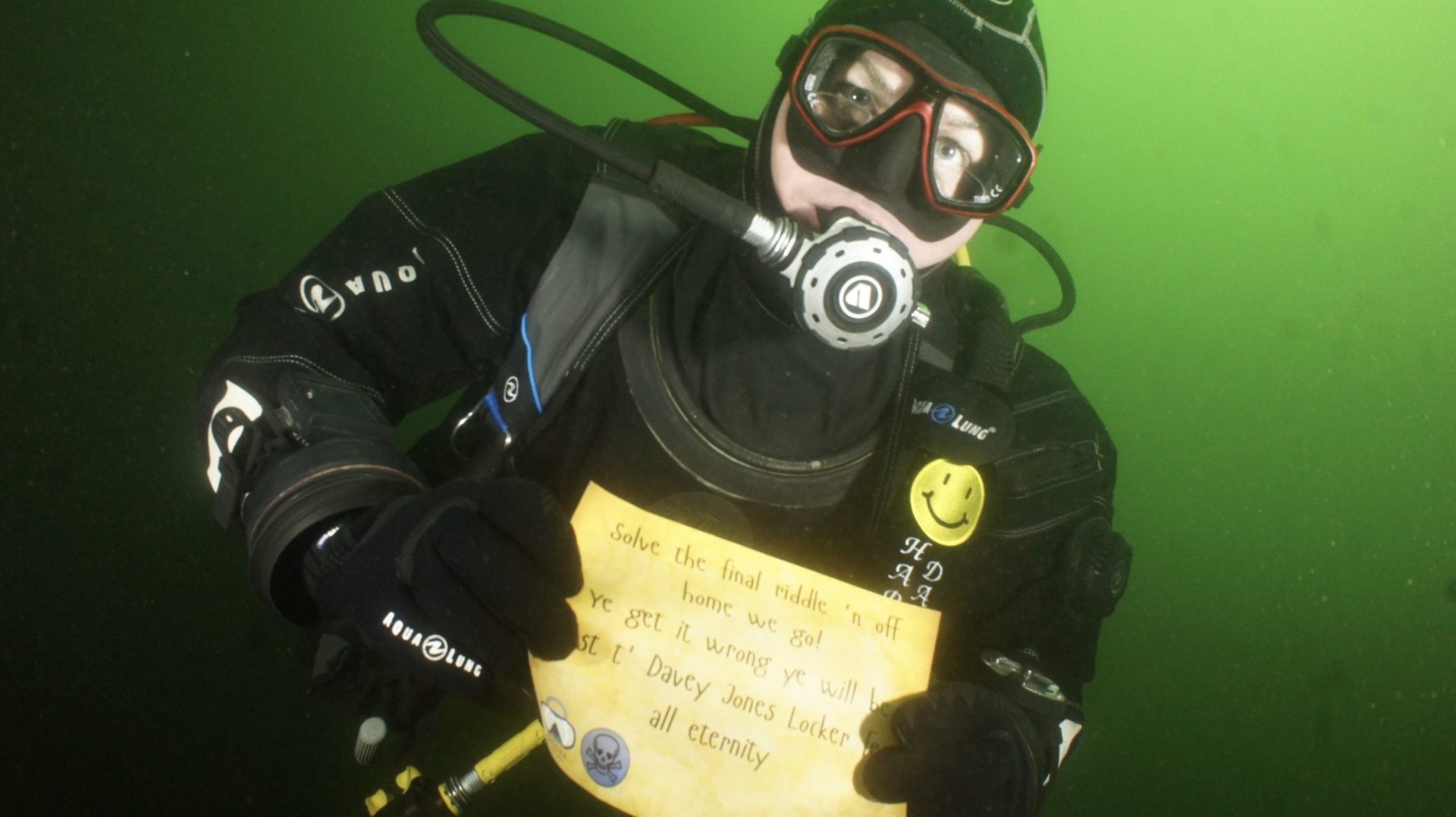 The Sunset Fruit Bats Migration of Raja Ampat Nothing about...
Contents hide
1 Divers of all levels who want to test their mettle underwater can now head to North Wales for Scuba Escape – the world’s first scuba escape room! Mark Evans went along to see what all the fuss was about…
1.1 Will we escape from Vivian?
1.2 Make a weekend of it!

Divers of all levels who want to test their mettle underwater can now head to North Wales for Scuba Escape – the world’s first scuba escape room! Mark Evans went along to see what all the fuss was about…

Escape Rooms are all the rage right now. All over the world, people are willingly being locked into rooms or buildings and then set missions, quizzes and puzzles to find all the necessary answers and make good their escape – or not, as the case may be.

The last 12 months or so might have seemed like one big Escape Room, what with COVID-19 and repeated lockdowns, but now, as we head towards the summer and increasingly relaxed restrictions, there are another set of escape challenges on offer – only this time with a watery twist.

In the midst of North Wales’ picturesque Snowdonia National Park, you find the quaint village of Llanberis, and it is here – surrounded by mountains – that you find Vivian Quarry, the home of the world’s first Scuba Escape.

Vivian Quarry will be familiar to regular readers, as it is the main testing site for Scuba Diver’s hardy Test Team, but for anyone who has never been here, it is a truly stunningly beautiful location. You venture through a short tunnel, seemingly in a sheer rock face, and when you emerge from the other side, you can feel like you have entered Middle Earth. Towering slate cliffs reach up into the sky all around you, and the inviting body of water is surrounded by trees and the remnants of quarrying days of old. It is a fitting setting for a whole host of escape challenges. It definitely has that Hollywood appeal – Guy Ritchie shot some scenes here for his recent reimagining of King Arthur.

Scuba Escape is the brainchild of Clare Dutton, co-founder of Duttons Divers – which is actually based at Vivian Quarry – and Leanne Clowes, who is in the process of opening a new dive centre in Warrington called Palaemon Divers.

The innovative duo saw a gap in the market and, with Vivian Quarry offering the perfect Escape Room – two big red doors can lock off the entrance to the site, making it one big ‘room’ effectively – they set about dreaming up different challenges that would incorporate all of the things that people love about landlocked Escape Room games, but with an added scuba element. Importantly, they wanted the different missions to be all-inclusive, and with Vivian having a maximum depth of 18m, anyone who is an Open Water Diver or above (or equivalent) is able to take part.

Maximum number of divers is normally six, but for dive club and centre bookings, they can facilitate up to 12 people. The participants are given a thorough briefing by the game hosts, and then they head through the red gates. Once these are locked shut, the game begins, and the teams have to work together to find the clues, solve the game and make good their escape.

The Scuba Escape team have come up with six different games, all with very different themes:

Operation Z – ‘There has been an incident at the local viral testing facility, there are two surviving scientists that we must rescue, a cure to search for… oh, and a horde of living dead to contend with. Do you have what it takes to survive and save the world from the outbreak?’

Countdown – ‘There has been a landslide at the nuclear testing facility, we have a nuclear bomb at this site and it’s been activated in the shake. You have 1.5 hours to find the code and put it in the correct sequence to stop the bomb from going off. The countdown has begun…’

The Treasure of the Syreni – ‘A pirate treasure offering a life of eternity can you use your navigation skills to find the items to open the chest? It won’t be an easy quest, legend has it that the treasure is guarded by the mermaids of Syreni and won’t let it go without a fight.’

Money Heist – ‘Pablo has stolen £1m from the Bank of Llanberis! He’s stashed it in Vivian Quarry. Pablo was the king of covering his tracks, but the police divers are on the way and we must get the stash before the police, or we will be behind bars in no time. We have a map and a clue, the rest is up to you!’

Murder Mystery – ‘We have the five suspects in for questioning, we need to figure out who did it before they get released. We have clues, case files, interviews and a woman with a serious second life! Can you figure it all out in time?’

Save Vivoria! – ‘The evil King Snowdon has captured our Princess and locked her in the tower, we must rescue her so we can take back our land.’

They have sought to bring in many different dive skills, from search and recovery, use of lift bags, diver propulsion vehicles, navigation and much more, so as well as having fun, divers will also be brushing up on existing, or trying out new, dive skills. Clare – a PADI Course Director – is even getting it signed off that completion of the different Scuba Escape missions can count towards the PADI Master Scuba Diver certification, and certain dive elements can be put towards the full PADI Specialty in that particular area.

Will we escape from Vivian?

I headed up to North Wales at the end of April to take part in Clare and Leanne’s first-ever Scuba Escape session. They were wanting to see how a game ran, and get feedback from actual participants, so I was joined by Gemma Thompson from Dive Proof, who are well as making nifty logbooks and associated goodies, is also responsible for the printed elements of Scuba Escape; Katie Broadley from Bolton Area Divers; and Dave Keany from Canary Divers.

Also along for the ride was Tamara Hinson, a freelance journalist there on behalf of the Metro newspaper, who was a recent PADI Open Water Diver and would be making her first foray into UK waters!

We were going to be doing The Treasures of the Syreni game, and without giving too much away, it basically entailed crusty pirates (well done Brad, for stepping in at the last minute to ‘play pirate’) and ravishing mermaids, treasure hunts for precious gems, golden coins, priceless rings and necklaces, and search and recovery missions amid rum bottles, skeletons and more.

Clare, Leanne and Jean had really gone to town on the props, and right from heading through the red gates at Vivian you were ‘in the zone’. Now, as with anything of this ilk, be that a ‘normal’ Escape Room experience, a zombie apocalypse event or whatever, you have to fully immerse yourself into the whole thing. If you come into these with a ‘it’s not going to be real/fun’ attitude, then you won’t enjoy it, but tap into your inner adventurer and open your mind to a bit of fun with a side-serving of diving and you will have a blast.

Our group boasted everyone from a novice PADI Open Water Diver right up to people with thousands of dives and high-level instructors, and all agreed it was an enjoyable experience. This particular game tested your navigational skills, and as in the deeper parts of the quarry it was a murky green, you had to rely on your compass skills as you couldn’t really use natural navigation. Then throw in a bit of search and recovery as we rooted around to find clues and the necessary items required to open the treasure chest, all while maintaining good buoyancy to avoid kicking up the thick silt on the bottom of the site. We only did the one dive with a few items to find as a trial, the full game involves two dives and more clues/items, but as it was, let’s just say that some of us escaped… and others didn’t…

Clare and Leanne were unsure of how the Scuba Escape would be received, but they have been inundated with requests for more information, and have already got a plethora of bookings. “We thought it would be most popular with buddy teams wanting to do something different,” said Clare, “but we have actually had lots of interest from dive centres and clubs wanting to bring groups along.”

The games can be tailored to the participants, and some of them lend themselves to a more-competitive element, so if buddy pairs within groups want to take on one another, that can be arranged. There is even talk of a tournament and a leader board!

As you do each game, you get a sticker to go into your Scuba Escape logbook, and the first people to complete all six will win a prize!

Make a weekend of it!

Maximise your dive time and see what else North Wales has to offer. Scuba Escape has teamed up with Duttons Divers, which has dive centres at Vivian itself and now in Pwllheli, and they can put together bespoke packages combining Scuba Escape, shore and/or boat dives.