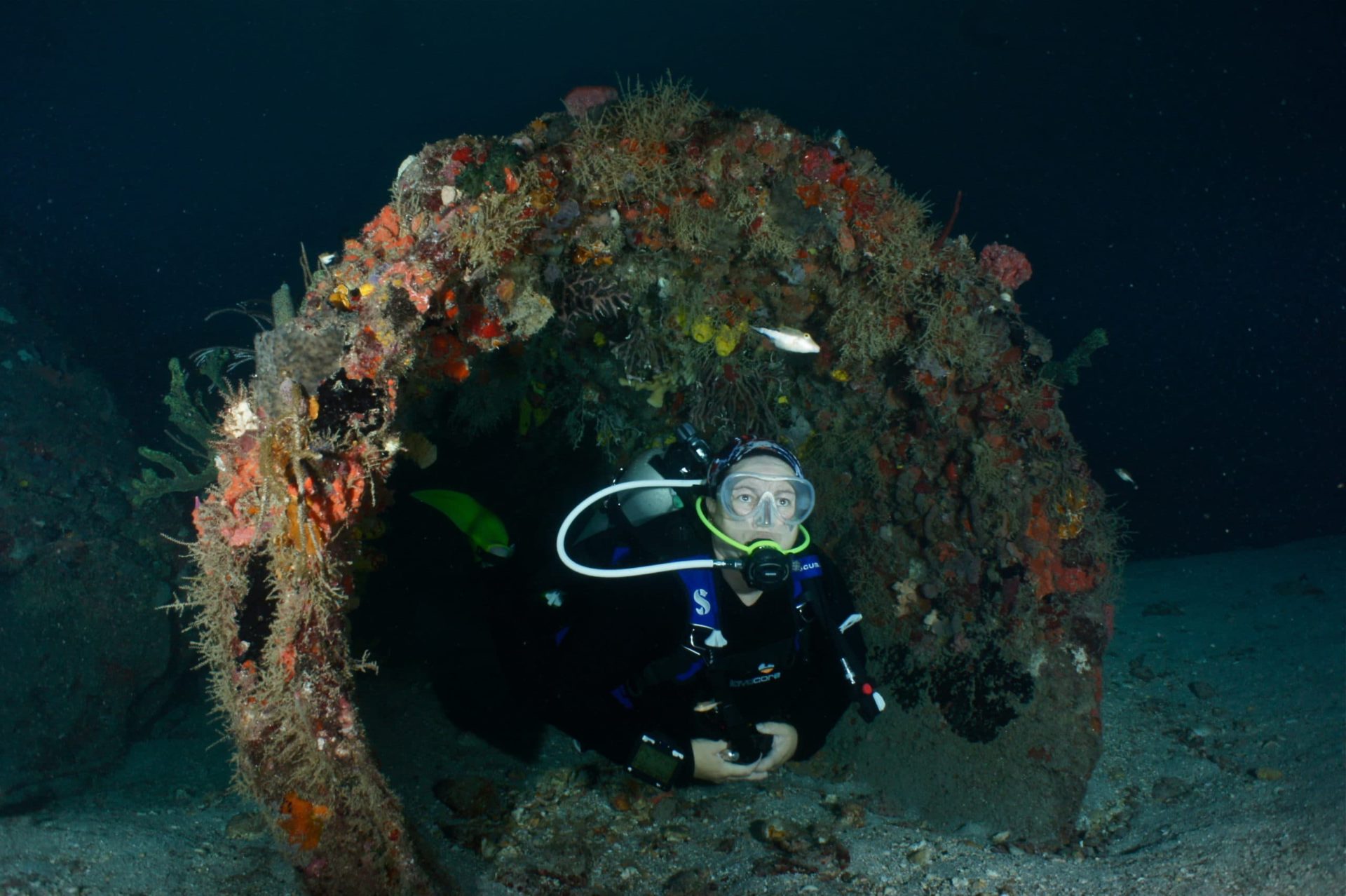 “Go, go, go!” said skipper Darrin, and like a bunch of demented lemmings myself and my fellow dive buddies flung ourselves off the back of the Safari Diver in a negative entry, arched down into a headfirst orientation and then started finning like crazy into the seemingly endless blue depths before us. For what appeared to be minutes, but in reality was a matter of seconds, we could see nothing, we were just finning blindly down into the deep, but then an indistinct shape appeared below us.

Suddenly it snapped into view as the water clarity cleared and a huge cargo ship was revealed, perfectly upright on the seabed and apparently steaming merrily past us! The current was running fast, and Darrin had dropped us with pinpoint accuracy north of the wreck, so we were coming down swiftly with the flow and had already passed the bow section. Doubling our efforts, we all managed to ‘land’ in front of the main bridge superstructure and tucked in out of the current, ready to explore. This was the RSB-1 wreck, and the ‘hot-drop’ entry was one hell of a way to make an introduction!

I was ‘in-country' to check out both sides of the Florida panhandle, but you can’t embark on a roadtrip across the mighty US of A without the appropriate transport. A scan of the Dollar website revealed that the price difference between a ‘standard’ saloon and a Ford Mustang convertible worked out at less than $12 a day, so that was it, total no-brainer – the only way to properly get into the true vibe of an American roadtrip was in a ragtop, and a muscle car to boot!

My first stop was Fort Lauderdale, with its beachfront promenade lined with bars and restaurants adorned with eye-catching signs, neon lights and numerous intriguing drinks offers, but I was actually heading to Pompano Beach, just a few miles up the coast, and while it is in close proximity to all the night-time fun of Lauderdale for après-dive entertainment, the area itself is quieter and the perfect location to base yourself for an east-coast dive adventure.

The Fort Lauderdale Marriott Pompano Beach Resort and Spa was my second home-away-from-home, and this newly opened hotel is extremely well appointed throughout, with spacious, comfortable rooms, fantastic beach views, a great pool bar and a swish main restaurant. It also has a full-on spa, which I have heard is outstanding, but I was on a hardcore diving mission, so didn’t take the time to find out for myself!

I was diving with South Florida Diving Headquarters, one of the charter companies used by Force-E, and handily they were literally a couple of minutes drive from the Marriott. The compact little dive centre is draped with diving flags, signs and slogans, so no chance of missing it, and SFDH’s three boats – two large catamarans (Black Pearl and Aqua View) and a smaller six-pack vessel (Safari Diver) – are moored just steps away. There is plenty of parking on-site, so no long-distance humping of dive kit is required.

Unfortunately, the best laid plans never seem to come to fruition. The mixed weather I had been experiencing on my drive north from the airport was also in evidence in Fort Lauderdale, and so when it became obvious I might lose full or half days to storms, we devised a more-flexible itinerary where I could jump on whatever boats were going out, and failing that head off on the six-pack Safari Diver for special Scuba Diver-only forays if the normal schedule was canned.

One of the main benefits to diving out of Pompano Beach and Fort Lauderdale is the fact that the three-tiered reef system slopes off right from the beach, so you can be moored up close offshore and be in 130ft of water. No long boat rides here, and even the 45-minute runs are along the coast as opposed to heading out into the Atlantic.

I lucked out on most days and was able to get out on to the scheduled dives with other customers, at least in the mornings, only losing one full day to the weather, but on a couple of occasions I went out with a few handpicked buddies and a captain to hit some of the better wrecks, hence the ‘hot-drop’ style of diving described at the beginning!

There are a multitude of wrecks to dive off of Fort Lauderdale and Pompano Beach, with a veritable fleet of artificial reefs lying in depths ranging from 60ft-70ft to way beyond recreational depths. There are also a host of shallow and mid-range reefs for those who get tired of rusting metal, but I have to say, due to the often-strong currents that flow over these wrecks thanks to the Gulfstream, the sheer amount of marine growth and life on them means even non-wreckies will be in their element.

On virtually every dive I was greeted by large barracuda and shoals of jacks, with occasional spadefish and pompano putting in an appearance, and on the wrecks themselves you can find all the usual reef suspects, including snapper, parrotfish, grunts, damsels and angelfish.

Among the more-outstanding wrecks we dived were the Rodeo 25, a 210-feet-long Dutch freighter sunk in May 1990 in front of over 100,000 spectators to commemorate the Pompano Beach Fishing Rodeo’s 25th anniversary. It sits at a slight list in 124ft and is dominated by a photo-friendly twin mast above the bridge.

The Rebel was also a Dutch freighter, which became an artificial reef after being caught smuggling drugs into the USA under its prior name St Andrea. It was donated to the cause by a local attorney, who renamed it after his dog, and was sunk in July 1985. The 127-feet ship sits upright with the bow pointing to the north, and the two forward holds are open, dissected by a bar between them, so plenty of opportunities for penetration.

The RSB-1 – which was renamed the Jim Togerson after the lead explosive expert with the Broward County Sheriffs when it was sunk in April 1994, but is still referred to predominantly by its original name – is a 160-feet-long oil company tender which sits in 104ft, is swarming with marine life and offers various routes inside the main superstructure and holds.

There are also a series of unique dives available off the Fort Lauderdale coastline, namely the ‘Wreck Treks’. There are four in total – Wreck Trek Deerfield, Wreck Trek Fort Lauderdale, Wreck Trek Boca and Wreck Trek Pompano – and each gives you the opportunity to dive three or more wrecks in one dive, if your navigation skills are top-notch and the currents are being kind. I completed two-and-a-half of the four, and they were simply spectacular, as well as being a lot of fun. The sense of satisfaction you get as another wreck looms out of the gloom is second-to-none, and all the wrecks are very different, so you get plenty of variety built into your dive.

There can be few things to compare with a drive ‘n' dive roadtrip. I mean, really, what can be better than a whole lot of cruising the highways in a ragtop combined with some superlative wreck diving in clear, warm waters? Even the odd spell of lousy weather couldn’t dampen my enthusiasm for proceedings, and mixing the underwater delights of Florida's east coast with the modern, vibrant topside attractions of Fort Lauderdale was a winning combination.

For any non-divers in your group, for non-diving days, or if you get blown out, there is plenty to do in Fort Lauderdale. If you want to stay on the water, you can cruise the intercoastal waterway (in a self-hire boat, in a wartime ‘Duck’ or even a restored paddlesteamer!), which extends all the way south to the start of the Florida Keys and creates a network of canals parallel to the main coastline, or you can head out on a sunset catamaran cruise, offering spectacular views and good entertainment. If fishing is your bag, then there are plentiful opportunities for big-game fishing, or if you want a bit more ‘zoom’ thrown in, then why not board an airboat for an Everglades tour? Then there’s always jetskis, parasailing and all the usual beach-related watersports on offer.

Topside during the day you can venture into the largest butterfly aviary in North America, explore 60 acres of native plants and trees in Flamingo Gardens, or just whip out the chequebook and enjoy the vast array of shopping available to you.

However, Fort Lauderdale really comes alive when darkness falls, and if you head out to Las Olas Boulevard, or the promenade area around Beach Place, you can be sure to find the bars full of like-minded people out for tasty food, cool drinks and a good laugh.

Force-E was founded in 1976 by Skip Commagere, and now has three locations in South Florida. Pompano Beach is one of the largest locations, with great proximity to all the best charter boats and boat ramp. Pompano Beach boasts easy access to the Shipwreck Park and other artificial reefs. Pompano has over 30 wrecks less than one mile off the coast. A different wreck can be seen each day of the week! The conditions in Pompano Beach are fairly consistent throughout the year – visibility is 60-80 feet, currents are typically north and drift diving is best in the summer, water temps range from 74-84F, seas range from 0-3 feet most days, and topside, the air temperatures are 78-88F and roughly 80 percent humidity.

Force-E has a friendly team of knowledgeable locals behind you to ensure you experience some of the best scuba diving in South Florida. Force-E regularly hosts local events including the famous Blue Heron Bridge night dives, beach and underwater clean-ups, kids events, educational seminars, fundraisers for non-profit ocean advocates, parties and more.