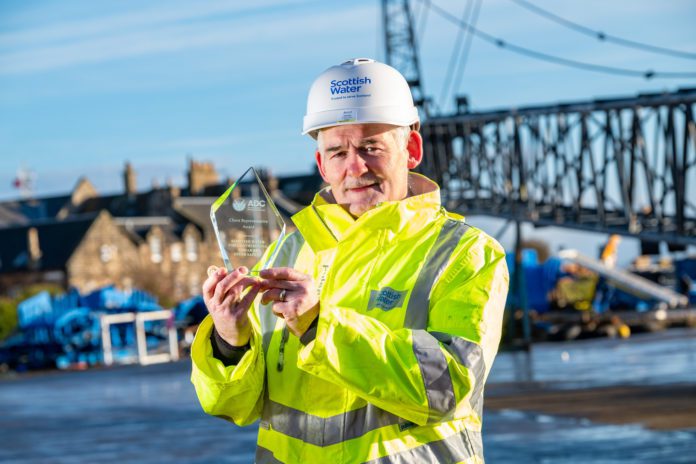 Scottish Water has received an award from the Association of Diving Contractors (ADC) UK in recognition of work to improve diver safety.

The company received a ‘Client Award' from the ADC for their efforts to improve their contractor selection and diving procedures.

Steve Wilson, H&S Manager and Peter Farrer, Scottish Water’s chief operating officer, received the award on behalf of the company in a ceremony at the offices of Burntisland-based Briggs Marine, experts in coastal, nearshore, offshore and subsea operations, who nominated the utility for the award.

Peter Farrer said: “Over the past year, the company have been working with an Aberdeen-based Diving Technical Authority (DTA), or diving consultancy, called DiveSource to review and improve its Standards and processes relating to diving operations.

“We now have an increased number of diving contractors available to us which will improve geographical coverage and response times in the event of emergencies or similar incidents which require help from divers. A Scottish Water diving standard has also been developed that sets out clear guidance on when and how to use diving contractors.”

Steve Wilson, who led the review with the DTA and diving companies, said: “Working with our DTA has really improved our understanding of the regulations, the hazardous environment that these companies operate in and the robust safety standards that must be maintained to ensure these dives are carried out safely. Improving our diving procedures benefits not only Scottish Water and the individual diving companies, but also other organisations who may use their services in the future. I’m pleased Scottish Water is helping to support this important sector.”

Alistair Blue, General Manager at Briggs Marine, said: “While operating in an industry where safety is paramount, Briggs Marine regularly reviews its standards to drive improvement and exceed regulatory requirements where possible.

“It is clear from the changes Scottish Water implemented recently, that they share this ethos. In acknowledging their client responsibilities and their diving contractors’ responsibilities for nearshore/inshore diving operations, improved procedures have been put in place ensuring they are compliant with the Diving At Work Regulations 1997.

“We recognise the great efforts Scottish Water have made to achieve this, which is why Briggs Marine Contractors nominated Scottish Water for the Association of Diving Contractors “Client Award” and congratulate them on their success.”

Sarah Hutcheon, Managing Director at DiveSource, added: “As a company that requires a great deal of diving to be carried out on its assets throughout the country, Scottish Water has recognised that the management of diving projects requires highly robust internal processes and a specific set of knowledge and skills.

“They have set out to ensure they have those and, by working with DiveSource, they have developed their tools and procedures and are in the midst of rolling out industry-leading online training to all relevant staff. Having also carried out a due diligence plan on their Diving Contractors, ultimately, they are contributing to an increase in diver safety on all their jobs in Scotland.”

Commenting on the award, Mr Farrer said: “Scottish Water is delighted to have received this award and the recognition for the improvements we have made to our contractor selection and management processes in relation to diving operations, which is obviously a very important issue for us because the health and safety of our staff, and those of all of our contractors including diving contractors, is a top priority.”