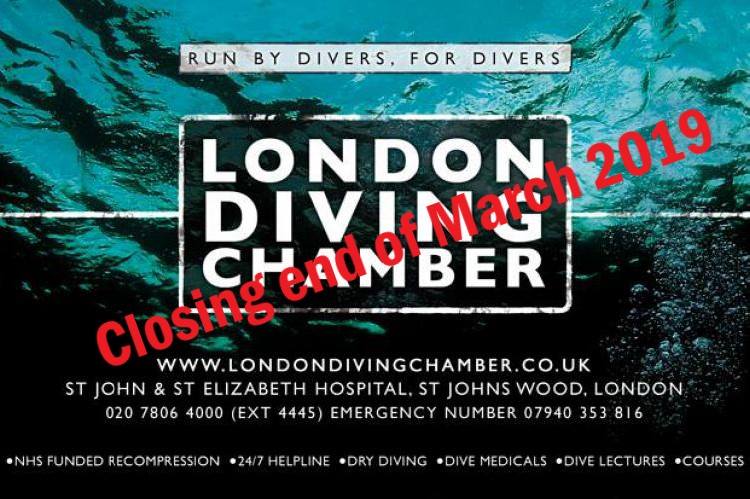 After 15 years of providing a medical service to the diving industry and recreational divers, the London Diving Chamber (LDC) at St John’s Wood, London, will close at the end of March 2019. This is a result of NHS England’s intention to halve the number of Recompression Chambers in London, i.e. leaving one chamber only. The London Hyperbaric Medicine (LHM) Chamber at Whipps Cross Hospital has been awarded the NHS contract for treating decompression illness in the London area.

Therefore, those divers with suspected decompression illness will no longer be able to be treated at the LDC. Dive schools, instructors and recreational divers will need to update their Emergency Action Plans to remove information about the LDC and replace it with another chamber. As Whipps Cross Hospital is in northeast London, those to the northwest of London may find that the Midlands Diving Chamber (MDC) at Rugby is now their closest and those south of the River Thames may find the chamber at Chichester their nearest. Remember there is also the British Hyperbaric Associations (BHA) national helpline emergency number that can assist you in finding an operational chamber.

The LDC was also one of the largest providers of both HSE Commercial Diving medicals and recreational fitness-to-dive medicals in the UK.

A spokesperson for the chamber said: “We thank the staff at the LDC for their dedicated service to divers over the years and hope that they now have more time to go diving themselves.”