An international team of maritime archaeologists are diving, excavating and recording the wreck site of Dutch ship the Rooswijk off the Kent coast.

They are excavating the storage rooms and living quarters in the stern of the ship and items such as large wooden seaman’s chests, pewter jugs and spoons, glass bottles, ornately carved knife handles and personal items such as shoes have been recovered from the wreck and brought to shore at Ramsgate, where they are being conserved. 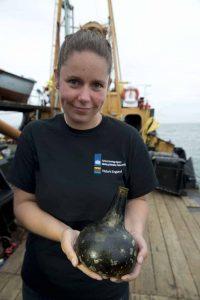 The Rooswijk was a Dutch East India Company (VOC) vessel which sank on the treacherous Goodwin Sands, off Kent, in January 1740. The ship was outward bound for Batavia (modern-day Jakarta) with a large cargo of silver ingots and coinage on board. Now a protected wreck site, the ship's remains are owned by the Dutch Government, and managed by Historic England on behalf of the Department for Digital, Culture, Media and Sport. The #Rooswijk1740 project is led and financed by the Cultural Heritage Agency of the Netherlands, as part of the Dutch Ministry of Education, Culture and Science.

Throughout this summer, maritime archaeologists are working to excavate and record large areas of the wreck site. The Rooswijk is threatened by currents and shifting sands, and an exploratory study of the wreck last year cemented the urgent need for the current excavation. The site is classed as ‘high risk’ on the Heritage at Risk register due to its exposed remains and vulnerability.

John Glen, Minister for Arts, Heritage and Tourism, said: “The shipwrecks around our coastline are amazing snapshots of Europe’s seafaring and naval history, and it is important that we study them while we can. The Rooswijk excavation will help recover and protect extraordinary artefacts, and I am particularly pleased that members of the public can see this important work in action.” 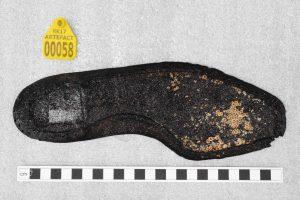 Alison James, Maritime Archaeologist at Historic England, said: “Wrecks such as the Rooswijk are time capsules that offer a unique glimpse into the past and tell a story. Sharing that story with a wide audience is a key part of this project and we look forward to the fascinating insights and discoveries that the Rooswijk excavation will uncover this summer.”

Martijn Manders, Project Leader of the Rooswijk Excavation and Maritime Heritage Programme Manager at the Cultural Heritage Agency of the Netherlands, said: “The Goodwin Sands has been a treacherous place for ships throughout the centuries and is now a treasure trove for archaeologists. It is also popular with sports divers. The rapidly shifting sands mean that the site is even more exposed now than it was during our initial dives to assess the condition of the Rooswijk last year. This makes the excavation urgent.”

Martjn Manders continued: “We are excited about this project because the Rooswijk is a showcase of modern underwater archaeology in which co-operation is essential. It provides unique opportunities for young professionals and the public to participate, and is a project through which we can learn about our shared past and who we are.” 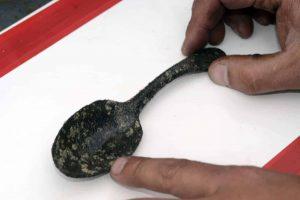 Material recovered from the wreck site is being taken ashore to a warehouse in Ramsgate, where first-aid conservation will be carried out and the items fully recorded. From here, finds will be taken to a Historic England storage facility where work to assess, analyse and conserve them will take place. The finds will be returned to the Netherlands and in future, some material may be made available for display in Ramsgate.

Maritime archaeology students are based at the Ramsgate venue and are benefiting from a programme of training delivered by Historic England specialists, as well as the opportunity to be involved in the project.

During the excavation, there will be open days (19 August and 16 September) and training sessions in Ramsgate. The public will be able to see extraordinary finds from the Rooswijk and explore the techniques and technology the archaeologists are using. 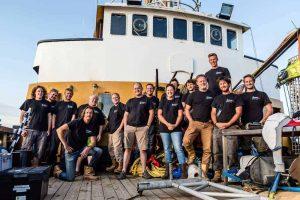