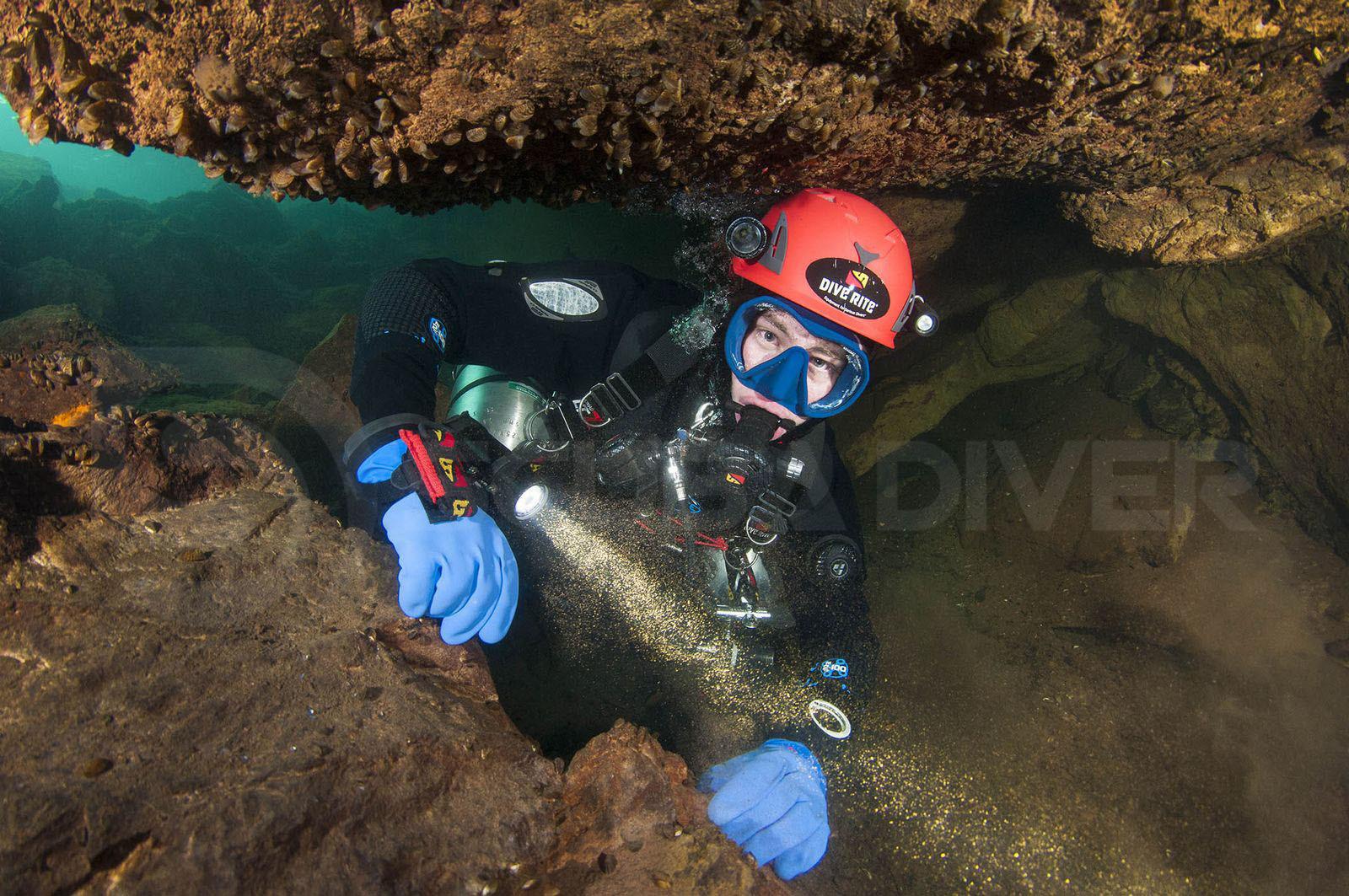 Ask most teenagers what they like to be doing on a weekend and they’d probably mumble something about hanging out with their mates. For 18-year-old Robert Thomas, though, his weekends are just a little bit different. Loaded down with sidemount tanks and a selection of lights to cut through the darkness, this quiet young man likes nothing more than pulling himself through mud, gravel, rocky restrictions and freezing-cold water to explore caves and tunnels deep underground.

While most parents would balk at the thought of letting their son take on such a hazardous endeavour, Robert’s father happens to be Michael Thomas – a TDI advanced full cave instructor and the training officer for the Somerset section of the Cave Diving Group (CDG). As Michael is keen to point out, Robert was never pushed into taking up cave diving – he just always wanted to do it. “Robert has always been involved in dry caving so it was inevitable that he would want to visit underwater caves. This gave me some pause for thought and we had many conversations in regards to risk and reward and the need for full understanding of the training and cave environment,” said Michael.

Robert became the UK’s youngest fully-qualified full cave diver when he turned 18. With a humble demeanour and quiet confidence way beyond his years, chatting to Robert gives a refreshing insight into the passion that drives him to do what he does…

Q. What made you want to follow in your father’s cave-diving footsteps?
A. I have been involved in dry caving since I was very young and have always found the underground environment fascinating. Having grown up around cave divers, exploring underwater caves was a natural progression. I wanted to explore places where even less people have been to, and possibly even places where nobody has been! I remember diving the Blue Hole on Gozo during my Open Water course when I was just ten. I found a small cave on the back wall of the hole and couldn't resist swimming into it – even then I was drawn to into the darkness!

Q. What is it about cave diving that appeals to you now?
A. There are many reasons why I love diving and especially the technical side of things, but the one that stands out to me the most is the fact it is so mentally intense, especially in a cave environment. The other big attraction to technical diving is the physical challenge, admittedly it’s not always enjoyable when you are carrying cylinders up steep muddy slopes in the rain, but when it’s done and you are preparing for a dive, it’s a huge feeling of satisfaction. As well as the fact, you still have the best part – the dive – to come.

Q. What would you say to those that think that someone of your age is perhaps less able to fully comprehend the risks involved in cave diving?
A. I don’t personally think that age has anything to do with a person’s ability to comprehend the risks involved in cave diving – I think it’s more to do with the training they have received. It’s really down to the individual’s experience base, mind-set and problem-solving abilities – not their age. I have always been taught that cave diving is low risk / high consequence, and for me personally, I love the feeling of being in control of a potentially dangerous situation.

Q. How do you think the training you’ve received from your father differs from what you may have received from another instructor?
A. The training I have received from my father has been to exactly the same standards as any of his other students. The difference is that I get to reinforce those skills every time I go diving with him. When mistakes are made they can be talked about and resolved with the help of a qualified instructor. You learn something new every day.

Q. What do your non-diving mates make of your cave diving antics?
A. Pretty much all of my mates are into some kind of sports, like mountain biking and climbing, which are cool in their own right. In regards to the response I get, most of them think it’s cool and definitely unique, although they appreciate that it might not be for them.

Q. What sites have you and your father explored here in the UK and which one has been your favourite? Any that you’re particularly looking forward to diving when you turn 18?
A. Places like Porth yr Ogof, Hurtle Pot, White Lady silica mine and Cambrian mine spring to mind. All are relatively easy access in regards to standard British cave diving. Some less-glamorous dives spring to mind too, such as sumps 1-9 in Swildon’s Hole. Accessing places like this take a lot more effort even though the actual dives are not very difficult, as the access is a huge mental and physical battle. When I turn 18, I am hoping to join the join the CDG (Cave Diving Group), which will allow me access to caves I’m really excited to dive, such as Gough’s Cave in Cheddar and Wookey Hole.

Q. Have you had any scary moments whilst cave diving?
A. ‘Adventure is just bad planning’, therefore I don’t enter these environments with the intention of scaring myself. Touchwood I haven’t so far, however I am sure that if my cave-diving career continues, especially in exploration situations, I’m sure there will be some hairy moments. That being said earlier this year, myself and my dad were diving in Cambrian slate mine when a large section of wall and roof decided to unattach itself. This hit me in the process, which was concerning – not only had the roof just fallen on top of me, but the visibility had reduced from a crystal 15 metres plus to absolute zero in the blink of an eye.

Q. It’s clear that you’re very driven – what’s your long-term goals and what do you see yourself diving in, say, ten years from now?
A. Ten years from now I would like to have accomplished some fairly big dives. I would love to be involved in expeditions to places like China with the aim of finding virgin cave, both dry and underwater. I would like to go to the end of the Fontaine du Truffe in France. It’s fair to say that the exploration side of things really gets me going and I would love to be able to name large amounts of virgin passage. I love diving shipwrecks too – the Britannic is definitely on my bucket list!