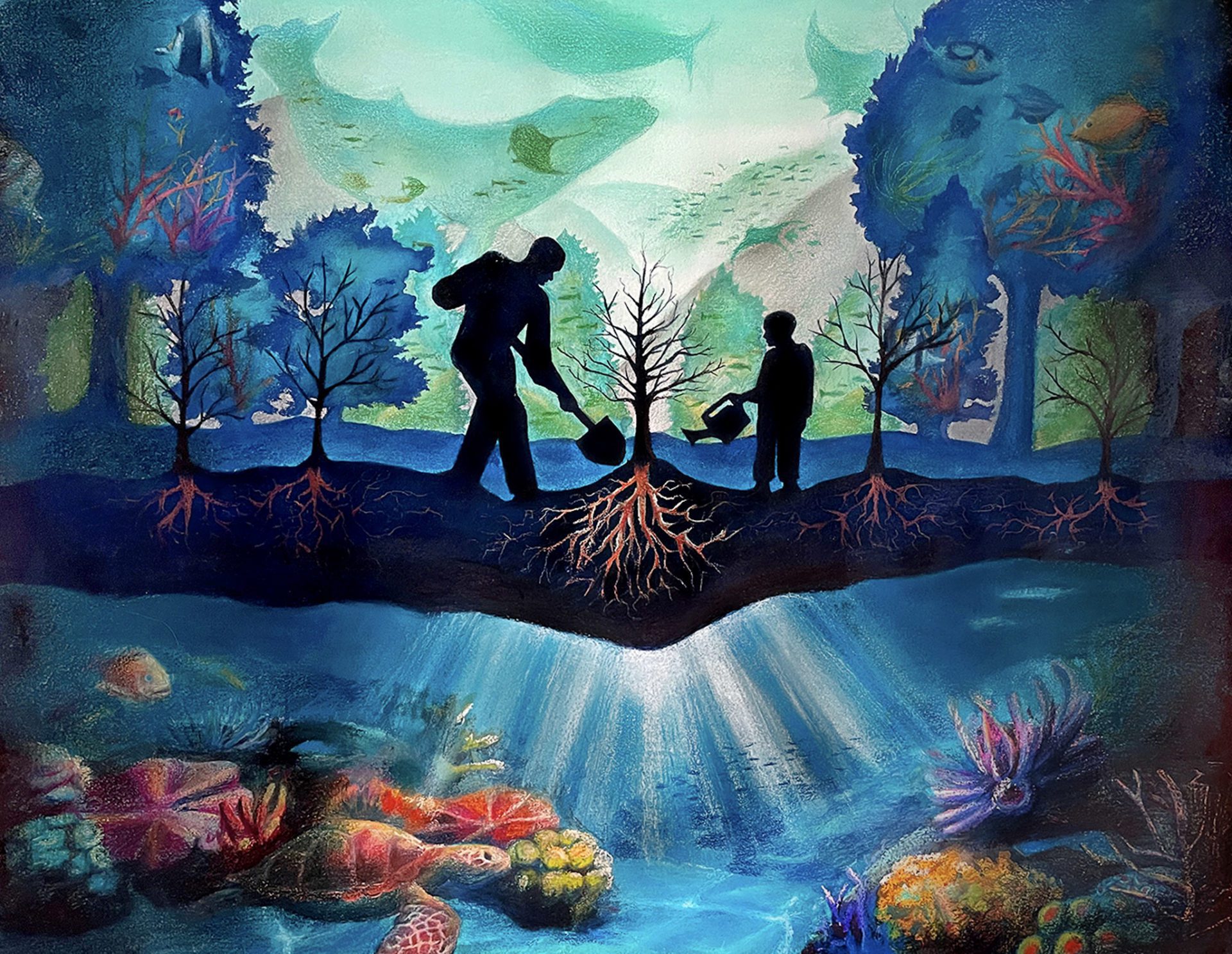 Announcing the winners of the 2022 Science Without Borders® Challenge

ANNAPOLIS, MD — The Khaled bin Sultan Living Oceans Foundation is thrilled to announce the winners of their annual student art competition, the Science Without Borders® Challenge. Now in its tenth year, this international contest engages students in ocean conservation through art, encouraging them to create artwork that inspires people to preserve, protect, and restore the world’s oceans. This year, students were asked to illustrate a ‘Ridge to Reef’ approach to coral reef conservation—and they delivered!

Over 500 primary and secondary school students from nearly 50 countries submitted artwork to the 2022 Science Without Borders® Challenge, sending in beautiful artwork illustrating what people can do to help coral reefs on land and at sea. Artwork in the competition was judged in two categories based on age. The winning entries in each category are beautiful pieces of artwork as well as excellent illustrations of how this ridge-to-reef approach to conservation can be used to preserve, protect, and restore coral reefs.

Yeonjae Lee won first place in the category for 15-19 year old students in the 2022 Science Without Borders® Challenge for her stunning artwork, Rooted in the Ocean. A 16-year old student at Seoul Foreign School in South Korea, Yeonjae’s artwork illustrates how planting trees helps to provide clean, clear water to coral reefs, allowing them to thrive. Yeonjae said that she learned a great deal about the connection between the land and the sea by participating in this contest. “It made me realize that without physically going to the ocean, there are countless ways that we can take action on land,” she said.

Coral reefs are incredibly important ecosystems. Although they cover less than 1% of the earth’s surface, nearly a quarter of all marine species spend part of their life on a coral reef. They also are a critical source of food and income for millions of people around the world. But coral reefs are in danger.

More than half of the world’s coral reefs have been lost in the past 50 years and we may lose most of the rest by the end of the century. One way the conservation community is addressing this coral reef crisis is by using a ridge-to-reef approach to conservation, which looks at the entire watershed to protect corals from local threats such as pollution, runoff, and sedimentation.

Yeonjae’s winning piece of artwork shows the importance of reforestation in conserving coral reefs. “The roots of trees act as forest buffers and help prevent pollution from entering the water by stabilizing the sediment,” she said. “The depiction of a father and son planting a young tree represents a hopeful future where the current generation can hold hands with the next generation to save the ocean.”

Second place in the category for 15-19 year old students went to Salwa Putri from Pasuruan, Indonesia for ‘DARMAYA’ Our Heritage, Our Nature, and third place went to Xixi Yu from Union City, California for her piece, When Water Flows from Ridge to Reef.

First place in the category for students 11-14 years old went to 11-year-old Amy Hyobin Pyo, a student at Tenafly Middle School and Studio YM in New Jersey. Her piece, Coral Reef in the Bosom of their Mother, shows how coral nurseries can be an important tool in coral reef conservation. Amy said she wanted to use her artwork to “send a message to the world that corals are in danger, and how people are saving them.” She hopes her artwork inspires people to help coral reefs in their daily lives.

This competition introduced students around the world to the plight of coral reefs and encouraged them to learn more about what can be done locally to save this critical marine ecosystem. Amy said the Science Without Borders® Challenge made her really interested in how scientists and researchers were saving corals, and discovered they were breeding corals to restore reefs. “I loved this idea and wanted people to know about it and support it,” she said.

Jeongwoo Lee, also from Tenafly, New Jersey, took home second place in the ages 11-14 category for her piece, One Connection, while Twiggy Chen from Richmond, BC in Canada won third place for her artwork, Marine Protected Areas.

Each of the winners will receive scholarships of up to $500 from the Khaled bin Sultan Living Oceans Foundation to celebrate their achievement so they can continue to pursue their interests in art and ocean conservation.

Through this competition, the Khaled bin Sultan Living Oceans Foundation hopes to educate students worldwide about the need to protect our ocean and inspire the next generation of ocean advocates. Amy Heemsoth, Director of Education at the Khaled bin Sultan Living Oceans Foundation, said that “students and teachers who participate in this competition continue to impress me with their evident passion for marine conservation and drive to make a difference. This gives me hope for our ocean’s future.”

The Science Without Borders® Challenge:

The Science Without Borders® Challenge is an international student art contest run by the Khaled bin Sultan Living Oceans Foundation to engage students in marine conservation through art. The annual competition welcomes entries from all primary and secondary school students 11-19 years old. Scholarships of up to $500 are awarded to the winning entries. Students and teachers interested in next year’s competition can learn more and apply at: www.livingoceansfoundation.org/SWBchallenge.