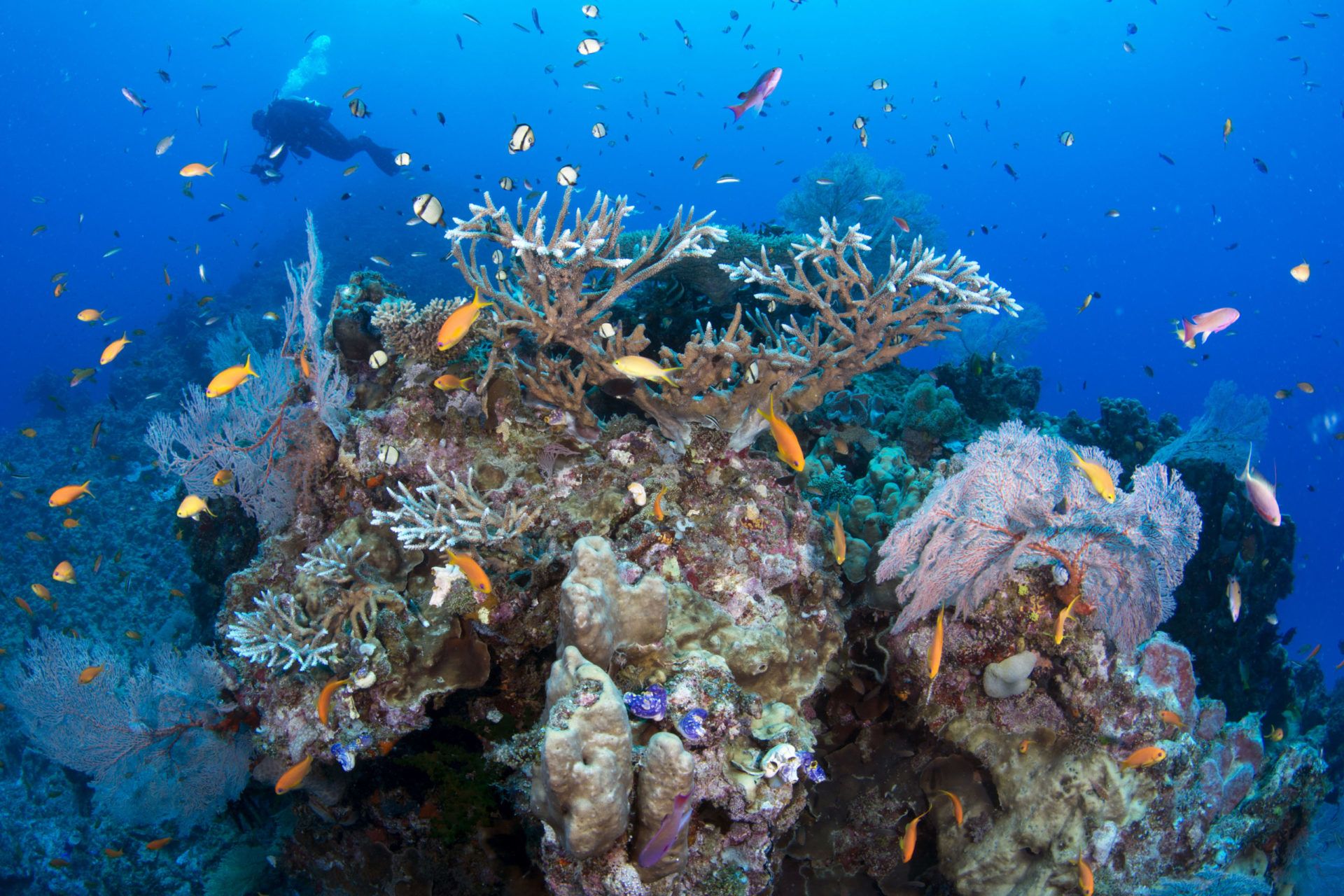 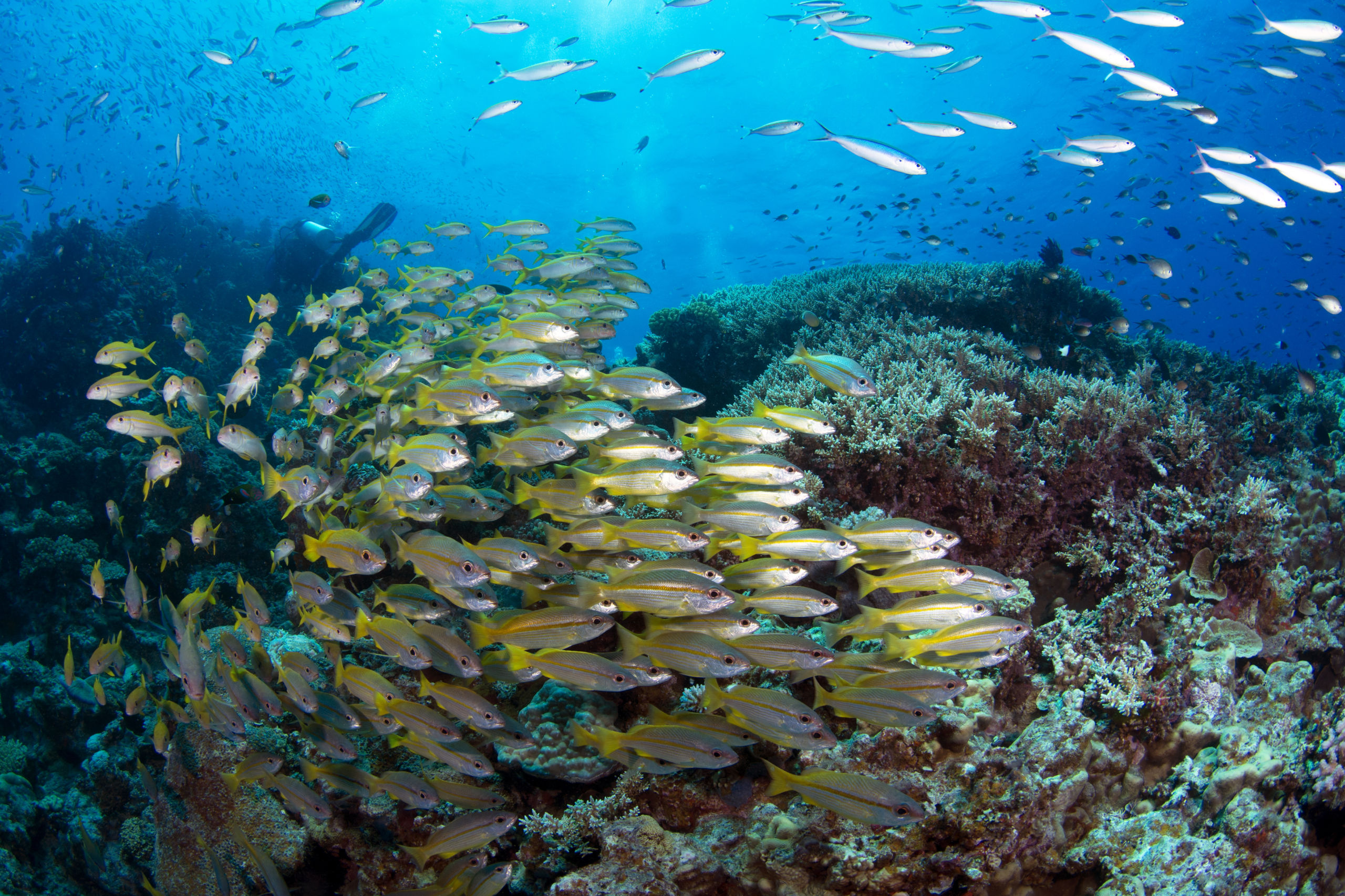 After enjoying two days of outstanding diving at Osprey and Bougainville reefs with Mike Ball Dive Expeditions, we relocated to the impressive ribbon reefs. There are ten ribbon reefs in total, and they run along the edge of the continental shelf a few hundred kilometres north of Cairns.

Nothing but the vast expanse of the Pacific Ocean lies before them. As a result, they are situated superbly to benefit from the abundance of nutrients that the Ocean currents have to offer. They provide a haven for a vast array of reef fish and a place for pelagic creatures like Manta rays and sharks to come and feed or receive a very welcome exfoliating treatment at one of the many cleaning stations. 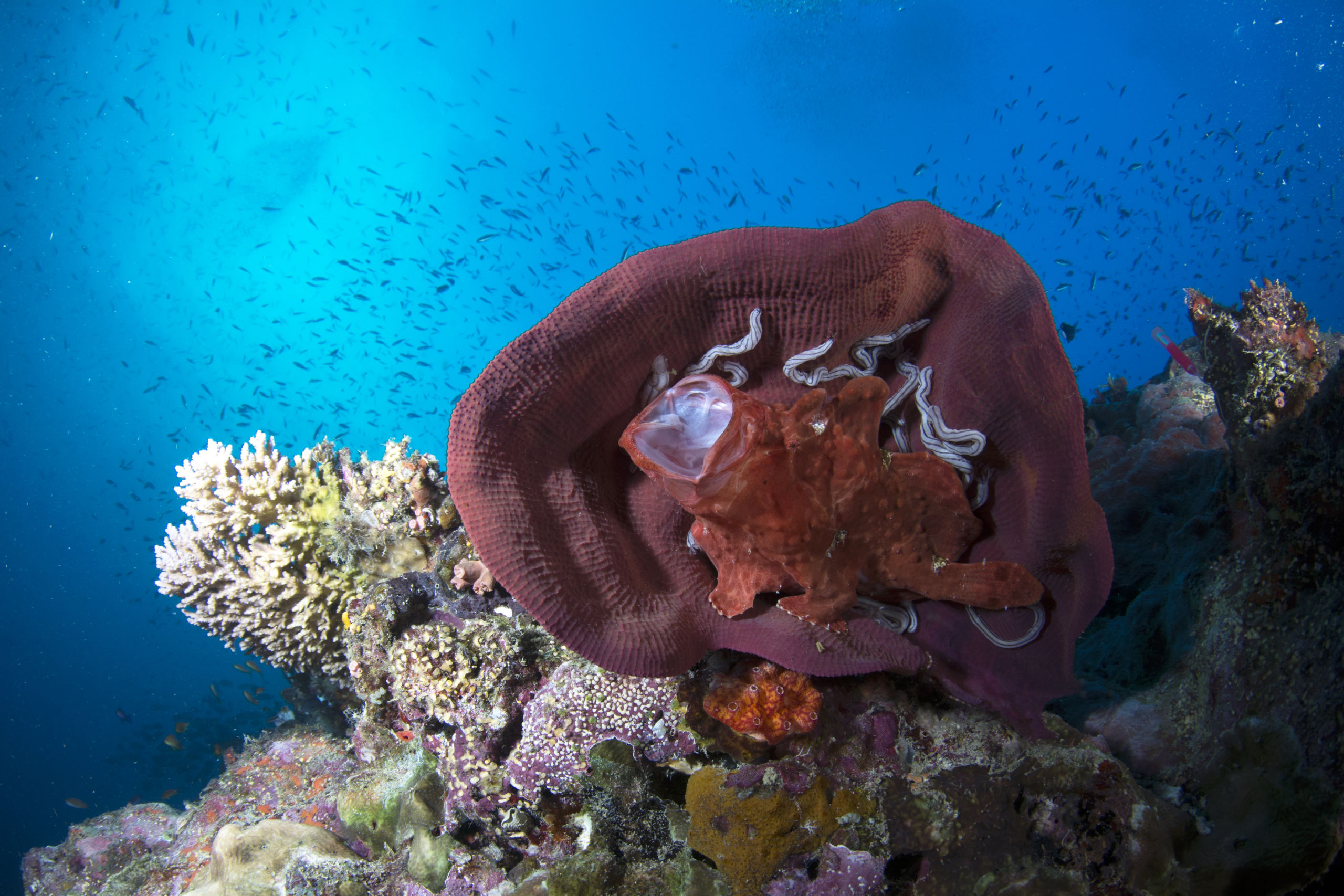 One of the first things that I noticed about diving on the ribbon reefs was the noise, the symphony of crackling and popping is created by tiny reef shrimps known as snapping shrimp. These diminutive crustaceans have one oversized claw that they snap together to stun their prey. This is done with so quickly and with such force that they create what is known as a cavitation bubble.

When the bubble implodes, it creates a shock wave that can reach speeds of 97 km/h, release one of the loudest sounds in the ocean and achieve a temperature of 8,500 F, which is almost equal to that of the surface of the sun. But unless you are the little shrimp’s unfortunate prey, this sound is a good thing. It is a clear sign of a healthy, vibrant reef.  The noise attracts juvenile fish trying to find a new home, they in turn attract the predators, and a healthy ecosystem is the result. 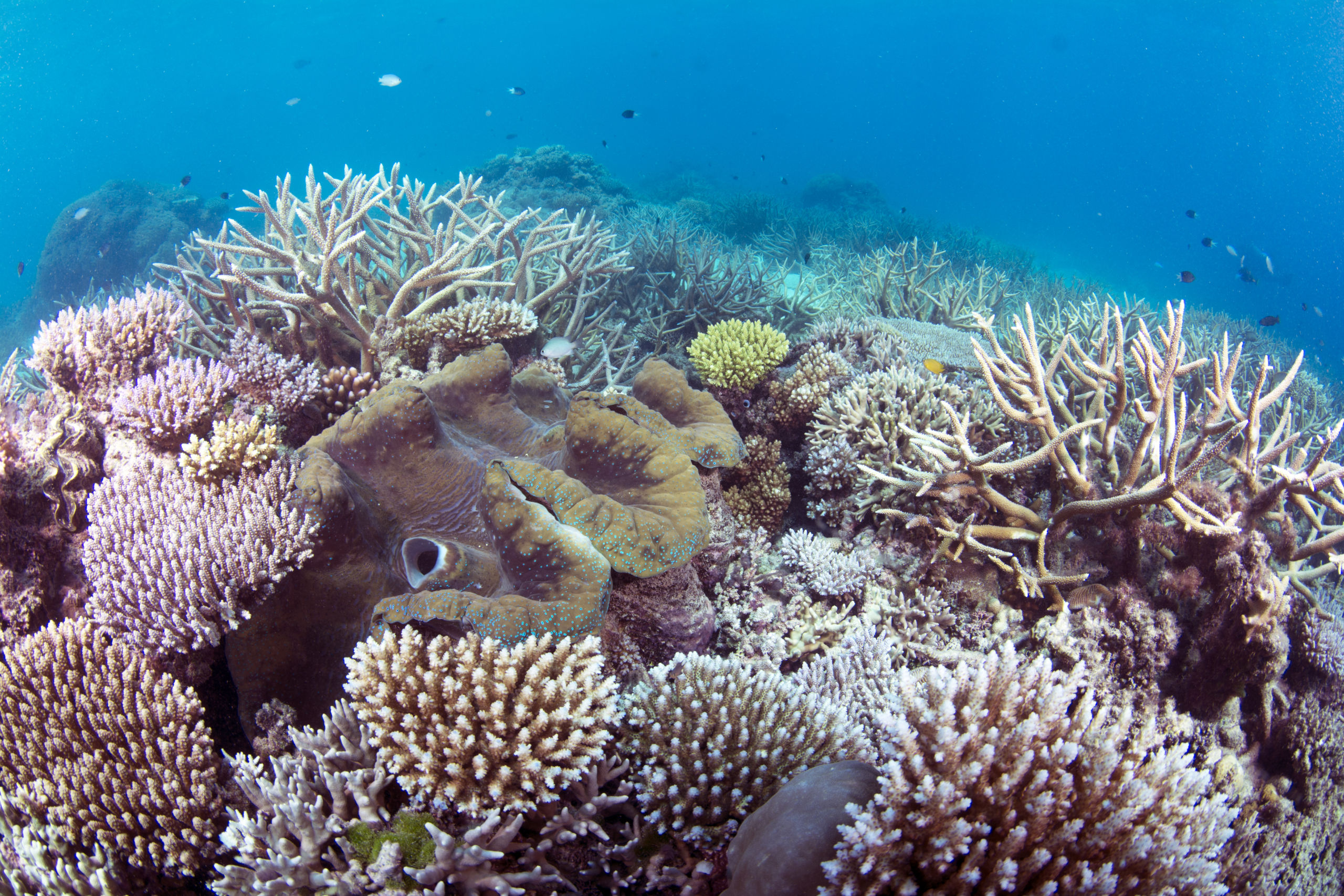 This fantastic reef system offers a very different experience to the sheer plunging walls, and isolated grandeur of Osprey and Bougainville. Predominantly comprising of hard corals, a labyrinthine of bommies of varying shapes and sizes sit on the sandy ocean floor, at significantly shallower depths than their counterparts in the wilderness of the coral sea. Besides fantastic hard coral gardens, the ribbon reefs offer incredible biodiversity and a catalogue of animal encounters from large over-friendly potato cod to small brightly coloured nudibranchs.

An unseen battle rages between rival coral colonies for reef supremacy. Prime real estate is hard to come by in this underwater metropolis, and the corals fight tooth and nail for their right to colonise their own little piece of reef substrate. There is often a clear band between rival colonies where they have killed each other off, usually done by digesting or stinging the enemy. Above the reef, the battle for life is just as intense. Small reef fish cower in the labyrinth of corals avoiding the unwanted attentions of cuttlefish, reef sharks and bluefin trevallies. 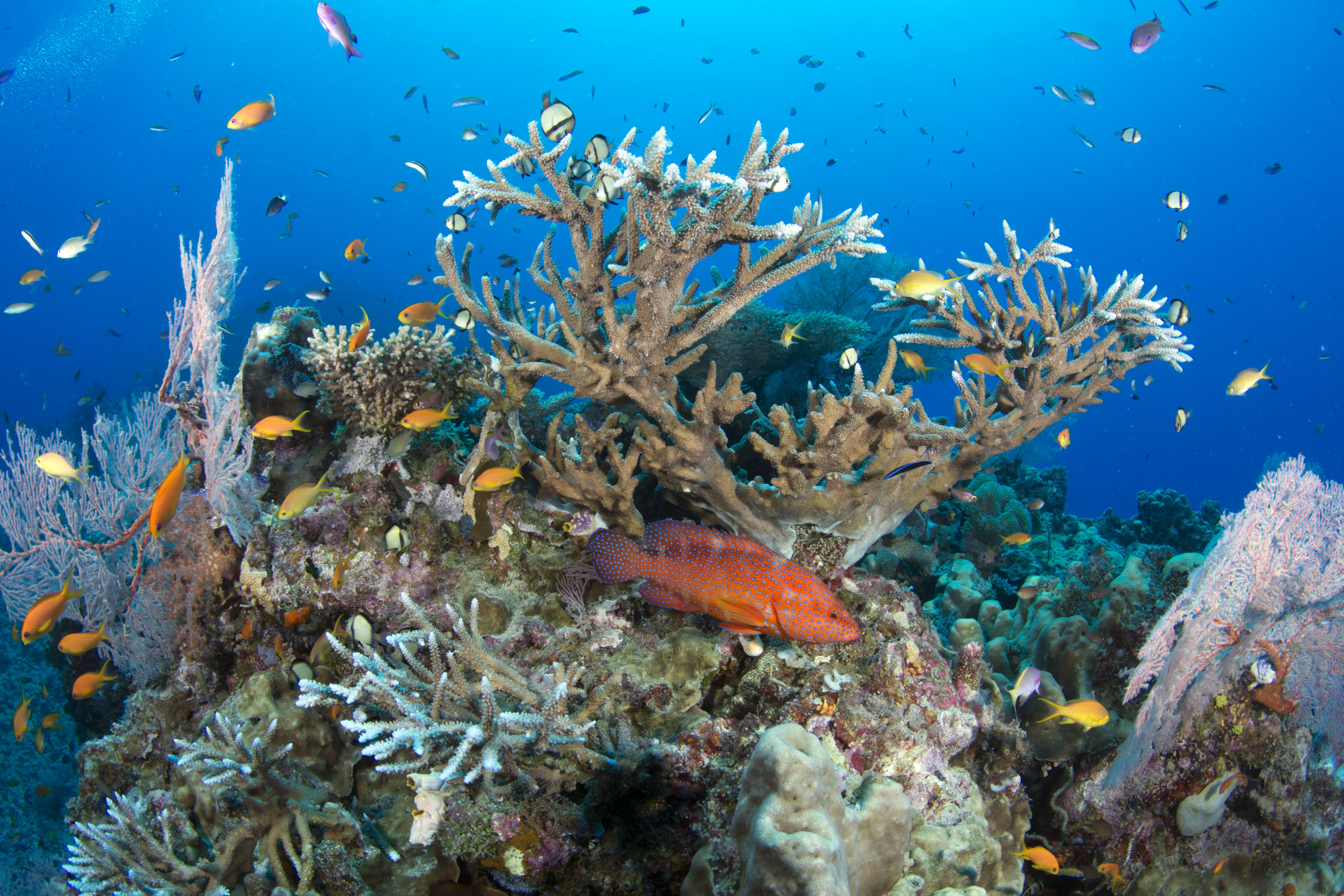 Ribbon reef number ten was the location of our first day of diving in the area. This reef is home to the famous cod hole, aptly named after the colossal potato cod, some up to 2 meters in length, that frequent the site hoping for a feed. Mike Ball no longer feeds these docile creatures, but they do drop a sealed bucket full of fish heads of the back of the boat to lure the monstrous cod in closer, although I don’t think they need much encouragement. They are inquisitive to say the least and the most challenging part of photographing these creatures is getting them far enough away from your dome port to get a good shot.

The diminutive pigmy sea horse can also be found at this site which could have potentially created a bit of a dilemma for photographers. Fortunately, it was at Cod Hole that we were introduced to the open deck policy that Spoilsport operates on some dive sites. 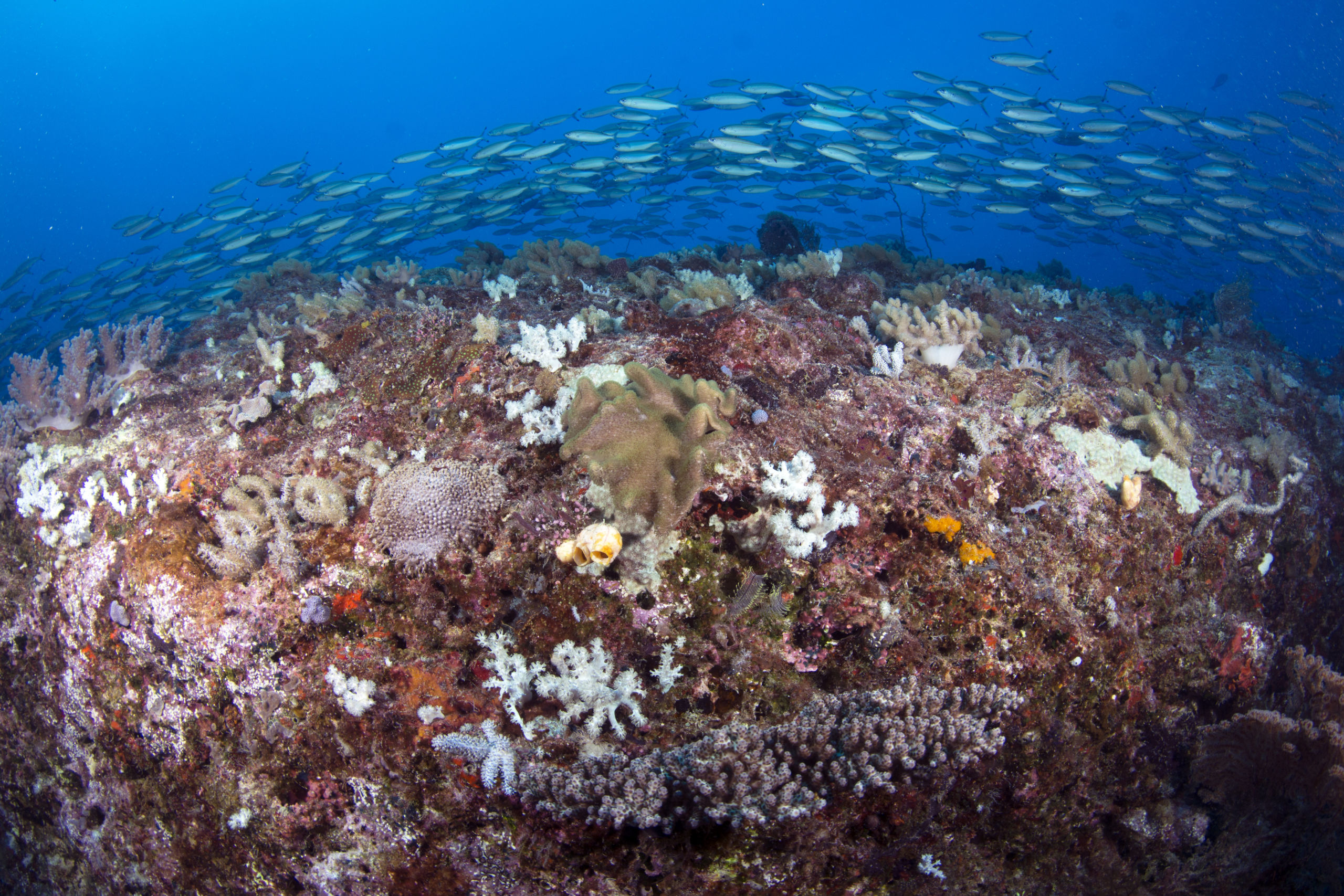 As long as you have a buddy or a self-sufficient diver qualification, you are free to come and go as you please. So, one dive with a wide-angle lens and one dive with a macro lens is possible. You do, of course, need to tell the crew when you are planning on diving and for how long. So, they can keep track of who is in the water. But other than that, the site is yours to explore at will.

The other reefs we visited were also exceptional in their own different ways, of particular note was Snake Pit, named after the sea snakes, that frequent this site. Although none were in attendance while we were there, we did encounter a large tawny nurse shark, white tip reef sharks, juvenile blacktip reef sharks and large schools of fusiliers. 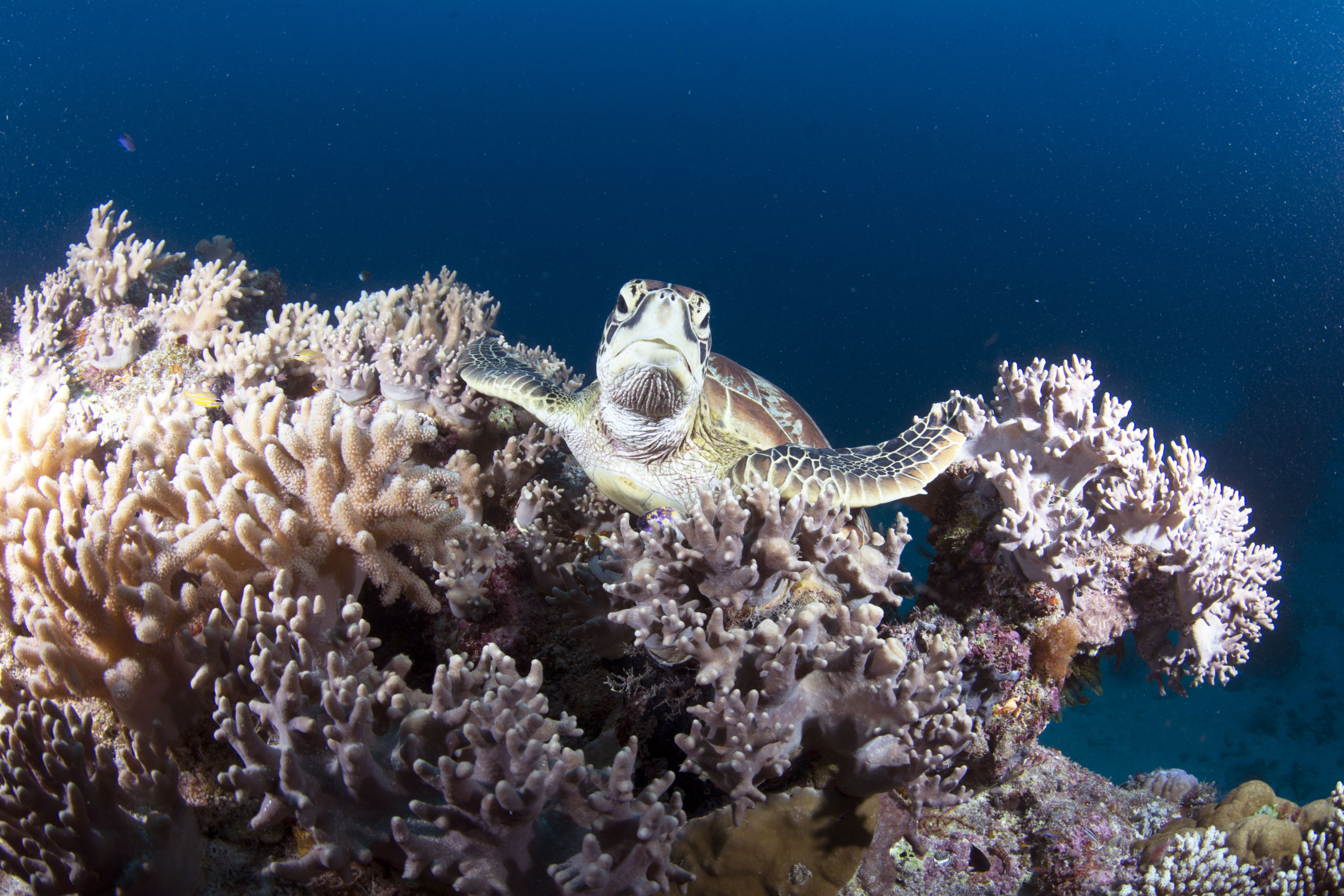 The rocky topography was encrusted with hard corals and decorated with crinoids of varying colours. Cuttlefish did their best to blend in with their surrounding while brightly coloured nudibranchs did the exact opposite. Mantas are also regular visitors, coming to the site to take advantage one of the numerous cleaning stations housed here.

For the final day the boat leapfrogged down the string of reefs back towards cairns. The first stop was at a site called Cracker Jack, a towering pinnacle that rises from a depth of 35 m to 10 meters below the surface. Huge sea fans cling to the side of this vast monolith, joined by whip corals and broccoli corals in a multitude of colours. A big school of big-eyed jack were suspended just off the reef in the water column, monitored by large tuna and sharks.  Back on the reef leaf scorpionfish swayed awkwardly in the current while a large moray eel poked menacingly out of its burrow. 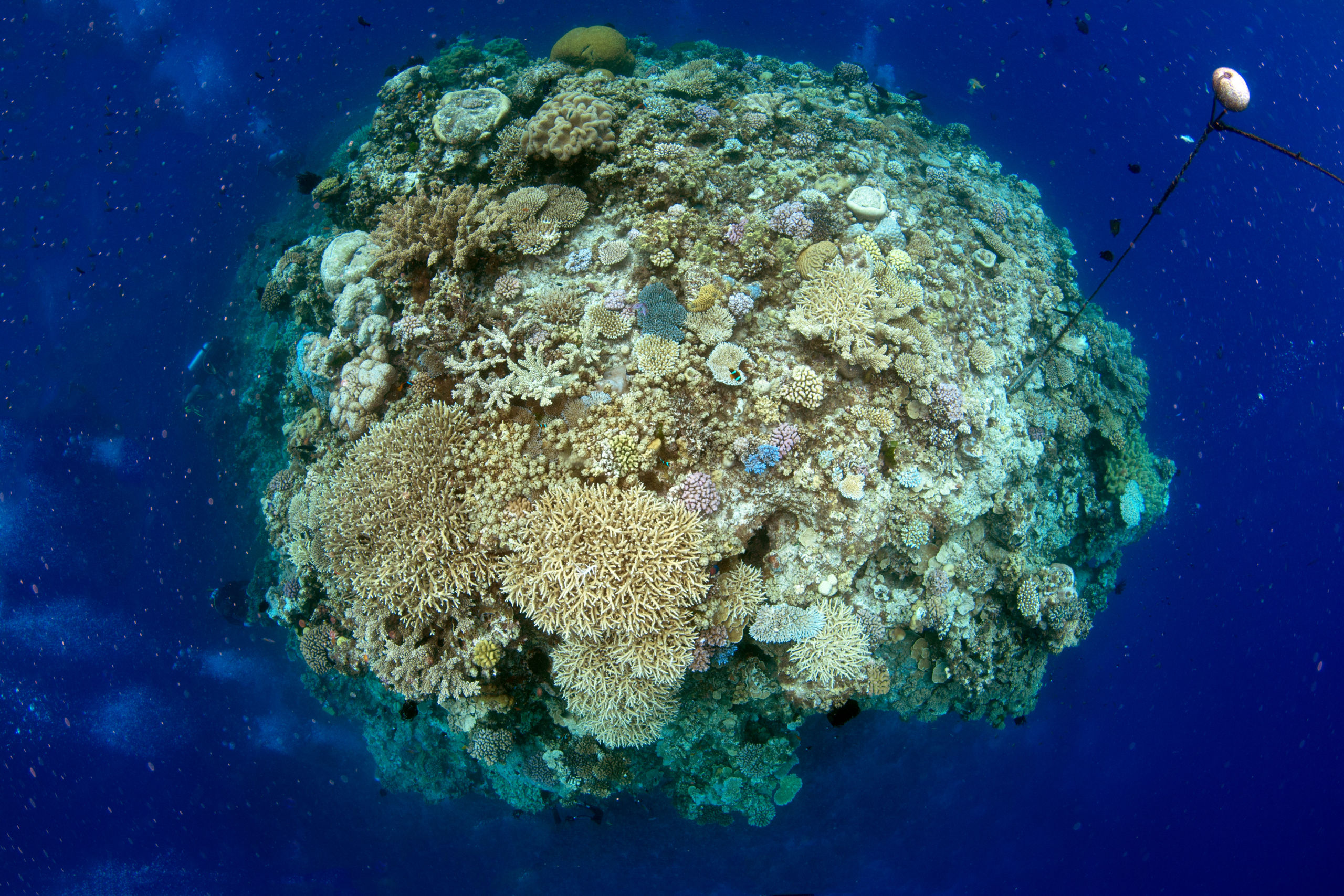 Next up was perhaps my favourite dive site on this leg of the trip, Steve’s Bommie. Here an impressive spire rose from 25 meters to just below the surface. At its base was a profusion of sea fans and hard corals, covered in a rippling mass of glassfish. As we spiralled up this coral-encrusted column, we encountered a massive school of yellow snapper and Luna fusiliers, giant frogfish and numerous ugly looking stonefish. Grey reef sharks lurked in the periphery of our vision. Anthias pulsed around its upper reaches and scores of anemones are anchored between the hard corals at its pinnacle.

Once again, the open deck was in operation, and this was particularly important at this site for two very good reasons. Firstly, this is a magnificent site, but it is relatively small. By the end of a dive, the tiny summit of the pinnacle would become very crowded if too many people were in the water at the same time. So, with an open deck, you can wait until you are the only person diving.  The other reason was the fact that I had an afternoon flight the next day, so after a very short surface interval, I could squeeze in another dive without pushing my luck. 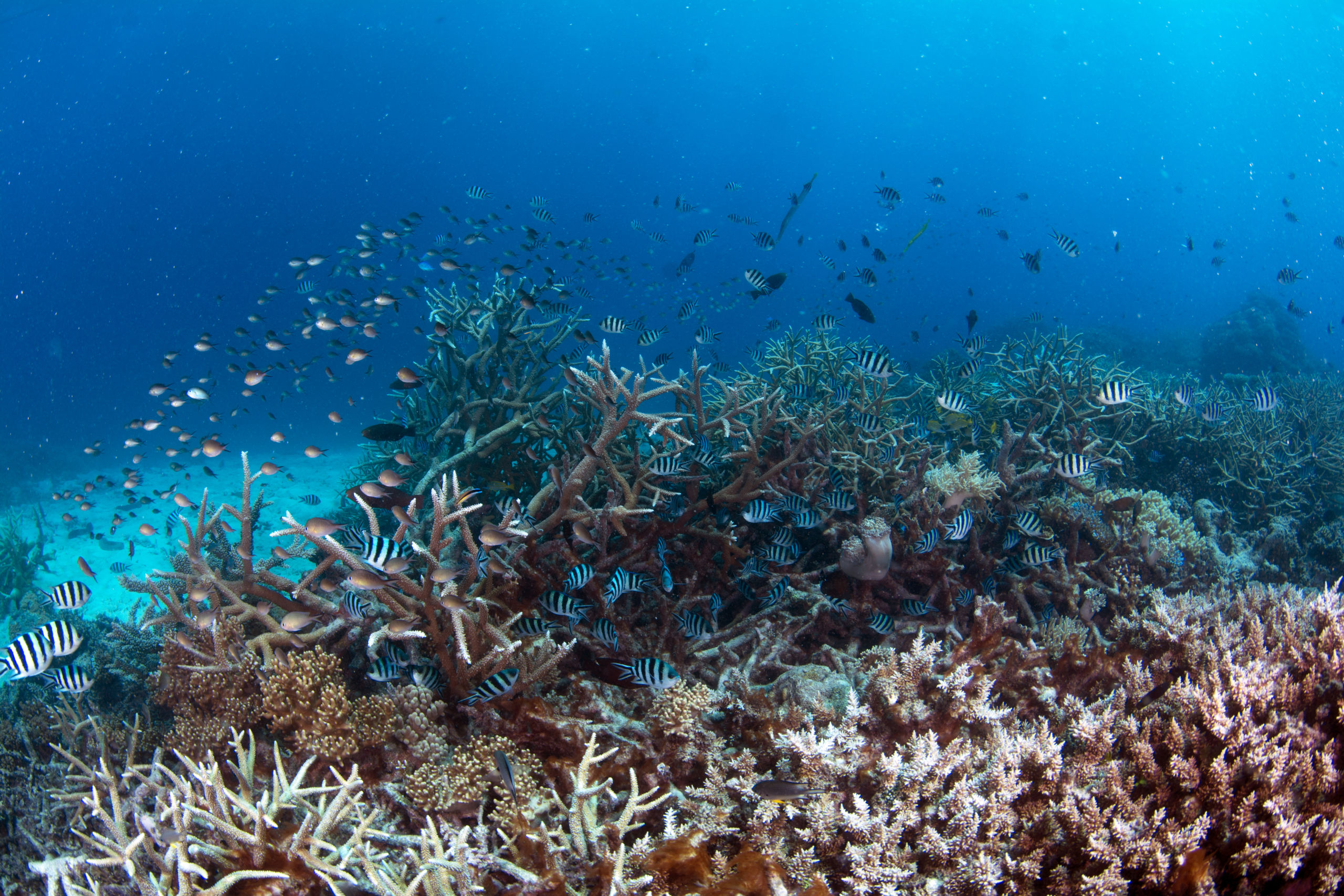 My travel planes did unfortunately mean I had to miss the final dive of the trip, which was a shame, but the Great Barrier Reef has left me wanting more so I am sure I will be back.

That evening we headed back to Cairns and were treated to the customary Spoilsport BBQ  & karaoke night. This included a singalong with the affable captain Peter,who is not only very experienced and knowledgeable but is also a talented guitarist. In fact, all of the crew were very approachable, knowledgeable and eager to help, it is clear that they are very passionate about their jobs and in particular the Great Barrier Reef. 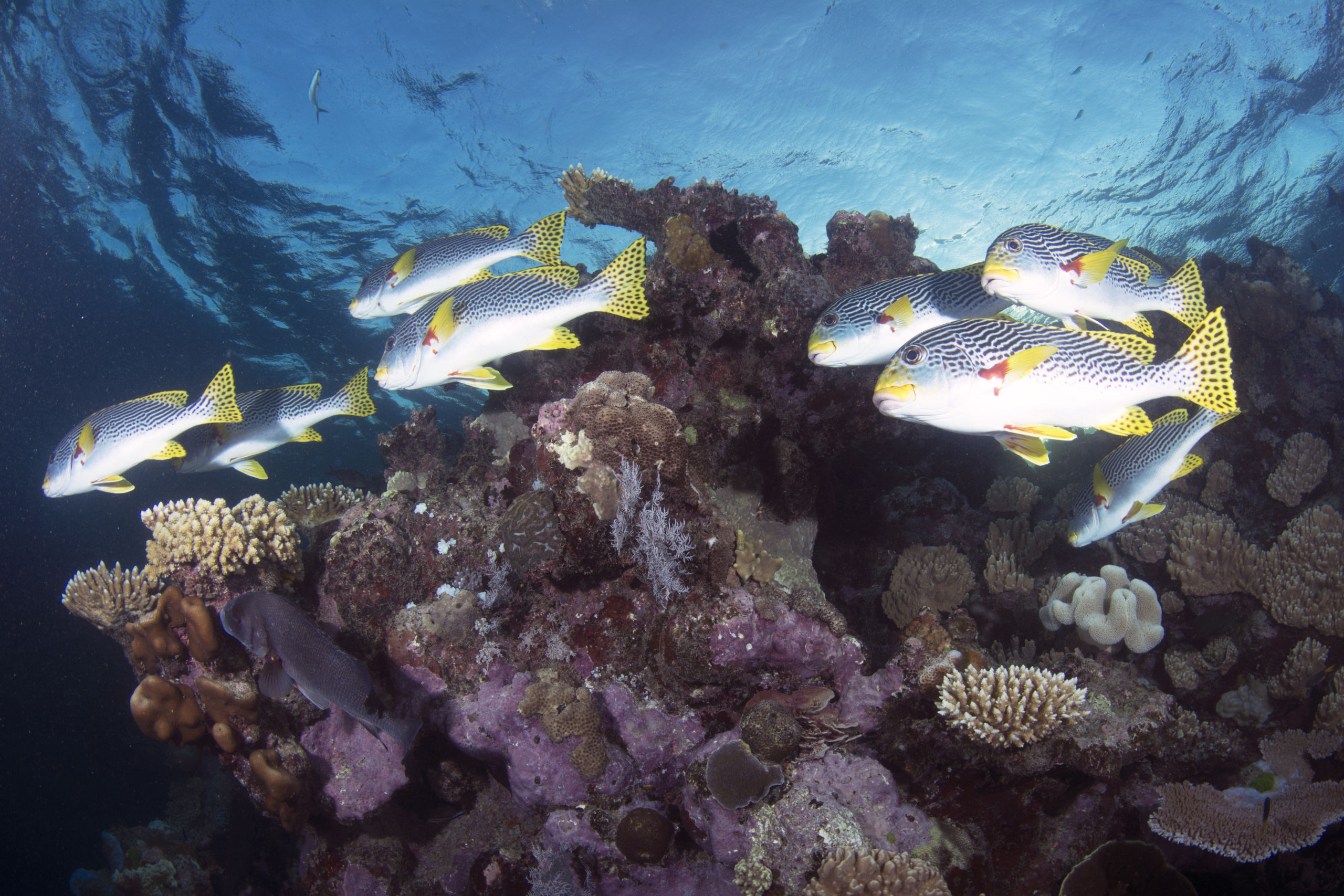 It was also evident that they were pleased to be out on the water again even if most of their spare time was spent relentless cleaning every surface as part of their COVID safe plan. Working on a boat in the COVID era must be challenging, but the crew coped admirably, and the quality of the trip and particularly the diving had not been adversely affected.

After disembarking the boat, I still had a couple of hours before my flight, unfortunately this was not enough time to enjoy a trip on the impressive-looking sky rail. I had wanted to experience this excursion before departing Cairns, but sadly and it had been closed due to COVID 19 Restrictions before my liveaboard. Sky Rail is a cable car that climbs the mountains that overlook Cairns, passing over ancient rainforest and towering waterfalls. The tour can also be combined with the Kuranda scenic railway for the return trip down the mountain. 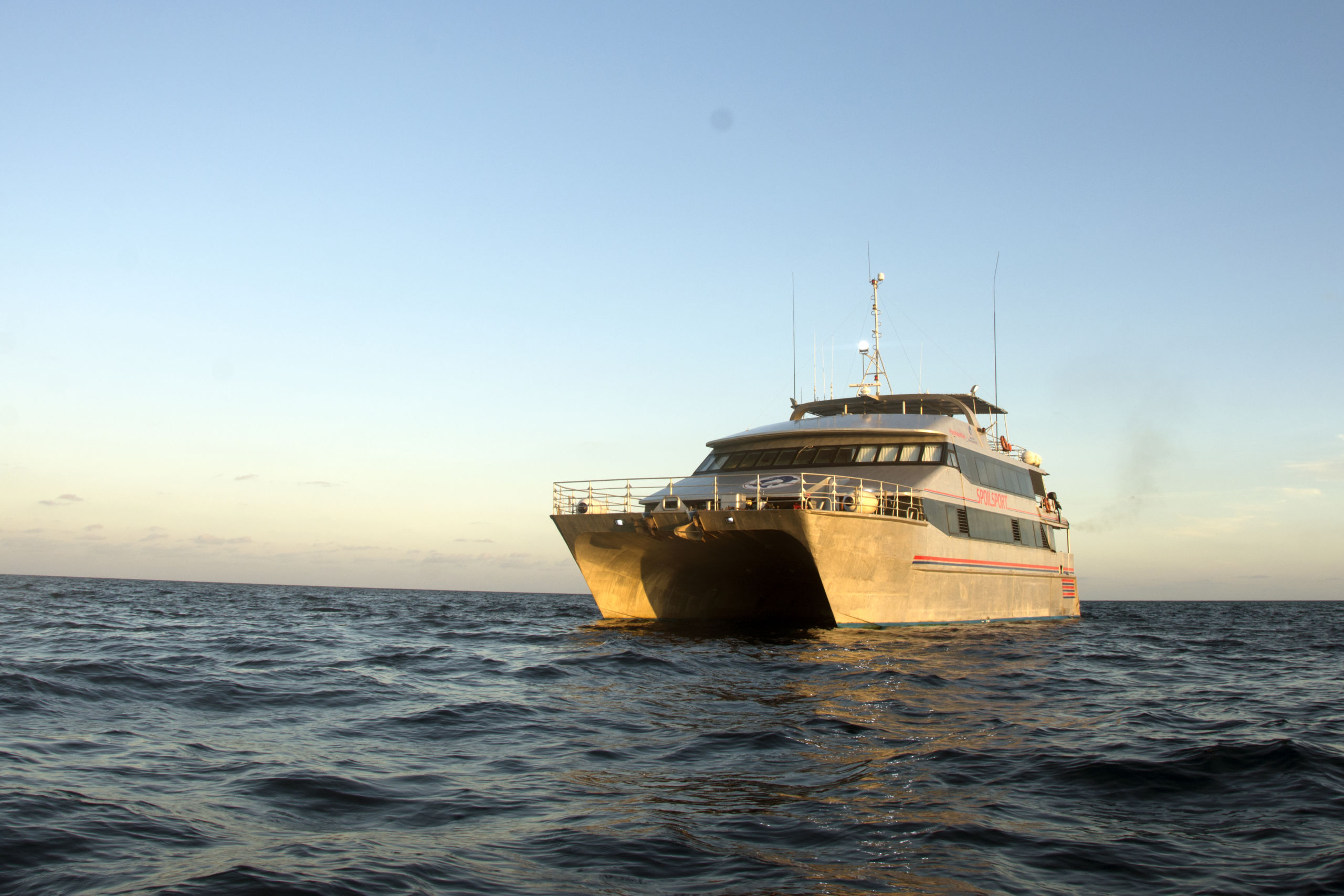 This excursion offers an excellent way to spend the day off-gassing rather than rushing to get on a flight like I had to. On reflection it would have been better to spend an extra night in Cairns, that way I could have enjoyed the last dive of the trip and some of the many above water activities that the region has to offer.

All in all, my visit to Cairns had been a real eye-opener. The vast array of above water actives that the region has to offer had been a very pleasant surprise.  The day boat diving that I had experienced with Passions of Paradise and Down Under Dive had exceeded my expectations, and my liveaboard trip with Mike Ball Dive Expeditions had been spectacular.

For Part 1 and Part 2 click on the links below.