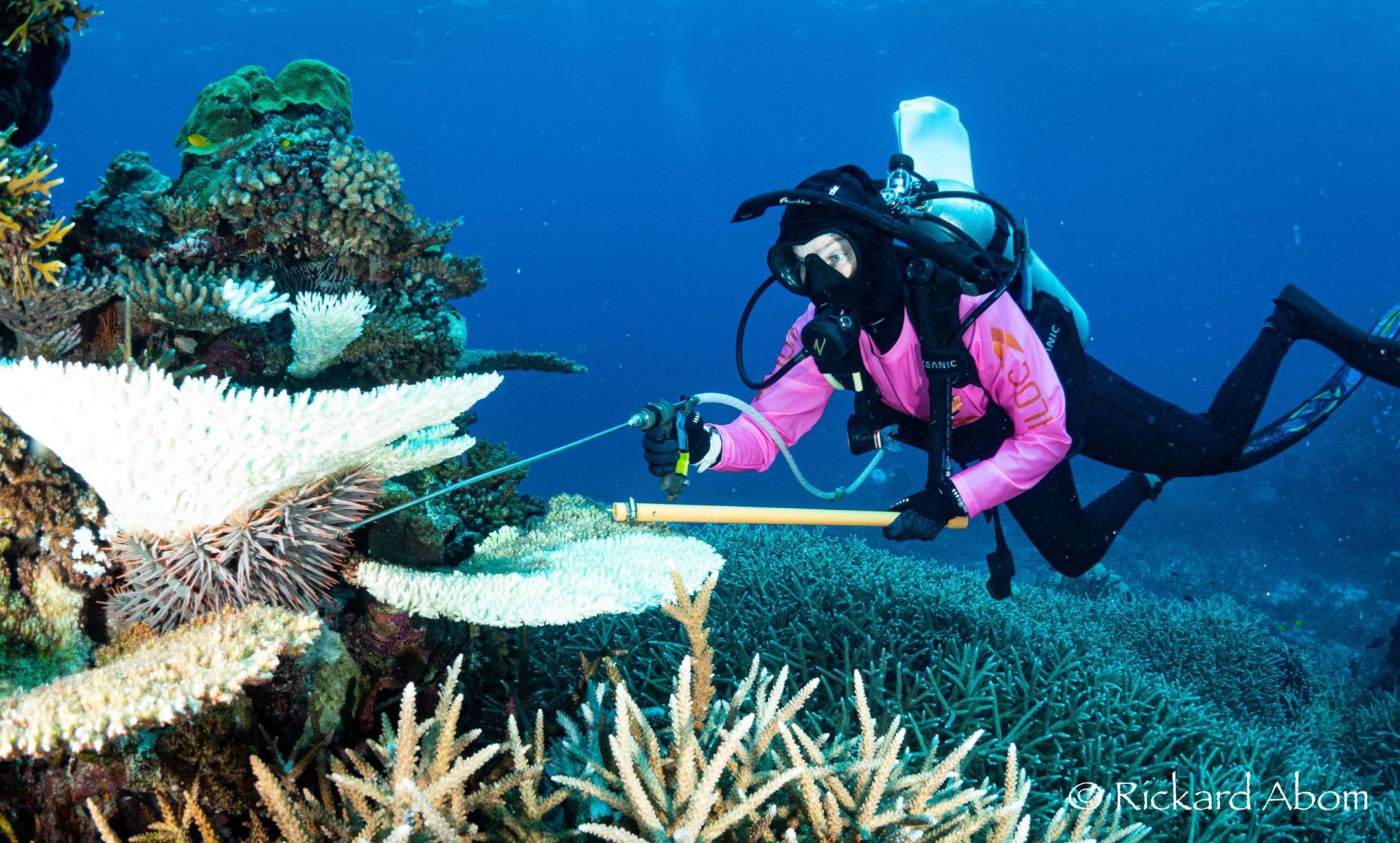 The two additional vessels – one directed by the Great Barrier Reef Marine Park Authority (Reef Authority) and the other by the Reef and Rainforest Research Centre (RRRC) – were deployed for their maiden surveillance and control missions in March, and are active right now on the Reef.

This is the first time the COTS Control Program has had the field intelligence and resources to detect and respond so quickly to be on the front foot to suppress the southward spread of this new outbreak.

“Over 1.1 million coral-eating starfish have been culled under the COTS Control Program since 2012,” Dr Beeden said.

“COTS are the world’s second largest starfish, known to grow up to a metre wide, and during an outbreak, the coral-eating predators can have a devastating impact, stripping a reef of around 90% of its living coral.

“The COTS Program has an existing fleet of five vessels and employs more than 100 trained divers who work to protect high value reefs but has rapidly mobilised an additional two vessels with each carrying out targeted surveillance and COTS culling through to October 2022.”

Great Barrier Reef Foundation Managing Director Anna Marsden said the Great Barrier Reef is an irreplaceable ecosystem, however outbreaks of coral-destroying Crown-of-thorns starfish are a significant threat to its health.

“The COTS Control Program is throwing a lifeline to corals, protecting the health of the Reef and the breeding corals that are critical to supporting Reef resilience in the face of a changing climate,” Ms Marsden said.

“Through the COTS Control Program, we’re tackling one of the greatest threats to reef health by detecting and responding to outbreaks of these coral-eating predators much earlier and faster than ever before with our partners the Great Barrier Reef Marine Park Authority and the Reef and Rainforest Centre.”

Managing Director of the Reef & Rainforest Research Centre, Sheriden Morris added, “This surge in control effort is an opportunity to actually constrain a new crown-of-thorns starfish outbreak and limit hard coral loss on the Reef from predation.

“The more coral kept alive to spawn, builds the overall resilience of the Reef and is one of the most direct and effective actions we can take.”

Since 2018, the COTS Control Program has taken direct monitoring and culling action on more than 81,000 high risk hectares of the Great Barrier Reef, encompassing 270 high-value reefs and removing over 320,000 coral-killing starfish. Due to the program’s strategic approach, it’s estimated that more than eight times that area – 675,000 hectares – has been protected from this significant threat to Reef health.