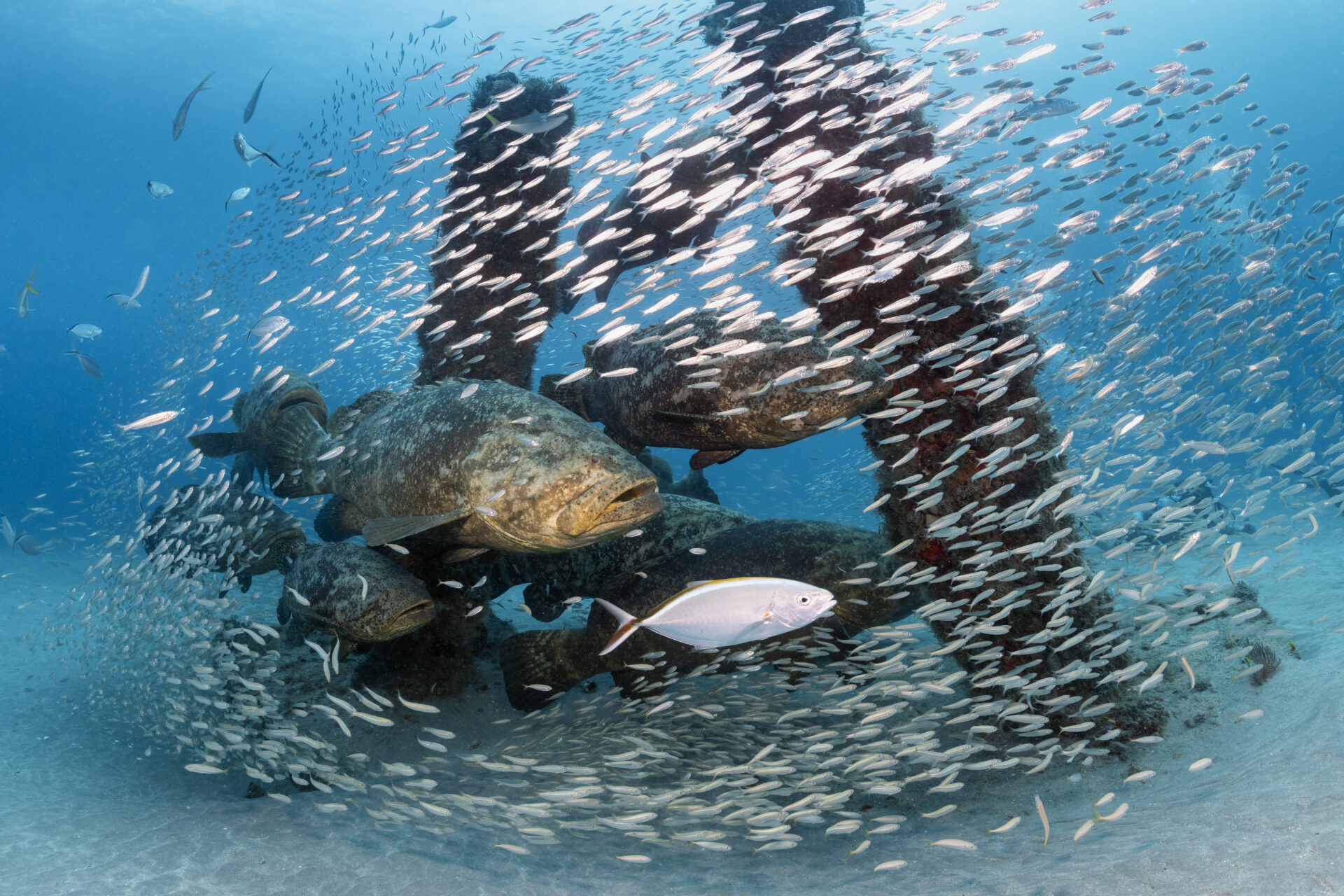 The unique marine life beneath Seaventures Dive Rig Across the...

Underwater photographer and writer Walt Stearns has been a staple on the diving scene for decades, and is Editor on our Scuba Diver North America title. We chat to him about the challenges of blackwater diving, his affinity for Goliath grouper, and why he loves his CCR so much.

Q: As we normally do with these Q&As, how did you first get into diving?

A: While I come from that generation where The Undersea World of Jacques Cousteau was the big documentary series on TV, growing up in South Florida, I plenty of other influences that drove me into diving. In addition to having the Florida Keys literally in my back yard, my father was one of my first mentors in that he had been very active in scuba diving since the late-1950s till the early 1970s, so it was pretty natural for me to fall into it.

Q: What came first – diving, or photography? Were you a land photographer before heading beneath the surface?

A: Oh, definitely diving, starting first with collecting tropical fish for my saltwater aquarium at the age of ten, and then getting my first scuba certification by age 16 in 1976. I didn’t pick up a camera till my senior year in high school. At that point I started borrowing my dad’s Nikonos I underwater camera, since he was no longer using it.

Q: You have been in the diving industry for a very long time, and over that period you have been involved with several different magazines around the globe. What do you look for in images when shooting for magazines?

A: To me, having an image that can tell a story. I found this to particularly true when penning a feature for a magazine, the images that would accompany it needed to not only support what I was describing, but also convoy the excitement, beauty and hopefully the intrigue of it.

Q: You were an early adopter of closed-circuit rebreather technology and still dive your unit regularly. What is it about CCRs that lend themselves to underwater photography?

A: Time. The first thing anybody should get out of their head when looking to get into diving with a rebreather is that you are not going to be able to sneak up on anything, except maybe your buddy. What it does give is more time to work. In addition to having longer dive durations at your disposal, when diving silent, you are far less obtrusive to your intended subject, resulting in a more-natural behavioural response like they would have to any other sea creature. From their perspective, I must look like a pretty f***ed-up sea turtle, so perhaps they are taking pity on me.

Q: Over the years, you have spent a lot of time on the road visiting exotic locations. What are some of your favourite destinations, and why?

A: I could be glib about a question like that and say preferably someplace in the water. But, if had to pick two regions in the world based on first-hand experience, than it would be both the Eastern Pacific from Mexico down to the Galapagos for its extensive collection of megafauna (sharks, manta rays, marine mammals, marlin, etc), and the Indo-Pacific from the Philippines down through Indonesia for its massive biodiversity.

Q: You live in Florida, and so have some awesome diving right on your doorstep. What are some of the best dive sites near your home?

A: As I somewhat mentioned earlier, when I was learning dive, I pretty much cut my teeth diving from Miami down through the Florida Keys. As I progressed in my interest, I started exploring both the east and west coasts, as well as several of the springs and caves up in the northern half of the state. But by far my most-favourite local site are the waters off Palm Beach County on Florida’s southeast coast. It has just about everything I could want, reefs and wrecks with lots of marine life, including sea turtles, sharks and Goliath grouper.

Q: You are an ardent supporter of Goliath grouper and their continued protection. What is it about these monster-sized fish that draws you in?

A: You kind of answered your own question there. Yes, they are monster-size fish, but they are no monster. In fact, they can be rather big babies. The number of encounters I have had with these big goofy fish going back to early spearfishing days to now where the only thing I shoot them with is a camera is well into the high hundreds. Never once I have felt threatened by one. If anything, they were the ones that sometimes felt threatened by me, leading the fish to take a defensive posture, entailing a false charge or two while emitting a few loud booming noises in the process. But, in the end, they generally retreat and even run for cover when they realize their bluff has been called.

Another thing to keep in mind is that as big as they (a full-size Goliath will weigh more than 450lb) they are also very fragile. During the 1970s and 1980s these were wiped out throughout most of their natural range in the western Atlantic, including Florida. Even after they were put under Federal protection in 1990, it took a considerable number of years before anyone began to see these fish return in enough numbers to form a spawning aggregation. More than three decades to be exact, for the first one to take place on Florida’s east coast at one lone site called the Hole-in-the-Wall off Jupiter. Now Florida (Palm Beach County on the east coast and the Southern Gulf of Mexico on the west) is the only place on Earth where anyone can see this event. We lost it once, damned if I will let it happen again because a few greedy people only want to envision this fish as a trophy to how many grouper sandwiches (with a side of mercury) they will make.

Q: You regularly extol the virtues of blackwater diving, which seems to be gaining in popularity. What are the main challenges of this form of underwater photography?

A: Well… when you get past the idea of jumping into a really big piece of open water in the black of night to hunt for a myriad of small (many the size of a fingernail) creatures. The exciting part is you never know what you find next. The challenging part is photographing what you have found, because in addition to you essentially floating in space with a subject that is not sitting still, the dicey part is properly lighting it up.

Q: What is your most-memorable diving experience?

A: I have had quite a few, so it’s hard for me to say which was the most memorable. If I had to draw on one, it would be during a trip to the Socorro Islands where my wife got to meet her first giant manta. One in particular was a true giant with a five-and-a-half metre wingspan, that we both got the enjoyment of swimming with the last two days of the trip.

Q: On the flipside, what is your worst diving memory?

A: Short answer, the ones that I have mostly forgotten.

Q: As we emerge from the spectre of the COVID-19 pandemic, what does the future hold for Walt Stearns?

A: Stay calm and dive on.