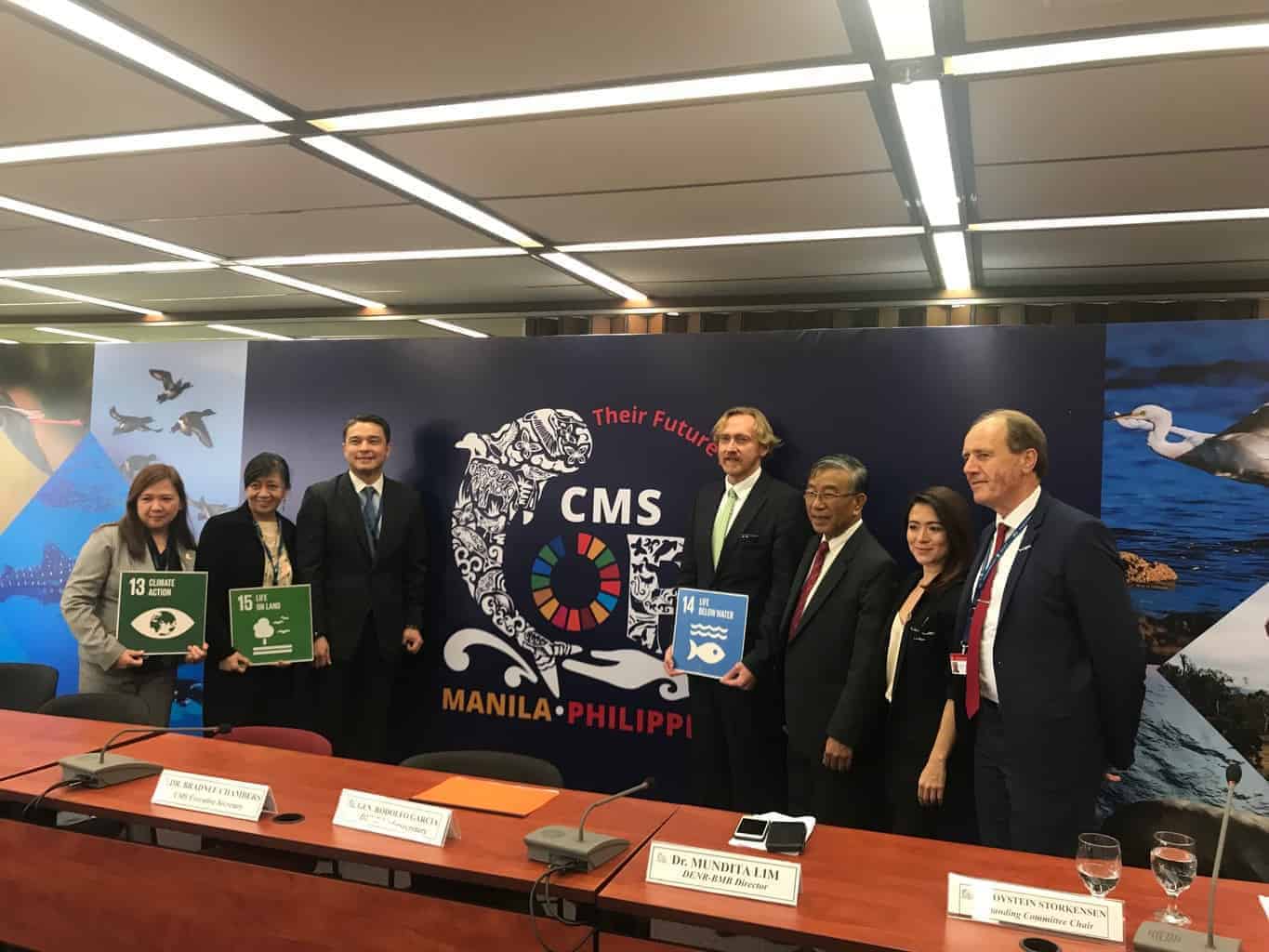 Over 90 governments attending the 12th Session of the Conference of the Parties to the Convention of the Conservation of Migratory Species of Wild Animals (CMS CoP12) in Manila, Philippines, from 23-28 October, have collectively endorsed actions on the conservation of migratory species, including sharks and rays.

CMS CoP12 saw many notable outcomes for migratory species, including all fish proposals, submitted by the governments of Honduras, Israel, Mauritania, Monaco, the Philippines, Samoa, Senegal, Sri Lanka, and Togo, being endorsed. The iconic whaleshark was up-listed to Appendix I. The proposal to list the angelshark on both Appendices I and II was adopted. And the dusky shark, blue shark, the common guitarfish, and the white-spotted wedgefish proposals were also adopted for listing under Appendix II.

While listing additional shark and ray species on CMS Appendices is a step in the right direction, many countries are yet to transpose the CMS agreements into their national, enforceable legislation. Without such action, the CMS species listings are toothless. So we’re welcome the Convention’s new compliance review mechanism and commitments by countries to step up their efforts to conserve migratory species.

As co-operating partner to the CMS MoU, Project AWARE joined two NGO statements to applaud the listings, but also to express our concerns about the lack of concrete action taken to date for listed species, such as the mako sharks listed in 2018. We underscored that the success of CMS listings for heavily fished shark species depends primarily on follow-up fisheries management actions. Throughout the CoP, we encouraged CMS Parties that are also members of ICCAT to propose and promote the mako protection measures advised by ICCAT scientists, in line with the 2008 CMS listing for the species. We were also thrilled to join a Shark Advocates International Side Event: Making CMS Work for Sharks and Rays – Spotlight on Makos, as co-presenter and Shark League partner, to share our #Divers4Makos perspective and encourage positive actions at the Regional Fishery Management Organisations meetings, consistent with the CMS obligations.

Under the theme ‘Their Future is Our Future – Sustainable Development for Wildlife and People’, the conference helps highlight that humans and wildlife are inseparably dependent on each other and acknowledge the indispensable contributions of wild animals to sustainable development and the many socio-economic benefits people derive from them. The CoP emphasised the importance of the opportunities that can be created through sustainable wildlife watching and ecotourism for livelihood support, national economies and community well-being. Project AWARE highlighted how following sustainable shark and ray tourism best practices can help build a better future for sharks and rays as well as local communities.

During the CoP, governments also agreed to cooperate on reducing the negative impacts of marine debris on migratory species. The ‘From a Plastic Legacy to Healthy Living Oceans’ side event highlighted the efforts of the Global Ghost Gear Initiative, an alliance of organisations, including Project AWARE, working to ensure safer, cleaner oceans by driving economically viable and sustainable solutions to the problem of ghost fishing gear globally. We also joined Antoinette Taus, UN Goodwill Ambassador and founder of CORA, in encouraging efforts to reduce single-use plastic.

CMS CoP12 is over. We continue, however, together with our Shark League partners, to press for implementation. Concerted action is critically needed for all listed sharks and rays, most urgently makos! Stay tuned and join #Divers4Makos in urging ICCAT member countries to end uncontrolled mako shark fishing.