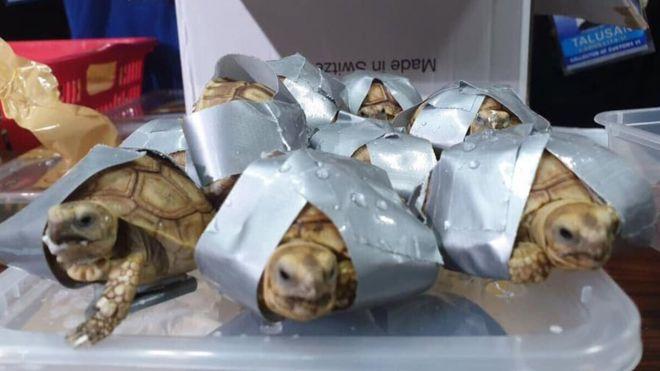 Philippine police have seized more than 1,500 live turtles and tortoises – valued at more than £60,000 in the illegal wildlife trafficking market – found wrapped in duct tape at Manila airport.

The reptiles were discovered in four unclaimed pieces of luggage, and police believe the bags were abandoned after the carrier – a Filipino passenger who was onboard a Philippine Airlines flight from Hong Kong – found out about the harsh penalties for illegal wildlife trafficking, which can be two years in jail and a fine of up to 200,000 pesos. 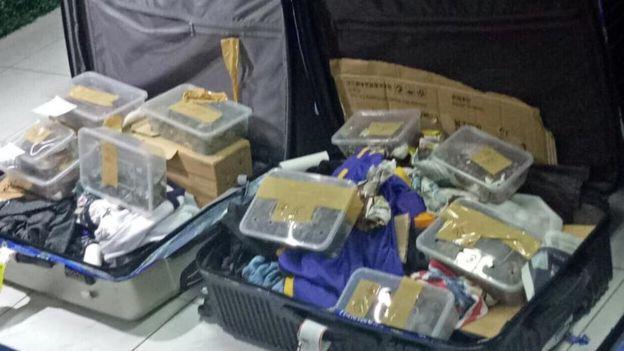 A total of 1,529 turtles and tortoises of different species were found in the luggage in the arrivals area of Ninoy Aquino International Airport on Sunday. Some of the animals were of the Sulcata tortoise species, which are recognised as vulnerable on the IUCN's Red List of Threatened Species. The red-eared slider turtle was also among the reptiles found. The animals have now been handed over to the Wildlife Traffic Monitoring Unit.

Turtles and tortoises are often kept as exotic pets, but are sometimes also used as a form of traditional medicine, or served as a delicacy, across parts of Asia. Their meat is considered by some to be an aphrodisiac, while the bones are powdered for use in medicine.

Last week, 3,300 pig-nosed turtles were smuggled into Malaysia by boat, though this attempt was intercepted by Malaysia's maritime agency.