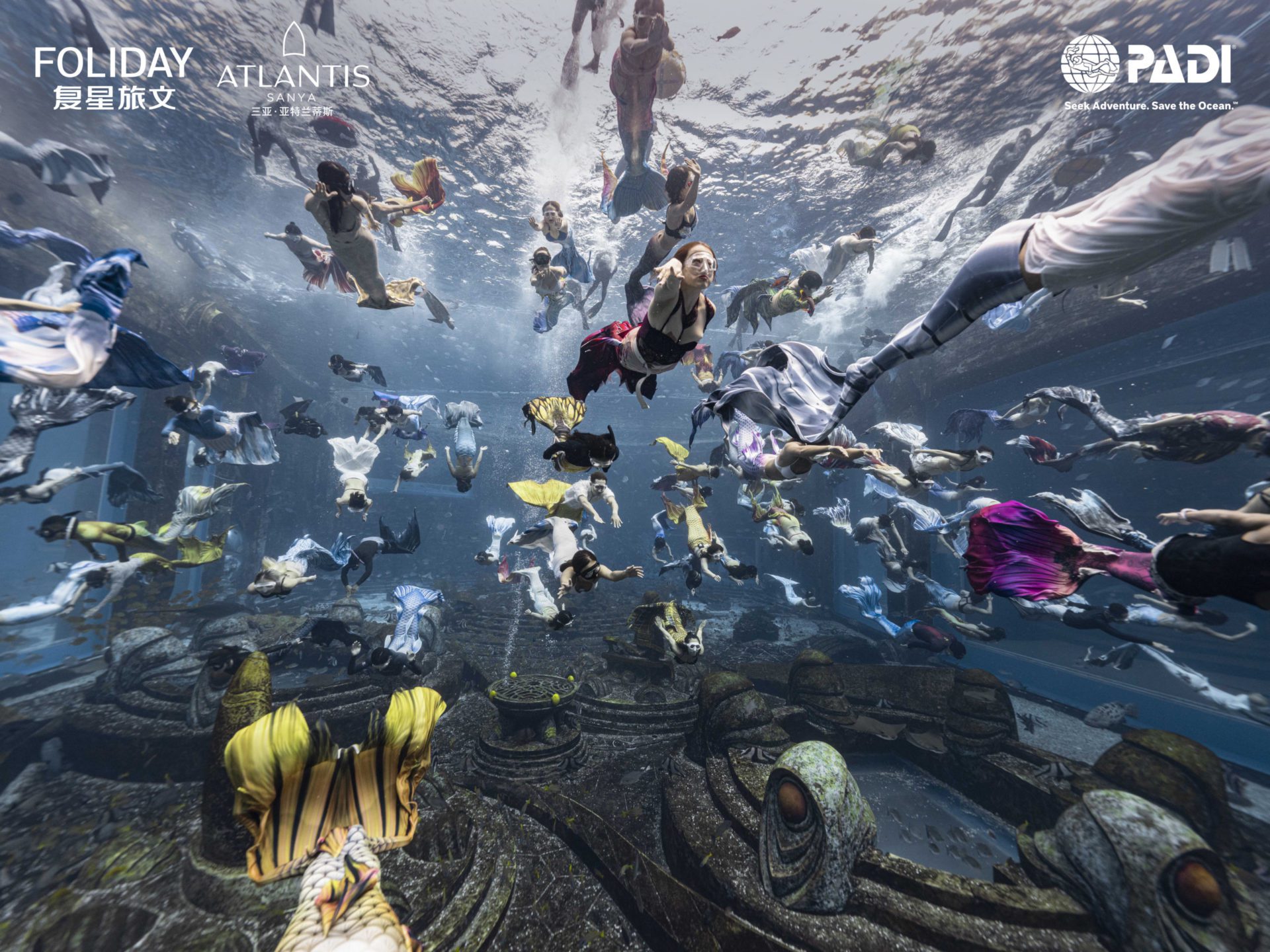 On 28 April, the Atlantis Sanya Resort in China completed the challenge of the Guinness World Records title of ‘The Largest Underwater Mermaid Show’.

Sanya Atlantis joined together with PADI, and with the combined efforts of 110 PADI Mermaid Divers and safety officers recruited from all over China, they completed the unprecedented challenge.

110 PADI Mermaid Divers were invited to gather, bringing an unparalleled beauty to the world. 90 percent of the mermaid performers were PADI Mermaid Instructors, and dozens of PADI professional safety officers escorted the underwater performers. Professional medical and rescue teams were also on standby.

The Sanya Atlantis and the PADI China teams completed the planning, execution and logistical support in the months leading up to the show. After intensive underwater training, joint rehearsals and exercises, and constant adjustments and corrections (from the director to the actors, security officers, camera team and logistics), everyone was ready. All involved displayed the most-professional ability and attitude.

The challenge was held in the most-distinctive area of ​​Atlantis in Sanya – Ambassador Lagoon. The transparent acrylic viewing curtain wall is 16.5 metres long, 8.3 metres high, and 0.65 metres thick. It contains 13,500 tons of sea water – and, on 28 April, 110 mermaids. Performers needed to enter the water at the same time and successfully complete the challenge of the Guinness World Records title of ‘The Largest Underwater Mermaid Show’.

On the morning of 28 April, all the participants had completed preparations. Ms Wu Xiaohong, the first Chinese certification officer of the Guinness World Records, read out the challenge rules, and under the witness of everyone, the challenge began at 9.30am. The changing formation, beautiful posture, and shocking performance created an atmosphere of amazement.

At the end of the performance, Xiaohong announced the challenge result: “Atlantis Sanya successfully challenged the title of ‘The Largest Underwater Mermaid Show' in the Guinness World Records!”

The PADI Mermaid programme, which was introduced in late-2020, is designed to provide water-enthusiasts an additional outlet for exploring their underwater passion. Today, there are more than 600 PADI Mermaid Instructors and 50+ PADI Mermaid Centres in China.

“Mermaid, in its root-grass form, has been around for very long, but it was not until recently (three to five years ago) that it started to become more systemized. It took off in China like wild fire,” says Yan Lou, president of PADI China. “Within four short months after the official release of the new PADI Mermaid programme in China, mermaid now accounts for 30 percent of local PADI certifications in China.”