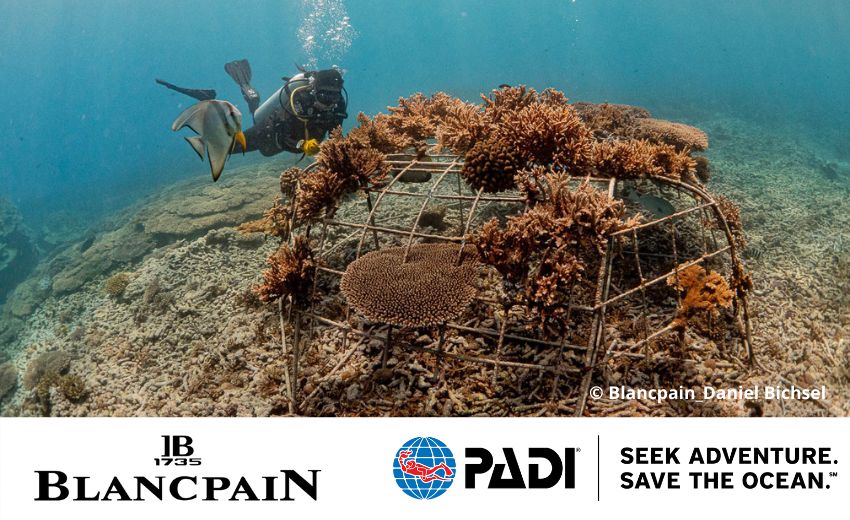 PADI and Swiss prestige watchmaker Blancpain are joining forces with the aim to fundamentally increase the number of marine protected areas (MPAs) around the globe over the coming decade.

The organisations unveiled their collaborative partnership at the 9th Annual World Ocean Summit – the flagship event of the Economist Impact’s World Ocean Initiative, attended by the world’s top thought leaders from business, science, governmental and non-profit sectors – to tackle the greatest issues facing our blue planet.

“Blancpain and PADI have rich histories rooted in exploration and ocean conservation, inspiring both organisations to become powerful catalysts of planetary change,” says Drew Richardson, President and Chief Executive Officer of PADI Worldwide. “Protecting our oceans is not only core to our ethos, but critical for our very survival. The world must pull together to stem the urgent crisis in our ocean and we have an immense opportunity to bring about change. We’re proud to work alongside such a prominent partner who shares our optimistic outlook on the future and a deep commitment to further empowering our global community to seek adventure and save the ocean.”

Together, PADI and Blancpain will work with local communities across the globe to expedite the establishment of MPAs. At the heart of the multi-year, multi-million-dollar initiative is the flagship citizen science programme, Adopt the Blue, in which 6,600 registered PADI dive centres and resorts will be activated to develop the largest network of marine protected areas on the planet, enabling millions of PADI recreational divers to proactively engage in marine conservation at every opportunity.

Another keystone of the partnership is the formation of the Blancpain/PADI Community Grant, which funds critical conservation efforts in local communities. These grants will drive both ocean preservation as well as indigenous community support, serving as a force for good for both humanity and ocean.

“With our almost 70-year legacy of the Fifty Fathoms diving watch, Blancpain has developed not only a passion, but a deep commitment to our oceans,” says Marc A. Hayek, President and CEO of Blancpain. “We’re extremely proud of the role we’ve played in advancing global marine protection efforts and we are thrilled to be collaborating with PADI – and its community of divers – to bring about even more positive change.”

The successful implementation of marine protected areas is critical to the health of the world’s largest and most important ecosystem and has been proven to restore biodiversity, build resilience to climate change and re-establish vulnerable species’ populations.

“It will take a unified, dedicated effort to improve the state of the oceans. Together, we are directing the power of our organisations towards one of the most important – and urgent missions on the planet,” states Richardson.