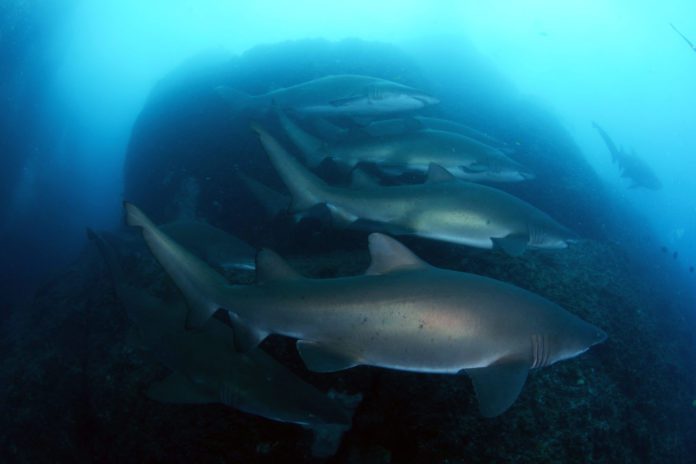 On the second part of my recent mini-Road trip, I dived at the Outstanding Wolf Rock. 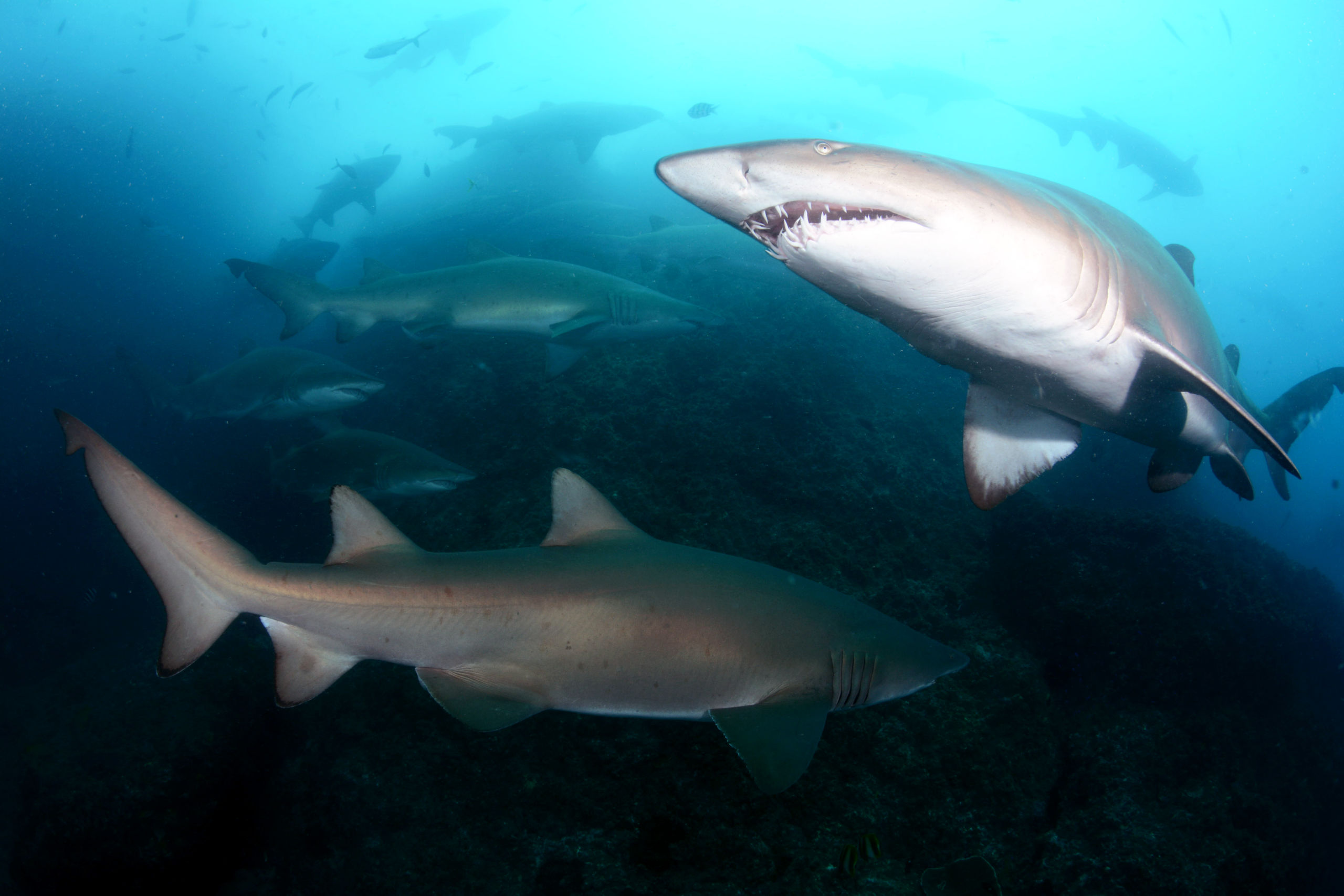 The small town of Rainbow Beach is sandwiched between a sprawling forest on one side and the Pacific Ocean's vast expanse on the other. Close to Harvey Bay, this picturesque part of the world has been attracting campers and 4×4 enthusiasts for a long time. It offers easy access to Fraser Island, and it is a quieter alternative to its more developed neighbour.

What was less well known, until recently, was that this beautiful little town boasts an absolute gem of a dive site. Wolf Rock is fast gaining a reputation as one of Australia's best shark dives, and with good reason. 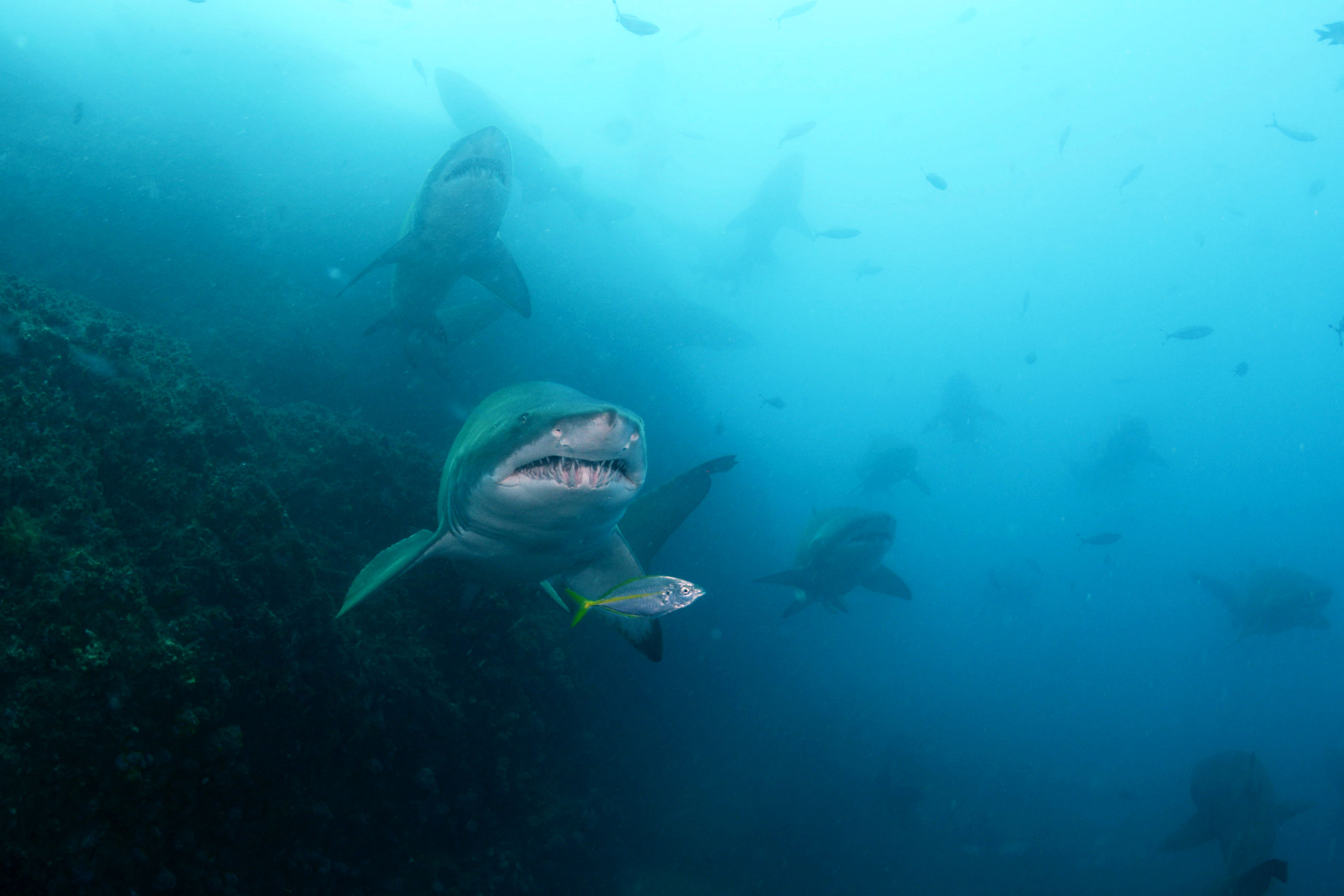 We had arrived in Rainbow beach the previous afternoon, and the first pleasant surprise we had was the lookout point, a place called the Carlo Sand Blow. I was expecting a viewing platform with a nice view over the ocean and surrounding landscape. I was not expecting a vast dune perched on the top of a hill with spectacular 360-degree views, at sunset 10s of thousands of bats ascended from the surrounding forest, filling the air with their high-pitched calls. There was quite a crown at this natural spectacle and most had had the foresight to bring coolers full of beer!

The next day we arrived at Wolf Rock Dive. After we had filled out the required forms, we made the short drive down to the jetty where we boarded the boat. This sturdy little vessel then cruised along a tranquil river to the mouth of the estuary. We then powered across calm seas to our destination. From the surface Wolf Rock looks uninspiring, below the lapping waves it is a different matter entirely. 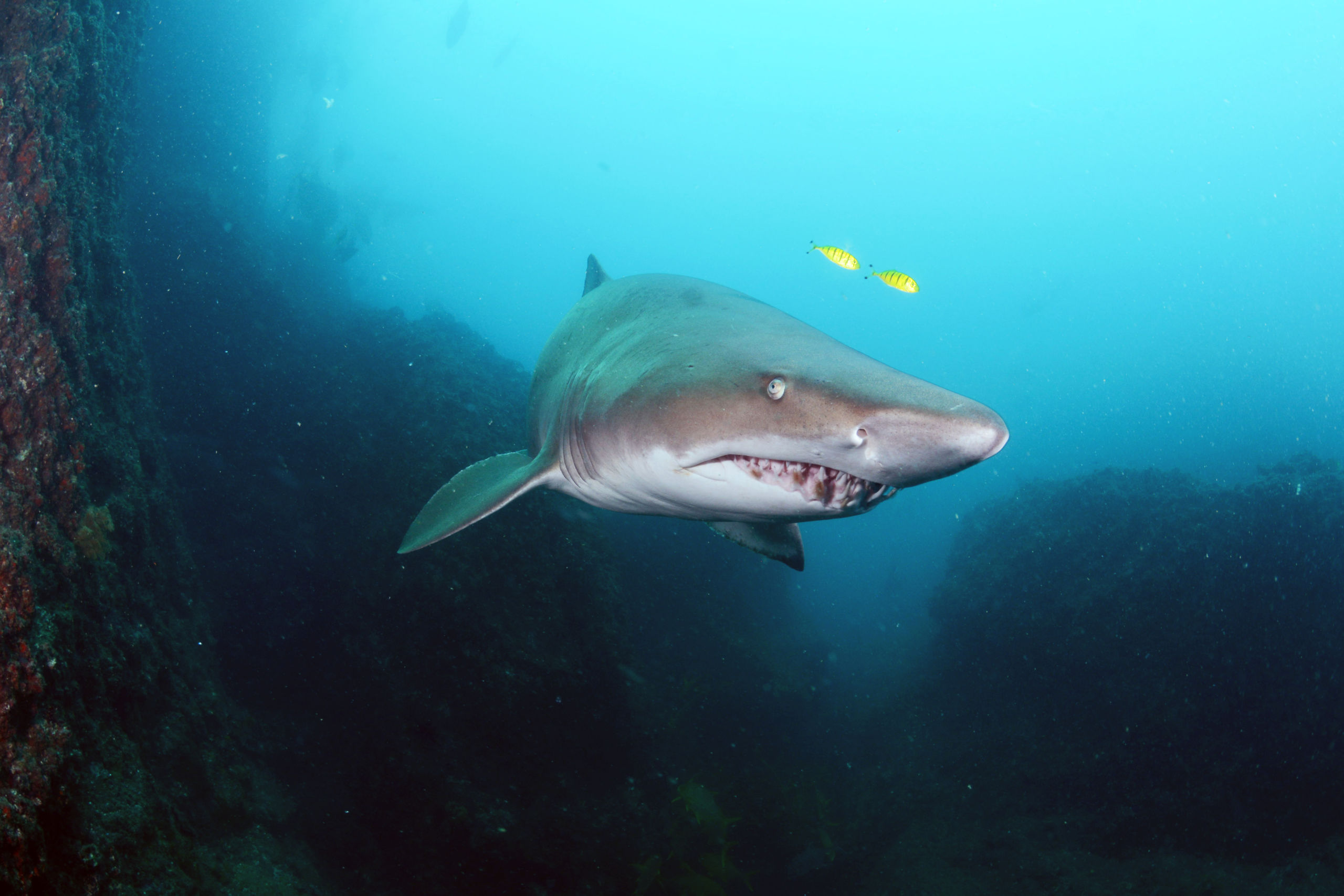 On the first dive we explored the gutters that crisscross the twin pinnacles of Wolf Rock. Each gutter we swam into seeming to have more Grey Nurse Sharks packed into it than the last. As we spiralled around the dive site gradually making our way to the surface, we encounter yet more Grey Nurse shark lazily circling this rocky pinnacle.

The sheer number of sharks on this dive was staggering, and as the visibility was probably only about 10 meters, it is safe to assume there were plenty more lurking just out of sight. At the summit of the pinnacle, we spent the safety stop among large schools of trevallies and jacks, a great end to a great dive. 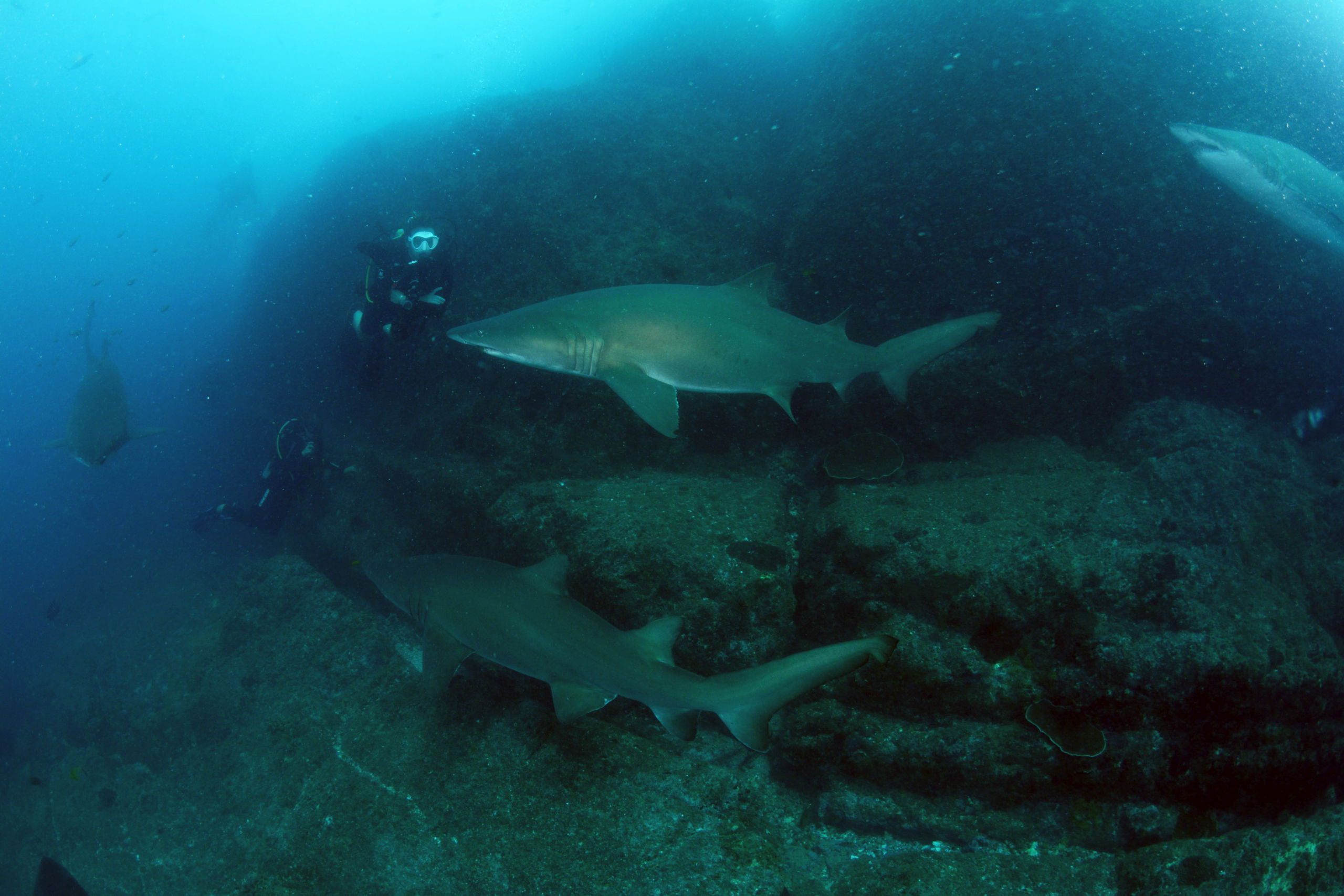 For the second dive, our guide wisely suggested that we spend most of our time circling the upper reaches of the pinnacles, as this seemed to be where the majority of the sharks were congregating. It proved to be a wise choice. Grey nurse sharks engulfed the dive site. Stacks of sharks piled on top of each other as they swam casually around the rock, in a shark spectacular that I have rarely seen the likes of.

We also saw some wobbegong sharks and a couple of turtles plus a variety of reef and pelagic fish, but the undoubted stars of the show were the grey nurse sharks, and they were prolific. Wolf Rock offers pretty much guaranteed shark encounters with its resident Grey nurse sharks and depending on the season much, much more. This dive should definitely be on the must do list of every shark enthusiast. 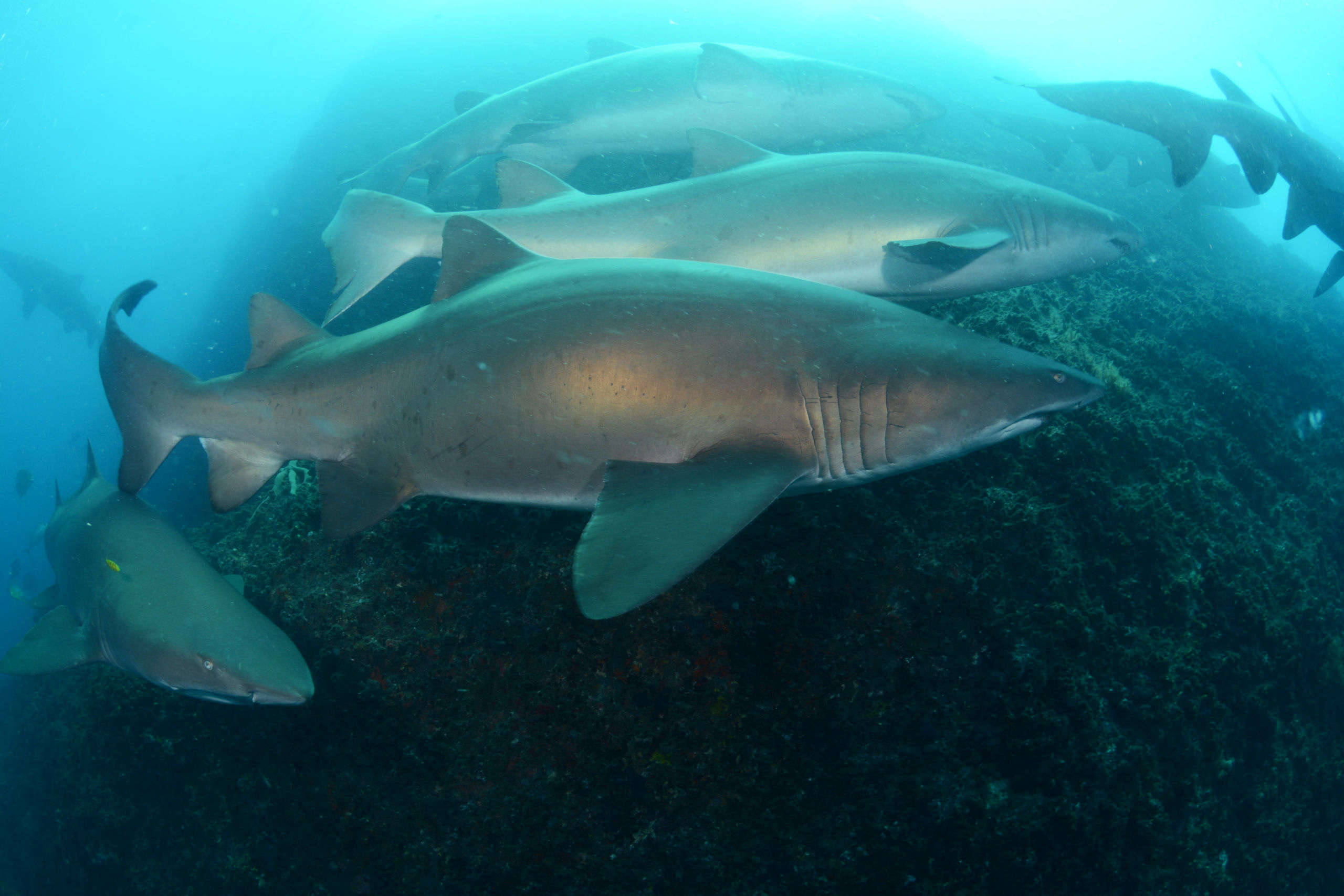 Getting to Wolf Rock

Wolf Rock is located just of the sandy shores of Rainbow beach, about 3 Hour drive from Brisbane Airport on the Gympie turn off. 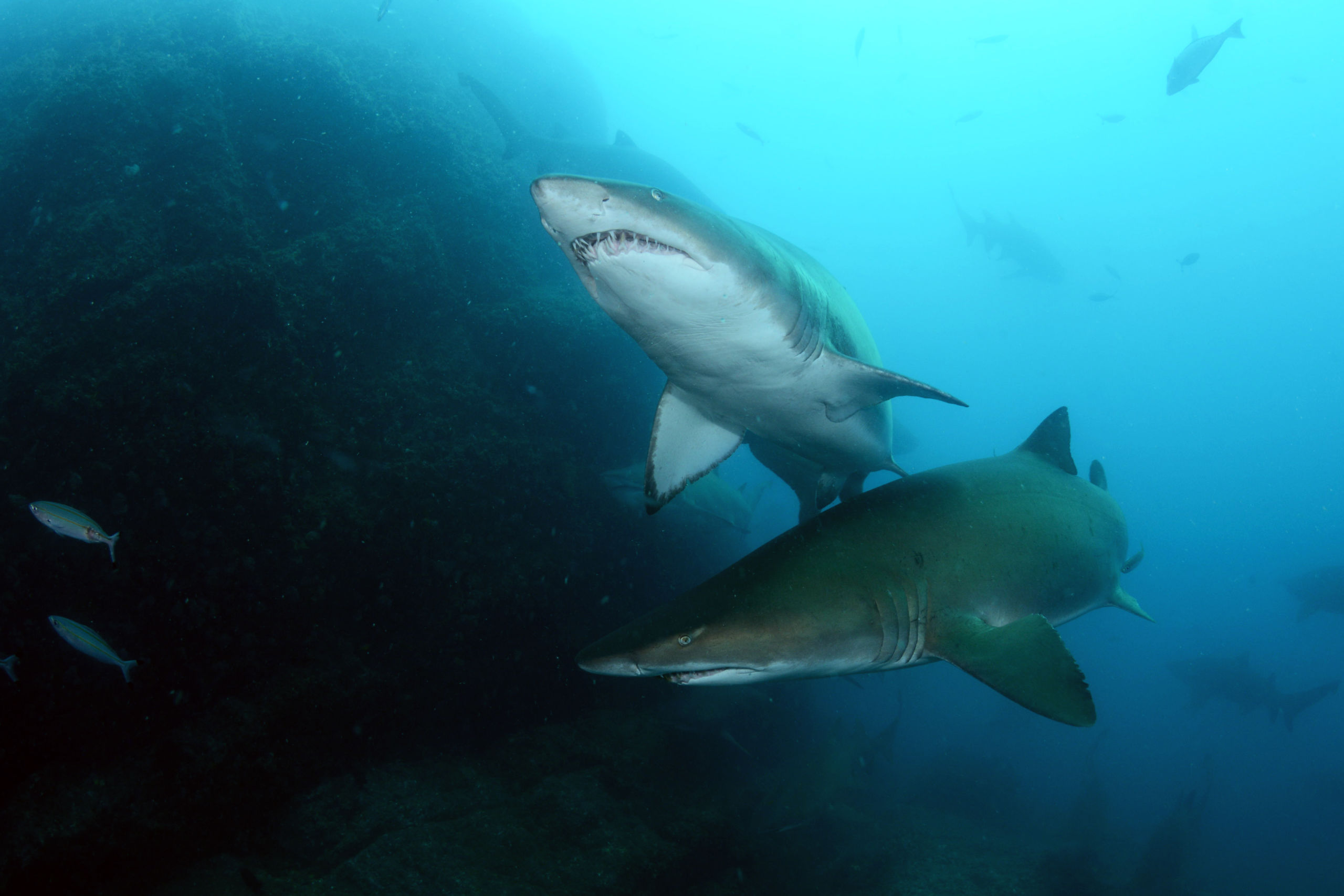 Wolf Rock Dive is located at Rainbow beach and has recently been taken over by Alex, James and Fiona, who are keen to get the word out there about this fantastic destination. They take small groups out to see the sharks and stagger the entry's to ensure that each group gets to interact with these amazing creatures. The staff is knowledgeable, passionate and professional. 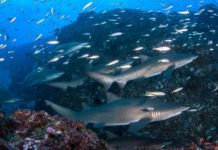