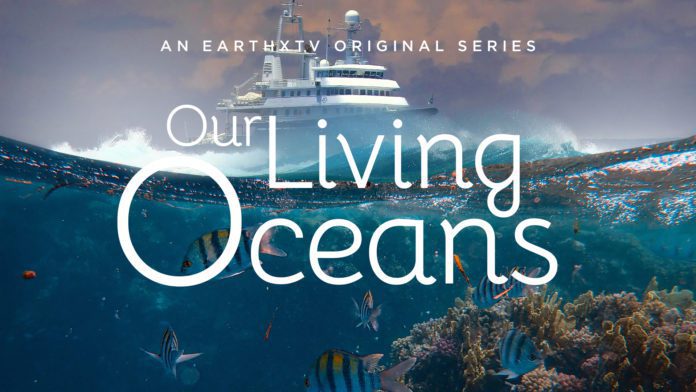 EarthxTV presents a new original series – Our Living Oceans – that begins airing today (6 September 2021) that reveals the hidden life within our oceans.

In partnership with the Khaled bin Sultan Oceans Foundation (KSLOF), Our Living Oceans engages scientists, conservationists and local leaders from around the world who are working to preserve, protect and restore ocean health.

Deep-sea submersible pilot and 2013 National Geographic Young Explorer Erika Bergman hosts Our Living Oceans. In the premiere episode, Bergman leads viewers to the beginnings of the ten-year Global Reef Expedition that assessed the health and resiliency of one-fifth of the world’s coral reefs.

Our Living Oceans tells the story of how the ocean has been affected by climate change and the rapid increase of the world’s population over the last 50 years. With amazing ocean footage, the series uncovers what we can do to correct our current course. Dr Earle explains the crisis state that exists with the coral reefs – ‘Since the 1970’s, half of the coral reefs on earth have been lost or are in serious decline'. The health of the coral reefs directly affects humanity as it provides food, income, and protection from storms.

The second episode of the series airs on 20 September.  Reefs and Mapping takes a closer look into coral reef research. Bergman speaks with the scientists that created the largest collection of high-resolution coral reef maps, asking the question ‘Can these maps help identify which reefs have a chance of surviving?'

Our Living Oceans will follow the Khaled bin Sultan Living Oceans Foundation and their partners on the Global Reef Expedition, in addition to others on the cutting edge of ocean research and advocacy.

Princess Hala, a director on the board of the KSLOF since 2016, and others – marine scientists, educators and communicators – from the Foundation will share their expertise and experience during the course of the series. Among the contributors is the Foundation’s Director of Science Management, Alex Dempsey, who has been lead benthic scientist in all of the Global Reef Expedition missions.

Alongside experts from the KSLOF, Our Living Oceans will feature Dr Ved Chirayath, whose work at the NASA Ames Research Centre has helped advance remote sensing and mapping of coral reefs; Sylvia Earle, who was the first female chief scientist of the National Oceanic and Atmospheric Administration; Angelo Villagomez, an Indigenous Chamorro from the Mariana Islands whose work with the Blue Nature Alliance showcases community support for large marine protected areas; and Ben Halpern, whose research lies at the interface of marine ecology and conservation planning.

Tune into Our Living Oceans at EarthxTV on Mondays 8/7c or catch the show on the EarthxTV app, Roku, Apple TV, Google TV or Amazon Fire TV.