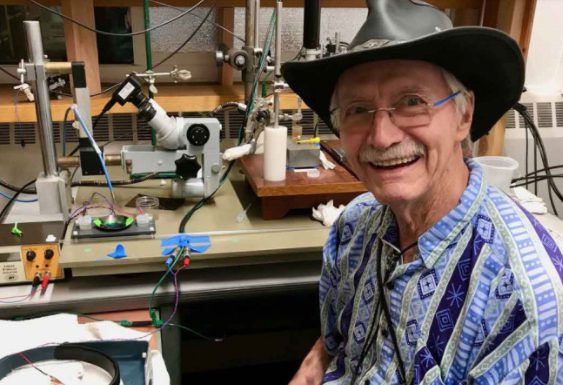 Adrianus Kalmijn, a biologist and physicist at Scripps Institution of Oceanography at UC San Diego, who pioneered the study of electromagnetics in shark sensory functions, died 7 December at the age of 88.

Family members remember Kalmijn as a renaissance man and a maverick. His work was his passion. He set a very high standard of integrity in his work and sought truth, accuracy, and scientific insight, said his wife Vera Kalmijn.

Born 7 November 1933 in Utrecht, the Netherlands, Kalmijn received his PhD in biology and physics at the University of Utrecht. In the early 1970s, he discovered the true purpose of pores located in the snout of elasmobranch fishes, such as sharks and rays, known as the ampullae of Lorenzini. He showed that the ampullae in sharks and rays gave them the ability to detect prey by sensing the prey’s electric fields. He published a theory on electric and magnetic orientation in sharks and demonstrated through his research that sharks can indeed orient using the electric and magnetic fields in the ocean. Through carefully constructed behavioral experiments both in the lab and in natural settings around the world, he demonstrated how elasmobranchs utilize this sensory system for capturing food and navigation. His goal was to learn what the animals could teach us. These discoveries are now textbook knowledge and have been applied in solving previously intractable problems, said family members and colleagues.

Kyle Newton, who studies sensory physiology and behavior of sharks and rays at Washington University in St Louis, described Kalmijn’s work as foundational to his field.

“His contribution to shark sensory biology is not just significant, it is monumental,” Newton said. “He basically discovered that the ampullae of Lorenzini are the organ responsible for electroreception and he noted that this is a major tool for hunting prey that hide buried in the sediment.”

As a researcher at Woods Hole Oceanographic Institution in Woods Hole, Mass., Kalmijn built the first electromagnetic research facility. He joined Scripps Oceanography in 1981 and during the 1980s, he expanded the design and built a larger, world-renowned electromagnetic research facility for his studies with funding from the Keck Foundation and the Office of Naval Research. The distinctive spherical facility located near Birch Aquarium at Scripps features magnetic coils in its walls that enable researchers to control the ambient magnetic field within the building. The facility was central to and enabled his research for decades.

Throughout his career, Kalmijn also worked on hearing in fish, the lateral line in fishes, and magnetic bacteria.

Kalmijn’s last two manuscripts summarizing his work will be sent out for publication with the support of one of his colleagues.

Kalmijn’s distinctive contribution came from integrating the physics of James Maxwell, Michael Faraday, and Albert Einstein with his understanding and passion for the biology of oceanography, family members said. In his research and his life, Kalmijn adhered to Faraday’s principle, working ‘in the high philosophical desire to remove error and discover truth', said Vera Kalmijn.