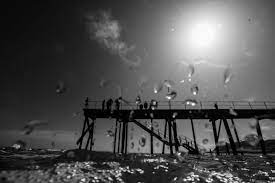 The Australian Government has reviewed its advisory for travellers...
Contents hide
1 NIGHT DIVER RESCUED AT PORT NOARLUNGA, SA
1.1 So what can we learn from Oksana’s situation?

Oksana knew when she stepped out of her car on Monday evening that something didn’t feel right. It had been a long day already, and a long drive to Port Noarlunga for her very first night dive. The sun was setting and the surface conditions looked dark and choppy – not unusual for the Noarlunga reef but not what she was used to.

But in spite of feeling uneasy, she met her PADI advanced course mates, geared up, jumped into the ocean from the jetty platform and started her descent.

Some three hours later, SA Sea Rescue Squadron picked her up drifting in the ocean near O’Sullivan’s Beach, over 2km north of the Noarlunga reef and 1km offshore.

This story is about an experienced diver who ran into trouble on what should have been a straightforward training dive. There are lessons here that Oksana believes are important to share.

Oksana is a nurse well trained in trauma care who has lived and worked internationally for most of her career. While based in Libya 20 years ago, she learned to dive with BSAC, logging over 100 dives in the Mediterranean. After moving to the UK, she continued to do a little dive travel but eventually let her diving lapse. And then she came to South Australia, where she decided to start diving again.

She took a refresher course, insisting on both a comprehensive pool session and an ocean dive. After logging another 20 dives, she invested in her own gear and signed up to do an advanced course so that she could experience some of the deeper dives that South Australia has to offer.

However, despite her experience, she had never done a night dive.

That particular evening, the swell was over one metre combined with 24 km/h winds. Divers who frequent Noarlunga are familiar with the “washing machine” effect that these conditions can create at and below the surface near the reef.  But Oksana wasn’t used to such conditions, and was uncomfortable with jumping into choppy waters off a jetty platform. All her previous experience in the Mediterranean had been shore diving – easy swims out to drop offs, returning the same way. To add to her anxiousness, she had not settled on the weight that she would need with her new gear.

She started her descent and found she was struggling to stay down. She surfaced and tried several more times to rejoin her buddies, able to follow their lights but unable to get to, or stay back down with them. She finally decided she would have to abort the dive. But by then, the swell and current had taken her some distance along the reef away from the jetty stairs.

She considered swimming back to the jetty but as a shore diver, she thought she might have better luck going in to shore. But the swell and wind were increasing, and the currents were taking her further away. Eventually she realised she would simply have to drift with the ocean, waving her torch in the hopes that she would be seen and rescued.

Back at the reef, her buddies went into their own rescue mode for a missing diver: they checked around the bottom – no luck; surfaced and looked for her — no luck; swam back to the jetty, climbed the stairs and only then were they able to spot her light in the distance. SA emergency and SA Sea Rescue were called immediately, executing a successful boat rescue, but only after searching for Oksana on the surface for quite some time.

Oksana’s experience was a classic case of task overload — dealing with a general feeling of unease at the start, training for a new skill, challenging surface conditions and a new gear setup. Any one of these factors could have been managed, but all four at the same time led her into a crisis situation. Matters were complicated by the fact that she had left her SMB (surface marker buoy) in her car, making it harder to spot her at the surface. She also had no backup torch, but fortunately the batteries lasted just long enough in the one she was carrying.

So what can we learn from Oksana’s situation?

She strongly advises that everyone should pay attention to how one is feeling at the start of any dive. If you aren’t up for it, there is no harm in telling your buddies that it’s a no go for you. You should become very comfortable with any changes in your gear before taking on a new experience, whether it’s a new course or a more challenging dive. Even a simple switch to a thicker wetsuit can affect your diving performance underwater. And make sure you have your emergency tools with you at all times.

Oksana didn’t have her SMB but she did have her snorkel, which probably saved her from taking in too much seawater at the surface when her air ran out. On night dives, be sure to carry a backup torch just in case. Finally, discuss an exit strategy with your buddies – if you have to abort a dive, make sure you all know the best places to return to on the surface, whether it is the boat, the jetty or shore.

It is believed that at least ten divers have died on the reef at Port Noarlunga since the first recorded diving fatality in 1951. This latest incident is a sober reminder that although the site is popular, easily accessed and relatively shallow, divers should not underestimate the risks involved with different levels of experience, weather and water conditions, and should be adequately prepared for emergencies.

After a couple of nights in hospital to make sure her lungs were clear of the effects of the salt water, Oksana has recovered. She is determined to go diving again – although it may be a while before she tries another night dive.