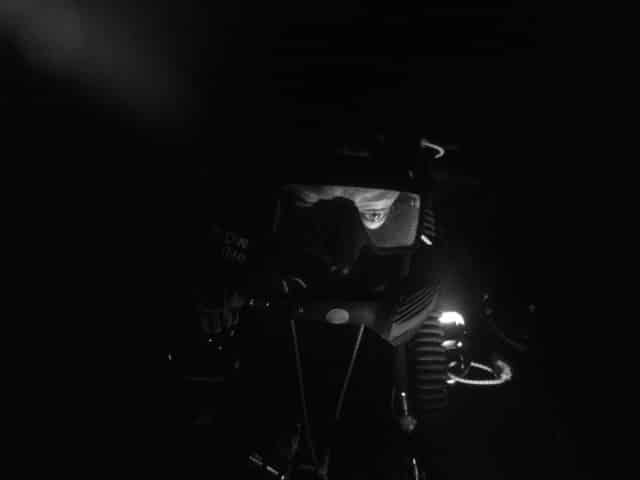 Fear manifests itself in a number of ways. In diving, being where nature never intended, deep underwater, it can take on life of its own. We, as humans, as land animals, are governed by a heightened sense of flight or fight. With eyes on the front of our heads (convenient for scuba masks!), we fall primarily into the class of predator. With very little in the way of animal strength, and relatively slow speed, we also sit firmly in the camp of the prey.

Our weapon is strength of mind. Intellect. An ability to make things. As we have seen, time and time again, mixed with our overwhelmingly human ego, this can be a frightening combination.

When JS Haldane said that coming up too quickly can have severe effects on our health, that we have to abide by the rules of nature that we as divers call decompression tables, he didn't – as might be expected – put us off deep diving. Quite the opposite, we went deeper, thinking that we were the masters of the deep, that we, as humans, were in control.

When Jacques Cousteau helped develop the aqua lung, for us mere mortals, he opened up the door to the undersea world. The man on the Clapham omnibus had access to the seas.

Being a diving instructor is undoubtedly one of the most-exciting things a diver can do. From ‘try dives' to deep technical diving, the responsibility for and ability to shape the experiences of others in the watery world is an utter privilege.

What is does most certainly is multiply the opportunities of seeing how diving affects the diver. Your own experiences may be manifold, but instructing gives a breadth of experience of the human underwater that can only come through taking different divers, new and experienced, into different situations.

Of those situations that will test even the hardiest of divers, whether an instructor or not, is the deep dive.

On the surface, kitting up – preparing wrist-mounted computers, analysing gases, in other words, just planning the dive – can give a diver the butterflies. To know that in a few days time, you'll be gone from your usual world of work and family to, what is often (in the UK at least), the dark and cold of the deep, the claustrophobia of torch beams, the fumbling to feel the world through thick neoprene gloves, is enough to give anyone the jitters.

By the time the kit is on, the rubbery taste of the regulator produces that initial nausea, the cold is biting and the hands shake slightly rubbing spit into the mask and pulling it over the head, it can take everything that a deep technical diver can muster just to go ahead with the dive.

For those of us familiar with the route down the A55 into North Wales, a ten-minute surface swim against the wind, can follow. At the buoys, the decent line drops away into the darkness. What faces the diver takes on an arrogant feel. As if saying, well, come on then. If you dare. The thoughts, the spirits, the monsters that live down there are waiting.

Now is the time. Diver vs nature. Diver vs 300,000 years of evolution telling us not to go down there.

Most divers are familiar with some of the apprehension that goes with diving. It's natural. It's probably a good thing, to some extent. Complacency is never good. Believing that nothing can go wrong is childish. Believing that you are the best diver, the one it will never happen to, is downright madness.

It has to be remembered that oxygen is also narcotic when breathed under pressure. To that end, a diver breathing air is breathing a mixture of circa 100 percent narcosis producing gases.

Over the years, I have noticed that a number of divers get out of the water complaining that they were narked. That being narked made them come shallower, or even abandon the dive. I have seen divers who have abandoned their buddies, and got out of the water, complain of this scientific condition.

I have been narked. I have dived in the soup. I have felt the slowing and the speeding; the fixation; the shellshock that manifests itself in what we older tech divers used to call ‘deep air' diving. I could have sworn that I was breathing dentists' anaesthetising gas, a taste from childhood. There is no doubt that narking is real.

But I have also been frightened to death. Scared beyond anything I'd known before. Where actually, I thought that death would be the result. On one occasion, I was so scared that I still can't believe I escaped drowning. And that was not on a deep dive. That was not on a mixed gas dive, jumping between numerous cylinders. That day, I was in no more than 15m of water. That was my first experience of a freeflow.

When I got out of the water (sharpish), and convinced myself that I was still alive, I settled into the mental processing of the incident, feeling a little red-faced that I didn't just tough it out like the more-experienced divers said they did. They never got scared. They said so. They only got narked. And that's when the penny dropped.

Some years ago, I developed what I hoped was a ‘real person' approach to teaching students about narcosis.

It was based on coupling the usual story of narcosis being a discreet physiological effect with the truism that some of the feelings at depth are ordinary human conditions such as good old apprehension and fear.

The clever diver would know this and behave accordingly rather than simply blaming his wishing to be shallow or to get out, on being narked – as if this is an acceptable reason, being beyond his or her control, for what may be reckless or even dangerous diving.

This approach brought out a healthy admission of human frailty instead of hiding it behind a convenient scientific excuse, which I think some divers even began to believe. To admit that a diver is scared is seen by some to be an admission of inability, of unsuitability to diving, and especially instructing – how can a diver that gets scared look after others?

When those in deep diver training get out of the water, smiling and chatting with the instructor and divemaster, it's easy to see that not only have the divers had a positive experience but they have been led by divers that know themselves.

I have seen divers exit the water in silence. Drop their fins, drop their BCD. Annoyed. And often having been scared. And that includes the instructor and Divemaster.

It may, of course, mean that the instructor or Divemaster was actually narked, but it is all too often an excuse for fear. Fear is as dangerous as any other negative emotion. Being scared underwater can lead to death. To persist in the mistaken belief that you were (or to lie about being) narked is about as dangerous as it gets.

I rolled out this approach to accepting fear against narcosis over a couple of years, in deep specialties, Divemaster training and tech. While I couldn't measure the results scientifically, I could see a distinct change in attitude which did lead to changes in diving practice.

What was fantastic is that people didn't shy away from deeper dives, but wanted and got more training. They accepted that it was not weak to creep deeper bit by bit. All of those divers are here today.

Andrew Tonge is a lawyer and director at Nexus Solicitors Limited, Manchester, where he advises a number of businesses in the diving and subsea industry. He is also a PADI technical diving instructor and experienced diver. All views shared within this article are his own.