The Scuba Diver team rounded out their time on Carriacou with two dives with Deefer Diving. First up was a trip down to the south of the island to do a swift drift called Layer Cake. 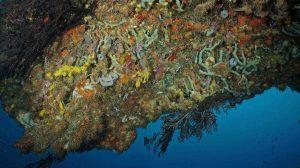 We cruised over rolling coral formations before dropping over the edge of a seriously undercut ledge, which we were then able to follow, dipping in and out of ledges and nooks and crannies to escape from the relentless, but manageable, current. Lots of lobster, nurse sharks, shoaling fish and soft corals and sponges aplenty. A cool, wicked ride, that advanced divers happy in a strong current will relish. 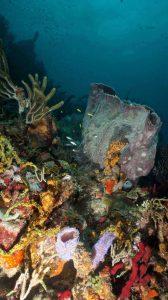 To follow this tasty offering, we returned to The Sisters dive site and did the other side. Again, large boulders smothered in encrusting growth were surrounded by trees of soft corals, while overhead waves created a storm of surge. However, at one point it became a night dive and extremely atmospheric as a massive bed of sargassum weed drifted overhead, blocking out the sunlight apart from the odd beam poking through. It is easy to see why The Sisters are such a popular site on Carriacou – if you are on-island, you need to visit!