MARK EVANS: Grenada’s ‘Titanic of the Caribbean’, the Bianca C

The Scuba Diver team was back on Grenada, and the first dive on the menu with ScubaTech was the one that a certain Editor-in-Chief – that'd be me! – was most looking forward to. A visit to the so-called ‘Titanic of the Caribbean', the 600 foot long Italian liner Bianca C.

Luxury liner Bianca C went down in 1961, and to say that the last 56 years haven't been kind to her would be an understatement. I last dived her in 2007, and I noticed a massive difference this time around. One side has completely collapsed, leaving a jumble of superstructure, but the bow is still in one piece, and there is much to see as you drift along her entire, epic length. 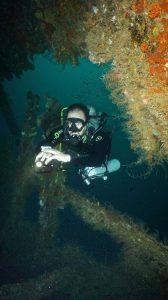 She may be a shadow of her former self for us old-timers who have dived her many times over the years, but she is still an awesome dive, and will blow away any Bianca C virgins as the sheer scale of the vessel is something to behold. There are plenty of recognisable features to make out as you swim along, and the final view back towards that immense bow as you drift off to begin your ascent is really something else. 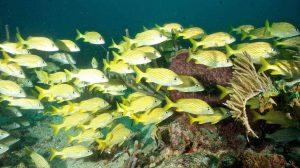 Our follow up was a nice, shallow drift along Shark Reef, which did actually turn up a small nurse shark, but was also home to dozens of monster coral crabs and spiny lobster, and some huge shoals of yellow snapper and grunts.