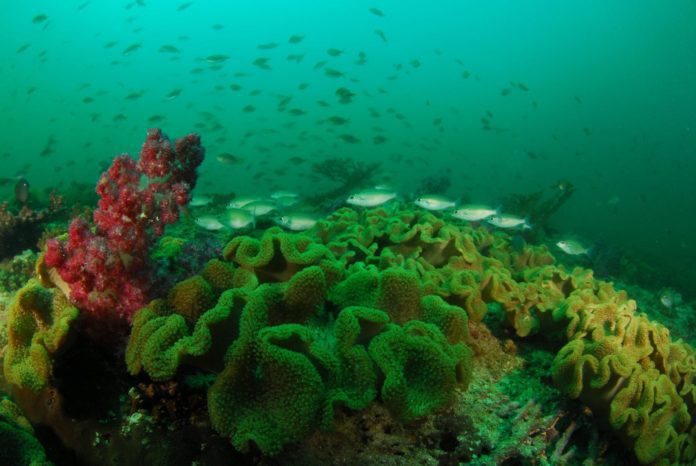 Oman offers some excellent Scuba Diving from its capital, Muscat

After 6 months of diving in Thailand it was time return to England. However, after observing the arctic weather conditions from a safe distance it seemed wise to delay my return home for as long as possible. My flight was due to have a 2-hour stopover in Muscat which I promptly extended to a week.  I knew very little about Oman, the city of Muscat or the quality of the diving and was eager to discover what was on offer.

The Sultanate of Oman is situated along the southeast coast of the Arabian Peninsula and it counts Saudi Arabia, Yemen and The United Arab Emirates as it neighbours.  The official language is Arabic but everyone also seems to speak English. The coastline is formed by the Arabian Sea in the south and the Gulf of Oman further to the north. The enclave of Musandam also has coastal water on the Strait of Hormuz. 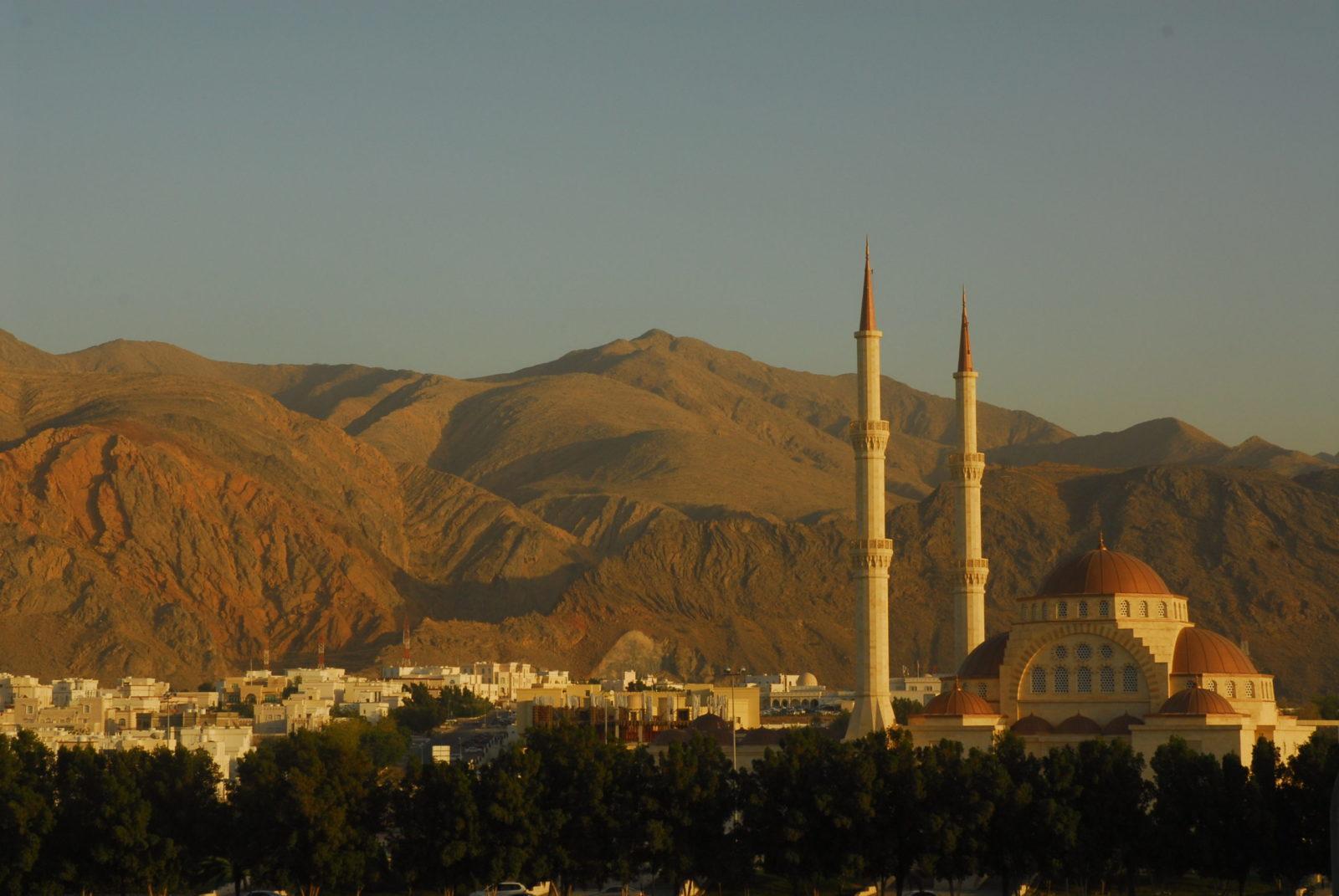 Muscat is a beautiful sprawling city sandwiched between the sea on one side and barren rugged mountains on the other.  There are no high rise building tainting the skyline instead traditional-looking flat-roofed white buildings stretch as far as the eye can see occasionally punctuated by the minarets and domes of the many mosques in the city.

Old fortifications which perch on top of mountain ridges that stretch down to the sea watch over the older parts of the city that were built in the valleys. The city is very clean and the people very friendly but there is not much evidence of public transport, the best way to get around is either to rent a car or take one of the many taxis that tend to be quite cheap. 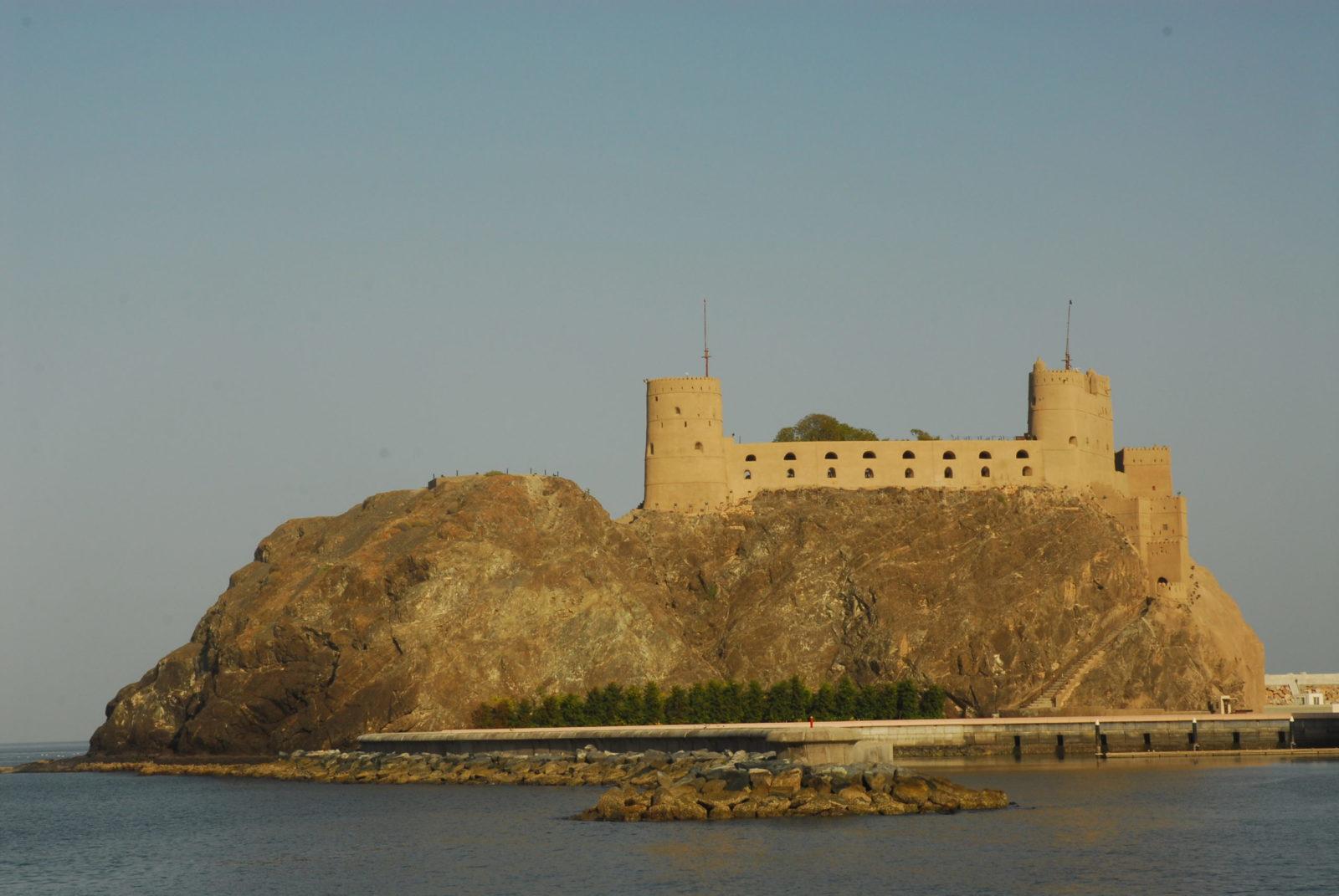 Above the water there is plenty to do: there are several souks and museums to visit or just wandering around the old town looking at the architecture and exploring the city is a pleasant way to spend time when not diving. The above water highlight, for me though, was Wadi Shab. It is about a 2-hour drive out of Muscat. Upon arrival, a small boat takes you across a river.

After a short walk along the palm treed banks the wadi opens out into a large canyon, imposing cliffs dominate the vista and after snaking along the canyon wall and picking a path through a large boulder field we arrived at a series of refreshing pools, some we could wade through and some we had to swim through. 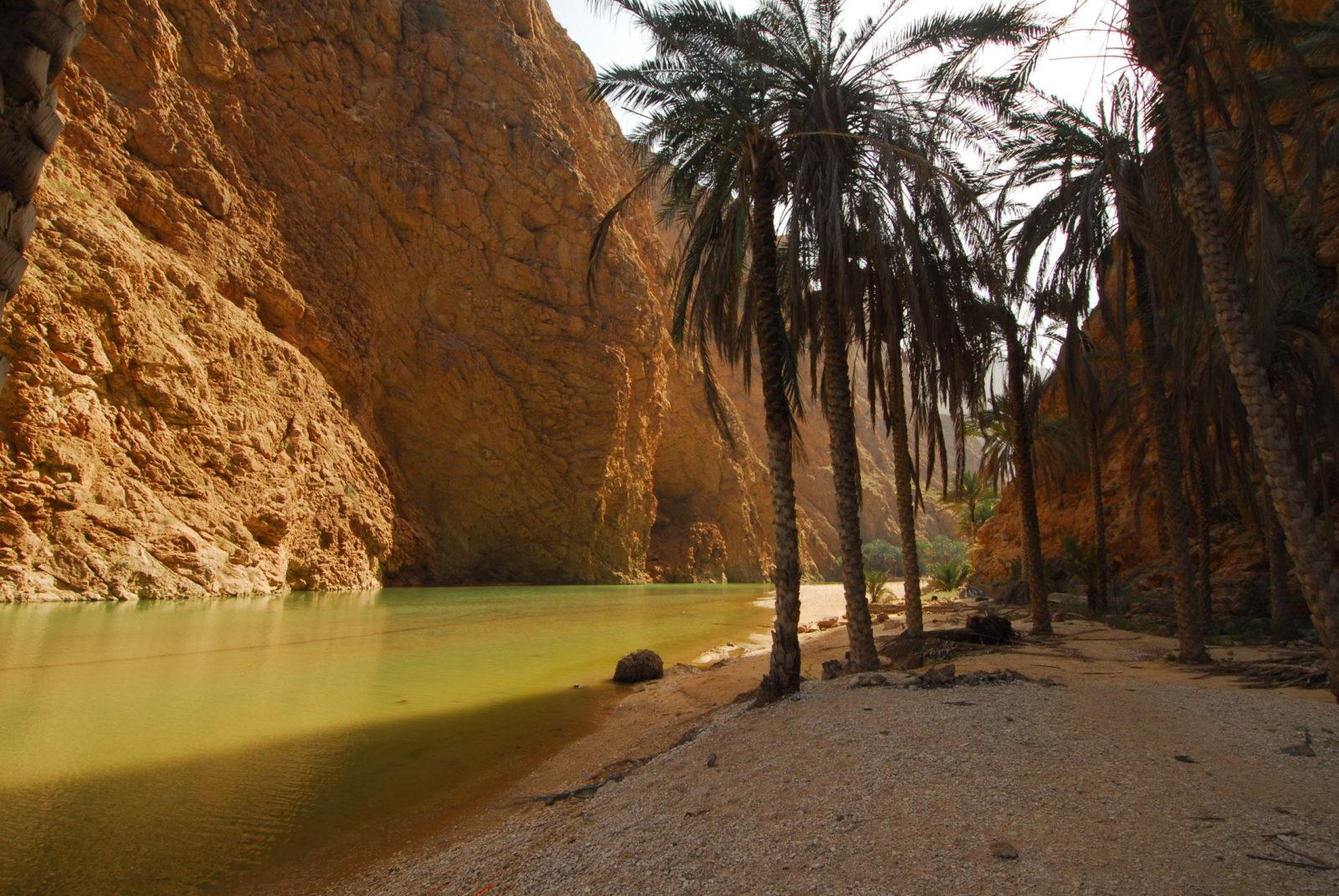 At the end we came to a large pool that ends at a sheer rock face.  A small crack in the wall gives the adventurous the opportunity to swim into a completely enclosed waterfall. It is possible to climb up the waterfall which opens out into a secluded rocky plateau complete with another small waterfall and a clear cool pool, a truly magical experience.

Euro-Divers, the dive centre I was diving with was located in a pleasant little marina just on the outskirts of Muscat.  For those of us who enjoy an après dive beer, there is no need to worry because the Sultanate of Oman is not completely dry, the marina restaurant next to the dive centre offers alcoholic refreshments as do most hotel bars.  My hotel, The Golden Oasis, was only a ten-minute drive from the marina. It is worth noting that Muscat is a large city, so if you wish to avoid an hour-long commute through rush hour traffic it is advisable to book somewhere close to your dive centre. 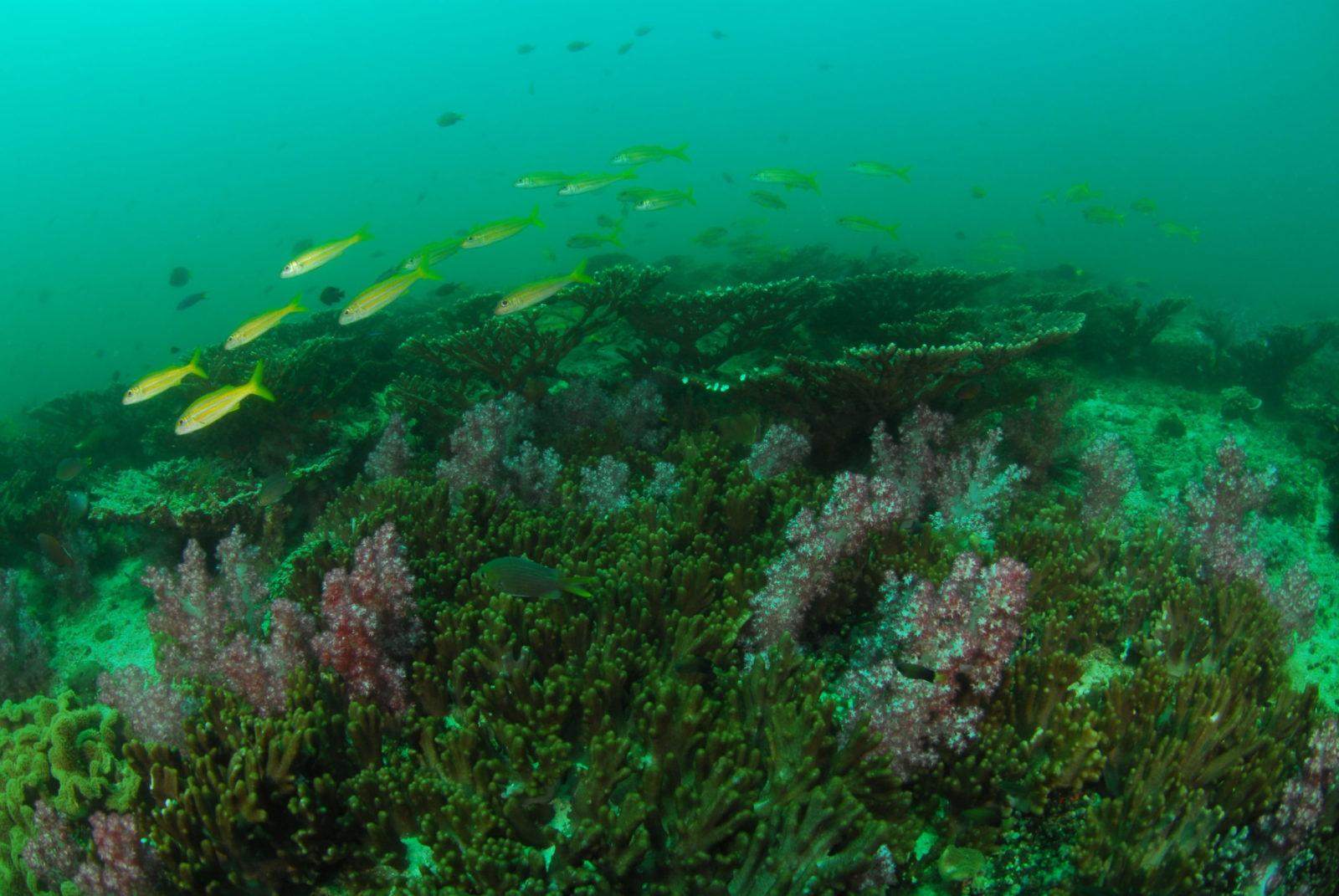 The best season for diving is May to June; visibility gets better up to 25 meters and the marine life is more prolific. July to September also benefits from good visibility but above the water becomes very hot and humid. October to April is a little more hit and miss with visibility down to 5 meters on occasion but averaging around 10-15 meters. Water temperatures range from 29C in the summer down to 22c in the winter.  I arrived towards the end of March and booked a 5-day diving package with Euro Divers and had a mixed bag regarding visibility.

Muscat offers a good variety of dive sites from the impressive limestone edifice of Fahal Island to the undersea mounts and walls of the Daymaniyats and for the wreck lovers there is the majestic wreck of the Al Munassir. More to come on these last two dive sites in a future issue but for now just let me say that that the Daymaniyats and the Al Munassir are well worth a visit. In fact if you are diving in Oman they are a must. 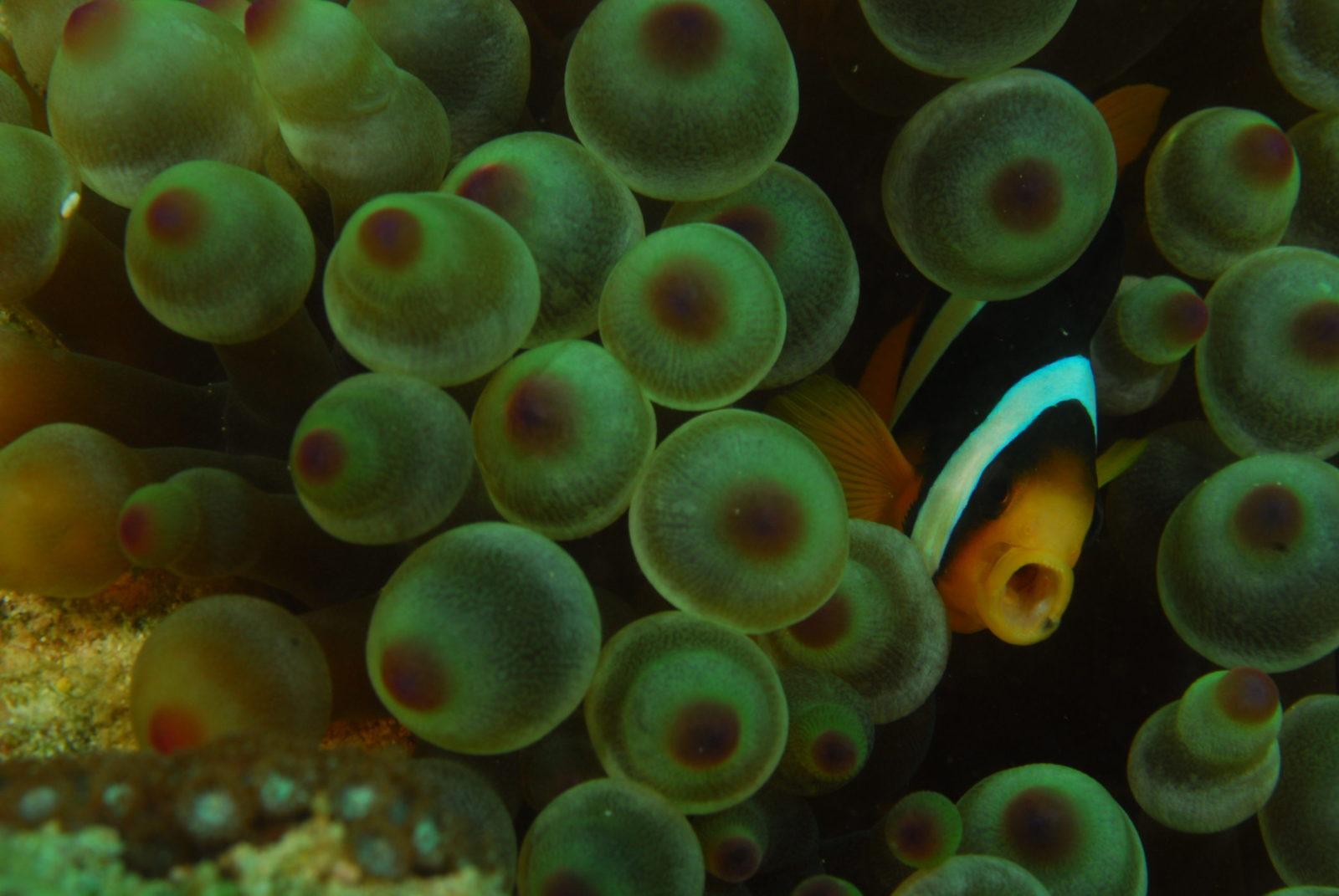 Whale Sharks are supposedly occasional visitors to the area but I am sure these mythical creatures are extinct. Although I am not basing this assumption on any hard facts I have only ever seen one in my entire diving career.  I am now beginning to believe that on that occasion I was suffering from the effect of nitrogen narcosis, even if I was only at 8 meters.

The majority of the diving takes place around Fahal Island or Bandar Khayran.  The first dives I did were around Bandar Khayran a small but comfortable boat whizzed us along the spectacular, barren coastline comprising of seemingly endless weathered limestone cliffs.   After 30 minutes we reached our destination. The first site was called Cave Site. This is usually a drift dive, however, due to somewhat choppy seas and with safety in mind, we dropped into the water in a more sheltered cove where the boat could moor to make entries and exits a little simpler. 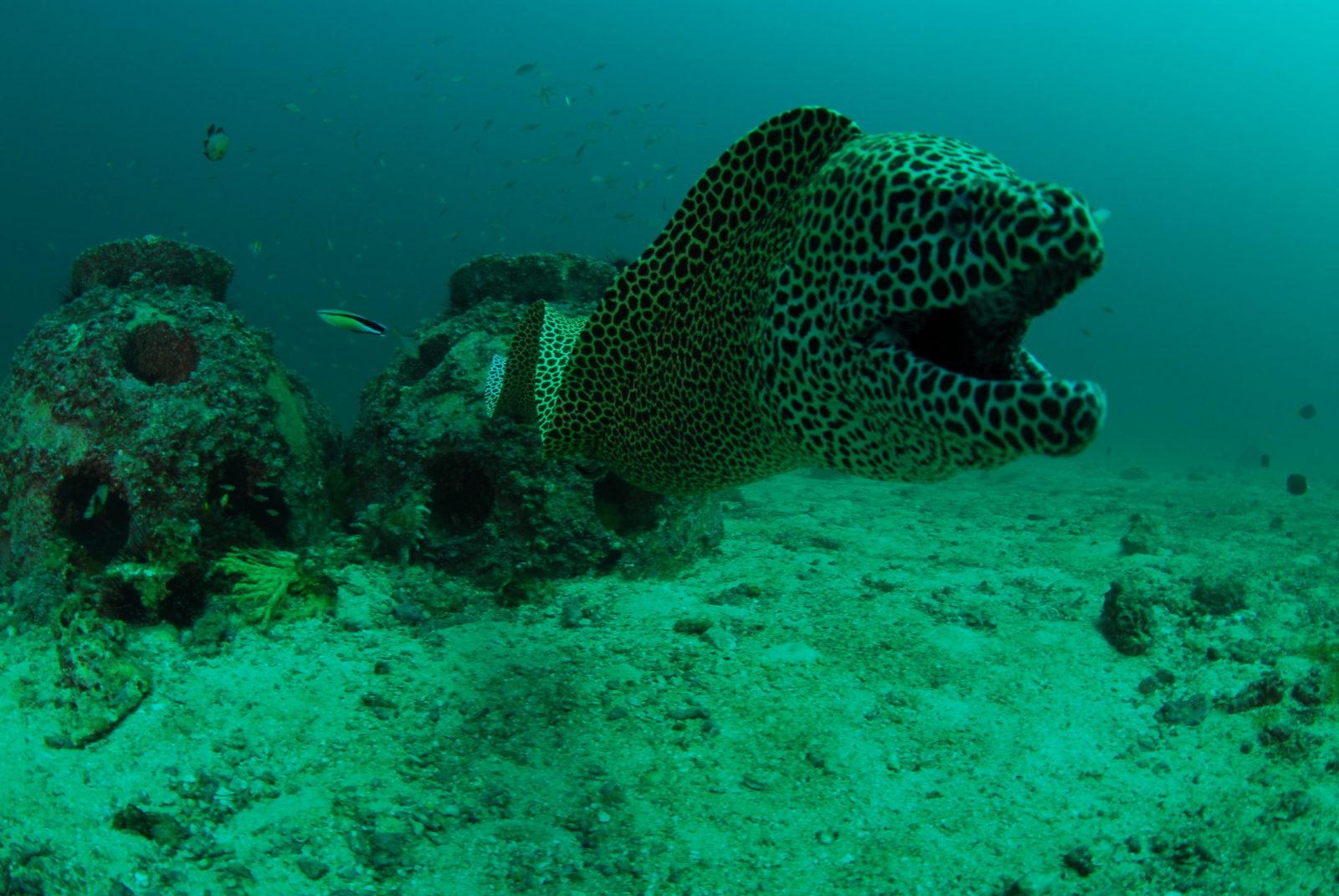 The dive began on a shallow boulder field and barely a minute into the dive the undulating form of a large free swimming honeycomb moray came into view. Apparently unfazed by divers it headed straight for me, mouth opening and closing almost as if we're trying to say “move, you are in my way”.  After taking a couple of quick photos I dutifully moved out of the way and the moray swam past.

It was to be the first encounter of many with these mesmerising and photogenic creatures. In fact they are my abiding memory of diving in Oman.  As the dive continued the boulder field gave way to a wall that dropped down to about 25 meters and rose to just below the surface.  Almost every inch of the wall was covered in yellow, green and purple whip corals. Small schools of grunts, a variety of reef fish and of course more moray eels sheltered in this forest of coral. 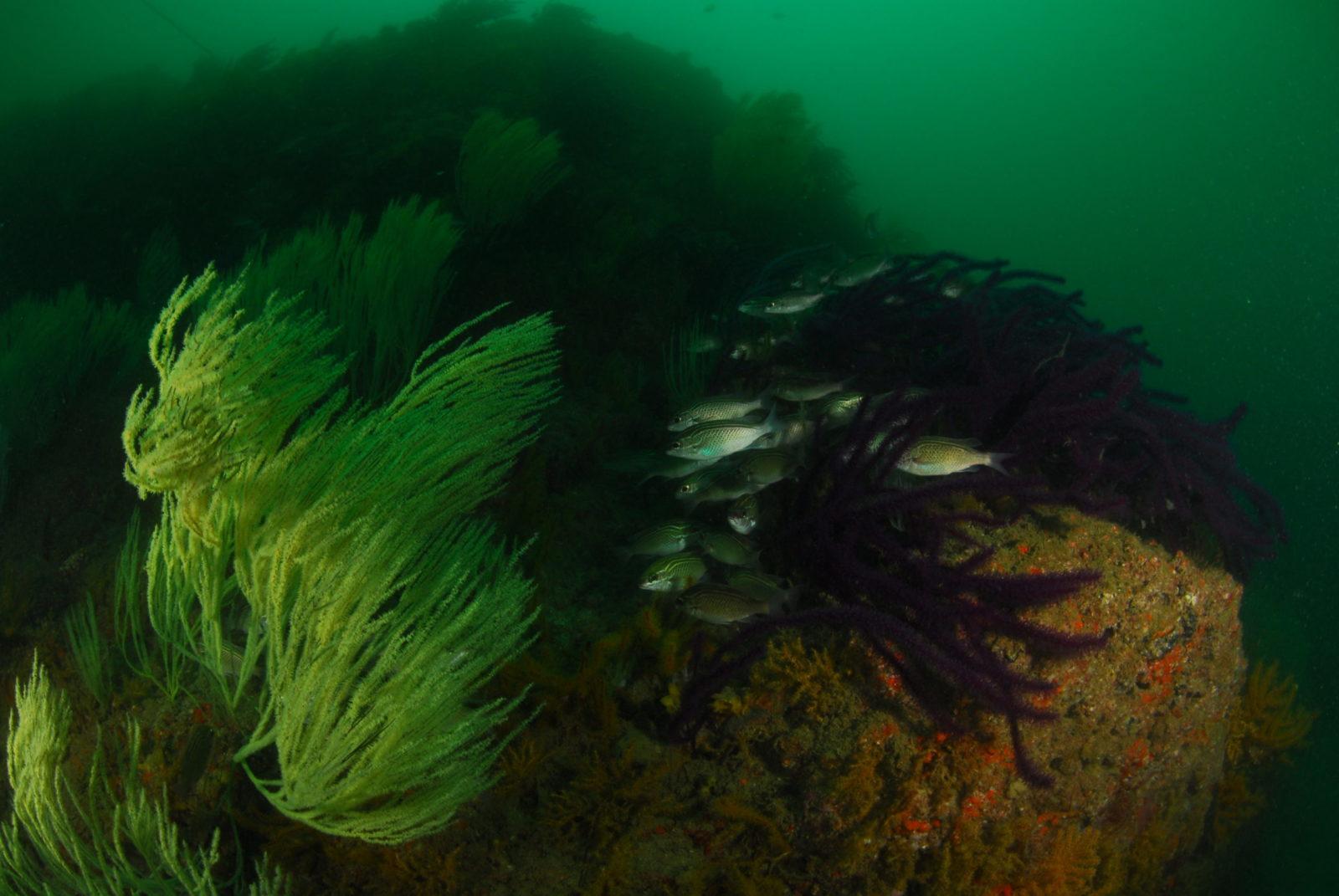 The second dive was at First Entrance. This is a shallower dive along the wall of one of the many inlets along the coast. At around 7 or 8 meters the wall gives way to a gentle slope where stingrays hide and goatfish frenetically graze. Large terraces of table corals dominate the later stages of the dive and provide a home to vast numbers of sergeant majors which dart in every direction as they are approached.

Fahal Islands is an impressive limestone rock that juts out of the sea and can be reached after a 30-minute boat ride off the coast of Muscat. The Island boasts 9 dive sites. My personal favourite was North point which can be dived two ways, you can either drop on the west side of the island and swim around the north point into a shallow bay, or you can start in the bay and head around to the west. For the first dive there, we started on the west side dropping down about 20 meters. 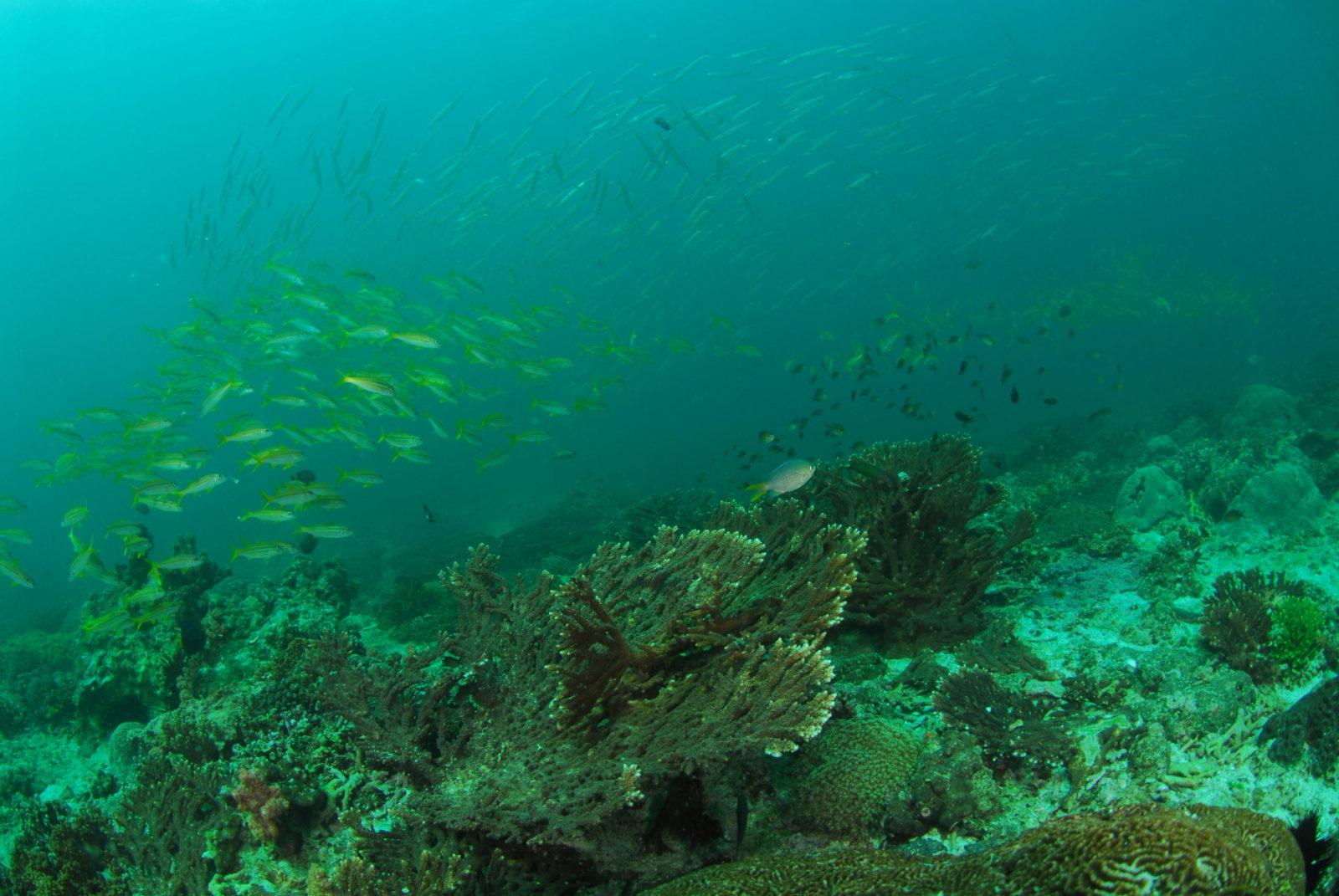 We were greeted by an artificial reef that appeared to be a favourite playground for the ubiquitous honeycomb morays. Further along the site large slabs of rock dominate the topography. As you come around into the bay a gently sloping wall is littered with colourful broccoli corals and jagged staghorn coral.  But for me the highlight of this dive was a cauldron shaped bowl that leads into a narrow shallow gully close to the island on the north point.

It is just teeming with schools of fish, dizzying, disorientating, swarming schools of fish of every description, blue-lined snapper, yellow-lined snapper grunts, sergeant majors, anthias, red tooth triggerfish and yellow strip goatfish are all in abundance. Other dive sites I visited included Bills Bumps a great dive site containing fields of table corals. Yellowtail tangs flitted from one feeding ground to the next and a school of juvenile barracuda swirled just above the reef where they were joined by schools of yellow snapper. 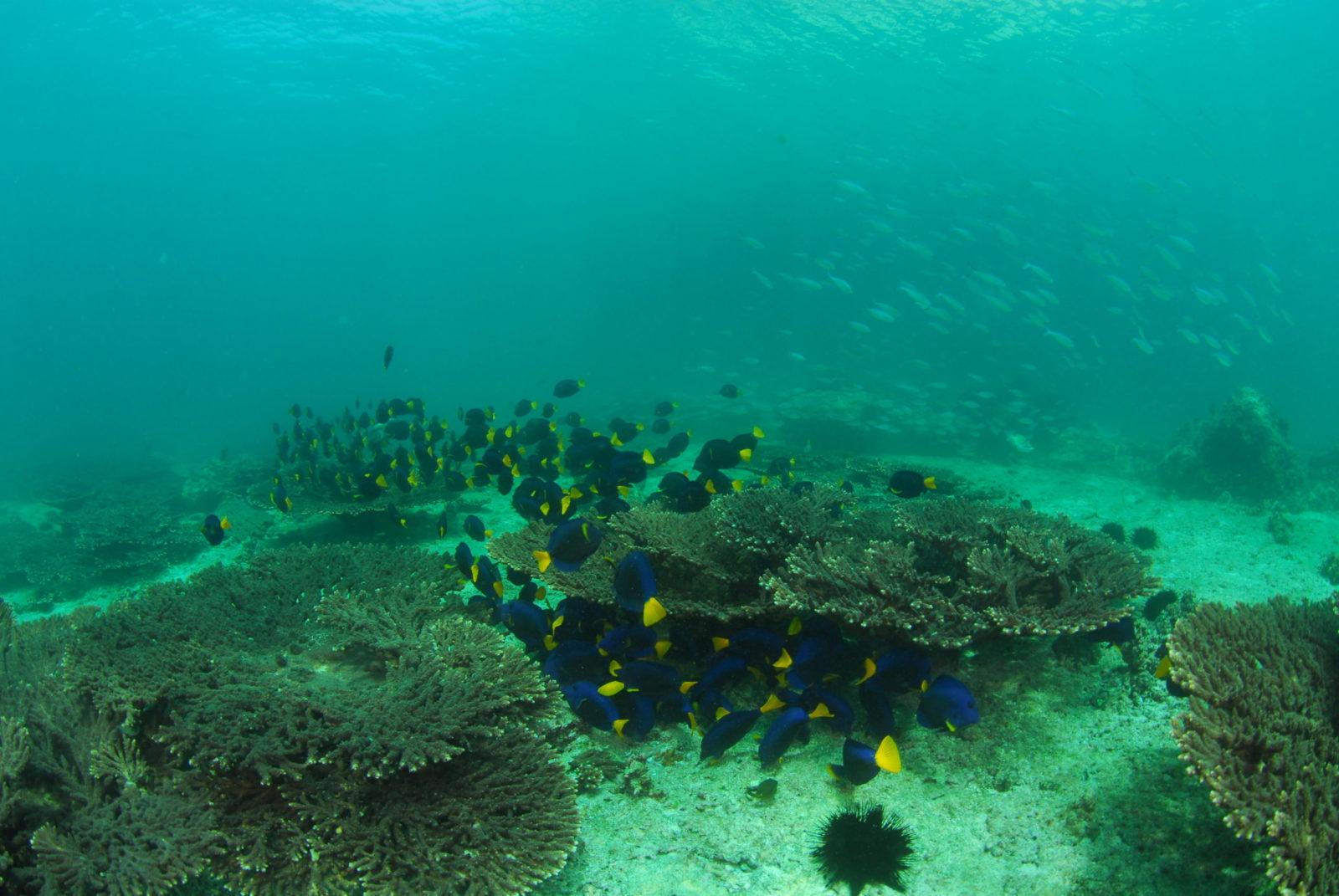 Shark Point is another very good site. A sandy slope descends to around 20 meters where good coral growth attracts a myriad of marine life cuttlefish lurk in the reef, yellowmouth, peppered and grey morays to name a few hide in the corals, Picasso triggerfish, broom tail wrasse, porcupine puffer, emperor and yellow bar angelfish can also be counted among the many residents.

Oman really does have a lot to offer. For a start, you are usually the only boat on the dive site which is a huge plus in my book.  Both soft and hard corals are abundant and there is plenty of marine life, schooling fish in the thousands, cuttlefish, turtles and what seems like moray eels in every crevasse. The Al Munassir is a fantastic wreck and the Daymaniyats offer some truly fantastic diving. 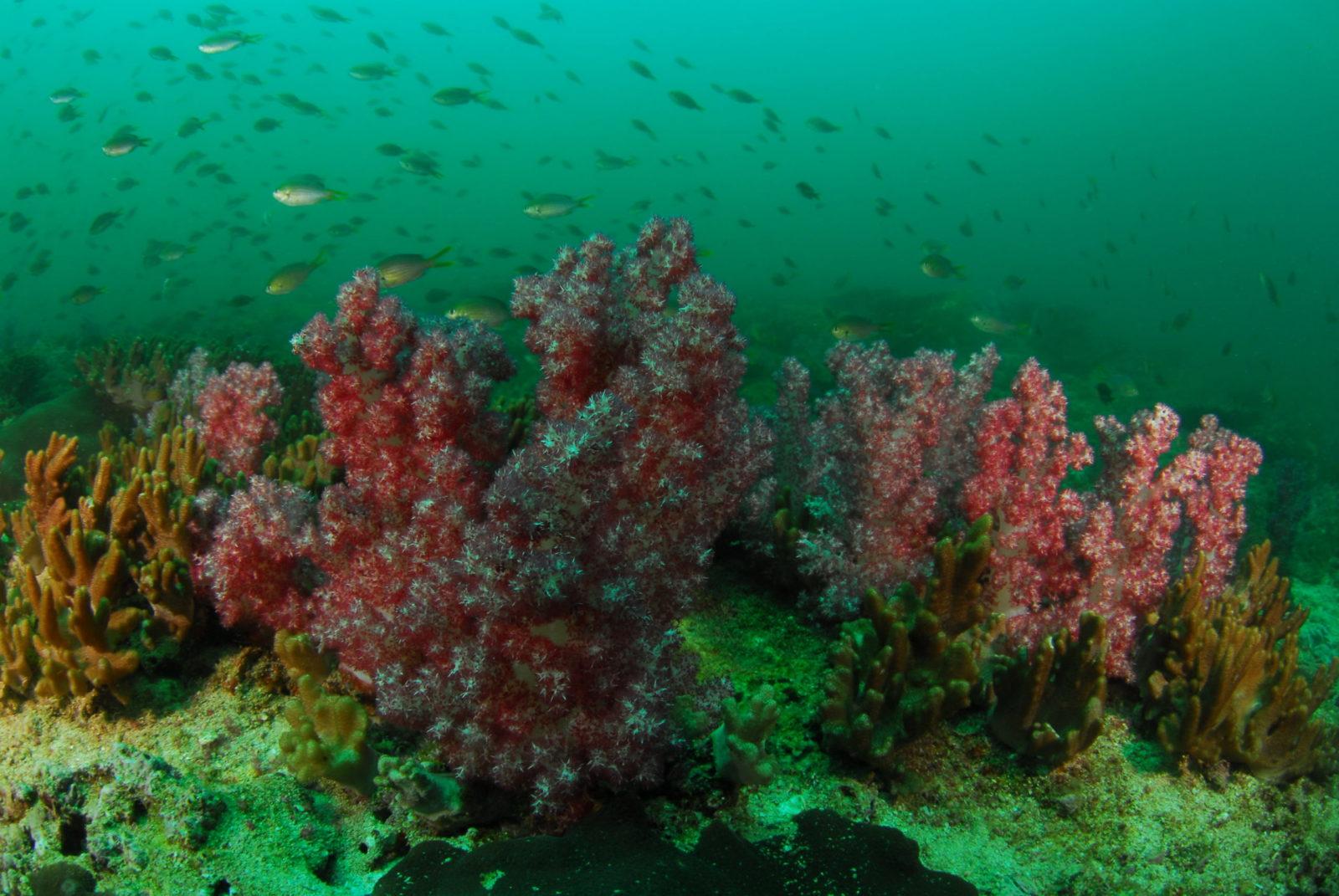 Above the water, you are transported back to the Arabia of Lawrence of Arabia especially when visiting Wadi Shab which is simply stunning.  Muscat feels and looks authentic. It is a beautiful city. The people are very friendly and in the entire week I was there I was not once dragged into a perfume, papyrus, rug or other miscellaneous gift shops, forced to drink scalding hot tea while being enticed into buying something I really did not want.

The Diving is good the city and surrounding areas are very interesting and overall Oman is well worth a visit. In fact, I found that one week was not really enough to fit in everything I wanted to do. So if you want a change from Egypt, to get away from the crowds and experience something a bit different, I would highly recommend Muscat.