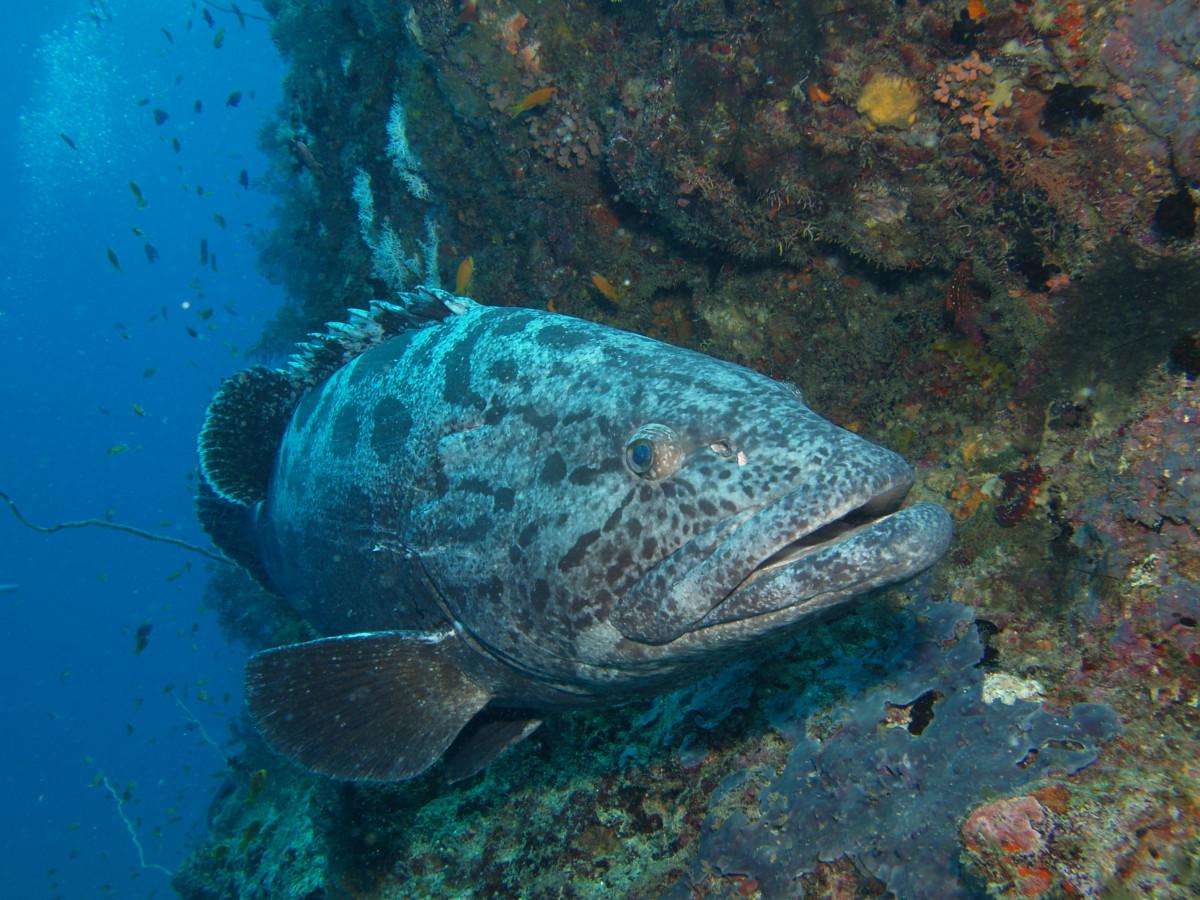 Mafia Island – Tanzania and Whale of a Time

Mafia Island is a hidden gem off the coast of Tanzania, boasting pristine reefs and myriad varieties of marine life, as well as the opportunity to swim with Whalesharks.

It was right there in front of me, yet still I couldn’t believe I was actually seeing it. A six-metre whaleshark in all its spotted glory was cruising past just a couple of metres away from me, and it just didn’t seem real.

After wanting to see this magnificent creature for more years than I can remember, finally being in the water with one seemed like an alternate reality. I was finning as hard as I could alongside it, snapping away with my camera, but had no idea what the shots would come out like as the visibility was down to two or three metres with lots of plankton in the water.

Suddenly, the huge fish veered round and swam straight towards me. Here I was, literally face-to-face with the ‘Moby Dick’ which had taunted me for thousands of dives, and I took a couple of quick shots as it bore down on me. Then it dawned on me – it wasn’t going to stop! I hastily swam/rolled/dived to the side and it narrowly missed me as it leisurely swam past.

I bobbed on the surface getting my breath back, and thanked my stars that I had come to Mafia Island off the coast of Tanzania. It looked like its reputation as one of the best places to encounter whalesharks was richly deserved…

Mafia Island is one of three islands off the coast of Tanzania, nestling in the Indian Ocean alongside the more-famous Zanzibar and Pemba. The coral reefs, bays, sand bars, lagoons and beaches of the Mafia Archipelago are now part of the Mafia Island Marine Park, Tanzania’s first marine national park.

Our home for the week was Shamba Kilole Lodge, which sits next to the entrance to the marine reserve. The dive centre used for supplying boats, cylinders, weights and any necessary rental equipment was Big Blu, which is a five-minute minibus ride away from the lodge, so no long transfers needed.

The whalesharks are located on the opposite side of the island, between Mafia and the mainland, and so the plan was to head over early one morning mid-week to try and see the monster fish. In the meantime, we were going to be diving the reefs and walls of the marine park to see what other undersea delights Mafia had to offer.

The boats used by Big Blu are large, comfortable, sailing boats, which have plenty of room for divers and equipment. The majority of the time the crews will use the auxiliary engine, but when the sails are up and you are cruising silently along, it is a magical experience.

We dived several sites within an hour or so of the dive centre, including a fast drift dive through the Kinasi Pass, which turned up large stingrays, turtles, batfish and shoals of jacks and trevally; and Jina Wall, Jina Pass, and Jina Reef, which were covered in hard corals, sponges and a multitude of reef life.

However, the undoubted highlight of the week’s diving was Dindini Wall. We dropped into the water on top of the reef, which was just 7-8m below us. Swimming to the edge, a sheer drop formed a wall down to about 25m, where it sloped off to rocky patches and endless sand out into open ocean. The visibility was excellent, easily 30 metres or so, and as we meandered along the wall, we were dive-bombed by juvenile turtles launching themselves off the top of the wall.

The wall itself is home to nudibranchs, crustaceans and small reef fish, but the close proximity of the open ocean also brings in the ‘big boys’, so we encountered several large turtles, a huge grouper, numerous shoals of jacks, trevally and small barracuda, monster whiptail rays and some nice big pufferfish. Sharks can often be seen cruising along this wall, but unfortunately none put in an appearance this time.

Another excellent diving day was had on an all-day safari to Mange Reef and Kitutia Reef to the south of Mafia island. We took Big Blu’s larger sailing boat, so we had plenty of room to relax on the journey to the reefs.

Our first dive was on an area of coral reef absolutely teeming with life. Shoals of anthias darted above the reef, lionfish hunted in and around the hard corals, and every other Indian Ocean reef dweller you can imagine put in an appearance sometime during our hour underwater. Everywhere you looked, your eyes were met with an explosion of colour.

The second dive was an extremely fast drift, which was made all the more exciting due to the ten-metre vis. Flying along over a sandy bottom and meeting occasional coral bommies gives you quite a thrill, especially when they appear out of nowhere! The strong current was pulling us out into the open sea away from the sloping wall, so we tucked close to the seabed and finned furiously back to the wall, then relaxed and enjoyed our wild ride past all manner of reef fish and yet more corals.

Between dives we’d chilled out on a sandbar where the crew had erected a sun shade and cooked fresh fish. Sitting with your feet in the sand, munching on delicious freshly cooked fish and tasty fruit, surrounded by endless turquoise seas. It was the very picture of an island paradise.

Excellent scuba diving aside, however, it was the whalesharks that everyone on the trip had come to Mafia wanting to see, so on the Wednesday morning, we set off from the lodge at a ridiculously early time to drive across the island and rendezvous with our whaleshark snorkelling boat. The skipper boasted he was the best whaleshark spotter on the island, and reckoned we would get a whaleshark within ten minutes.

Three hours of endless motoring up and down the coastline later, we had to admit defeat, but we were not beaten yet – we arranged a last-ditch attempt on the morning of our final day. We were flying out on that afternoon, so if we didn’t get them then, we were finished.

Friday morning came and we headed off at the crack of dawn once again. Scrambling into the boat, as we motored out to sea, everyone was getting a strange sense of déjà vu. But then is all changed. One of the crew spotted a disturbance in the water, and sure enough, it was a whaleshark. Everyone excitedly kitted up and, on the command, slid silently into the water.

The skipper stood on the deck directing operations, he told us where the shark was and which direction to swim/look in. The shark made a couple of reasonably close passes, then we got back in the boat and went looking for more.

Soon we were spotting whalesharks everywhere, and at one point we could see ten in different directions around the boat. However, while my personal best interaction was the aforementioned near head-on collision with my own whaleshark (no one else was in the water at that pointm so it was ‘my’ whaleshark), several of us got an unexpected thrill when we were all looking towards a small two-metre juvenile that the skipper had located when suddenly a huge eight-metre-plus animal came out of nowhere and went right underneath us and the boat!

Heading back into shore after two hours of endless whaleshark encounters, everyone had a satisfied look on their face. Mafia Island really is an unspoilt piece of Africa. Take a wander into the village near the lodge and you are confronted with mud huts, dirt floors and basic amenities. This really is ‘back to basics’, and none the worse for it.

The lodge is comfortable and the food is great, the people are friendly and welcoming, and the island is stunning above and below water. The marine reserve is obviously working, as the reefs are in pristine condition and home to huge shoals of reef fish, as well as larger creatures. And then there is the icing on the cake, the whalesharks. Mafia Island is reputed to be one of the most-reliable spots on the planet at which to interact with whalesharks, and after our Friday morning out at sea, I can well believe it. At long last, I could now tick that off my ‘wish list’.

Mafia Island is a hidden gem off the coast of Tanzania, boasting pristine reefs and myriad varieties of marine life, as well as the opportunity to swim with whalesharks.