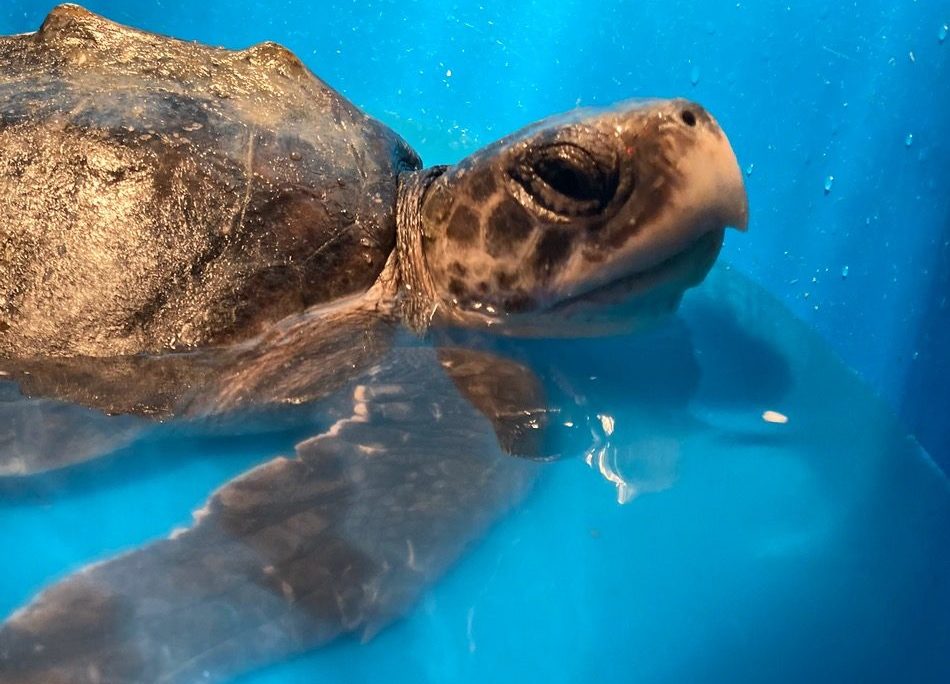 A Kemp's Ridley sea turtle – the rarest and most-endangered species in the world and normally found in the Gulf of Mexico – that was found barely alive on a North Wales beach is making a remarkable recovery at the Anglesey Sea Zoo.

The turtle was found on Talacre Beach by Ash and Samantha James, who were out walking their dog. They initially thought the animal was dead, but decided to report the finding to the British Divers Marine Life Rescue (BDMLR).

They returned to the beach with their son Gethin and relocated the turtle for the BDMLR, and we amazed when it moved slightly when gently prodded.

The turtle, which was initially named Raphael by the couple but is now known as Tally after the beach it was found on, was collected by staff from the Anglesey Sea Zoo and taken for treatment for cold-water shock.

Tally was placed in a specially adapted incubator to help regulate its temperature, and after a very gradual increase, it is now approaching its normal rate, moving out of critical care and into the recovery stage. Tally is currently housed in a shallow tub in a purpose-built igloo-type construction to enable close monitoring and hand's-on treatment and will be moved to a larger tank over the next few weeks.

Ms Frankie Hobro, Director and Owner of the Anglesey Sea Zoo, said: “We are seeing regular burst of activity and we are gradually increasing the depth of water in Tally's tank. The turtle is still on rehydration therapy, vitamins and antibiotics, but so far, there do not appear to be any underlying conditions of concern as a result of its cold-stranding and these early stages of recovery are currently going well and looking extremely promising.”

It is thought the turtle was pushed way off course by Atlantic storms which affected the jetstream. Sadly, two other juvenile Kemp's Ridley turtles were found on beaches in Scotland but had already died.

Ms Hobro added: “We are extremely grateful for the amount of public support we have had since announcing Tally's arrival and we would like to thank everyone for the well wishes and encouragement we are receiving.

“We are very pleased with Tally's progress so far and we are now becoming hopeful that if this continues, the turtle may make a full recovery so that he or she can be flown back to Mexico and released into warmer waters where it belongs.”

A GoFundMe campaign to raise money to get Tally back to the Gulf of Mexico has been set up.