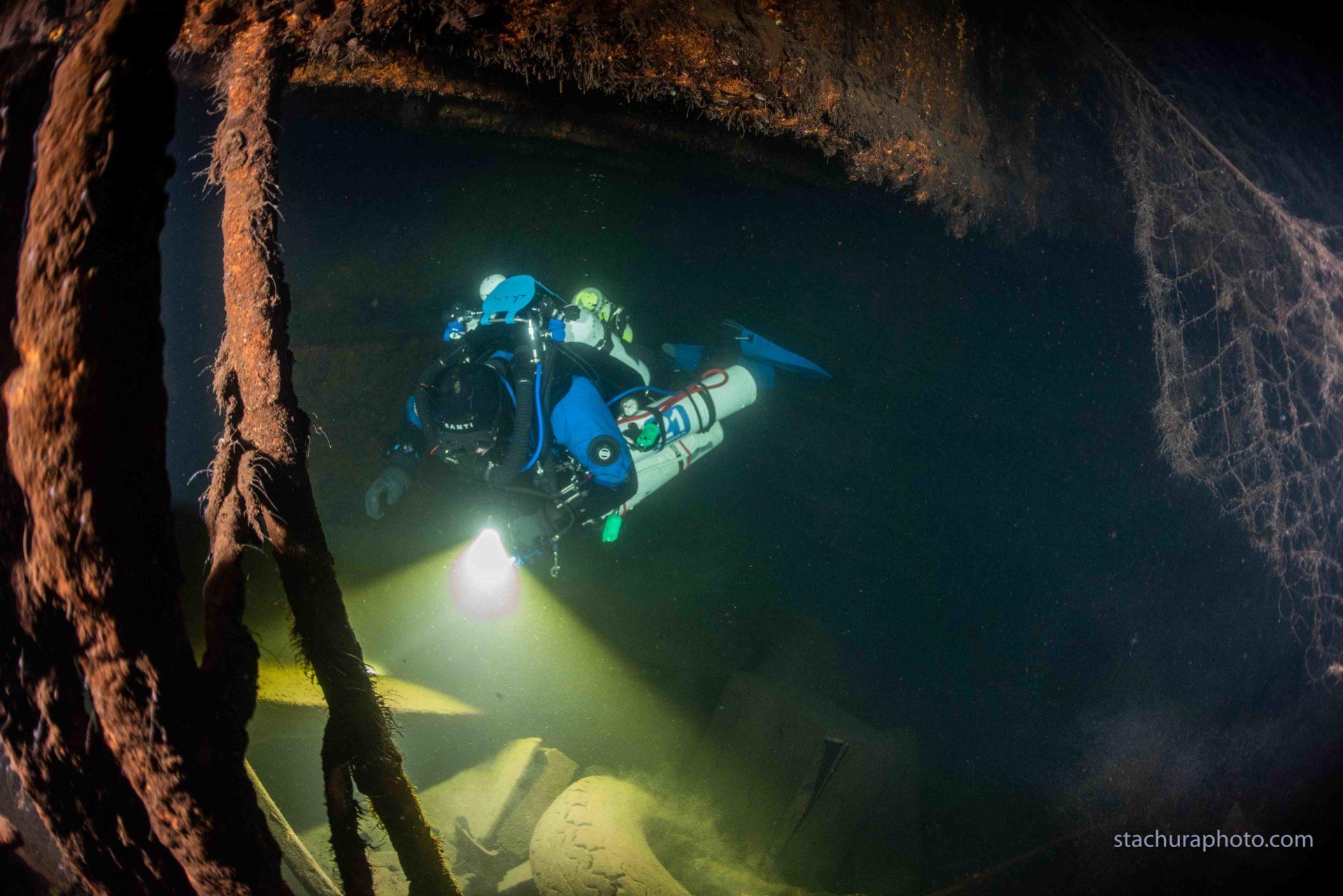 The SS Karlsruhe was the last ship to live Pilawa (the port of Koenigsberg) in 1945 before the Russian occupation of East Prussia as part of Operation Hannibal – the largest marine evacuation in history, which also involved the legendary Gustloff, Goya and Steuben, which saw some two million refugees transported to the west. Research continues on the Karlsruhe shipwreck

On that last voyage, she set off on April 12 with 150 soldiers of the ‘Herman Gornig' regiment, 25 railroad workers and 888 refugees on board. Together with the crew there was a total of 1,083 people. The ship also took 360 tons of ‘returnable goods' in uneven chests; and military vehicles. A convoy consisting of four freighters and three minesweepers was formed right before the Hel Peninsula.

This convoy left the roadstead of Hel on 12 April in the evening, but on the morning of 13 April, she was detected by Soviet planes that attacked the Karlsruhe and sank it. The ship went down within three minutes with its entire cargo, and only some 100 people were saved. The position of the attack was imprecise, and the resting place of the wreck was unknown – until recently.

The 66-metre-long, 897-ton SS Karlsruhe was finally discovered during the Baltictech September expedition.

Tomasz Stachura explained: “Karlsruhe was an old small ship, but in those days, every unit capable of evacuating people to the west was important. We had been looking for the wreck for over a year to realize that it could be the most interesting, undiscovered history from the bottom of the Baltic Sea. Karlsruhe set off on her last voyage under extreme tight security quite heavily loaded as for this ship. The wreck rests several dozen kilometers north of Ustka at a depth of 88m. It is virtually untouched. In its cargo holds we discovered military vehicles, porcelain and many chests with so far unknown contents.”

So what is this mystery? Well, it centres on the iconic Amber Room. This was a chamber decorated in amber panels backed with gold leaf and mirrors, that was located in the Catherine Palace near St Petersburg in the 18th century. It was considered an ‘Eighth Wonder of the World', but it was looted and dismantled during World War Two by Nazi forces and after being taken to Koenigsberg for reconstruction and display, it vanished, never to be seen again.

The Amber Room's last known whereabouts cross-over with the Karlsruhe's final voyage. The history and available documentation indicate that the German steamer Karlsruhe was leaving the port in a great hurry, and with a large cargo after the Germans had to evacuate Koenigsberg, which has raised plenty of questions.

“All of this, when put together, stimulates people's imagination. Finding a German steamer and a chest with unknown contents resting at the bottom of the Baltic Sea can be significant to the entire history,” said Tomasz Zwara, a member of the Baltictech team.