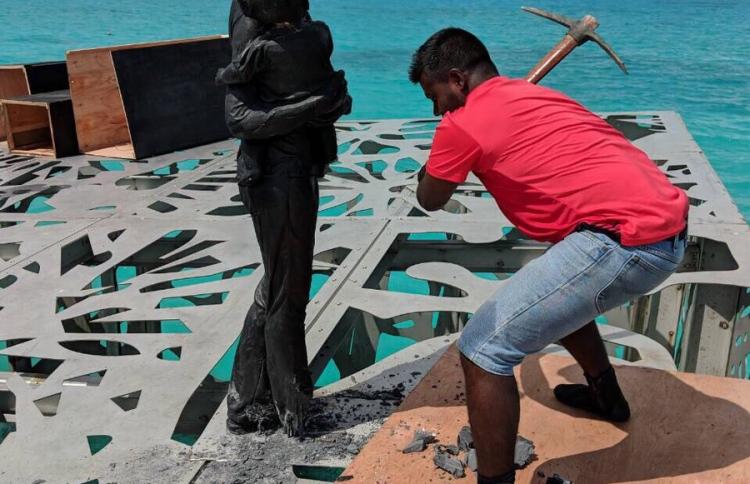 Acclaimed English sculptor and environmentalist Jason DeCaires Taylor said he was ‘extremely shocked’ to learn that his Coralarium sculpture, which sat just offshore from the Fairmont Maldives’ Sirru Fushi Resort, has been destroyed by the Maldivian authorities.

The Coralarium, which according to DeCaires Taylor was conceived to ‘connect humans to the environment and nurture a space for marine life to thrive’ was the first-ever museum of its kind. The large steel frame had cut-outs that aimed to mimic the marine world and allowed sea life to explore freely within, acting as a new habitat for coral and other species, while 30 human figures were positioned on top and inside the frame at tidal level, with others submerged beneath. Nine months in the making, its creation involved a large team of marine engineers, steel fabricators, divers and mould-makers. Changing according to light and tides, the artwork was open to resort guests and day visitors.

However, despite the government of the popular holiday destination being involved in a constant dialogue regarding the Coralarium, and having regular consultations, on Friday 21 September, local police officers carried out a court order to destroy the exhibit, using pickaxes and other tools to very publicly smash the human-like figures that – as with most of his works – formed the focal point of the installation.

DeCaires Taylor commented: “The Maldives is still beautiful, with a warm and friendly population, but it was a sad day for art and a sad day for the environment”, while the Fairmont Maldives said: “While we were very surprised by the sudden removal of eco-art pieces by the authorities, we respect the people, traditions and customs of the Maldives, and the removal process was peaceful and friendly.”

The destruction of the installation followed condemnation by local Muslim leaders and politicians, including outgoing-President Abdulla Yameen and President-elect Ibrahim Mohamed Solih, of what they deemed to be the ‘un-Islamic depiction of human figures’ and ‘a threat to Islamic unity and the peace and interests of the Maldivian state’.

The Accor hotel group, which owns the Fairmont resort, said in a statement: “Permissions were sought and granted before the installation. This artwork was intended as an immersive way to educate people about the environmental concerns impacting the Maldives and the world, while helping to rejuvenate and restore local coral reefs.”

The main Coralarium gallery structure and the tree-lined underwater coral boulevard remains intact and the hotel group says it has initiated ‘re-imagination plans with the artist for a new attraction within the Coralarium that will be in harmony with the locals and environment’.

On a brighter note, the new installation by DeCaires Taylor titled Nexus has been officially unveiled in Oslo, Norway, and comprises of 15 sculptures which were commissioned as part of a new children’s art centre aiming to encourage the young community to explore the diverse marine life which surrounds the fjords.

Heed the words of Martin Niemöller: “Then they came for me – and there was no one left to speak for me.”