The Atlantis of Italy – A Dive into History 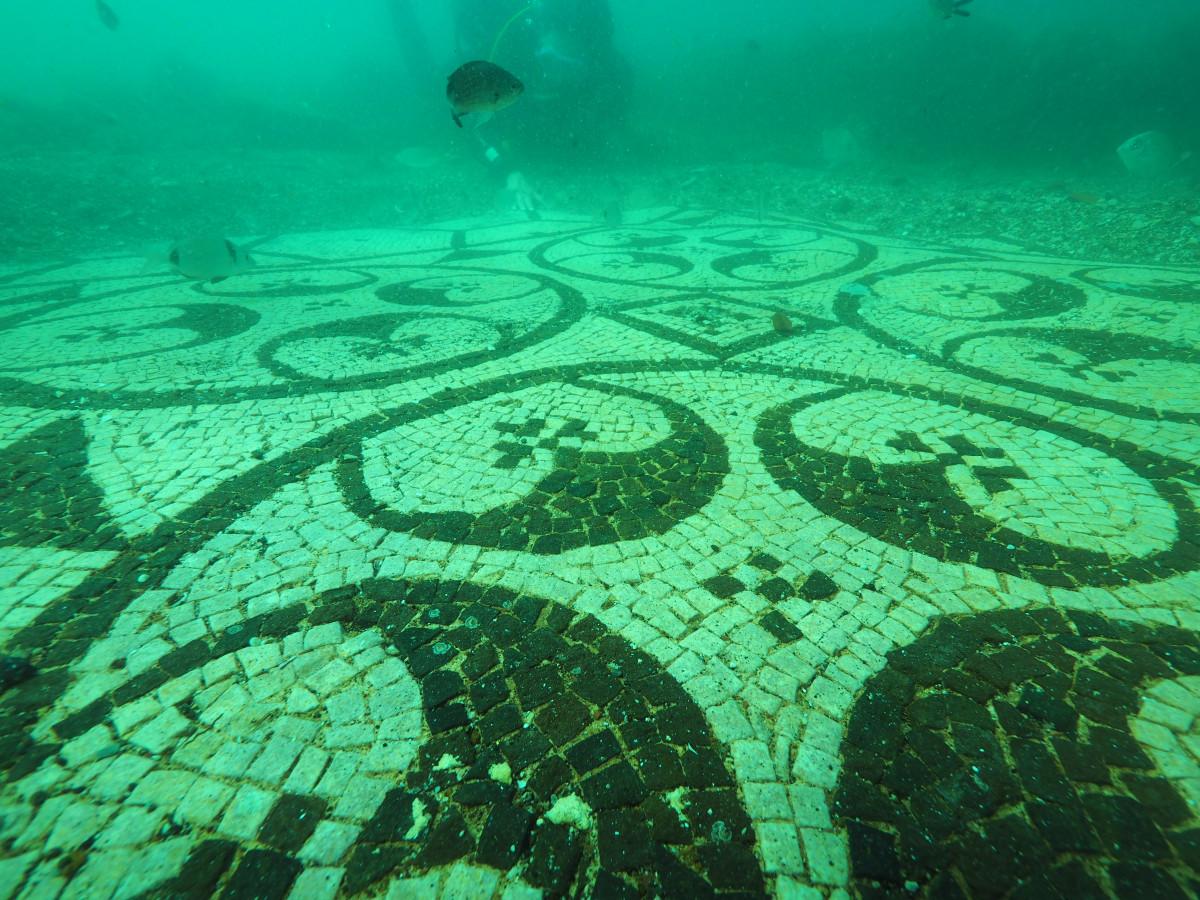 Wakatobi’s Pelagian Dive Yacht To further expand their diving horizons,...
Contents hide
1 Dean Martin was intrigued by tales of a submerged Roman city in the waters off Italy, and his subsequent exploration of this archaeological wonder more than met the hype
1.1 Magnificant mosaics
1.2 The Nymphaeum of Emperor Claudius

Dean Martin was intrigued by tales of a submerged Roman city in the waters off Italy, and his subsequent exploration of this archaeological wonder more than met the hype

While on a trip to Naples, I had heard about a place where you could literally dive into history. In its heyday, the classical Roman city of Baia was the hedonistic Las Vegas of the time, but now its remains are partying beneath the waves – and as divers, we are honoured to be able to visit these amazingly preserved historical relics. 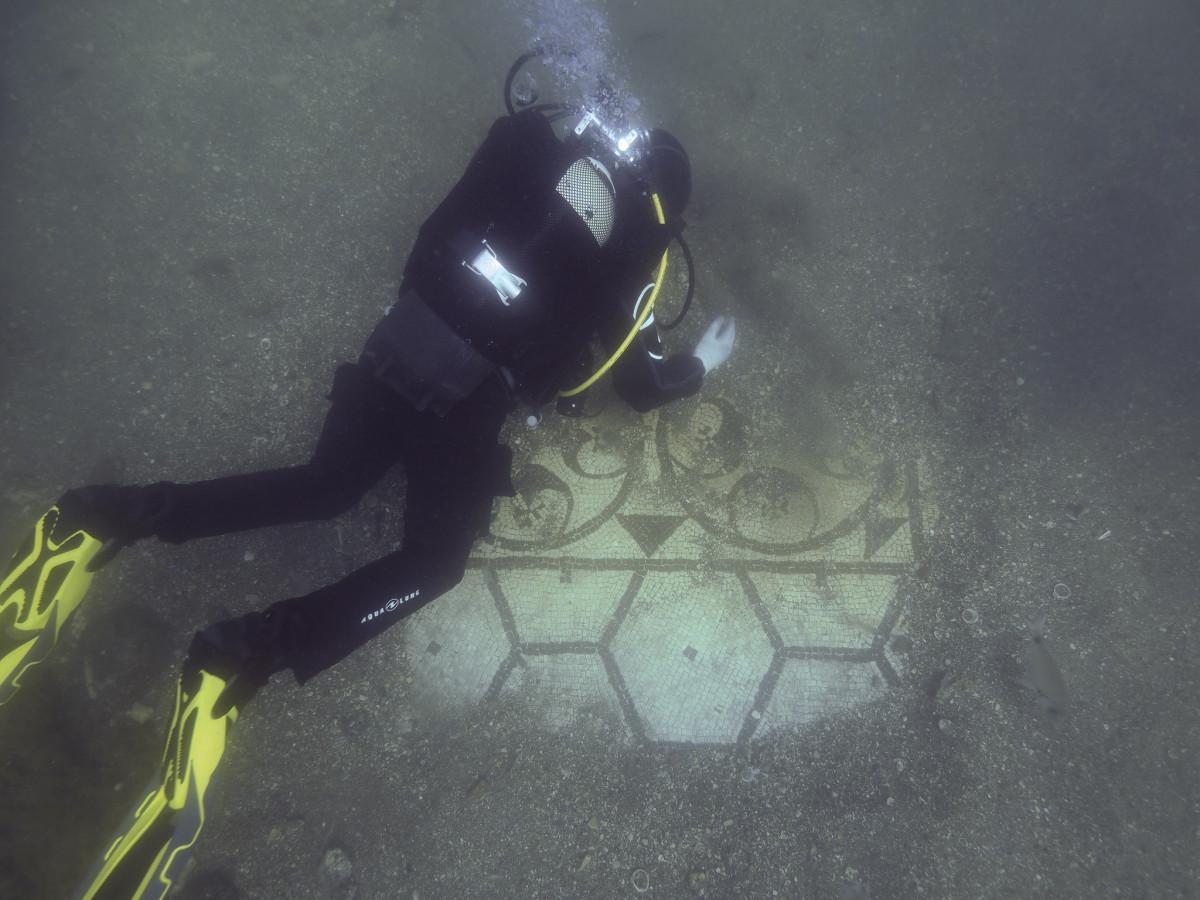 Baia was an ancient Roman town situated on the northwest shore of the Gulf of Naples and now in the area of Bacoli. It was a fashionable resort for centuries, particularly towards the end of the Roman Republic, when it was reckoned to be superior to Pompeii, Herculaneum and Capri by the super-rich of the day, who built luxurious villas here from 100 BC to 500 AD. It was located over natural volcanic vents, and thus was renowned for its healing medicinal hot springs, which occurred all around the city and were quite easy to build spas over. It was also notorious for its hedonistic offerings and the attendant rumours of corruption and scandal.

Unfortunately, the good times were not to last, and the city was sacked by Saracens in the 8th century. By 1500, the remains of the formerly luxurious town were abandoned. After the city remains were emptied, the water level slowly rose due to the same volcanic vents that were once a draw to the area, and most of the ancient ruins were drowned under the shallow waters of the bay. 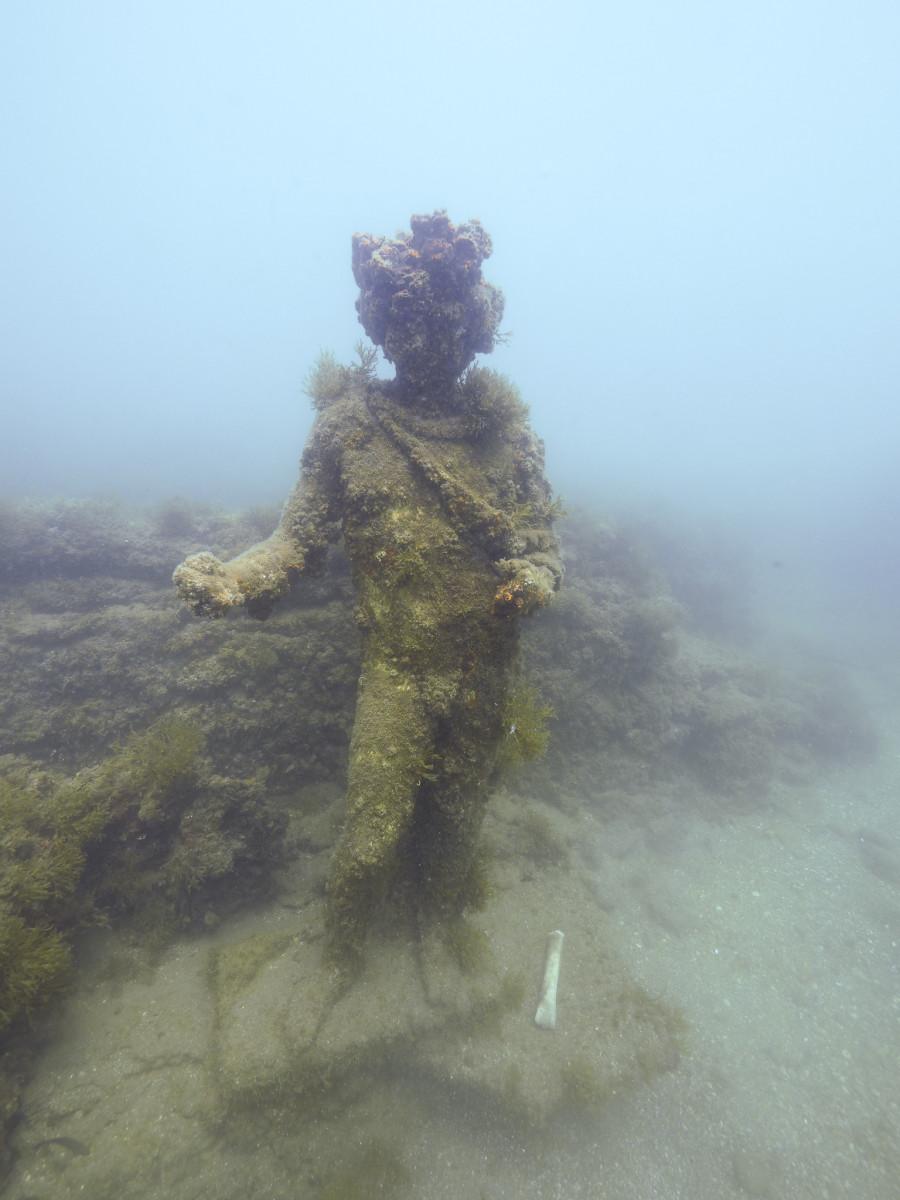 Recent underwater archaeology has revealed many of the fine buildings, statues and roads in varying states of disrepair, and now they are protected in the submerged archaeological park which is open to divers and snorkellers.

I arrived at Subaia Dive Centre and was greeted by Penelope and Ornella, who spoke fantastic English. We had a mixture of divers from various countries – USA, Canada and another couple from the UK – and she proceeded to explain all about the luxury villas of Baia, how they had come to end up sunk into the sea, and which areas we’d be diving on this excursion. 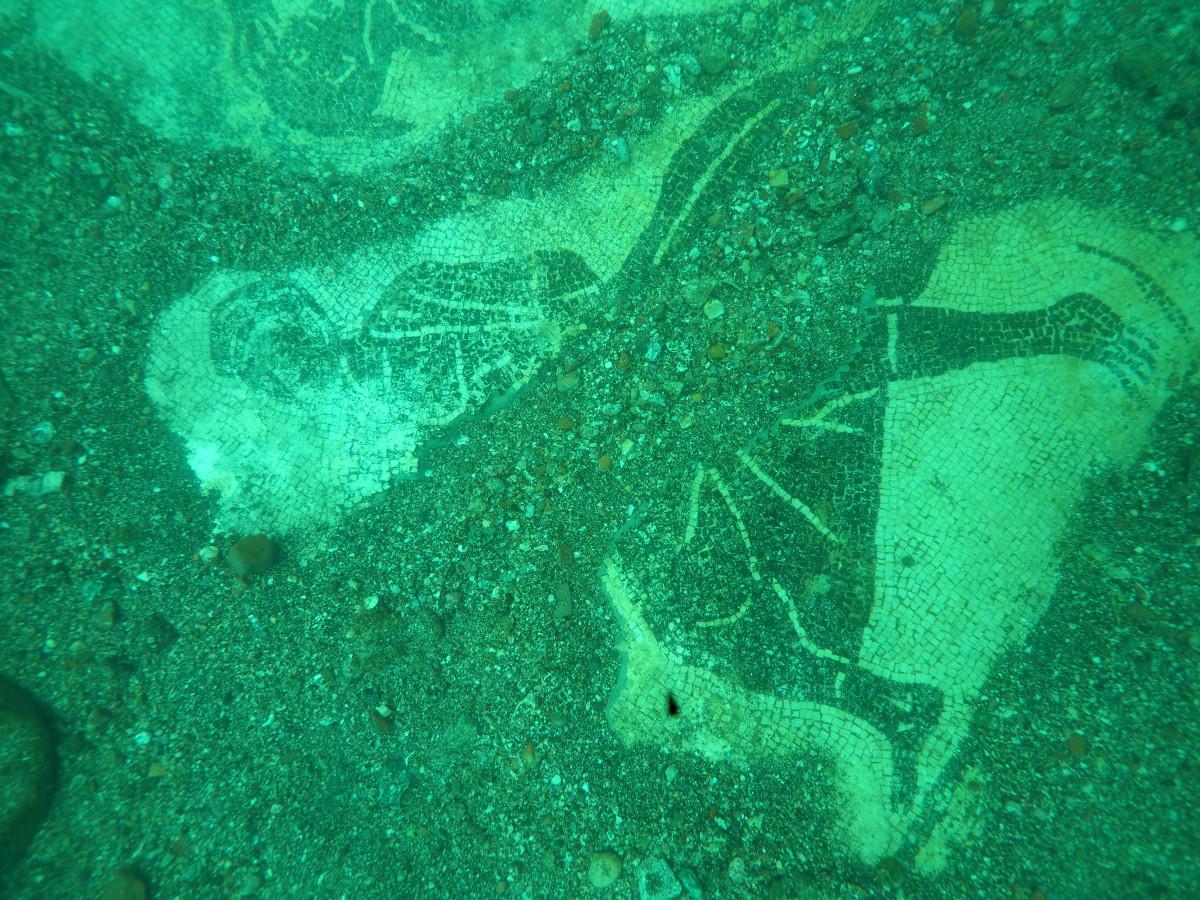 The day consisted of two shallow dives on the Roman remains, neither of them more than 5m deep. With it being so shallow – and thus suitable for anyone from novice to advanced – you can easily use the same cylinder for both dives, so no kit-swapping in between needed.

Our dive guide explained what was going to happen on the first dive – to see some mosaic floors – after we left the Zodiac and got into the water. We were to follow him down to the seabed and form a semi-circle in front of him.

Both mosaics are made with black and white stones and are covered by a layer of sand that protects them from algae and marine organisms. Moving gently, he would then start to clear the sediment to expose the mosaic floors and statues. 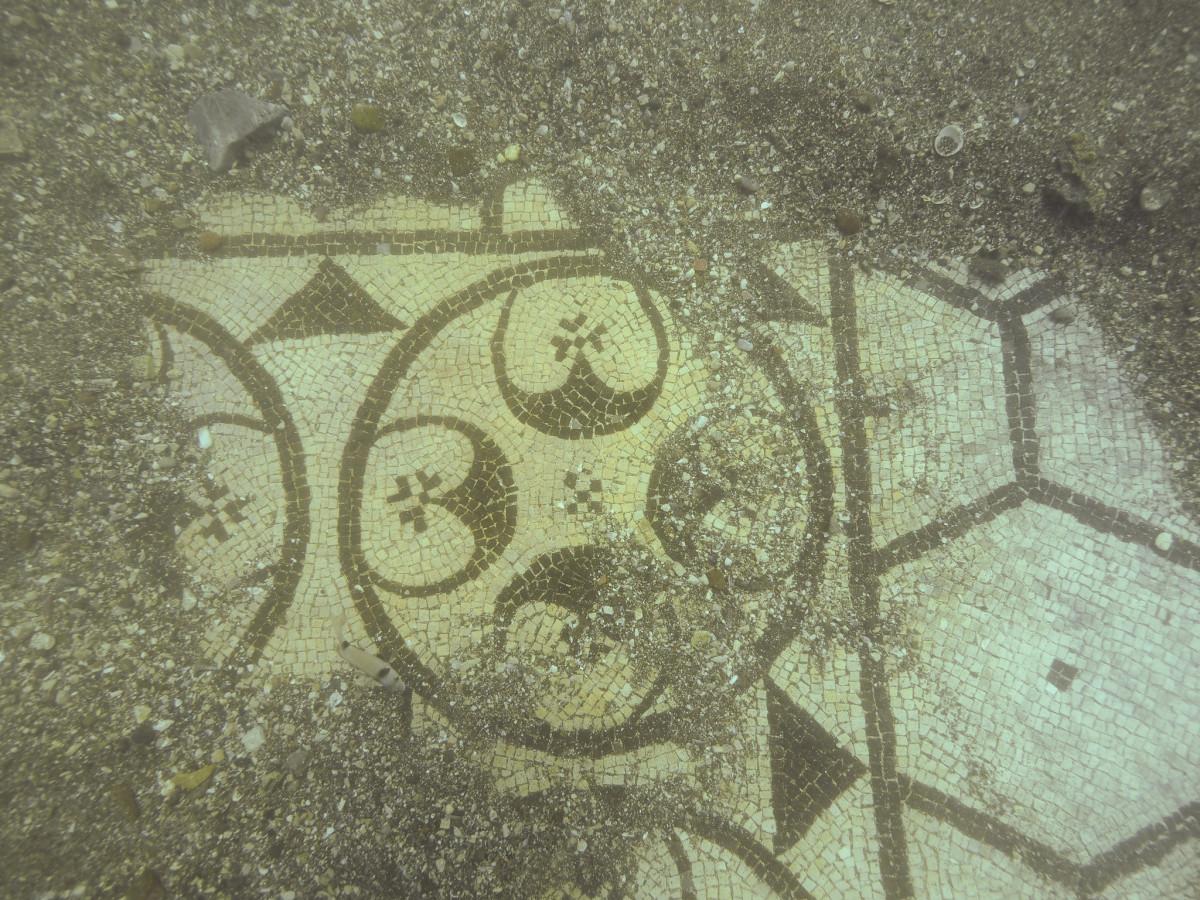 It was truly amazing to actually see these mosaic works of art appear in front of our eyes, and to be able to admire the different hexagonal shapes with geometrical features on one floor, and two men fighting on the other. Both are astoundingly well preserved, especially considering that they are over 2,000 years old but almost look like they were created yesterday.

We were all allowed to take it in turns to capture images before the exquisite floors were covered back up for protection.Once the sand had been carefully put back in place, you couldn’t even tell what amazing historical relics lay beneath. We then proceeded back to the boat to await our next encounter, and the boat was full of excited chatter from the divers. I don’t think anyone on the boat could believe what we had just witnessed. 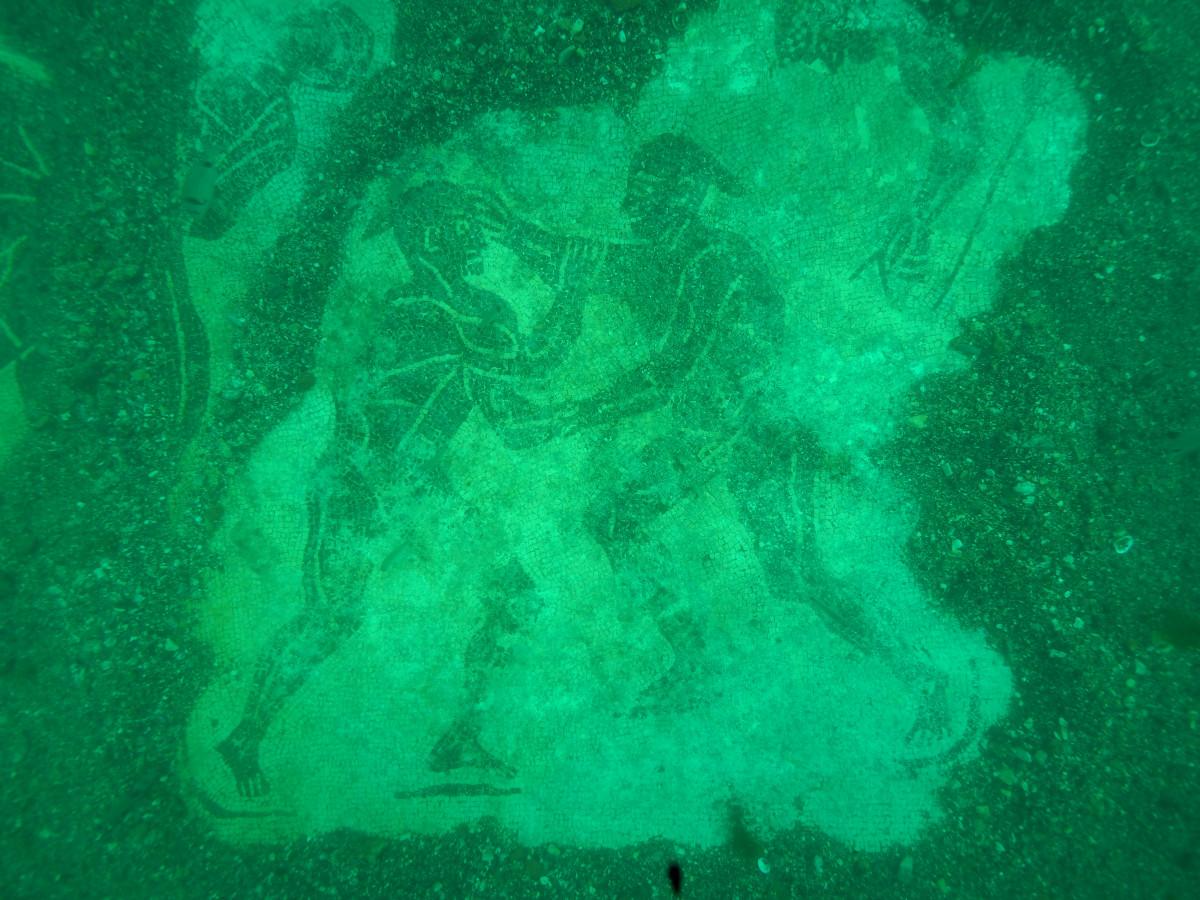 The Nymphaeum of Emperor Claudius

We moved to a new mooring not too far away, close to Epitaffio Point, and started to kit up again. This time we were going to be diving on the Nymphaeum of Emperor Claudius, basically a huge villa where he and his friends came to sate their decadent desires.

Dropping into the beautiful blue waters of the Mediterranean, we followed our guide to the Nymphaeum and were literally blown away by the sheer scale of it. It is absolutely gigantic, and must have been truly awe-inspiring in its heyday. 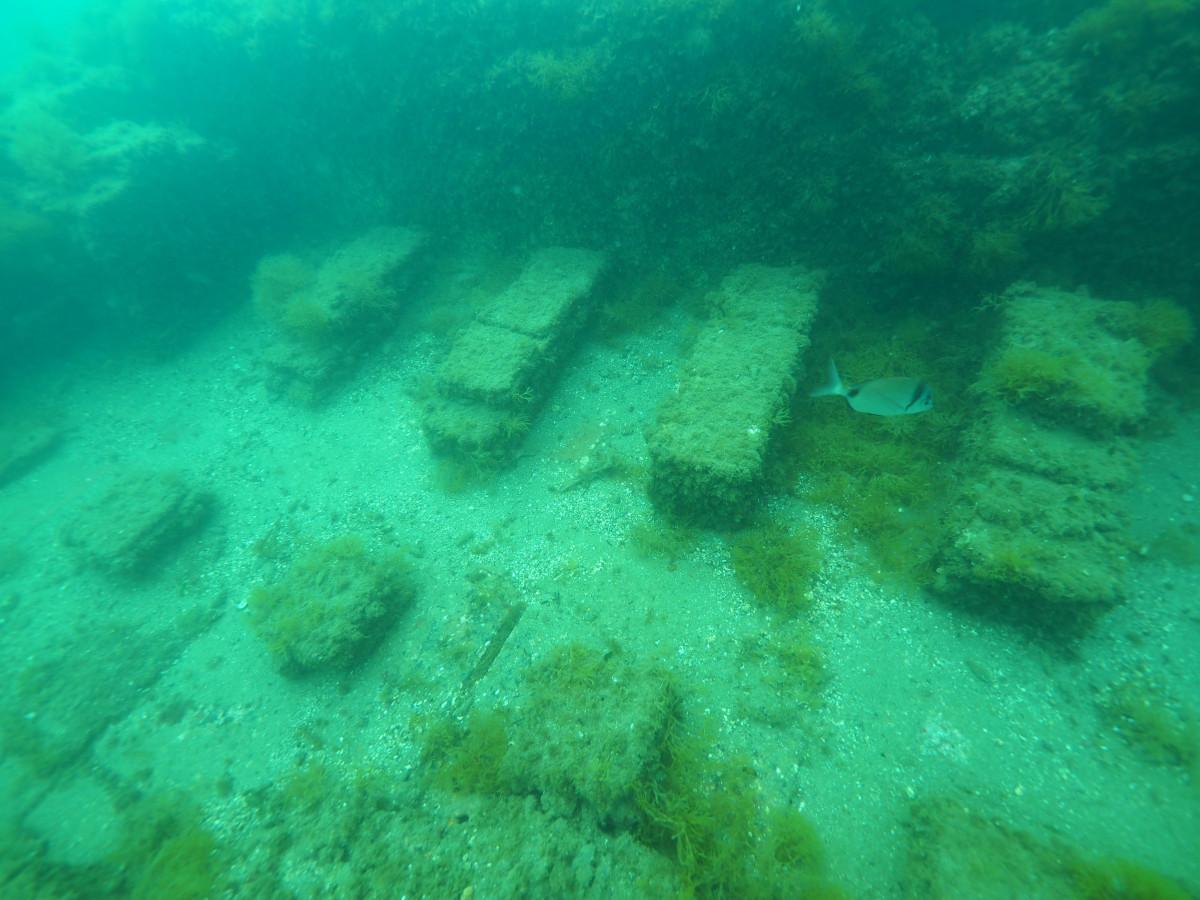 All that is left now are remnants of the walls and foundations, but you can still make out the rectangular shape of the main room, with a semi-circular apsis at the bottom and four niches on the long sides. This monstrous slab of marble flooring had two semi-circles worn into it, and the dive guide had asked us before to look for this and try to work out what had caused it. Seeing it firsthand, it became obvious that this was the grand entrance, and the semi-circles were caused by wear-and-tear from massive doors opening and closing.

There are a vast array of statues in and around the villa, some upright, some laying prone on the seabed, with others jauntily poking up out of the sand. Some represent part of the family of the Emperor – his mother Antonia Minore, with a child between her arms representing maternity, and his daughter Octavia Claudia. 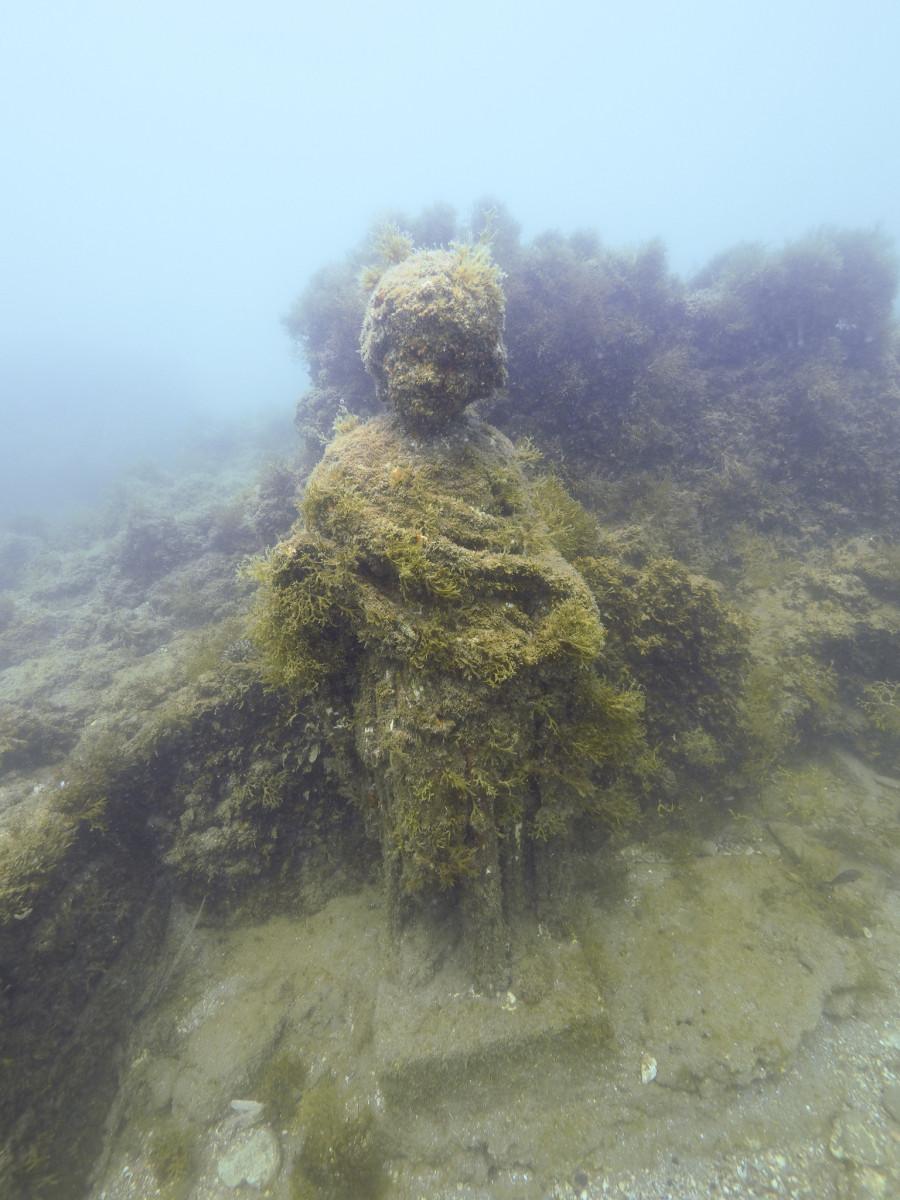 The other statues highlight the luxurious purpose of the room – two of them represent Bacchus, the Roman god of wine and wild animals; while a scene from Homer’s epic Odyssey is represented by the statues of Ulysses and Baios offering wine to the cyclops Polyphemus as they plan to escape from his cave. These stone ‘heroes’ were the first two statues discovered in Baia, but the statue of the cruel one-eyed giant they were scheming against is still missing.

After visiting the Nymphaeum, the dive continued along the extraordinary Herculanea road to an ancient Roman baths. Once upon a time this mighty road led to Portus Julius, one of Rome’s most-important harbours. It was commissioned into existence in 37 BC by the acclaimed military leader and engineer Agrippa, and the remains of docks, cisterns and repair workshops can still be seen.

I am always intrigued by unusual dive sites, and the underwater archaeological park of Baia certainly ticks all the boxes. As divers, we are among a relative few who are able to explore beneath the surface of the sea and see the marine life and underwater topography that awaits us, but at Baia, our submerged exploits allow us a window into the past, back to a time when Rome ruled the world, and this amazing city was one of the first seaside getaways.

The relics are in fantastic condition given how long they have been underwater, especially the carefully hidden and protected mosaic floors, and I feel honoured to have paid Baia a visit – it is truly an amazing dive site and one that will remain with me forever.