Introducing the Our World-Underwater 2022 Scholars 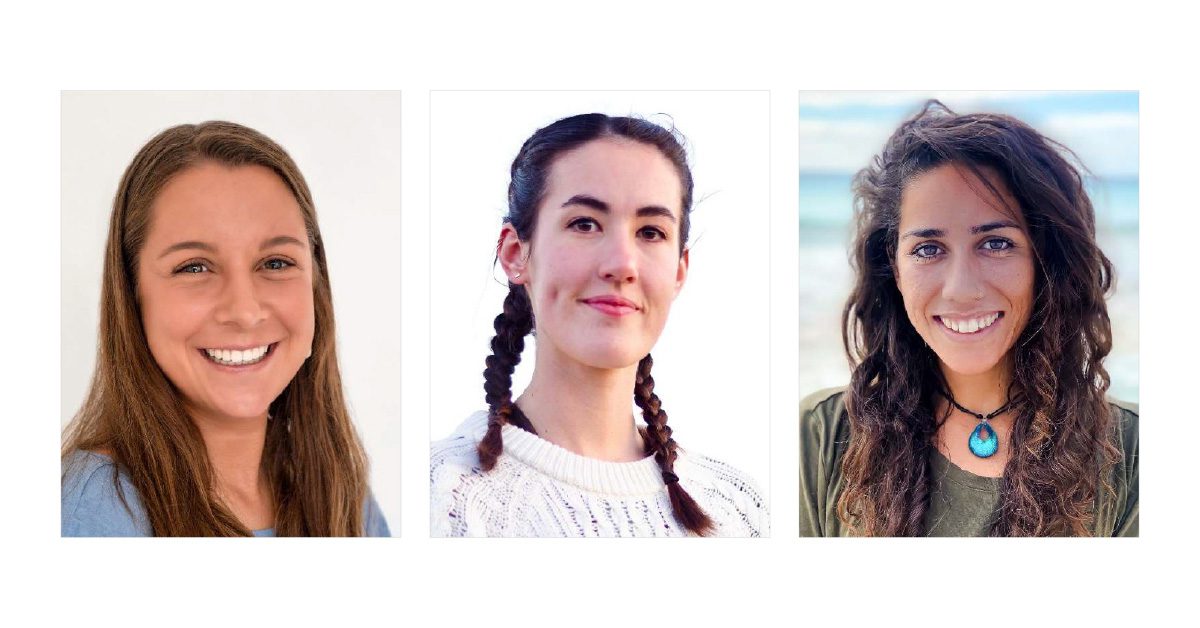 Since 1974, the Our World-Underwater Scholarship Society has provided first-hand experiences in underwater-related disciplines to young people considering careers in the underwater world, and each year, the Society selects three Scholars – one each from North America, Europe, and Australasia.

As long-time readers of Scuba Diver will know, as we follow the UK Our World-Underwater Scholar via their blog, each Scholar, working closely with leaders in the marine-related fields, spends a year immersed in a wide variety of hands-on activities that further the Scholar’s knowledge and experience of the underwater realm.

The Our World-Underwater Scholars receive funding for travel and living expenses during their Scholarship year.

The 2022 Scholars of the Our World-Underwater Scholarship Society are:

Rosie Poirier, now 24, was born in Ontario, Canada where she grew up exploring the outdoors. She first discovered marine biology at the age of 13, while completing an assignment for school. She became captivated by the idea of marine science as a
career and focused all her energy on pursuing it. Growing up in a single-parent home of limited means, and far away from any ocean, her dream felt difficult to imagine. Yet, at 15, she was awarded a life-changing scholarship to participate in a three-week marine conservation course in the Caribbean. During that trip, she swam in the ocean for the first time and became immersed in a world of diving and marine science. From there, her love for the oceans only grew.
After graduating from high school, Rosie spent a year focusing on building field skills. She moved to the Bahamas where she worked with several non-profit organizations, conducting field research, doing coral restoration work, and engaging in community education. During that time, she completed her dive instructor training and began teaching diving to students, working for a programme that provided sailing, diving and marine biology liveaboard experiences for high school and middle school students.
Taking time in the field before attending university exposed Rosie to many aspects of the marine field, including the decline of the health of our oceans. The more she learned about the oceans, the more she learned about how they were being negatively impacted by climate change and she was driven to do something about it.
When beginning her undergrad, Rosie focused on marine conservation and learning ways for humans to interact sustainably with their environment. While in university, Rosie embraced every opportunity possible to be in the field. She worked in field research with sharks, whales and salmon populations. In her first year, she worked at a nearby aquarium as an aquarist, learning how to balance microecosystems and to care for marine wildlife.

In her second year, she worked as an underwater photographer for a production company, introducing people to the oceans through imagery. Most recently, she spent four years working for Cetus Research and Conservation Society, focusing on reducing the impact of vessel noise and vessel disturbances to whales in the Salish Sea. With Cetus, Rosie co-ordinated a field programme to monitor boater behaviour around whales in response to marine mammal regulations.
For Rosie, the OWUSS scholarship is a dream opportunity to learn about marine conservation on a global scale. Through this scholarship, she plans to explore the fields of fisheries management, Marine Protected Area (MPA) development, and community engagement. Rosie plans to use the OWUSS scholarship year to gather the most-effective tools she can to pursue a career in ocean conservation.

Hannah Douglas, 23, is an avid scuba diver, Marine Science student and yoga teacher from Wicklow, Ireland with a passion for marine ecology, conservation and effective scientific
communication through art and photography. Making the connection as a child between the ‘mermaid’s purses’ washed up on the shore and the sharks and rays living beneath the waves gave the ocean an enticing mystique.

At 15 years old, she experienced scuba diving for the first time off Dalkey Island, where harbour seals swam by through the kelp fronds and bright orange starfish lay in carpets on the seafloor. Surfacing from this first dive, she felt she had been given the key to an entirely new world, one that she has since always wanted to share with those around her.

After finishing school, Hannah worked to fund more diving courses and completed her Rescue Diver training in Ireland before travelling to Thailand where she became a PADI Divemaster and volunteered planting coral reef nurseries. She then travelled to India and trained as a yoga teacher, learning mindfulness practices that she continues to incorporate into her diving.
Returning to Ireland, she began an undergraduate degree in Marine Science at the National University of Ireland, Galway, where in her first year she restarted the Marine Society, helping to organise weekly beach cleans with fellow students, hosting talks by marine scientists and fundraising events for marine conservation charities like Seal Rescue Ireland. In this leadership role, Hannah learned the importance and benefit of communication and teamwork to tackle large problems. She also found joy in taking effective action and discovered how it could bring a sense of relief to students who felt overwhelmed by the scale of the environmental crisis.

During the summer of 2021, Hannah was selected to work as a Communications Content Creator for the Marine Institute of Ireland. In this role, she combined her love of art and Marine Science by taking underwater photos and sketching Irish native marine species.
Despite the constraints of the pandemic, by the age of 22, Hannah had accomplished a PADI Open Water Scuba Instructor qualification and started teaching courses. She also trained as a NAUI Scientific Diver and subsequently worked on multiple scientific field research projects, including her own research project focused on Pachycerianthus multiplicatus (Fireworks anemones) on the west coast of Ireland.

Her objectives after university are to continue studying life in the ocean while
broadening her knowledge of economics and politics by delving into the world of resource
management and legislation.
She holds the firm belief that you should, ‘Be the change you wish to see’, and for Hannah, that is a global awakening to the beauty of our oceans and a wave of policy change to protect it.

An upbringing filled with adventure has given Amelia Mannering the opportunity to explore some of New Zealand’s most-remote coastal and alpine areas. From a young age, the enchanting marine world captivated her.
Millie’s fascination began with the discovery of alien-like species in shallow rock pools and the excitement and curiosity to understand the underwater world has only continued to grow.
At 17, Millie enrolled in a Bachelor of Science in Zoology and Marine Science programme at the University of Otago, New Zealand. As Millie studied and learnt to dive, her desire to protect the marine environment and its inhabitants was ignited. She has investigated the effect of anthropogenic activity on marine ecosystems through bioacoustics research at Leigh Marine Laboratory, as well as oceanographic research in Doubtful Sound, Fiordland. Millie also was a volunteer for the Department of Conservation on various conservation projects on predator-free islands surrounding the mainland of New Zealand.
In 2018, Millie was selected as a BLAKE Ambassador to sail on board the research schooner, Tara, from Panama to New York as part of an expedition led by the Tara Oceans Foundation. During this voyage, she worked with an international collaboration of scientists to conduct ocean biodiversity research. Greatly disturbed by the extent of plastic pollution she witnessed, her drive to protect our oceans was reinforced.
Millie pursued a Master of Science (Marine Science) degree at the University of Otago with field work based at the Lizard Island Research Station, Great Barrier Reef. Her research examined the impact of microplastic exposure on predator-prey interactions of coral reef fish. Based on her academic merit and research potential, she was awarded a University of Otago Master’s Research Scholarship as well as the John Jillett Prize for the best thesis proposal.

In 2020, Millie represented New Zealand through her selection as a delegate on the 32nd
Ship for World Youth Programme. While sailing aboard the Nippon Maru from Japan to Mexico, she fostered her leadership capability and gained a global perspective on environmental issues and solutions.
Millie has recently completed her MSc whilst working as a research assistant at the University of Otago. Millie has enjoyed gaining more diving experience whilst also training to obtain her Scientific Diver qualification and preparing research manuscripts for publication. Millie was originally selected as the 2021 Australasian Scholar, however due to COVID-related travel restrictions in the region during the early part of her scholarship, the decision was made to defer her scholarship until 2022.
During her deferment, Millie has been working as a scientific diver in a range of projects throughout New Zealand, including for the University of Otago and the Department of Conservation. A highlight for her has been working in remote areas, such as Fiordland, where she monitors and controls the spread of the invasive seaweed, Undaria pinnatifida. Millie also joined an expedition to the Subantarctic Islands of New Zealand as the Heritage Expeditions True Young Explorer. She aims to help raise the profile of the islands, advocate for the protection of the threatened species that inhabit them, as well as other wild places across the planet. This is a focus Millie is looking forward to pursuing throughout her upcoming year as the 2022 Australasian Scholar.