The moment a snorkeler was protected from a nearby tiger shark by a 50,000-pound humpback whale has been caught on video.

The moment a snorkeler was protected from a nearby tiger shark by a 50,000-pound humpback whale has been caught on video.

According to the Daily Mail online, the footage of 63-year-old whale biologist Nan Hauser was taken off Muri Beach, Rarotonga, of the Cook Islands in October.

The video below shows the moments that Hauser and her team were guided to safety by the whale as he used his head and mouth to steer them.

The whale tried to tuck Hauser under its pectoral fin and lift the biologist out of the water, guiding her into a certain direction out of harm’s way from a nearby 15-foot tiger shark, the biologist said.

Though the shark is only visible in the distance in the footage, Nan surfaces and tells her team on board the boat that there is a shark nearby.

Nan Hauser told The Daily Mail that the incident is ‘proof of the whale’s intuitive nature to protect other species of animal – including humans – something she believes has never been captured on film.’

When Hauser first spotted the shark she initially thought that it was another whale – until she saw its tail moving from side to side instead of up and down, like a whale. 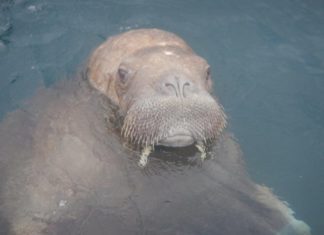