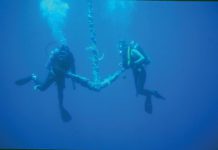 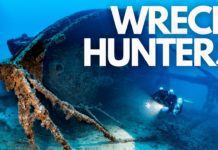 Getting out of the library 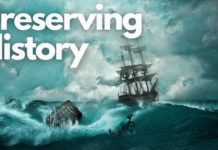 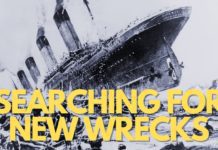 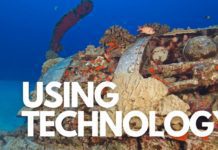 Check out the Wreck Hunters website for more details of the exciting project in Utila and the courses on offer.

I'm here today on the deck of the SS Great Britain Brunel's splendid steamship. She sits today in the dry dock from which she was launched in 1843 and after a long career she ended up abandoned in the Falkland's in 1937, but in 1970 a project was put together and she was returned to her home and then lovingly restored, so you can see the fantastic vessel she is now and I want to use the SS Great Britain as an example.

Imagine if you will that she is cutting through the waves at 10 knots her normal cruising speed but suddenly hits a rock, the hull is breached, water gushes in, the pumps are overwhelmed, the boilers fall silent, the ship starts to sink, the order abandon ship is given and she goes to the depths.

She settles, her mass collapse, over time, mud, shingle, sand, shroud her and then one day you find her. It is your job to record the remains of this once great vessel, how are you going to do that.

Here we are at the riggers yard of this is SS Great Britain, home to the main mast of that fantastic vessel, the master was put up in 1857 and now arrests here again today and where better as a backdrop to talk about our topic which is underwater excavation.

My name is Mike Hague, I'm the product director of an operation in the Caribbean called Rec Hunters where we teach the skills and techniques of diving archaeology, based on the tiny island of utila, focused on 18th century rec we call the Oliver. I'll be running a series of presentations, as I said the one we're going on today is underwater excavation. Remembering always the things we talk about often the complex, all require risk assessment and require proper training.

I've spoken during this series a few times about how diving archaeologists had greater challenges than their land counterparts. In excavation, it could be argued that the reverse is true, unless they have taken some classes in advance levitation, most land archaeologists can't fly over their sites, diving architectures can, there are some more practical advantages too.

A while ago i worked as a site supervisor on the Bristol waterfront excavations, digging up medieval Bristol and one of the famous sites i worked on was what was called canning's house, a house built by a successful Bristol merchant who lived from 1399 to 1474, trading in tin, lead, fish and cloth and for his endeavors, he became a great patron of the building of bristol and also created his own property right on the banks of the Avon.

To get to the medieval layers that we were looking at, we had to get through debris and that debris was mainly second world war, an awful lot of bricks, quite a few toilets and just sometimes unexploded ordnance, none of these things tend to be a problem for the diving archaeologist, so before we look at excavation, take a moment to think about how we got in the first place.

We've covered topics such as surveying, such as a recovery of objects and these areas have to be considered before we get to excavation which normally requires a permit in most parts of the world. From your pre-disturbance survey you will have a master plan of how you are going to work on the site and it is a master plan which you will put into place.

The key discipline or principle we are looking at here is stratigraphy, how one layer of the site relates to the other, this is quite difficult to do underwater but it is possible. The mayor oh siteh henry the 8th warship sunk in 1545 tells us this where the remains of the ship could be discerned easily from the attempts at salvage in 19th century and by casual fishing boat, debris which had been landed on the site over the years.

People talk about wrecks as being time capsules, unfortunately they are open capsules and other what we call contamination can get in, hence the need for this very detailed recording that we do as we discussed before everything that comes up has got to be labeled, it's got to be recorded in situ, photographed and videoed if possible and people do wonder why all this detail, well the principle is simple it is going to take you five hours of post excavation work to every one hour of excavation work that goes on, so you need all this data to put the stuff together.

Excavation is destruction, the only justification we have for it is proper recording, we also have to deal with the psychology of the excavator or the diver. We call this the diver in the hole syndrome, the diver normally working reasonably by themselves finds an interesting artifact, their natural inclination is to go on and try and find the thing behind it, this is not what we want, everything has to be recorded in situ and then recovered so hence all this detail, all this precise recording is needed.

There are of course logistics that we need to look into here as well, you need to set up some sort of base, now this can simply be working from inflatables as i've done many times sometimes from a large support vessel and just every so often the construction of a platform or pawn too, often you need to set up a grid around the site, a robust grid which allows the divers to lean on this grid without damaging the wreck itself, when working to excavate the remains, then of course we have powered tools things like airlifts and we have to have compressors to run these things, so there's quite a lot of logistics that go into this and on top of all of this we need to superimpose the safe diving practices that needs to go hand in hand with all diving under water and especially diving with a purpose.

So, a word perhaps about the tools you are going to use when you excavate the sights, most excavation quite frankly is done with very low tech gear, hand fan tools that you would find in a garden shed, do an awful lot of the work sometimes. When there is more debris than normal over a site, we need to use more powerful tools and the three that spring to mind are the airlift, the water dredge and the prop wash.

All divers are aware as their exhaust bubbles come out of their regulator, they rise and appear to get bigger and move faster, if these bubbles were put into a tube and there are enough bubbles going up the tube this will create suction and would suck up water and anything in it this is exactly how an airlift works, compressed air is pumped down, the air rises from a high pressure to a low pressure situation, sucking up the water and anything that's in it and allows you by hand fanning to clear away the sight but you should do carefully trying to avoid getting any material you don't want to achieve.

To go there most alias have some sort of bucket at the end to catch stuff so we shouldn't have gone there in the first place, the problem with the air lift is it only works really well below 10 meters because the pressure gradient is big enough, so then we go instead to the water dredge, this is a contraption first used by Canadian prospectors, some of you who do physics or chemistry at school recall the Ventura principle where you put a venturi valve on the end of a tap, turned on and created suction, this is exactly how a water dredge works and can work very effectively at very shallow depths.

The third method is not really much used in archaeology the prop wash was invented by treasure hunters mainly off Florida for removing large amounts of sand. You put a tube over the propeller right angles and you blast holes in the bottom, hoping to find something.

On the wreck of the atoshia, the site looked more like a bombing site from the second world war than any sort of archaeological site. Used properly prop washes can be valuable, used incorrectly they do untold damage so it's something we use with great caution.

Looking at diving excavation from a diver's point of view there are a couple of practicalities we need to think about.

The first is weighing how much weight are you going to carry, you'll find yourself often working at very shallow depths. We're often very deep depths and so you need to pay great attention to your weight

The other fact is you're not moving very much, normally it's going to get cold quicker you seem to need greater thermal insulation which tends to need more weight, the diving digger will spend an awful lot of time in close proximity to the bottom so don't skimp on your weight or you might find a few problems.

All of this sounds vastly complicated perhaps, but it can be done and it can be done well and the thrill and excitement of discovery and the sense of a job well done should not be abandoned just because it's a harder thing to do.

All of this might sound like a vast array of regulations rules and procedures and perhaps it is but these can be mastered and underwater escalation can be done and done well, don't give up on the thrill of discovery and the sense of achievement, when it has been done well.

We are lucky on the oliver site in some ways that the treasure hunters of the 1970s by working on the site and therefore disturbing it gifted us an underwater classroom to teach our skills, next time we're going to look at methods that can be used for locating ancient wrecks until then I wish you all safe and enjoyable diving