One of the newer items that the scuba industry has adopted is ponchos. Much like a hat, protecting yourself from the elements between dives is important and can help prevent decompression complications as well.

Apeks has been a firm favourite with British divers for over 40 years, and the ATX40 is the UK company’s solid entry-level unit. Like the XTX50, it is best described as utilitarian in the looks department. However, like its mid-priced sibling, it is well equipped with everything a UK diver could want, including an environmentally sealed first stage, large purge button, chunky venturi lever, four low-pressure ports, and two high-pressure ports.

Following on from the Group Test triumph of the MTX-R and the XTX50, the Apeks ATX40 made it a tidy trio of Choice awards for the Blackburn-based company. Look past the rather-dated second stage aesthetics, and there is simply no faulting the pedigree of this reg, which breathed smoothly in all positions, and would not freeflow whatever we tried. The Comfo-Bite mouthpiece received praise, as did the large and accessible venturi control, which did actually make a difference to the breathe. The Test Team also singled out the exhaust tee for the thumbs up, as it efficiently directed bubbles away from your face on exhalation. And what a great price!

Verdict
Efficient, smooth and functional, though hampered a little by its looks. Another great regulator from Blackburn-based Apeks.

Mares have never been afraid to try things a little out of the ordinary – just look at the top-of-the-line Fusion 52x and its motorcycle-throttle-like venturi control! So that is why I was not surprised to see a Mares logo on the Loop, with its bizarrely routed hose. Regs tend to be either right or left, this one, the hose protrudes from the bottom of the reg between the vents of the exhaust! While this obviously has an impact on its use as an everyday regulator – it can be used ‘under the arm’ style – it does make it perfect as a stage cylinder reg, and when stowed sits nicely at the top of the cylinder. It also means you don’t have to deploy the full length of hose to be able to use it. It is teamed up with a compact balanced diaphragm first stage.

The Loop gave a nice, smooth breathe in all positions. The mouthpiece is comfortable, the purge works well and there are no controls to fiddle with, it just works well out of the box. As we said above, although you can route the hose under your arm, not sure how many will, but on a stage it is perfect. Good to see Mares trying something new.

Verdict
Bravo to Mares for trying something different. Not sure how it will sell as a normal reg, but it will make a damn fine stage set. 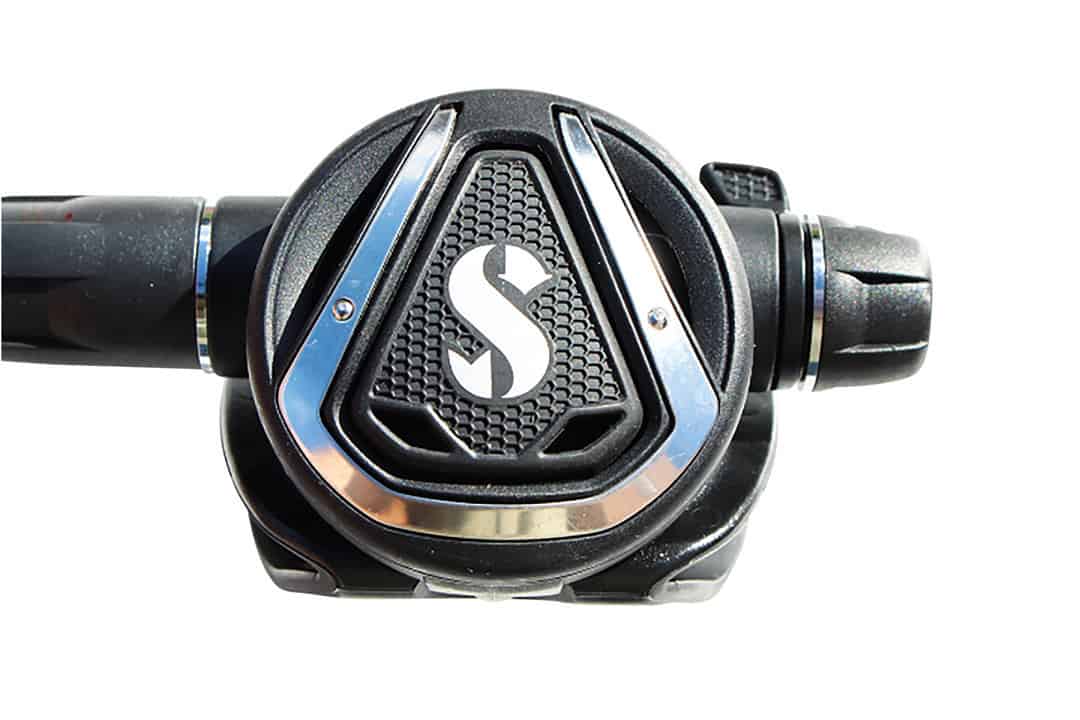 The amalgamation of the Scubapro and SubGear brands is nowhere more welcome than in the budget regulator category, as the tried-and-tested Scubapro MK11 is team up with the C350 second stage, which is heavily based on SubGear’s former top-of-the-range regulator.

It comes with a balance diaphragm environmentally sealed first stage, cracking resistance control (the only one in this price bracket), venturi lever, large triangular purge button, four low-pressure ports (though two are classed as high-flow) and two high-pressure ports.

The Test Team all thought that the C350 was the most-pleasing to the eye of the three test subjects in this price bracket, with the metal insert around the unusually shaped purge button providing some welcome bling. The purge is powerful, though the triangular button does need a fairly firm press, and the venturi and cracking resistance controls are large, easy to use even with gloves and work so well you can dial down the breathe to almost zero. The performance was dry in all positions and a good breathe, and the mouthpiece was comfortable. That wallet-friendly price is also well worth mentioning.

Verdict
Overall decent regulator from Scubapro, with eye-catching looks and a reasonable breathe at a very good price.

It was a shame we had no regs from Hollis, Oceanic or Sherwood, as without them this was quite a small ‘group test’, but what we did get was a truly mixed bag, but all with good performances considering these are entry-level units.

The Mares Loop is an oddity, but is sure to find favour with those looking for a nifty stage reg, for which is it entirely suited.

That left the Apeks and the Scubapro. Both breathed well, were built to last, and came in at a cracking price. The superior performance of the Apeks nailed it the Choice award, but the flashy looks of the Scubapro got it the Best Value – it does look a more expensive regulator with the metal insert on the second stage.