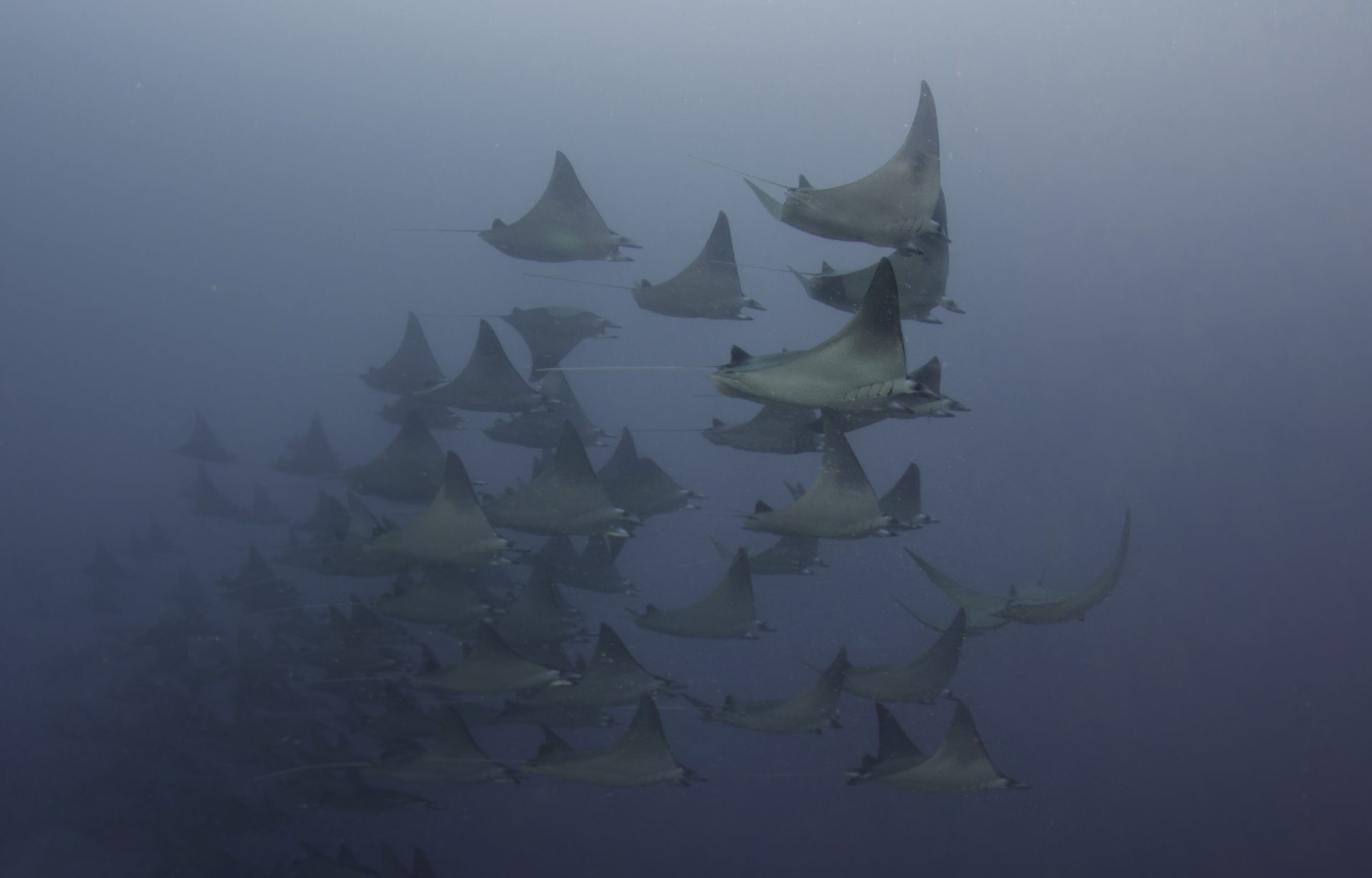 The shortfin devil ray, listed as Endangered on the International Union for the Conservation of Nature (IUCN) Red List, is a rare sight in our world’s oceans.

Yet divers and scientists have worked together to document groups of the rays at Pulau Si Amil, right off the coast of Sabah. This occurrence has now been published in the prestigious journal Pacific Conservation Biology, formally recording the presence of the species and highlighting Sabah as an area of interest for shark and ray researchers.

“We are so happy that Sabah has once again been noted for the occurrence of rare marine animals,” said David McCann, lead author of the paper. “It was incredible to witness this first hand, an amazing experience for all of the divers with us. There aren’t  many divers in the world who have had an experience like this.”

As close relatives of manta rays, devil rays are less commonly seen by divers underwater, due to their elusive behaviour and, normally, more pelagic nature. However, they are noted for swimming together in aggregations known as fevers, which can number in the hundreds. The shortfin devilray (Mobula kuhlii) is one of the smaller species of devil ray, with a wingspan of only 135cm max – shorter than an average door.

At Si Amil, the rays were first seen by recreational divers with Scuba Junkie, the award-winning PADI 5* IDC centre. Encouraged by this, the dive professionals adjusted their approach to diving the site and were rewarded by regular sightings of devil rays, including some amazing and remarkable schooling behaviour – up to one hundred rays at a time, as well as the occasional manta ray and even the deep sea marlin!

The sightings and numbers seen were collated from the divers’ logbooks and passed on to marine biologists at Universiti Malaysia, Sabah (UMS), along with photos and videos of the rays, to further the scientific understanding of their distribution.

Experts identified the rays as the shortfin devil ray (Mobula kuhlii) from photographs and video stills, with spectacular video footage showing the schools of devil rays from a diver’s viewpoint.

“The presence of devil rays at Si Amil provided a unique opportunity for divers to contribute to citizen science efforts, as well as giving them a most memorable experience.” said Dr Mabel Manjaji Matsumoto, Associate Professor at Borneo Marine Research Institute, Universiti Malaysia Sabah (UMS). “The video footage and numbers collected were invaluable for our records, and were used to produce the scientific paper, and set the baseline for further studies in this area.”

“Currently, it is not known why the devil rays school at Si Amil, or for what they use the area. Schooling behaviour is normally associated with safety, reproduction, socialising, cleaning or feeding. It could be a combination of these drivers too. It would be fantastic to carry out research in the area to find out more.” Said Dr Gonzalo Araujo from Marine Research and Conservation Foundation. “From a threatened and little-known species perspective, Si Amil is definitely an area of interest.”

Dr Mabel continued with caution, “Although it is exciting to see the devil rays schooling in these numbers, it is also poses a concern. The species is not protected by law, and neither is the area in which they were seen. This, coupled with their schooling behaviour, leaves them very exposed to overfishing – especially from large-scale commercial fishing practices. Devil rays, like many other sharks and rays, do not produce many offspring – normally one pup per litter – and catching them in large numbers would be catastrophic for a species already under threat.”

“It is prudent that protection is given to either this area or to the species, and preferably to both.” David McCann added.  “Manta rays, for example, are already protected by law in Malaysia. Protection is necessary following the globally recognised ‘precautionary principle’ – and would ensure these rays are in Sabah in perpetuity – enabling further investigation to determine how and why this devil ray species uses this area, as well as enable the authorities to explore potential future revenue streams from responsible dive tourism.”

The publication states that further research would also enable the development of effective management plans to conserve the species and local population of rays. Given the high value of tourism that sharks and rays bring to Sabah – estimated at US$10 million annually in a previous scientific study – conservation of these species is important for biodiversity and livelihoods alike.

“The expansion of Marine Protected Areas (MPAs) or creation of a Locally Managed Marine Area (LMMA) could be explored to both facilitate protection of these species and make the most of this incredible spectacle through tourism, much like how Pulau Sipadan Marine Park is a world-renowned tourist attraction.” Dr Mabel suggested.

McCann summed up, “In any case it is a fantastic example, yet again, of the incredible marine biodiversity of Sabah’s waters, particularly the Semporna region. The area is already world-renowned for spectacular diving and what can be found here – these sightings show that there may yet be more to be found and reported. Hopefully appropriate measures will be taken to protect these incredible animals and their habitat.”