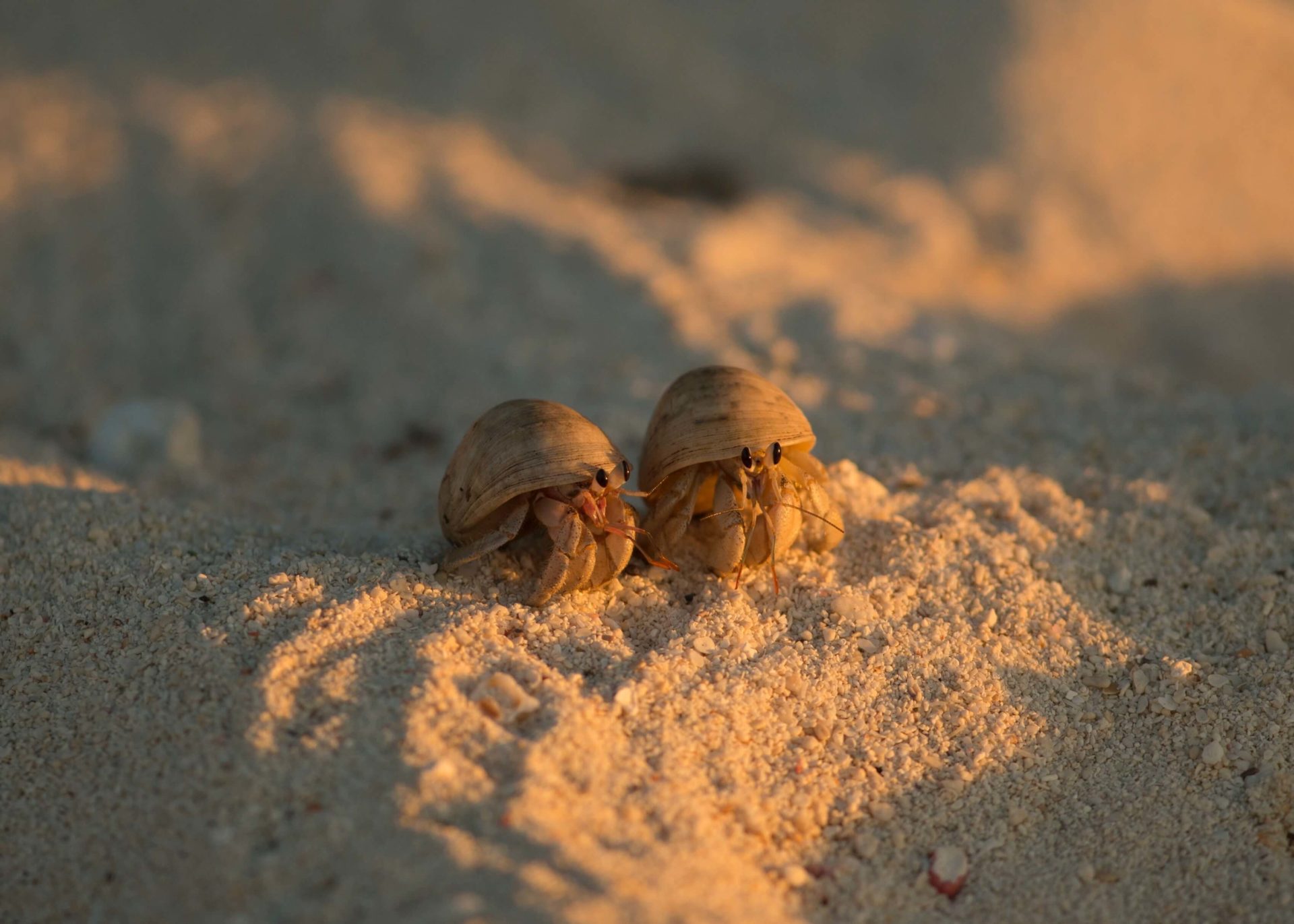 Known for its incredible marine biodiversity, it is therefore no surprise that the setting of the sun brings the most interesting creatures out to play in the Coral Triangle. One such ‘creature of the night’ that makes its home in Raja Ampat, Indonesia, is the intriguing hermit crab.

Hermit crabs, while not uncommon globally with over 800 known species, come in all different shapes and sizes. These unique crabs can be divided into two main groups, marine and terrestrial hermit crabs.

Marine hermit crabs are generally found in shallow reefs and shorelines, though on occasion are seen in deeper waters, and will spend most of their lives never leaving the water. These species are often observed hiding away in their “mobile homes” during the day, easily mistaken for shells or pieces of coral, thus staying safe and going unnoticed awaiting the fall of darkness.

Most marine hermit crabs make use of mobile shells for protection and camouflage, though a very small number of marine hermit crab species use immobile structures such as coral growth or sponges. One common behaviour shared, is the hunt for a larger and more comfortable home.

As hermit crabs grow, they go through moulting periods (as many other crustaceans do) where they shed their exoskeleton to accommodate a growth spurt, before a new exoskeleton is formed. Hermit crabs differ with other crustaceans, as their exoskeletons are not strong enough to fully protect them from predatorial attacks. They have soft curved abdomens that leave them vulnerable when they’re not inside their reclaimed homes.

Marine hermit crabs are masters of disguise and opportunity. Many species have a symbiotic relationship with anemone. These crabs attach anemone to their shells and, in some cases, are even known to transfer the same anemone to a new shell when they relocate. These anemones provide protection to the crabs, who will often place the anemones on weak spots or openings in their shells.

Anemones have stinging tentacles that keep potential predators at bay. The anemones benefit from this relationship, by feeding from the scraps of the crabs’ meals and a free ride to other food sources. These crabs are even known to carry amphipods, or flatworms, on their shells to help with cleaning duties. The hermit crab shell is a home to many.

During the day these crabs are usually found hiding in plain sight, and only eager patient eyes will spot these masters of disguise. Divers have often mistaken a discarded shell or patch of coral to be empty, only to be surprised by legs and claws suddenly appearing. While it is not common for these crabs to be active during the day, they are scavengers and will not hesitate to capitalise on an easy meal. Hermit crabs are omnivores, and their habitat and size will directly influence their diet, which varies from plankton, other crabs and even dead fish or squid.

The reef systems of the Coral Triangle come to life when the sun goes down. Small areas of coral turn into a mass of movement, and action, for many species who hide in plain sight during the day, including the hermit crab.

During the night it is incredible to observe these fascinating creatures emerging from their hiding places in the coral or sponge gardens or moving their shells to a new hiding place among the similarly coloured and textured reef. Occasionally, if you are lucky, you might witness the relocation of a hermit crab to a new shell, though this requires tremendous luck. These interesting creatures are truly a highlight to observe on any night dive.

While marine hermit crabs can spend their entire lives disguised in coral reefs, their terrestrial family members spend most of their time on firm ground. This is possible by their specialised gills, that only need to stay damp with either fresh or salt water to facilitate survival.

Therefore, the tropics are the ideal habitat for these crabs. The humid climate of areas such as Raja Ampat, provide the perfect habitat for terrestrial hermit crabs such as the Indos Crab. These terrestrial crabs are generally larger than their marine cousins. While marine hermit crabs use their claimed shells for protection and camouflage to survive, their terrestrial counterparts have more hardened exoskeletons and make use of their moving homes to store water in especially during migration seasons.

This water helps keep their gills damp on land. Where marine hermit crabs also make use of their shells for protection during the moulting process, terrestrial hermit crabs will burrow below ground until their exoskeleton has hardened enough.

Human expansion and pollution have led to the habitats of these crabs drastically shrinking and changing. It has now become common to see tin cans and other trash being used by the crabs as shells. The terrestrial crabs also have an omnivore diet but will always favour fish and other meat if available, but it is not uncommon to see these crabs snacking on tropical fruit that has fallen to the ground. These crabs are also mostly nocturnal and are known to have given many a fright, when they see a soup can slowly making its way down a tree or path.

Areas like the rich ecosystems of the Raja Ampat islands, allow travellers to see these fascinating creatures up close and personal, both above and below the water. Many of the popular dive sites in this area are near islands that are host to the terrestrial crabs, making it possible to see both hermit crabs on a single trip, to a picture-perfect tropical island in this breath-taking region.