Face-to-Face: Up Close to Mother Nature by Al Hornsby 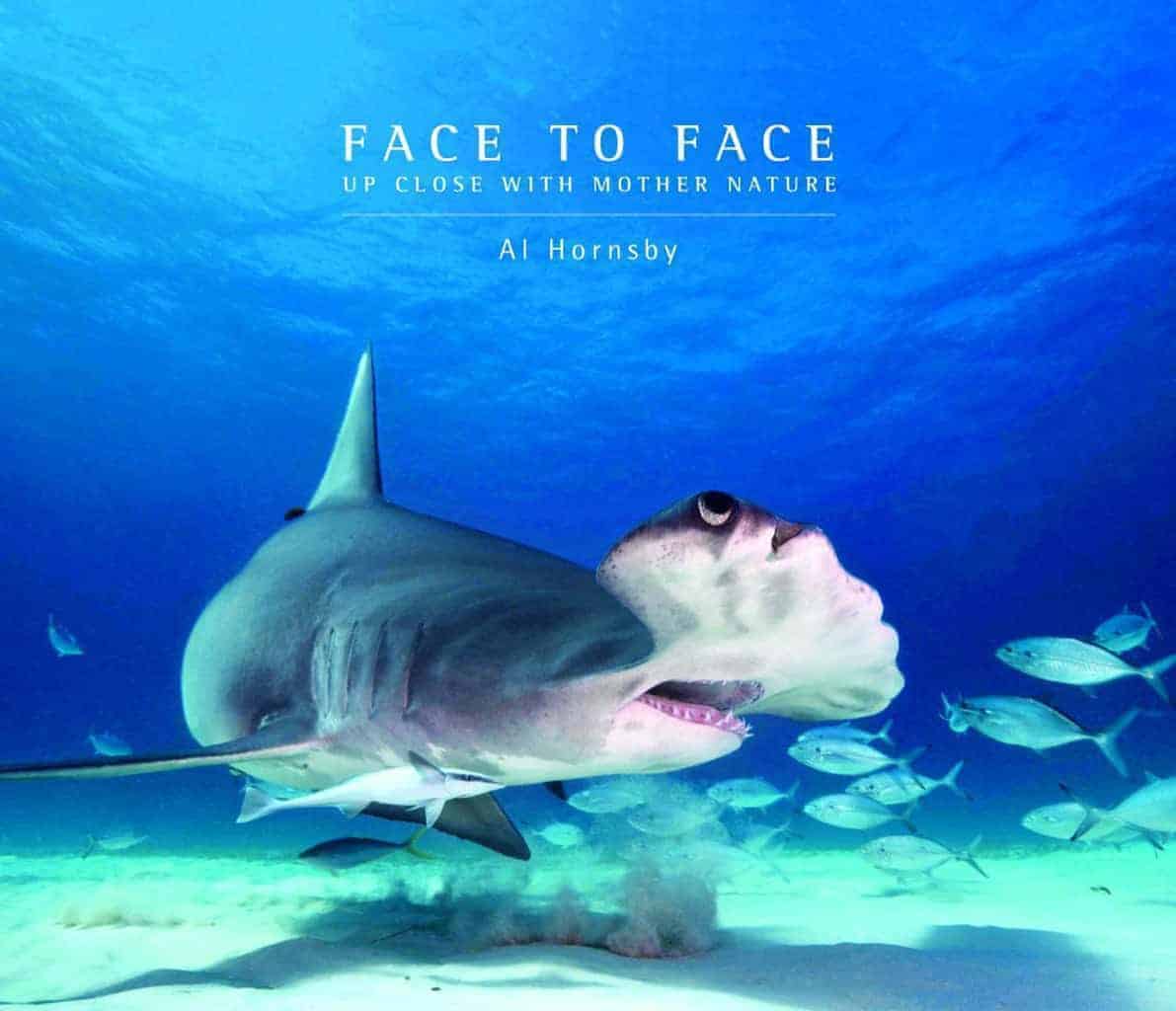 Scuba Diver’s southeast Asia specialist and regular contributor Al Hornsby has been on the promotion trail for his new book, Face to Face: Up Close to Mother Nature, and he did a Q&A interview for the PADI blog with guest blogger Jo Walters.

Join Al Hornsby for an anthology of poignant, thrilling encounters with wildlife, below and beyond the waves, in his new book, Face to Face: Up Close to Mother Nature. It’s story-telling of both heart-stopping adventure and ethereal, natural beauty, where Al’s powerful prose and photography take you to wild, lovely places for encounters with some of our planet’s most-magnificent creatures. I sat down with Al to talk about the book and gathered new insights into a true advocate for wildlife and his many adventures

Q: Let’s start with diving. When did you get interested in diving?

A: I discovered the ocean at age 12, when we moved to the Western Pacific island of Guam, first as a freediver then learning to scuba dive the following year. From day one, it was the most-incredible thing I had ever experienced, and it set me to pursuing a dream of a career in diving from that point forward.

Q: What was your path to realizing your dream of becoming a full-time dive professional, and underwater writer and photographer?

A: Having decided that I wanted to ‘be a diver’, I eventually had to ask myself: “Okay, so what, exactly, does one do when being a diver?” Back then, the industry was small, and there was no established pathway. However, it seemed to me that the underwater photographers, writers and film-makers were the people sharing the most about the wonders of the underwater world, and also were the men and women who were first talking about the need to respect and admire the ocean’s big animals, especially the ‘dangerous’ ones, like sharks. (And, besides, it was also clear to me that they were having more fun than anybody on the planet!) So, I decided to take that path. I continued to dive, and purchased my very first camera – a cheap, underwater point-and-shoot in a flimsy, plastic case. I practiced my photography and worked on my writing skills, eventually becoming a freelance writer and photographer, both topside and below. Over time, I became involved in shooting car racing, rock and roll concert tours, posters and anything else I could get a chance to try. Nevertheless, my real interests – diving and the ocean – kept me diving and making underwater images.

Then, a couple years after university, I packed up my cameras and dive gear and headed to Los Angeles to try to find the dive industry. I became an instructor and worked in a dive store, continuing to take pictures and write magazine articles. In 1977, I got an interview with a (then) small company called PADI, where I’ve now spent 35 years. I’ve had incredible opportunities there, being involved in the development of many of PADI’s backbone programmes. Especially fulfilling, however, was being one of the founders of Project AWARE, and its managing executive for its first nine years.

Along the way, during a hiatus from PADI, I also had the opportunity to spend a dive-intensive four years as editorial director (and later, group publisher) of Skin Diver Magazine. 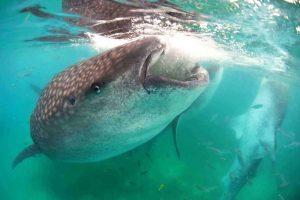 Q: How did this book come about?

A: Throughout my diving life, I’ve travelled, taken pictures and written articles for various magazines. The result was not only a substantial library of published written and photographic work, but because what emotionally affected me most were the close encounters with beautiful creatures – especially the big predators. Those images and encounter stories always seemed to best communicate the feelings I had for the natural world. Several years ago, it began to occur to me that there was a longer story, here… a book, made up of my best underwater and topside wildlife images and the encounter stories that went with some of the most meaningful. Once I had found a publisher and organised the work, the book was completed fairly quickly over evenings and weekends last year.

Q: The book includes extraordinary encounters with apex predators. Do you have any favourites?

A: A lot of them… the big predators tend to be the most-intelligent and curious of animals, very often completely unafraid of humans – meaning they will sometimes approach more closely than most wild creatures do. And, especially when studied in detail through a camera lens, their beauty, grace and power can be awe-inspiring. For these reasons, most of my favourite encounters in the book tend to be with them. Although it’s impossible for me to choose one, there are several that have always stood out:

A special story would be the mako shark encounter, from 1993, in open-ocean some 15 miles off the coast of southern California. Some 9m down, in a cloud of chum and with the boat having drifted off, my buddy and I were approached and closely studied for 25 excruciating minutes by a huge four-metre female mako shark. She was utterly curious, coming close enough to touch (we didn’t, of course), but never anxious, never aggressive. This encounter was incredible not only because of its rarity and intensity of feeling, but also because the resulting story and images became my first published, big-animal encounter article – kind of what started it all. The entire story is described in the book, and the indelible memory it left behind will always be with me.

Another favourite story is about the week spent photographing Nile crocodiles in the Okavango Delta, Botswana. The full story is in the book and too complex to tell here, but the diving, in cold, one-to-two knot river water with typically one-to-two metre vis, was very technical in nature; not because of using different gas or equipment, but due to the number one rule in croc diving – they feed on silhouettes, so you can never be one. This made mid-channel (away from unseen crocs), simultaneous, straight-to-the-bottom entries, and at dive’s end, on-the-bottom gear removal (fun in the current and while holding a big, double-strobe camera system) and ascents under the boat’s shadow, critical skills that we had to master before the real diving started. And, once you found a four-metre-long croc on the bottom that let you approach? From often less than half a metre away, they are true dinosaurs, seemingly too old for our brains and psyches to really accommodate. My first and most oft-repeated inner thought in these encounters was, “We are a looking at a…what?”

But, then there was also the time I was in the midst of a humpback whale scrum, with two males fighting over a female with her calf; or the three incredible hours with six tiger sharks in a constantly-moving ballet; or the leopard; the Komodo dragon; the giant guitarfish; the Indian cobra… people will need to go to the book to see those and a lot of other ones, each very special in its own way. 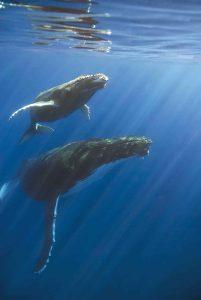 Q: These encounters seem risky. How do you handle the risk?

A: While I have reasonable comfort with understood and carefully considered risk, I don’t involve myself with dangerous, unknown chance. These encounters, and diving in general, along with skiing, motorcycle riding and virtually every other sporting or athletic endeavour – have inherent risks that can never be fully eliminated. What you can (and need to) do, though, is to make sure you have the training, experience and professional guidance necessary to understand the most likely risks and to recognise any signs that the risks may potentially be increasing – and what to do should this occur. Encounters with sharks and bears (especially professionally guided tours), and even crocodiles when practiced correctly, have proven themselves to be extremely safe. If your educated judgement allows you to proceed with a risk activity, then constant awareness is still required, being cognizant of any tell-tale signs of increasing risk or unpredictability. As an example, I am experienced with sharks and bears (a dipped-shoulder, sidelong-stare; a rising of the hair; and an open-mouthed ‘woofing’ of air through an opened mouth – to smell you better – could all be evidence of a bear’s increasing discomfort, which need to be noticed and responded to at the very subtle stages). On the other hand, I know that there are some photographers who (apparently safely) closely approach lions, on-foot. However, since I have little experience with them, and especially as I do not know what a lion’s subtle signs of stress and aggression are, I simply wouldn’t even consider trying it myself.

Q: The cover photo is really extraordinary. How did that come about?

A: Thank you… I took a special trip to the Bahamas, solely in the hope of capturing a cover photo. Despite the effects of a huge, winter storm on the US East Coast that limited me to one day of diving, the hammerheads were amazing, and I got the shots I needed. 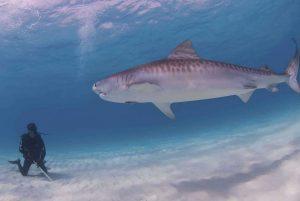 Q: There are several pictures taken by your daughter in the dedication of the book. Is she following in your footsteps?

A: At ten years old, Juliet is a blossoming wildlife photographer in her own right. In fact, she’s already been published in two different hard-cover, photographic collections. I find so much joy in showing her the natural world; she’s also my snorkelling buddy (and freediving model) – it’s like I’m seeing everything all over again, for the first time.

Q: Is there a message you want to convey through this book?

A: Aside from sharing the incredible beauty and experiences to be found in nature and the need for us all to help preserve the environment, I also hope to convey, in particular, that the big carnivores are not the fearsome, blood-thirsty man-eaters that they’re made out to be. They are, instead, curious, majestic and beautiful, and they play such critical roles in the ecosystems they inhabit. They help keep the other species around them strong and healthy, and help keep the environment itself in balance.  And, especially because of the fear and misunderstanding they face from humans, even more than most other animals, they so badly need our appreciation, our respect and our protection. 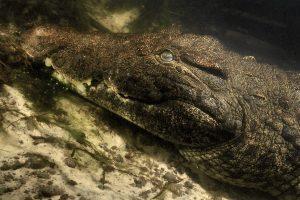 “These breathtaking pictures will give you the insatiable desire to discover, to experience, to understand. They will transport you on an adventure of discovery…” Excerpt from the forward of the book, written by Jean-Michel Cousteau, son of the late Jacques-Yves Cousteau and President of the Ocean Futures Society

You can get a personally signed copy now, at a discount of 10% off the (already discounted) Special Introductory Price. And, in addition, a donation of US$5 will be made by the author to Project AWARE for each book sold. Simply go to the website's shopping cart and enter the promo code: paf

Face to Face: Up Close With Mother Nature