EVERYTHING you need to KNOW about sea turtles

No matter where are you coming to snorkel or dive in Riviera Maya – it´s either Playa del Carmen, Cancun, Tulum or Puerto Aventuras – there is always a very high chance to spot these beautiful wanderers of the sea.

There are seven existing species of sea turtles:

Six of the species are classified in the Family Cheloniidae, only Leatherback comes from its own family Dermochelyidae and it looks very different than others species.

All of them are listed under the Endangered Species Act by by the IUCN (International Union for Conservation of Nature and Natural Resources).

Sea turtles have been around for million of years living in different parts of the world.

They range in size from 1m to 1.2m, depending on the species, and weigh between 65 and 130 kg. The Kemp’s ridley turtle is the smallest, and the leatherback is the largest.

Sea turtles live very long lives, it is believed that their lifespan ranges up to 100 years.

Sea turtles live in tropical and subtropical water of the oceans in warm temperatures. They tend to migrate depending on the season.

The diet of sea turtles depends on many factors such as species, habitat or even the size of their body. While hatchlings, turtles follow rather carnivorous diet that consists of seaweed, fish eggs, pelagic mollusks, jellies, etc. Most of them continue to be carnivorous but green sea turtle completely change its diet preferences by being herbivorous. Other sea turtles such as Hawskbill or Loggerhead adjust their diet according to their psychical features.

All sea turtles lay eggs and they do it usually during the night in order to avoid any dangers or heat. Sea turtles hatch after around 60 days. The incubation time may depend on how warm the nest is. The temperature also can dictate the gender of the turtle. In cooler temperatures more males tend to be born and warmer temperatures facilitate more females to be born. Sea turtles usually lay around 100 eggs at a time, however only one of the eggs survive to adulthood.

As mentioned above, of the seven sea turtle species are classified as vulnerable, endangered or critically endangered. Threats to sea turtles include:

-diseases such as tumor

How you can help? 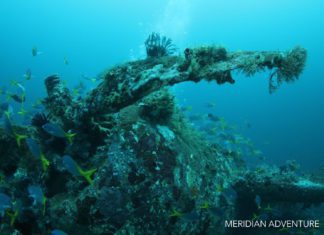 18th April 2021
P47 WW2 Plane Wreck - Raja Ampat Raja Ampat is known as the most diverse ecosystem in the world, with thousands of marine species found...