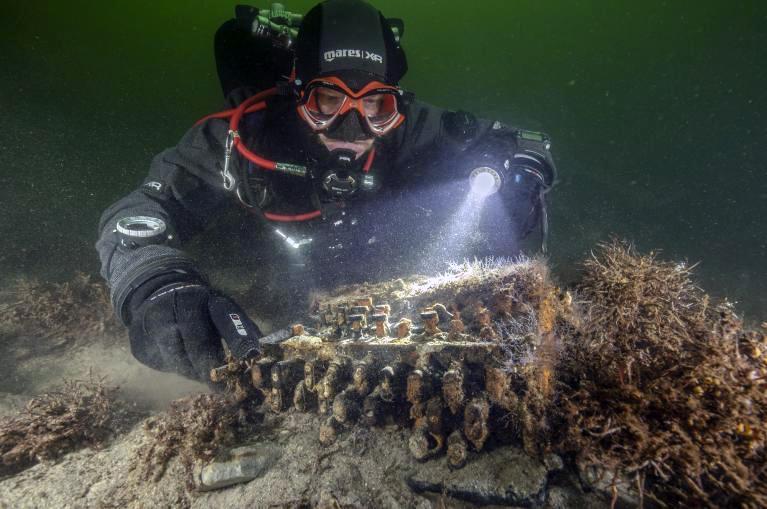 An incredibly rare Enigma machine, which was used by the Nazi military to send and receive secret messages during World War Two, has been found in the Baltic Sea.

A team of German divers from research organization Submaris, who were working to find and remove ghost nets from Gelting Bay on behalf of the WWF, stumbled across the cipher machine tangled up in a fishing net.

It was initially thought to be a typewriter, but team member and underwater archaeologist Florian Huber quickly realized what they had found. He said: “I've made many exciting and strange discoveries in the past 20 years, but I never dreamt that we would one day find one of the legendary enigma machines.”

The enigma machine helped the Nazi forces stay one step ahead of the Allies, until a British team at the codebreaking centre at Bletchley Park, led by Alan Turing, managed to crack the code – an achievement credited with shortening the conflict and saving thousands of lives.

Dr Jann Witt, a historian from the German Naval Association, said he believed the machine, which has three rotors, was thrown overboard from a German warship in the final days of the war.

The Germans sank more than 200 of their submarines in the Baltic Sea at the end of the war, and some assumed it came from one of these, but Dr Witt said it was less likely to have come from a scuttled sub because U-boats used the more-complex four-rotor enigma machines.

Dr Ulf Ickerodt, the head of the state archaeological office in Schleswig-Holstein, said the machine would be restored by experts at the state’s archaeology museum and then go on display in the Museum of Archaeology. It is thought the delicate process, which will include a thorough desalination process to remove degradation from seven decades on the seabed, will take up to 12 months.