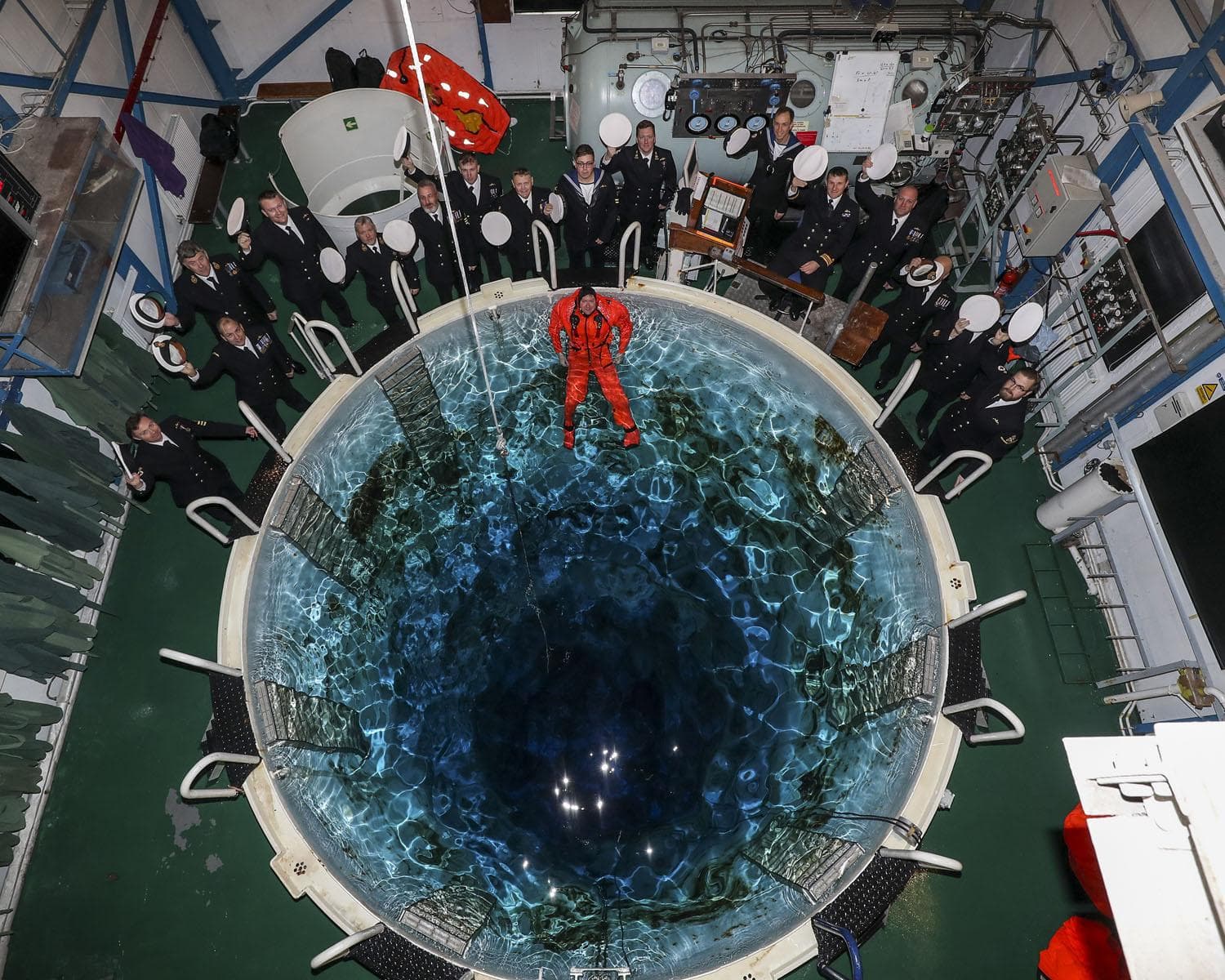 For the last time the team who teach submariners how to escape from a stricken boat gather at the Submarine Escape Training Tank in Gosport before the iconic structure closes.

Tens of thousands of submariners – not to mention freedivers during the period when it was open for public usage – have passed through the Submarine Escape Training Tank (SETT) since July 13 1954, when the first man ascended the 30m column of water to simulate emerging from a sunken submarine.

With the entire submarine flotilla moving to Faslane – as well as advances in submarine design, escape training and changes in the way rescues are handled – the SETT is no longer required.

The tower was built between 1949 and 1953 as part of a wholesale revamp of submarine escape training, prompted by a report drawn up by Captain Phillip Ruck-Keene just after World War Two.

The loss of HMS Thetis – on the eve of war – and HMS Truculent – sunk in the Thames after colliding with a Swedish tanker in January 1950 – both with heavy loss of life, as well as many other submarines accidents and experiences, played a significant role in the lessons taught.

Using the tank, submariners are expected to escape without breathing apparatus – they use a specially-designed escape suit to breathe as required.

Today the tank is just one element of the UK’s submarine rescue capability, which also includes the Submarine Parachute Assistance Group (who leap from aircraft into the water to help crew who’ve escaped from a boat as taught in the SETT), and NATO’s Submarine Rescue System ‘Nemo’, also based in Faslane.

The Royal Navy stopped pressurised ascent training in the 900,000-litre tank in 2012, but still uses the facility for non-pressurised drills and teaching.

In the SETT’s existence, only one British boat – HMS Artemis – has been lost (she sank at her moorings in an accident in 1971, ironically just a stone’s throw from the tower), without any casualties.

In its place, opening later this year, is the Submarine Escape Rescue Abandonment and Survival Training Facility (SMERAS TF). The team will be moving en-masse from Gosport to Faslane, leaving a skeleton team behind on the south coast.

“2020 marks the end of an era, so it’s a poignant moment for all of us,” said Lieutenant Commander Gareth ‘Griff’ Griffiths, in charge of the team.

“We’re looking forward to carrying the lessons of our past many years into the future of submarine escape, rescue, abandonment and survival training.

“Our success is due, in no small part, to our commitment to one another and the unique perspective of being submariners.”

At the heart of the replacement complex at Faslane is a huge ‘abandonment and sea survival training environmental pool’ where various weather conditions and sea states can be replicated in the safety of an indoor pool.

As for the SETT, it will be preserved as it is a listed building, protected by law for its national and international role in submarine safety.