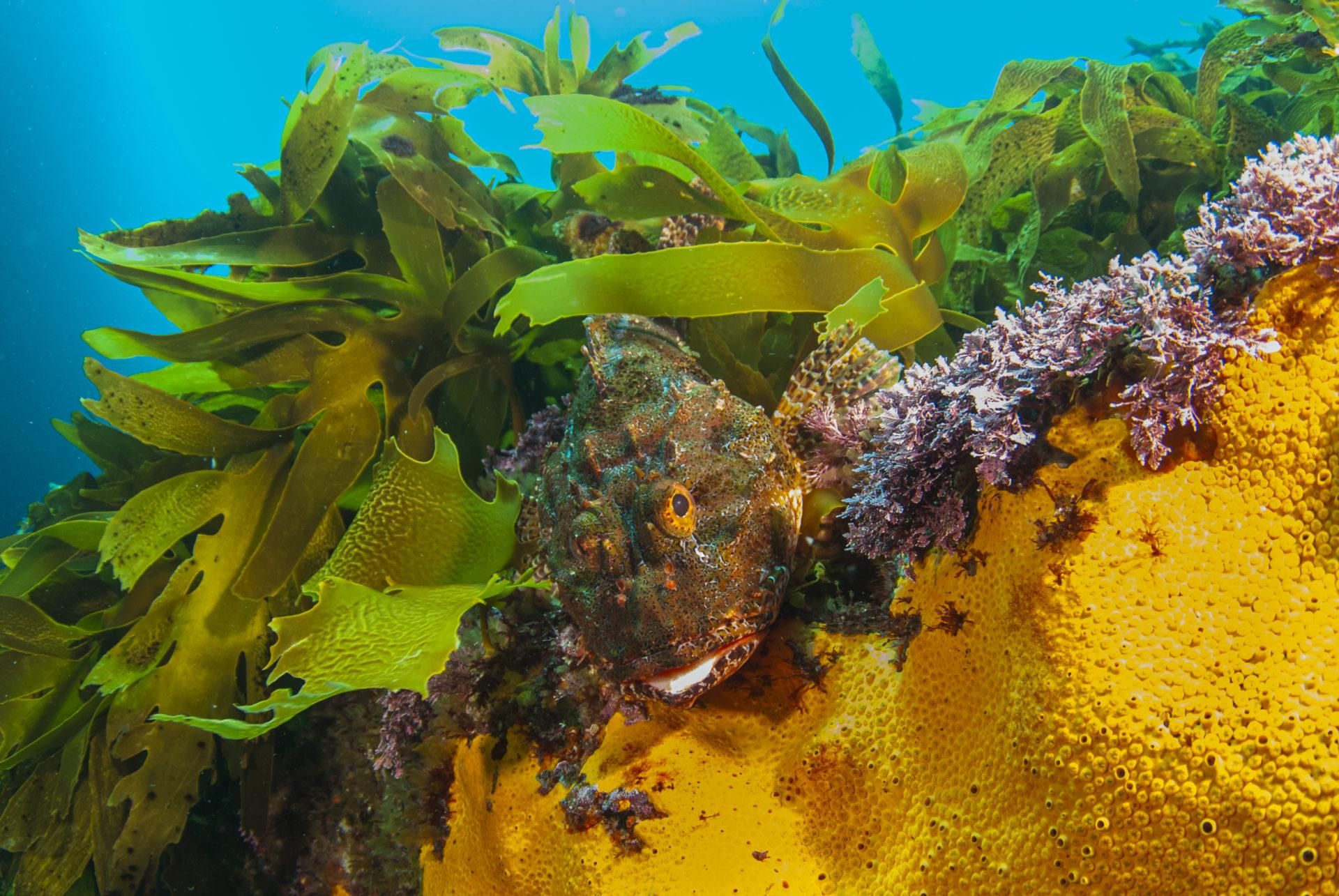 Nestled between the Coromandel peninsula and the northern lying isthmus of the main north island is a 4000km2 submerged plain. Covered by the Pacific Ocean around 7000 years ago at the melting of the last glacial age and joining the expanse of the Pacific Ocean via three main channels, the Hauraki Gulf lies protected by her outer-most lying ‘Barrier’ islands to the north, and the 80km long peninsula of Coromandel to the East.

This expanse of shallow sea is home to a sprinkling of islands, each easy to reach and offering many diving possibilities enabling easy diving regardless of the sea state or wind direction.

With too many dive sites to list, the following are a few of the great dives that the Hauraki Gulf has to offer.

The Hen and Chicken Islands

Named by James Cook (for unknown reasons), these islands lie 10 nautical miles off Bream Bay. Hen Island Scenic Reserve (also known as ‘Taranga Island’) lies southernmost in the group, with a collective formation of 6-smaller islands (the Chickens, or Marotere Island chain) further north. The Hen herself is remnant of a 4-million-year-old volcano, as are many of the islands within the gulf.

With deep, blue waters surrounding her and 360-degree options of cover from prevailing seas and winds, Wahine Bay on the southern side of the Hen is an easy option with a broad textured rock bottom stepping down to the 45m sandy floor of the Hauraki Gulf.

RMS Niagara (the so called ‘Titanic of the Pacific’) was sunk nearby with a belly full of gold in 1940 to a German laid mine. She still lies in 120 meters of water nearby with a reputed 5 ingots of unrecovered bullion, eliciting a perpetual cycle of unrealistic ambitions to any self-aggrandising members of the New Zealand diving community.

A prominent feature immediately to the south of Hen Island, Sail rock juts from the ocean and provides yet another rewarding dive location.

She stands shear-sided in 45 meters of water with a surprisingly textured wall below the water. Rich with cracks and kelp-covered, this is a constant favourite with a big blue-water feeling to her. A sometimes ‘adventurous’ dive entry and a keen-handed boat captain are required to deposit divers to the appropriate side outside the current and close to the rock wall.

A remarkably rewarding garden tucked into a slab plateau on the northern side is the safety stop location of choice. The much-depleted Crayfish of the Hauraki Gulf (now declared ‘functionally extinct’) can still occasionally be found peering back from deep recesses within the rock.

Schooling Maomao, Porae and attendant Kingfish idle on the currents at the periphery of the rockface. Sail Rock has a ‘big-blue’ dive feeling to her and is a guaranteed favourite.

100km north from Auckland city is the Mokohinau Island group of the Hauraki Gulf.

A clustered collection of shear-sided islands, that serve as a wildlife preserve for some of New Zealand’s lesser-known terrestrial species and free from human habitation, these islands are a chain of volcanic stacks standing on the edge of the continental shelf.

Complex and textured islands, these are a popular location for fishing and day charters, and offer a myriad of bays and sea-cliffs to find shelter in. With an almost ‘Avatar-esque’ quality of vertical rock rising from sheltered coves, the Moke’s can be trying and exposed to get to, with the nearest port being 50 kms due west (locating the islands a further 28 kms offshore from the Hen and Chickens).

For the effort in crossing an exposed expanse of water to get there … the rewards are an almost inexhaustible choice of diving on rocky shelves to a white, sandy bottom below.

Just 1400m from shore and 40kms north of Auckland, is one of the largest and oldest human-inhabited islands in the Gulf.

Kauwau Island has had a checkered past, and at various stages of Victorian governance was responsible for importing some of New Zealands most famous (and infamous) non-native species. The Bourgeois ‘Mansion House’ and garden is a popular landing spot for boat trips upon arrival and presents a grassy open space amongst the wandering Peacocks (you read that right) to enjoy a protracted surface interval or extended lunch break.

Red Moki, Snapper and Eagle Rays abound in the surrounding kelp gardens on the Northern side of the Island. Shallow waters and a gentle descent into the channel also make this a great location for less than expert dive groups but entertaining and complex enough biologically to hold the interest of the experienced.

The Tawharanui Peninsula Marine Reserve is a short 2 nautical miles due North, inviting an ideal alternate location. Several smaller islands (such as Motuketekete, Takangaroa and Flat Rock) immediately adjacent offer varied shallow diving options to pick around the rocks in 10m of water or less, and again are easy alternate locations within reach.

An extinct Volcano, steep sided and Jurassic in appearance she rises almost symmetrically on all sides to 720m above the surrounding Jellicoe and Craddock channels of the Hauraki Gulf. She is the southernmost of 3 ‘sister’ volcanos and protects the Hauraki Gulf from the brunt of the Northerly flow of the Open Pacific Ocean beyond.

New Zealands first nature reserve and unspoilt by human habitation for over a century, Little Barrier is an arc to threatened birdlife, and sits in a warm-moist flow of air, precipitating a rising cloud forest at her crown. On a moody day the Eastern face, mist-draped ascends from the water to a low cloud ceiling on the island top and could easily be the set piece for King Kong’s ‘Skull Island’.

The Eastern shoreline is a favourite site to spy on breeding Hammerhead colonies amongst the shallow rock plates that step down to the sandy floor of the Hauraki Gulf below. The ubiquitous Bat-Eagle and Sting Rays hunt the shallows here for Crayfish and the Kina (sea urchins) population are in held in check with a healthy balance of biodiversity.

Known to the locals as ‘Tiri’, this small island sits 2 nautical miles from the suburban Whangaparoa Peninsula and is a 15-minute boat ride from the Hauraki Gulf Harbour Marina.

Deemed an ‘open sanctuary’ (meaning able to be visited by the public), this island is a popular fishing location and offers up several small semi-submerged islets (such as Shearer and Shag rocks) a short distance further east.

These features stand in 30-odd meters of water and are functional up-welling’s for the domestic species of finfish of the region. Although worked hard by local fishermen, there is usually a surprise to be had by the odd Kingfish or Bronze whaler shark. Small populations of New Zealand fur seals can be seen basking on the exposed rock occasionally, and this inner Hauraki Gulf area is the best place to spot the occasional little (or ‘fairy’) penguin.

The best in this collection is last. Great Barrier Island.

The sixth largest Island of New Zealand and lying 8 nautical miles off the Northern tip of the Coromandel Peninsula, Great Barrier Island offers a marine eco-system no longer viable within the inner Hauraki Gulf.

Sparsely populated, but with some amenities for visiting boats and campers, the island is the marine equivalent to a step back in time. An inexhaustible amount of diving lies along the entire western length of the island with sheer cliffs rising from the ocean in an uncountable number of bays and rock walls. Weather permitting a transit to the northern most tip, ‘Needles Point’, will yield truly amazing diving but in a very exposed sea, and a long way from any assistance.

This is expedition style diving, amenities not far from shore. The Island boasts some of the country’s best spearfishing (which is always a solid indicator of marine health), and even has a regular flight service from Auckland’s North Shore aerodrome.

This is the kind of underwater landscape you see when you close your eyes, rich and teeming with life. Far enough from the mainland to be unaffected by run-off (and therefore atypically clear visibility), the cool waters invite deep sea pelagic species close to the surface and set up an interaction between predator fin fish species and schooling fish.

If I could only dive one location for the rest of my days … this would be it.

The Hauraki Gulf (in general)

The Hauraki Gulf sits at the southern most turning point of the South Pacific Gyre (and therefore the East Australian Current).

Although under constant stress from the explosion of human habitation along its fringes, the northern most and outlying areas have an abundance of marine life. Ocean temperatures, while rising in trend, qualify as ‘temperate’, with summer water temperatures typically 23°C, and winter water temperature as low as 13°.  Winter diving is best done in a dry suit, although a solid semi-dry is adequate year-round. A 5mm wetsuit will serve briefly in the summer peak of February – March, although I would still recommend a hood.

New Zealands waters are home to a rising number of Marine mammals, and there is a well embraced public spirit to protect and enjoy these, with the Department of Conservation being an active participant in their welfare. As such, there are scripted rules to interacting with these species to be observed by all.

Want to read about more great places to dive in New Zealand?