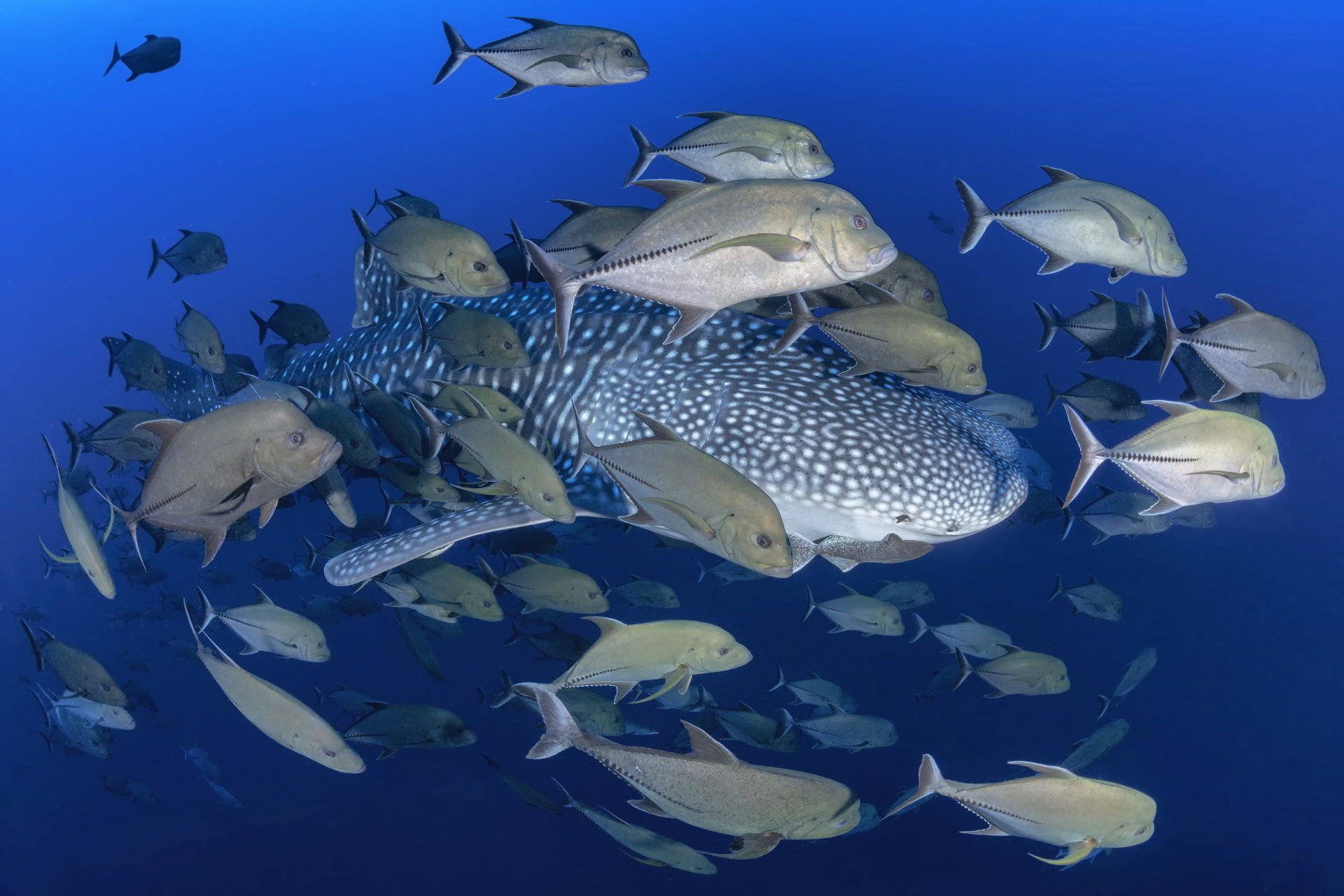 Socorro is a true “bucket list” adventure if ever there was one! This group of four islands is located in the Pacific Ocean, some 600 kms from the west coast of Mexico. And it offers some quite unique underwater experiences and is almost synonymous with giant oceanic manta ray encounters.

Often referred to as the “Mexican Galapagos” these islands are so special that in July 2016 they were inscribed as a UNESCO World Heritage Site. Then in November 2017 the government of Mexico created North America’s largest marine protected area. And made the whole area a national park with total bans on fishing, mining and tourism development.

Confusingly though, Socorro is actually just one of the four islands that make up the Archipiélago de Revillagigedo – the correct name for this location…

However, most English-speaking people struggle with actually pronouncing Revillagigedo. So, the pragmatic Mexicans stopped trying to use the formal name with most foreigners and refer to the archipelago as Socorro.

Semantics out of the way… just why are these islands quite so special? The answer to that question is really quite simple – location!

The four islands of San Benedicto, Clarion, Roca Partida and Socorro are actually the peaks of underwater volcanoes.

Which, in turn, are part of a submarine mountain range far below the surface. The overall location is where the north-east Pacific Ocean marine biogeographic region converges with that of the Eastern Pacific.

It is also where the California Current meets the Equatorial Current. All of which creates an incredibly complex and highly productive transition zone.

Being the only landfall in such rich waters the four islands have an incredible mix of resident sharks, manta rays and dolphins. Plus, they act as beacons to migratory species such as humpback whales and whale sharks. Little wonder then that the area is renowned for being a “big animal paradise” …

The sheer remoteness of the Revillagigedo Archipelago means that diving Socorro is not something to take lightly… Just getting there is an adventure in itself!

For North American divers it is not too bad as all the liveaboard dive boats servicing Socorro operate from Cabo San Lucas. The major resort city on the southern tip of Mexico’s Baja California peninsula.

Known for its beaches, sea-sports, and nightlife Cabo (as it is commonly referred to) is a busy place that is very well serviced by all the major US airlines. For the rest of the world some long-haul flights are required and for us Australians it is a journey of epic proportions!

Getting to Cabo is just the first part of the overall journey though as it is another 24 hours by boat to get to San Benidicto Island, the nearest of those four islands to Mexico.

Formerly known as Isla de los Innocentes, San Benedicto at some 10 km², is the third largest of the four islands in  the archipelago. Very much volcanic in origin, it has no source of fresh water and is completely uninhabited.

San Benedicto is visually striking and has two very prominent features. Bárcena, near the southern tip of the island is the volcanic crater left from its eruption in 1952. Viewed from sea level Bárcena is impressive but viewed from a drone it is simply awesome!

Secondly are the volcanic arch and nearby pinnacles on the west side of the island. Which when viewed up close are truly awe inspiring…

There are a number of dive sites around San Benedicto – such as Fondeadero and the Canyon. They are good, but none of them comes close to “El Boiler” – which is located near to the volcanic arch and is an absolutely incredible dive!

The site consists of a huge pinnacle that rises up from the seabed at 45m, coming to within 4m of the surface. That top area is to be avoided because of surge and swell. But the rest of the site is straightforward, and you basically just choose your depth and then make your way around the pinnacle.

El Boiler is a tremendous place to encounter oceanic manta rays as they use the pinnacle as a cleaning station. The amazing thing about the giant mantas is that they are quite used to divers… And being intelligent and curious creatures, they will often initiate the encounter and come to you!

So the best way to dive El Boiler is stay relatively shallow to conserve air. Then make your way around the pinnacle, watching out for the mantas. Obviously there is no guarantee they will appear…

But they usually do and when that happens, try to separate yourself a bit from other divers and wait. There is simply no point in trying to chase them – they are just too fast. Better to let them come to you!

While the oceanic manta rays are very much the stars of the show at El Boiler, the dependable co-stars at San Benidicto Island are the resident population of silky sharks (Carcharhinus falciformis). Clearly very used to the liveaboard dive boats that visit the island, the silky’s gather in some numbers around the boat looking for scraps.

Relatively large animals, with an intense curiosity and bold attitude, silky sharks are considered to be potentially dangerous.

Socorro is by far the largest of the four islands at some 132 km2. It is an impressive sight when first seen, particularly so from a drone!

It is also the only island that is inhabited, albeit by about 250 Mexican Navy personnel and their families… Their role being to enforce the rules and regulations of the marine protected area and national park.

There are three main dive sites around Socorro Island – Punta Tosca, Roca Oneal and Cabo Pearce. The first two are certainly interesting dives, but Cabo Pearce is very much the main attraction and its stars are ocean manta rays and bottlenose dolphins! Plus, schooling hammerheads are often seen out in the blue.

Cabo Pearce is a long “finger” formation that is located on the eastern side of the island and was created by lava flow from when Socorro was an active volcano. Underwater that finger extends right out in to the deep surrounding waters.

Care is required at Cabo Pearce as strong currents run either from the south to the north, or vice versa… Which strengthen as they sweep across the top of the underwater part of the lava finger.

Both the oceanic mantas and bottlenose dolphins are used to interacting with divers and will come to you. Which makes for some really great encounters!

Located about 100kms to the west of Socorro Island, Roca Partida is the visible tip of a huge underwater mountain. It is hard to imagine a more remote, awe inspiring and exciting dive site!

Compared to the three other islands Roca Partida is pretty small. Just 100m long and 8m wide and the name means “Split Rock”. Which refers to the two peaks on the rock – one 25m high and the other 34m.

Its sheer and complete isolation means that Roca Partida has its own ecosystem and resident population of marine creatures. Plus, it naturally attracts migratory animals and you just never know what may appear around the corner!

Swept as it is by strong easterly currents Roca Partida is best dived by entering the water around the middle of the rock on the east side. Which is the “split point” for the current and where the water velocity is minimal.

Then its a choice left or right to the corners of the rock, where the current is strongest and the action is pumping!

Huge schools of fish pulse in the current, sharks are a constant presence and the chance for random pelagic encounters make the corners of Roca Partida an incredible underwater experience!

Finally… a really interesting feature of Roca Partida are it’s snoozing whitetip sharks. Located on the eastern side of the rock are several recesses that act as “shark platforms”. These are where the resident whitetip sharks, which hunt at night, gather during the day to rest.

Seemingly safe in numbers, the recesses are often crammed to overflowing with whitetips…

The four islands of the Archipiélago de Revillagigedo are truly very special. While only three of the four are dived regularly – Clarion Island is another 290km to the south-west of Roca Partida and very few boats go there. Diving Socorro, San Benidicto and Roca Partida is an experience that will stay with you for many years.

The combination of their remote location, exceptional biodiversity, incredible encounters and exciting diving are hard to match – anywhere…

In more normal times Don is based from Bali in Indonesia, but is currently hunkered down in Sydney… His website www.indopacificimages.com has extensive location guides, articles and images on some of the best diving locations in the Indo-Pacific region and “big animal” experiences globally.