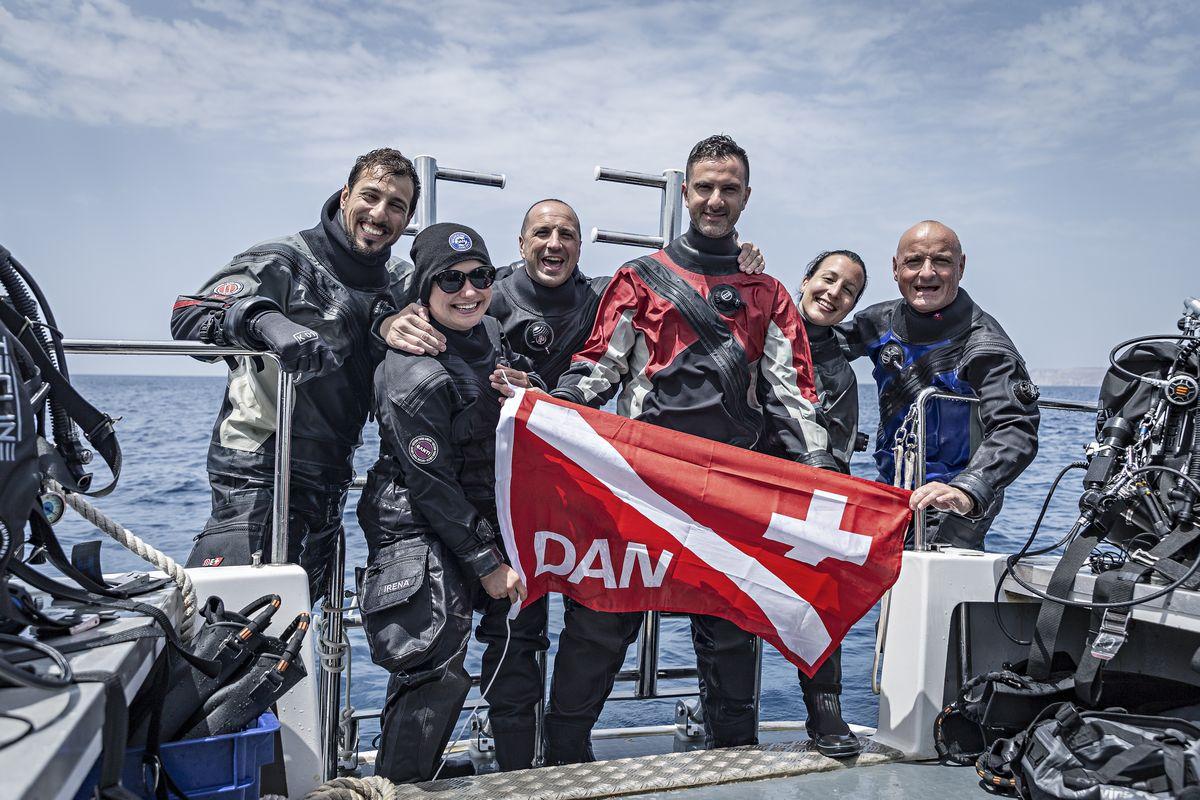 Many divers know these three letters – DAN. The acronym stands for ‘Divers Alert Network’, and its European branch, founded in 1983 by Prof Alessandro Marroni, just celebrated its 35th anniversary. Here is an opportunity to put this organisation dedicated to underwater activities, and whose skills extend well beyond its well-known insurance, under the spotlight.

All over the world, everywhere at sea, its red and white flag waves. DAN is a large non-profit organisation, one of a kind in the diving sector. Its European branch, founded by diving and hyperbaric physician Alessandro Marroni, is celebrating its 35th anniversary this year. While we are familiar with its insurance and often convinced of its effectiveness when we are unlucky enough to have to use it, we are often unaware of the many fields of action of this global organisation, which have to do, in particular, with scientific research and first-aid education.

One may be unaware of this, but each DAN member contributes about two euros to the organisation's research budget. In addition to this, there are also public grants, as DAN Europe is officially recognised as a research institute, involving doctors, academics and researchers. Together, they work to understand the physiological phenomena regulating diving, to prevent accidents and, when necessary, to treat them in the best way. In practical terms, this work has an impact on the way we dive in everyday life: “Various decompression procedures evolved following research studies conducted by DAN. Consider Patent Foramen Ovale (PFO), which is no longer considered an absolute contraindication to diving, or studies related to flight after diving… Research conducted on divers also contributed to a better understanding of mechanisms related to oxidative stress, and this has been used with hospitalised patients,” says Prof Costantino Balestra, Vice-President Research and Education at DAN Europe. Diabetic divers, decompression sickness in freediving, immersion pulmonary oedema, narcosis, PFO, genetics, effort, nutrition, psychological profiles… none of these topics escape the scrutiny of scientists, whether they analyse data from the field or perform laboratory tests. 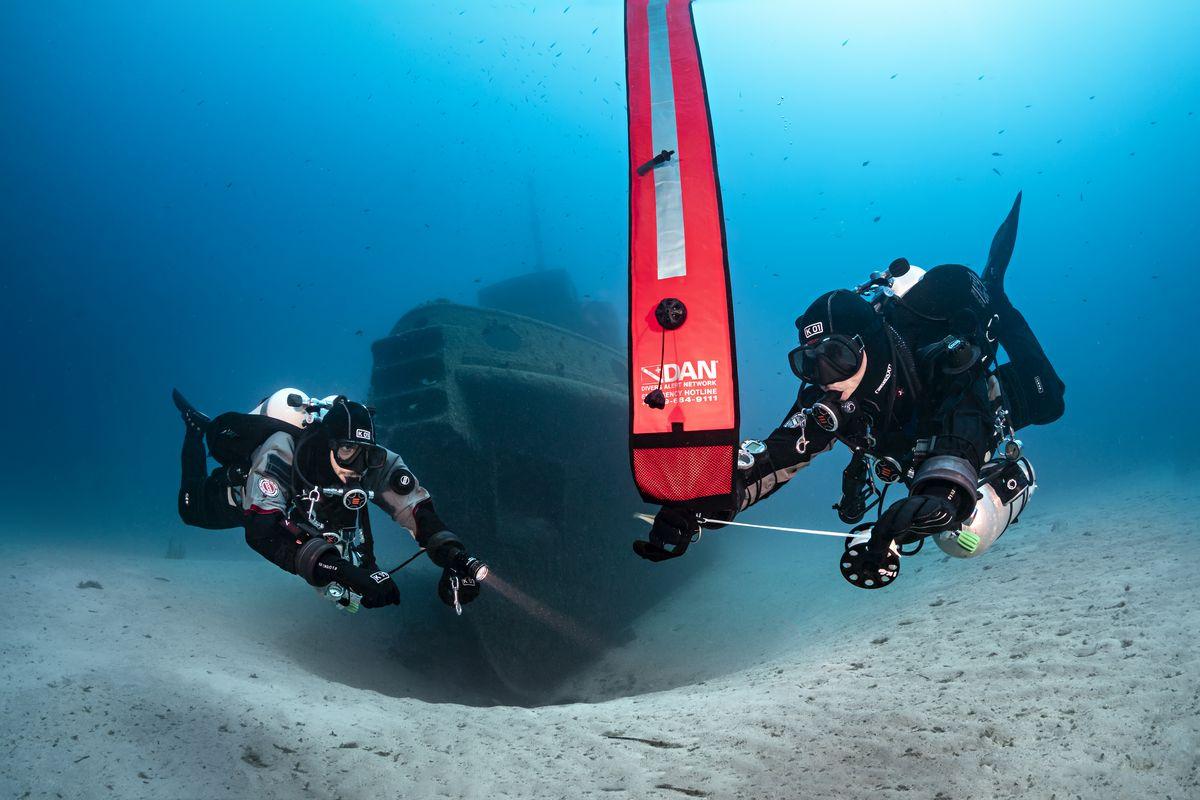 DAN Europe currently boasts more than 150 publications on breath-hold diving, scuba diving, gas mixtures and more in general, human reaction to extreme environments. “If you can do something underwater, you can do it everywhere: at altitude, on the Matterhorn or Everest, as well as in space,” explains Alessandro Marroni. This is why DAN regularly takes its head out of the water to collaborate with the European Space Agency and Altec, a subsidiary of Thales Alenia Space, particularly on the issue of remote monitoring of occupants in the International Space Station. “My dream would be to use all these experiences, what we learned and understood from our research, to develop wireless diving equipment that would not only keep track of risks of decompression sickness in real time but also transmit information about saturation and desaturation, as well as all physiological signals, to a system that would anticipate assistance needs. As with 112, this would be a two-way technology, able to geolocate the diver and provide recommendations. A prototype, a connected garment capable of controlling blood sugar, and linked to an algorithm, will soon be launched.” The culmination of a career? Nothing is definitive in science. Even etymologically, research is never finished, says the researcher. The extensive data we have been collecting over the years start to make sense, but it would be arrogant to talk about certitude. Our database has now more than 100,000 real dive profiles, plus medical data on the production of gas bubbles. Their analysis enabled us to publish a study on Frontiers* and to make safety recommendations regarding decompression algorithms. However, to refine our results, we need more data. In the field of breath-hold diving, we also have exciting information about pulmonary oedema in freedivers. Certain factors, including genetics, seem to facilitate its occurrence. We observe, for example, that people from Tibet or the Himalayas, are practically immune. We are also developing an algorithm to avoid decompression sickness in freedivers. It seems that the depth and duration of the dive are not so critical as the time spent at the bottom…

These teachings can save lives

Aware that knowledge only makes sense when it's shared, people of DAN Europe developed training courses open to all, including those who never put their heads underwater. “DAN training was created by doctors and is based on research, with the aim of ensuring the injured diver receives the best treatments, limiting the after-effects, and improving quality of life. We believe that everyone – dive buddy or family member –  can carry out an initial assessment in the proper way, on time. This is of the utmost importance,” explains Chantelle Newman, DAN Instructor and Area Manager for the UK. “Our courses are created according to international standards. One of the most important aspects of first aid is the identification of neurological symptoms in DCS cases. Among victims, denial is widespread, and it is even more so when you find yourself on a safari boat, where properly intervening could mean interrupting the holidays of some 20 people. Recognising the symptoms and administering oxygen gives amazing results.”

In addition to its training courses for companies and professional first aiders, DAN offers nine basic courses for individuals. Some of them deal with general first aid, from the management of bleeding to use of a semi-automatic defibrillator. Some others are related to administration of oxygen, declined in several modules. In addition to these, there also is the famous ‘on-site neurological assessment’ and a course addressing injuries due to marine life. “These teachings can save lives,” concludes Chantelle. 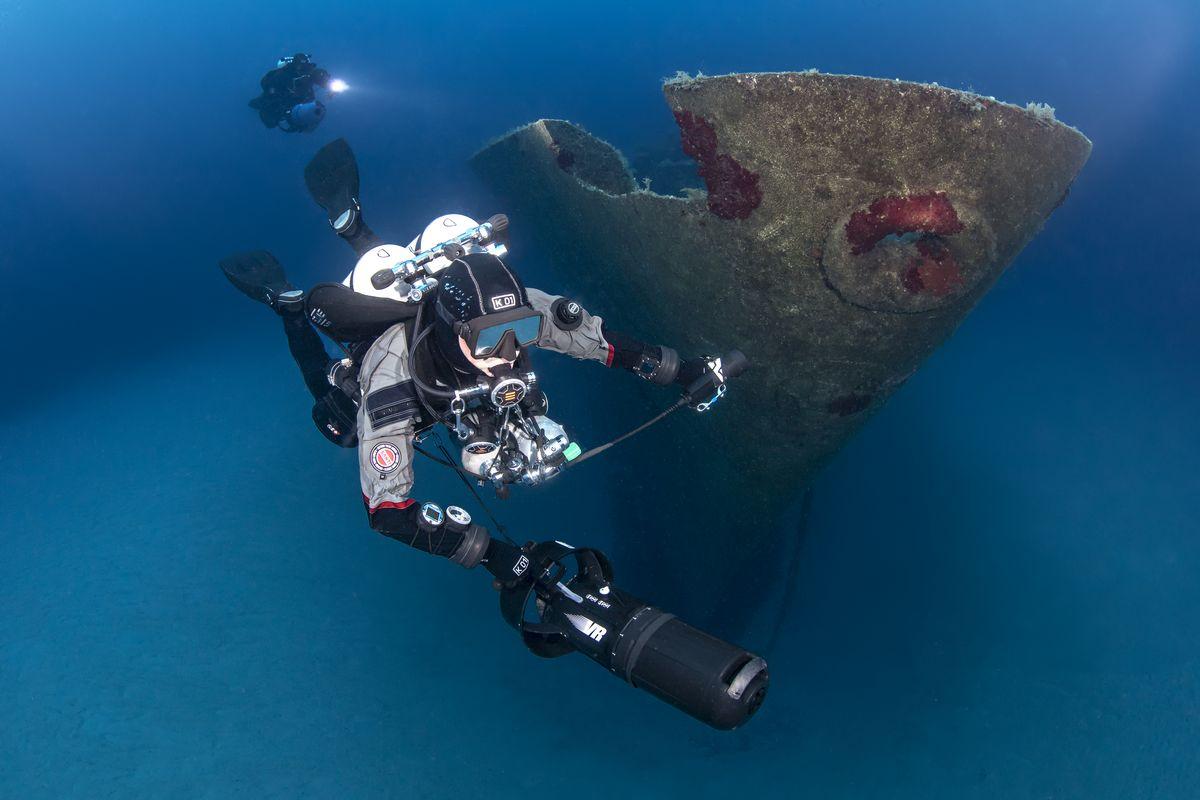 His motto is written on a small Mickey Mouse on his desk – ‘If you can dream it, you can do it’. The sentence is from Walt Disney, and Professor Alessandro Marroni, the founder of DAN Europe, is working every day to apply it, literally. An avid diver since the age of eight, diving instructor since 1964 and physician since 1971, he wrote his thesis on diving medicine ‘at a time when such a discipline did not exist yet’. Firmly determined to work in the field, he specialised in commercial diving and became medical director of underwater saturation works for Saipem Group between 1972 and 1985. From the clean-up of wreckage loaded with toxic barrels to the supervision of Jacques Maillol's freediving record at 86m, Alessandro Marroni quickly made a name for himself in what at the time was only a niche. “My mission was to assist professional divers, 24 hours a day, wherever they were. As diving activities became more widespread, I found it natural to develop similar concepts for recreational divers,” he recalls. At the same time, a US counterpart, Dr Peter Bennett, came up with similar reasoning. The idea to create DAN came in the same year, 1980, in the United States and Europe. Peter Bennett created Léo-Fast, supervised by the US Air Force, then Divers Accident Network. At the same time, Professor Marroni created International Diving Assistance in Italy, which then developed in Europe. The concepts evolved jointly until they merged around a common identity, the Divers Alert Network. Later on, other sister organisations joined the international DAN: Japan, Asia-Pacific, and South Africa. 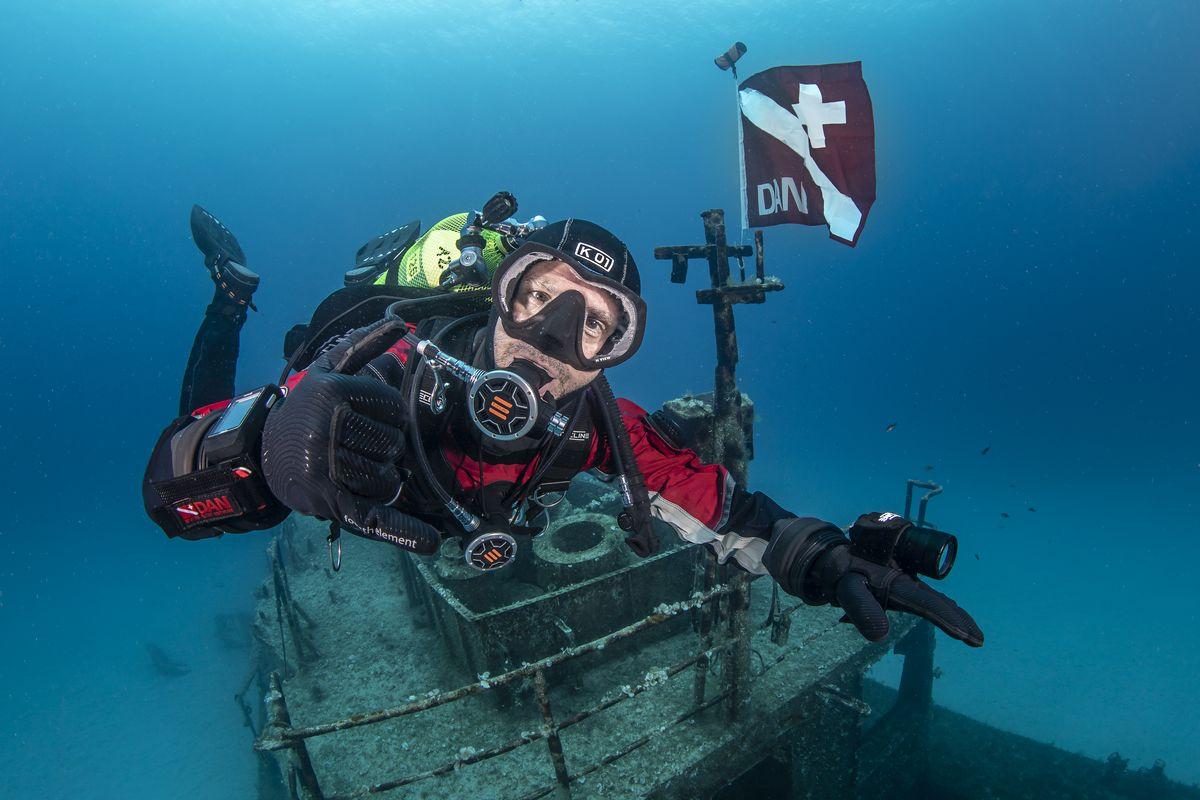 Insurance: Behind the scenes

Headset on her head, comfortably installed at her desk, Marta Marrocco switches easily from Spanish to French or Italian, and then to English when her emergency call ends. This former diving instructor now holds the crucial position of Case Manager, as part of the assistance provided by DAN Europe for its insurance. “I act as the liaison between the emergency call centre, hospitals, local hyperbaric centres and the insured diver, wherever he or she is in the world, and whatever the medical problem he or she is facing,” she said. This service is accessible to divers 24 hours a day, 365 days a year. One to five decompression sickness (DCS) cases is managed each week, but more often, it's about barotraumas, infections…

What happens at the other end of the line, when, while on holiday, we contact DAN for DCS symptoms? “An operator enters the details of the claim into the system. His message is read by several people: the emergency centre, one or more doctors from DAN, the claims department for all matters related to the reimbursement of expenses, and myself. Then, a doctor who speaks your language gets in touch with you,” said Marta. Assistance continues during the acute phase of the accident, providing expert recommendations to the local medical staff, then passes the baton to the reimbursement department. A significant part of insurance – no matter how bad we consider our health system, we are not aware of the costs generated by hospitalisation abroad! This is why it is essential to do whatever possible to watch your health during a trip. Because if you appreciate the effectiveness of insurance when you need it, it is even better never to have to use it! 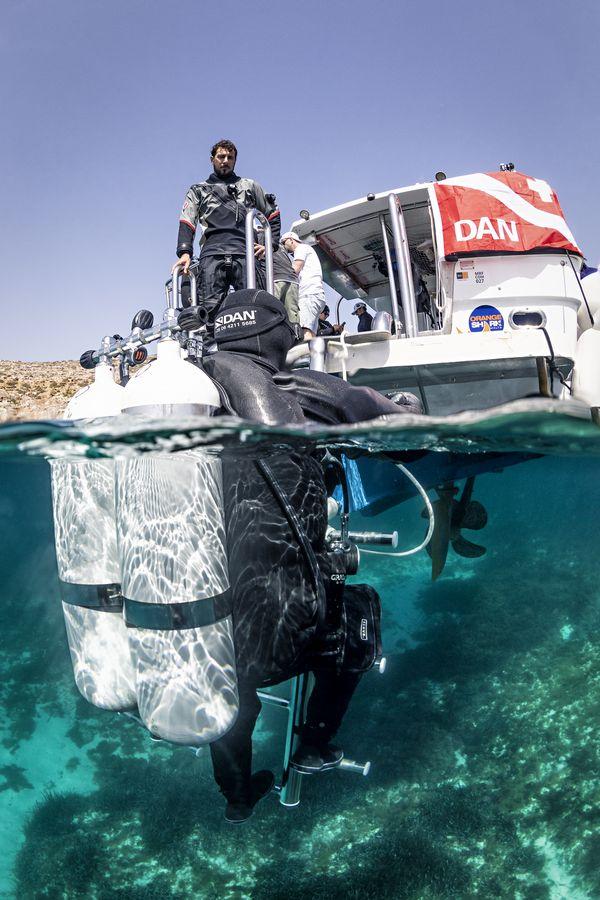 Better to lose a dive, than life

“Most accidents happen because we are in too much of a hurry,” warned Marta. People wait all year round for their week in the Maldives, the Philippines or Indonesia, and after a flight of 14 to 17 hours, tired and often dehydrated, they start repetitive dives. They mistakenly believe that their computer or nitrox will protect them from accidents, which is of course not always the case. However, some small, far-away paradises sometimes require two to three days for a medical evacuation, or to be properly treated… This is why we always recommend being well insured when travelling. And to not surrender to the ‘I’m tired, but I paid!’ logic, or to peer pressure from friends or dive buddies. You must be well hydrated, aware of your training and experience level, attentive to any symptoms, and aware of the safety equipment available on site. Learn when it’s time to say ‘no’. It is better to lose a dive than to lose a life.

You can find our more about DAN and their diving medical research and insurance here.