Destination of El Quseir in Egypt 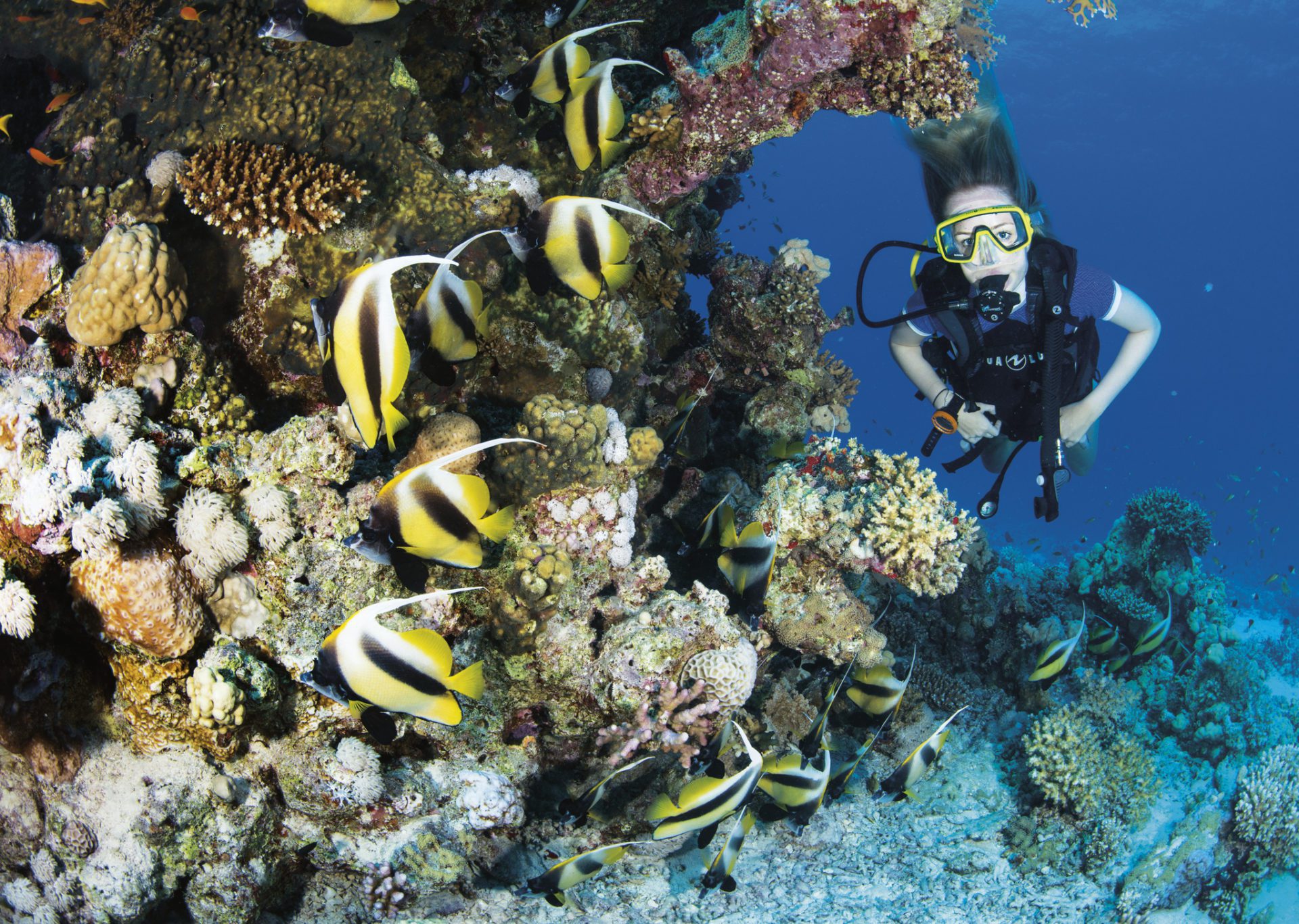 Stuart Philpott is a virtual regular at the off-the-beaten-track destination of El Quseir in Egypt, and here he sums up the appeal of this hidden gem

Nestled between the bustling tourist resorts of Hurghada and Marsa Alam is the ancient port of El Quseir. In comparison, daily life is much quieter and far less commercial, more in keeping with old-style Egypt. Since my first visit nearly a decade ago, I have been summoned back more times than I can remember. My last trip covered the Miss Scuba UK finals and as part of the experience, the four girls were invited along to the primary school, meet local dignitaries and get involved with beach clean-ups as well as learn the art of underwater modelling. I actually got to see a different side to El Quseir, one showing a strong community spirit with traditional values.

Scuba diving has to be the top activity with a huge variety of shore and boat diving sites on offer, including caverns, drop-offs and coral gardens. Accommodation is not as plentiful as the other major tourist destinations, but there is still a reasonable selection of budget camps, two- and three-star hotels and all-inclusive five-star luxury resorts to choose from.

The Mövenpick, Flamenco Beach and Radisson Blu resort hotels are located to the north of the main city centre. A few km still further north is the ever-popular Roots Camp owned and managed by Brit couple Steve Rattle and Clare Meadows. Moving south there are a number of smaller hotels, including the Fanadir. Extra Divers are resident at the Mövenpick and Subex at the Radisson Blue. There are also a number of independent dive centres operating around the harbour area.

Getting to El Quseir

Getting there couldn’t be any easier as both Hurghada and Marsa Alam receive direct flights from the UK. Some airlines are even laying on additional flights this coming winter. Marsa Alam is probably the best choice as the airport is much closer (approximately 70km) with a transfer time of around one hour. Hurghada is twice the distance but offers a broader range of flights, including Easyjet, Egyptair, Thomson and Thomas Cook. If transfers are not included in the package deal, it’s a case of haggling with a local taxi driver, but make sure the price is agreed before leaving. The main Highway 65 reminded me of something from a Mad Max movie set. It’s just a long, straight, desolate stretch of tarmac with nothing but rolling sand dunes on one side and sparkling blue sea on the other. Having experienced the seat-gripping journey several times, I’m sure that most Egyptian drivers think they are playing a part in the movie.

Most of the coastline is one giant shore-diving site. The only real restriction is gaining access to the shoreline and, in some cases, clambering across the fringing coral reef. My very first dive was at a site called Serib Kebir, which has a labyrinth of caverns to explore. We kitted up under a shaded area on the sandy beach and then just waded in. I was guided around the coral wall to a gloomy-looking entrance. The cavern system turned out to be far more elaborate than I had expected. Sunbeams broke through the coral ceiling reminding me of laser lights in a nightclub. At times it was quite a tight squeeze through the rocky corridors, but some of the inner chambers were big enough for the whole group to fit inside. Good buoyancy and finning skills are essential otherwise we would have been immersed in a sand cloud. This was the ideal site to run a Cavern Diver course. Back in the blue I was followed by a school of 20 or more barracuda. The hard corals were in good condition but marine life was a little sparse. I had a quick look around the canyon and found a huge leopard ray buried in the sand. Frustratingly I didn’t have my camera and it was far too deep for a closer inspection.

After a few days of intense shore diving, it made a welcome change to jump aboard a day boat. At a site called Irg Lassal, we waited at least an hour for the waves to calm down but it was well worth it. The dive guide circumnavigated the big seamount in a clockwise direction. I was teased by two Arabian angels nibbling on the hard corals. I tried to get them both in the frame, but heavy surge kept throwing me off balance. The site was teeming with fish life from anthias and lionfish to coral grouper. I checked out three or four smaller pinnacles nearby and they were also awash with colourful corals and marine life. We went around the site twice and then started to ascend to the surface. I glanced back and there was a turtle staring right at me. The metre-long hawksbill was totally un-phased and not put off by our exhaled bubbles. In fact, the feisty character even started to munch on my camera dome. We spent at least ten minutes with the hawksbill. Most of the time I was rebuffing its advances, for once the turtle was just too close for my autofocus lens to lock on to.

Further up the coast we stopped at a site called Utopia, which just happened to be the reef directly in front of the Utopia Hotel. We got dropped off by the support Zodiac and drifted along the coral wall back towards the day boat. Maximum depth at the site was around 40m. I had set my camera for wide angle so was looking for bigger subjects. There was a nice-sized pufferfish but it didn’t stick around for very long. A non-moving giant clam shell was an easier target. Just before reaching the boat, we came across a small shoal of juvenile batfish and for once they weren’t camera shy.

El Quseir has a jetty but don’t expect to see a plush marina loaded with bars, restaurants and mega yachts. There are a few reasonable places to eat – El Ferdous fish restaurant is probably the most popular. Normally I visit with a big group of divers and we reserve a long table outside at the rear of the restaurant overlooking the sea. It’s a really nice atmosphere and they always serve up a great spread. Even the local cats come out to say hello!

Most of the beachside hotels have a house reef dive. At the Fanadir conditions weren’t the best, but at least I managed to get a feel for what was on offer. I walked across broken corals to the entry point about 30 metres off the beach. Boots are essential as the uneven corals are awkward to walk on, especially in full diving kit. The entry itself was quite novel and involves swimming through a cave. There is a line to follow, or if need be, grab hold of. This brought me out on to the open reef. The stirred-up sand had reduced visibility to around five or six metres. I could see a big boulder in front but this turned out to be a huge one-and-a-half metre turtle. It was obviously trying to take refuge from the choppy conditions. Throughout the rest of the dive my two guides acted as a spotters, pointing out macro subjects for me. These included scorpionfish, blue-spotted rays, crocodilefish, octopus and a selection of nudis.

Over the years I have managed to sample a variety of accommodation from dead plush to clean but basic. The award-winning luxury five-star Mövenpick is located a few km outside of the central hubbub. This was the first hotel to open in the area back in March 1995. They are usually busy all year round and have more than 50 percent repeater guests. One couple had returned a record 44 times! The hotel management describe divers as their ‘bread and butter’. This is a big, sprawling, family friendly hotel (200,000 sq metres) with numerous beachside bars, swimming pools and a white sandy beach with safe, shallow water.

Roots Red Sea is a popular choice for visiting UK divers. Joint owners Steve and Clare really do make everybody feel right at home. Over the past seven years I have seen Roots go through many changes. Each development phase has revealed another round of improvements. From what began as a few chalets and a main restaurant now includes an on-site swimming pool, bar/reception area, beachside restaurant and a shore-diving base. There are different types of accommodation to suit all budgets. I’ve always stayed in the chalets. They are clean and comfy with air-con, satellite TV, fridge, mini bar and an en-suite. Steve has always said that Roots is more like a club than a dive centre. In the evenings, everybody sits around chatting about diving and life in general – there might even be a guitar strumming. It certainly oozes a relaxed, chilled-out atmosphere.

Even though I am quite familiar with Roots house reef, there are always a few marine life surprises. On one occasion, I watched a big grouper preying on a pufferfish. The puffer had blown up like a balloon and was stuck inside the grouper’s mouth. After five minutes of stalemate, the grouper swam off behind the honeycombed coral wall so I didn’t get to see the outcome. Either way, I bet the grouper had serious jaw ache. This site is ideal for underwater photography, especially beginners. I have even taught one or two courses here in the past.

My favourite dive site has to be ‘The Rock’, which is about a 1km Zodiac ride from the main harbour jetty. Steve found and named the site a few years ago. We passed between two giant coral-carpeted sea mounts. From my vantage point above I could see bannerfish, grouper, puffer and a free-swimming giant moray foraging for a meal. A shoal of yellowtail barracuda cruised past us, probably en-route to The Rock.

Steve pointed out an isolated pinnacle surrounded by sand at a depth of 18m. It was awash with huge anemones, and the intense red outer casings really stood out in my camera strobes. There must have been around 300 to 400 anemones creating a vast field of activity across the sea floor. Each anemone had its resident clownfish family, domino damsels, shrimps and crabs. This attracted an army of predators starting with bottom-dwelling scorpions, stonefish, morays and octopus to mid-water trumpets, jacks, titan triggers and barracuda. After searching for about 15 minutes, I managed to find my ideal anemone and as if on cue, an octopus moved into the foreground just as I lined up for a shot. Click-click, with Clare in the background, blonde locks flowing and shining a torch beam at two posing anemonefish, the composition couldn’t have worked out any better. As a reward I even got a magazine front cover.

El Quseir might not be the liveliest place in the world, but after a hard days diving, a few ice cold beers and a tasty bite to eat, I was more than content. Maybe I’m just getting old! No doubt I’ll be heading back to El Quseir again sometime in the future, probably to cover another interesting and exciting storyline. Roots Camp is having its tenth anniversary birthday bash later this year, so if I needed an excuse this would do very nicely. One of Steve’s infamous beach parties will definitely stir up a sandstorm or two!